We were pleased to welcome Austrian filmmakers Gustav Deutsch and Hanna Schimek to RBSC today to view our collection of pre-cinema devices. Their first live-action film, “Shirley: Visions of Reality,” is showing at Princeton’s Garden Theater this evening. You should jump online and see if there are any tickets still available: http://princetongardentheatre.org/films/shirley-visions-of-reality

Taken from the website: “The film is one of those rare gems of artistic endeavour that defy categorization. Recreating 13 of Edward Hopper’s paintings, the movie charts over three decades of American history through the unfolding life of its protagonist, Shirley, a fictional red-haired actress who tackles the socio-political changes happening around her with the same fervour she handles her own personal affairs. Filtering history though the double lens of a contemporary painter’s viewpoint and a filmmaker’s re-interpretation of that viewpoint, in essence, Deutsch’s creation is a unique interdisciplinary art project presented as a feature film. 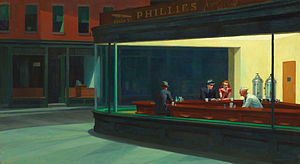 The film’s 13 scenes, each corresponding to a Hopper painting and extending to a period of six minutes either before or after the moment captured on that painting, are featured in chronological order from 1931 till 1963 with an introductory snapshot based on Hopper’s 1965 “Chair Car”. In these scenes—static tableaux vivants with little action or dialogue that take place on the 28th of August in the year the picture was painted—we glimpse through Shirley’s inner monologues and sparse lines to her partner, who remains silent throughout the movie, and the minor and major events in her life, we witness her playing the role of a bored blonde usherette in a movie, taking up menial jobs to secure her livelihood, retiring to the countryside and so on. In order to place each scene within a historical context, a radio news-broadcast precedes each scene depicting the Depression, WWII, the Cold War, Korea, JFK and Martin Luther King, all the way to Vietnam.”