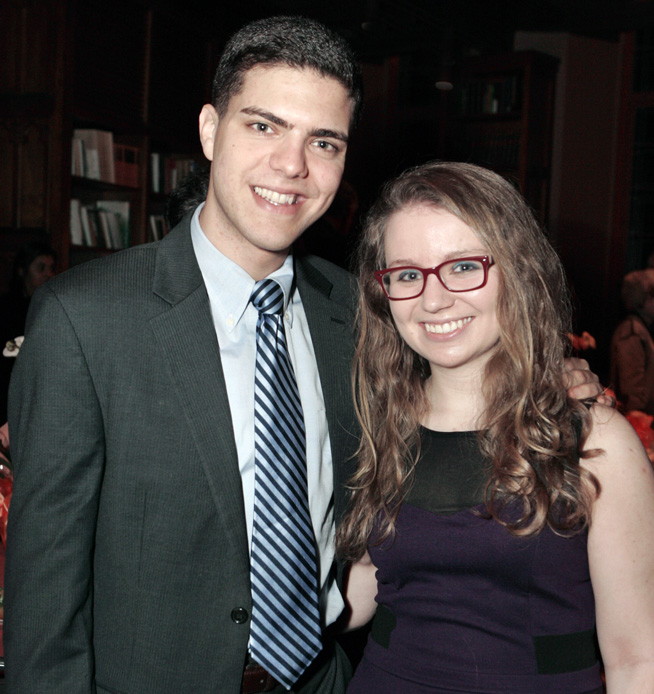 Jacob Scheer ‘2015 and Rory Fitzpatrick ‘2016 at the Friends of the Princeton University Library’s 2014 winter dinner.

The winners of the 2014 Elmer Adler Undergraduate Book Collecting Prize were announced at the Friends of the Princeton University Library’s winter dinner on January 26, 2014. The committee awarded first and second prize as well as two third prizes.

THIRD PRIZE was awarded to Jacob Scheer, class of 2015, for his essay “Stopping Climate Change: One Book at a Time.” In his essay, Jacob talks about book collecting as an environmental activist. Jacob likes to give hard-won volumes books from his collection away to young environmentalists in the interest both of sustainability and to inspire new readers. As he explains,

“I believe that this ‘revolving door’ book collection of mine could serve as a model for other social activist-book collectors… the best gift one can give is the gift of knowledge and I have never felt that as strongly as I do now that I have this powerful tool for creating social change.”

Jacob received a check for $1000 and the book The Two-Mile Time Machine: Ice Cores, Abrupt Climate Change, and Our Future by Richard B. Alley.

THIRD PRIZE was also awarded to Noah Fishman, class of 2016, for his essay “Collecting Tunes: My Musical Passport.” Noah collects volumes of folk tunes from all over the world in order to learn, perform, and experiment with the music. In his words,

“My collection of tune books is my musical passport. It gives me license, resources, the inspiration to dive into melodies from different cultures, and no matter how often I flip open a book of tunes, there’s always something new for me to discover in my collection.”

Noah received a check for $1000 and the book The American Popular Ballad of the Golden Era, 1924-1950: A Study in Musical Design by Allen Forte.

SECOND PRIZE went to Kamna Gupta, class of 2014, for her essay “Pour aimer comme l’on doit aimer: a musical autobiography.” Kamna, who is herself a conductor and composer, collects sheet music. In her essay, she quotes a French choral piece to capture the essence of his collection (Kamna’s translation): “And to love / The way you’re supposed to love / When you really love, / Even in a hundred years, / I will not have the time, I will not have the time.” She explains that “This song never was about the limit of time, but rather about the abundance of wonderful things in the world, so much so that even in one hundred years we cannot truly appreciate all of them.”

Kamna received a check for $1500 and the book Unsung Voices: Opera and Musical Narrative in the Nineteenth Century by Carolyn Abbate.

FIRST PRIZE was awarded to Rory Fitzpatrick, class of 2016, for her essay “The search for the shape of the universe, one book at a time.” Rory has accumulated a 200 titles-strong collection of science-themed books ranging from fiction to biography. It is complemented by a small collection of scientific instruments that includes an abacus, various slide rules, a compass, a scale, and a sextant. In her essay, Rory says what drew her to the topic is that

“there’s character development as we define principles and axioms, then the plot rises as you start to make calculations…. Sometimes, you begin to see where the plot is headed…but other times, the result can sneak up on you… and suddenly, your picture of the world is a little more complete.”

Rory received a check for $2000 and the book The Mathematical Career of Pierre de Fermat, 1601-1665 by Michael Sean Mahoney (updated 2nd edition, which covers the solution to Fermat’s Last Theorem).

Congratulations to all our winners.
Regine Heberlein, Administrator of the Adler Prize and Processing Archivist, Rare Books & Special Collections Department