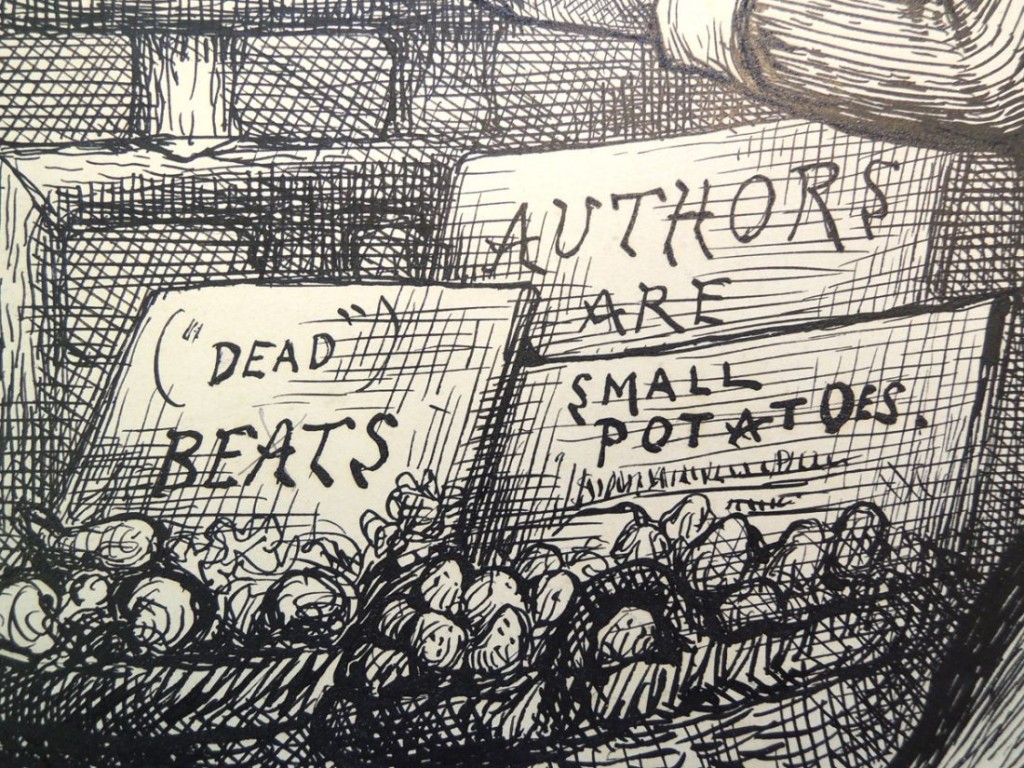 Thomas Nast’s illustration in Harper’s Weekly, January 21, 1882, p. 37, is a commentary on Mark Twain’s struggle with Canadian copyright laws and the unauthorized publication of his books. 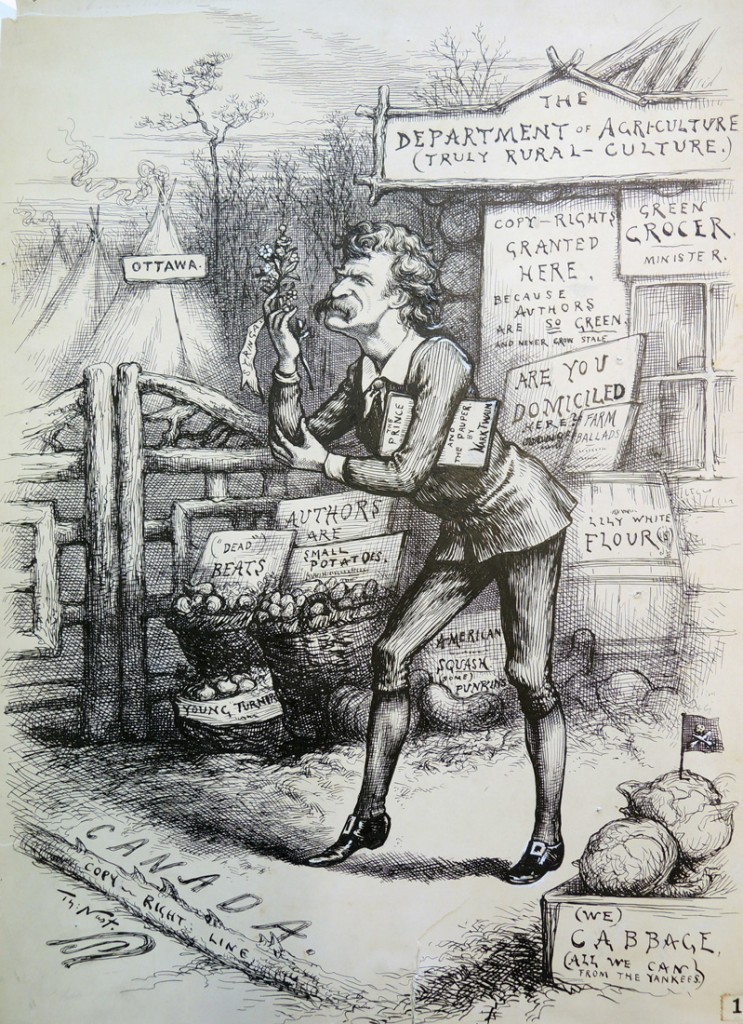 Before there were international copyright laws, Canadian publisher could release books by American authors without paying royalties, sometimes even before the books were published in the United States. This happened to Mark Twain, who fought back in November 1881 by traveling to Montreal to establish temporary residency before releasing The Prince and the Pauper. The odd practice of requiring authors to register their works with the Canadian Minister of Agriculture, led to the green grocer theme in Nast’s cartoon.

Twain made a number of public appearances during his stay, including a speech at a banquet given in his honor on December 9, 1881. The New York Times printed his remarks in full the following day. Here is a small section:

“That a banquet should be given to me in this ostensibly foreign land and in this great city, and that my ears should be greeted by such complimentary words from such distinguished lips, are eminent surprises to me; and I will not conceal the fact that they are also deeply gratifying. I thank you, one and all, gentlemen, for these marks of favor and friendliness; … I did not come to Canada to commit crime – this time – but to prevent it. I came here to place myself under the protection of the Canadian law and secure a copyright. I have complied with the requirements of the law; I have followed the instructions of some of the best legal minds in the city, including my own, and so my errand is accomplished, at least so far as any exertions of mine can aid that accomplishment. This is rather a cumbersome way to fence and fortify one’s property against the literary buccaneer it is true; still, if it is effective, it is a great advance upon past conditions and one to be correspondingly welcomed. 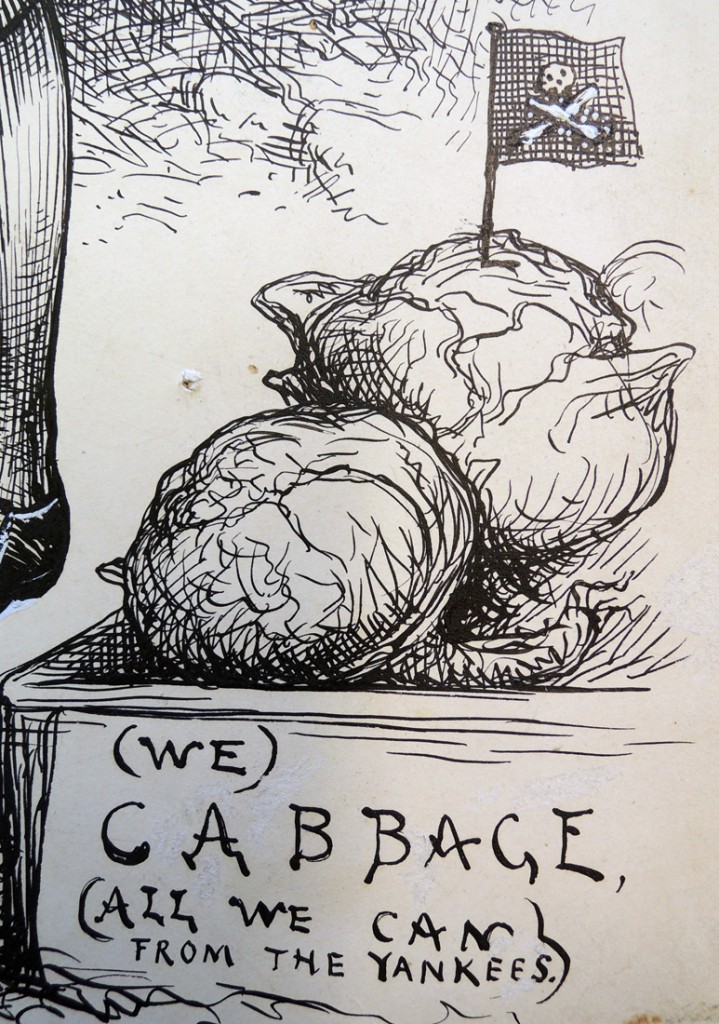 It makes one hope and believe that a day will come when, in the eye of the law, literary property will be as sacred as whiskey, or any other of the necessaries of life. In this age of ours, if you steal another man’s label to advertise your own brand of whiskey with, you will he heavily fined and otherwise punished for violating that trademark; if you steal the whiskey without the trademark, you go to jail; but if you could prove that the whiskey was literature, you can steal them both, and the law wouldn’t say a word. It grieves me to think how far more profound and reverent a respect the law would have for literature if a body could only get drunk on it. Still the world moves; the interests of literature upon our continent are improving; let us be content and wait.” 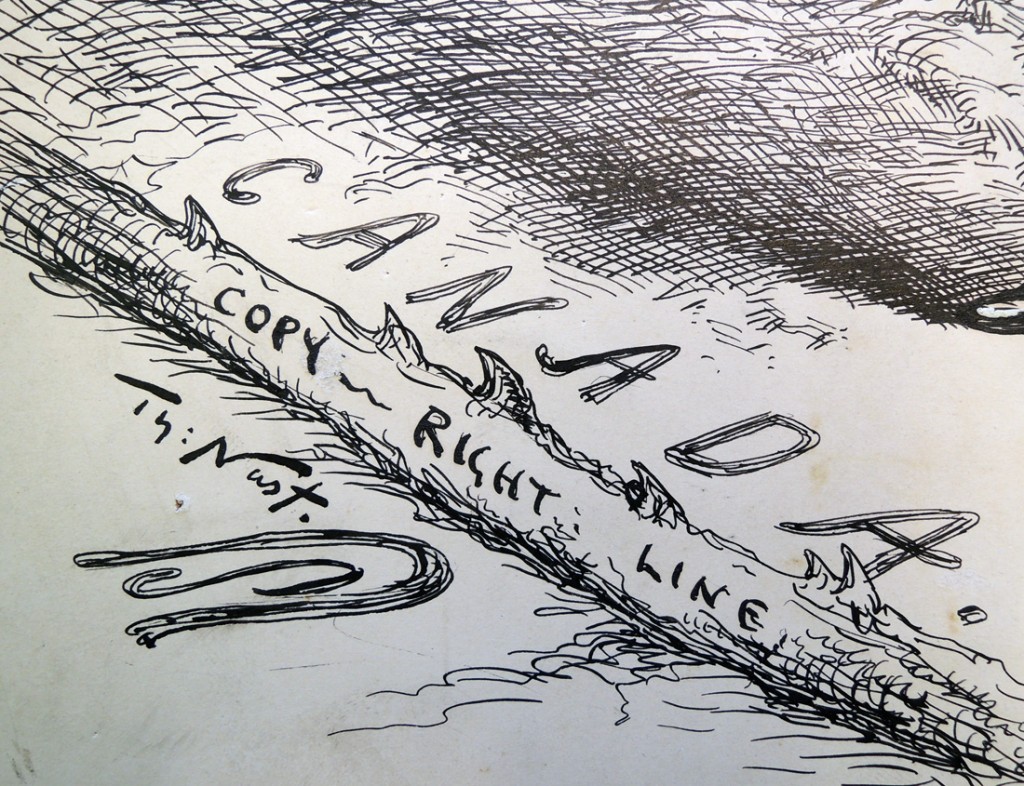