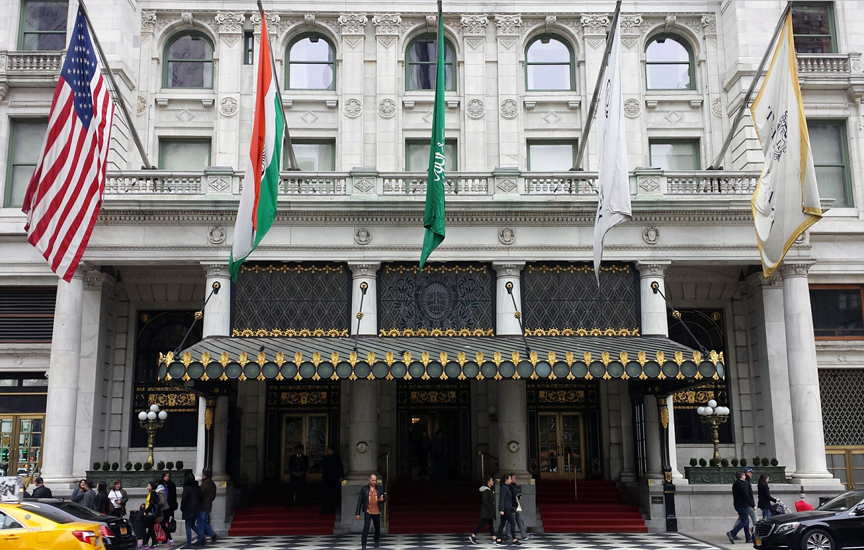 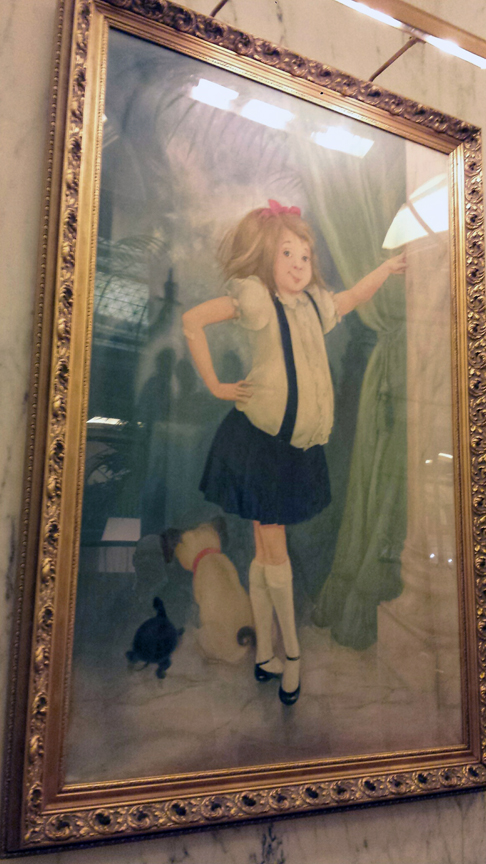 “To begin with,” wrote Cameron MacRae, class of 1963, “the portrait of Eloise that has hung in the Hotel Plaza for several years was swiped on Wednesday, the night of the Junior League Ball. According to an alert Plaza spokesman the Hillary Knight picture ‘Just isn’t here any more — it’s probably hanging in some college dormitory.’” Daily Princetonian, 29 November 1960.

Artist Hilary Knight painted the portrait of Eloise in 1957, after the success of the illustrated children’s book he and Kay Thompson published about a young girl who lived at the Plaza Hotel (Cotsen Children’s Library (CTSN) Eng 20Q 27597).

The painting hung opposite the Palm Court until “college night” in 1960 when students from many ivy league universities attended the annual debutante ball in the Plaza’s ballroom (seen below). As the Princeton student reported, the painting disappeared and was never found. Knight consented to paint a second copy, which is the one we saw during a recent tour of the Plaza Hotel. (On a side note, the Pennsylvania railroad was overloaded and stopped working during the balls that year. 400 Princeton students had to be driven back to campus in taxis.) 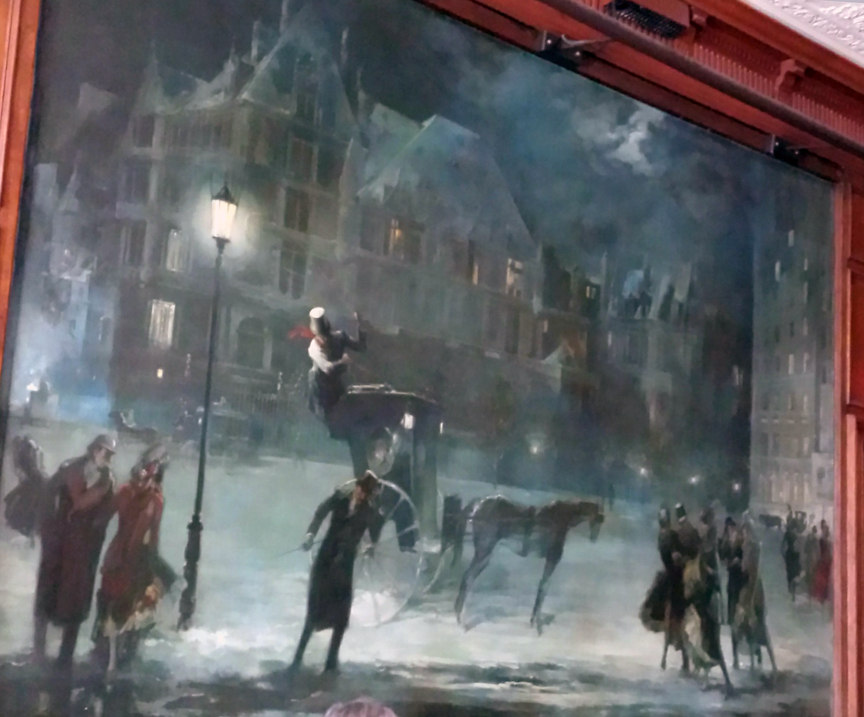 The original 1945 murals painted by Everett Shinn (1876-1853) in the Plaza’s Oak Bar are still in place, although both the Oak Room and Oak Bar closed in 2011. During our tour, we learned that the mural of the Vanderbilt mansion never appeared in the famous Alfred Hitchcock’s film North by Northwest. Although several scenes were filmed at the Plaza, Hitchcock did not like the columns in the Oak Bar and so, recreated the entire room back in the studio for the filming of that one scene. Only a detail of the Shinn painting was reproduced. 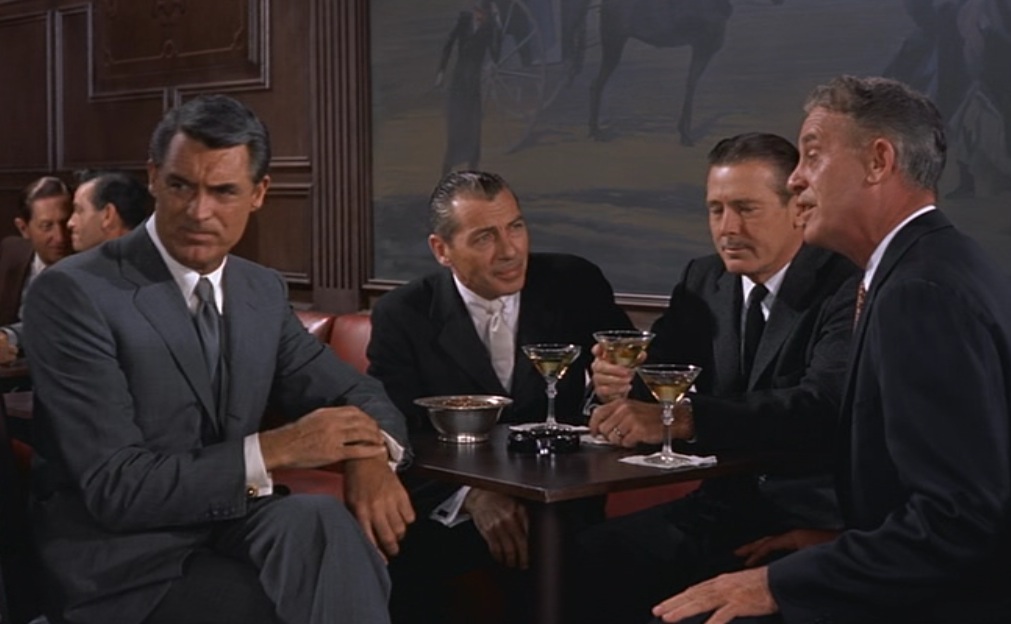 (Another side note, although Cornelius Vanderbilt’s mansion, formerly next door to the Plaza Hotel, had 100 rooms, his son Alfred moved out and was the first person to register for a room at the newly built Plaza Hotel in 1907.) 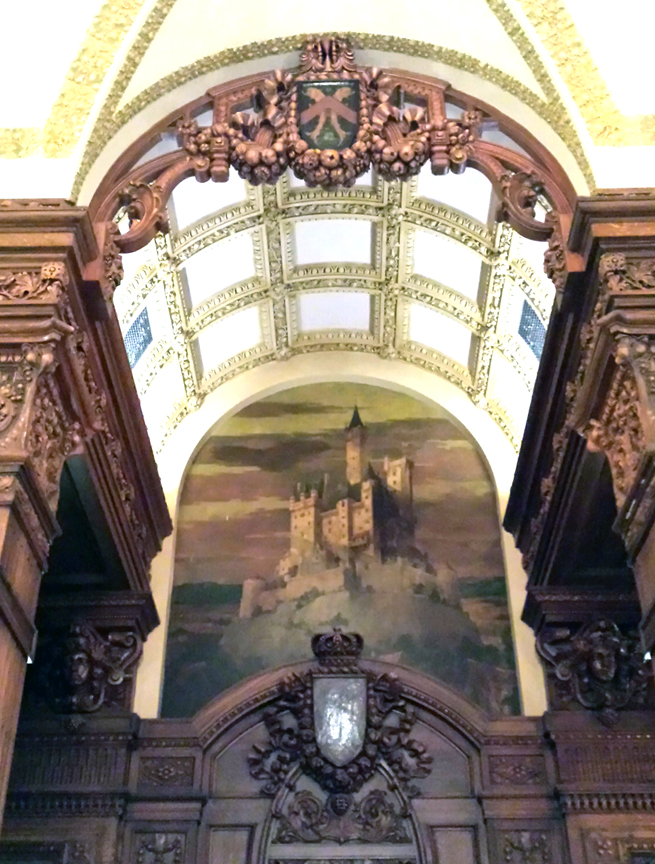 When the Oak Room reopened in 2008 after extensive cleaning to remove the nicotine stains from cigarette smoke, Frank Bruni of the New York Times reviewed the restaurant, admiring the decor more than the food. He commented, “That ceiling was framed by yard upon yard of gold molding and trim. If heaven is wood-paneled, it probably looks something like this.” “A Waltz of Gilt and Truffles, The Oak Room,” New York Times, February 3, 2009.

Until 1969, when Betty Friedan and other members of the National Organization for Women staged a protest, the Oak Room was only open to men during the day (while the stock exchange was open). Friedan and the others were thrown out of the Plaza but soon after, the policy was changed and women were allowed to eat at the restaurant at any time of day. 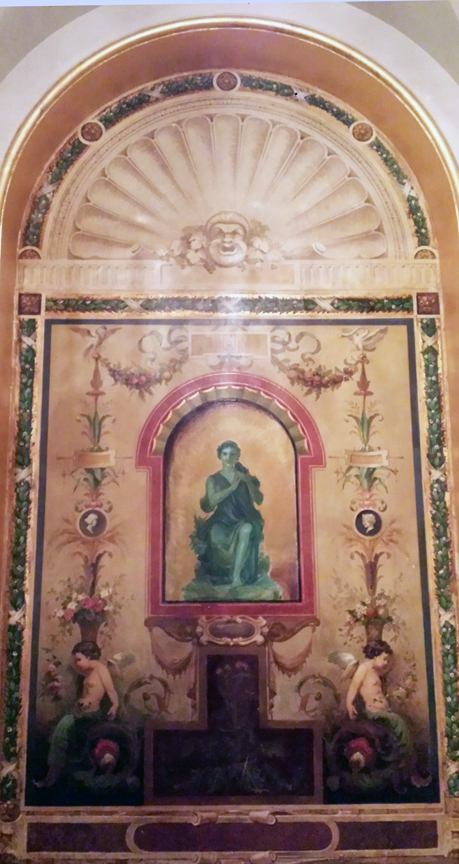 The eight publicly accessible interiors at the Plaza are largely a result of four different campaigns: Henry Hardenbergh’s original design of 1905-07; the 1921 renovation and addition by Warren & Wetmore; Schultze & Weaver’s ballroom from 1929 and Conrad Hilton’s renovation of the building when he acquired it in 1943. Hardenbergh, Warren & Wetmore and Schulze & Weaver were three significant early twentieth-century American architectural firms, which were preeminent hotel designers.

Ten years ago, the Plaza closed to the public for three years in order to clean and restore the painted decoration of the Terrace Room and the Ballroom. The richly decorated coffered ceiling, wall panels, and wooden doors all feature painted detail by noted interior decorator John Smeraldi.

The 1929 Neo-Rococo ballroom, the third since the opening of the Plaza in 1907, was also beautifully restored although it remained surprisingly empty during our visit last weekend. 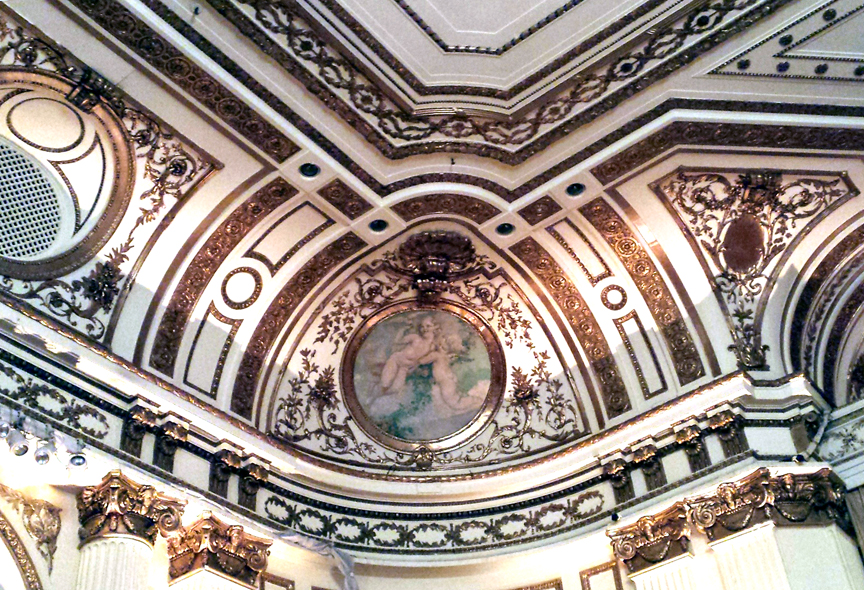 The Plaza was the dream of hotelier Fred Sterry; Harry S. Black, President of the Fuller Construction Company; and German financier Bernhard Beinecke. Beinecke’s sons Edwin, Frederick, and Walter Beinecke assumed the leadership of The Sperry and Hutchinson Company in the 1920’s, which grew from a small enterprise to a Fortune 500 company by 1975. The Beinecke Rare Book and Manuscript Library was given to Yale University by these men and their families in 1963. 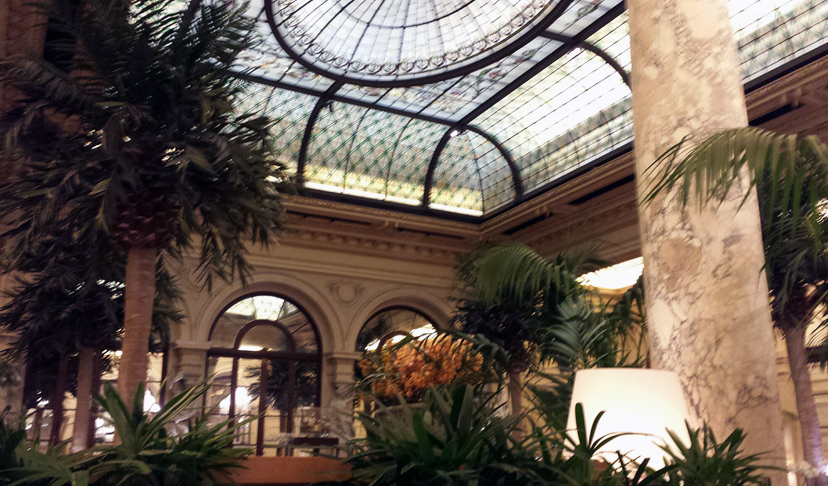 The original skylight in the Palm Court was removed many years ago to make room for air conditioning units in the space above. Recently the stain glass ceiling was recreated and reinstalled, with fiber optic lights behind. An outdoor terrace sits above, only available to the owners of the building’s condominiums.