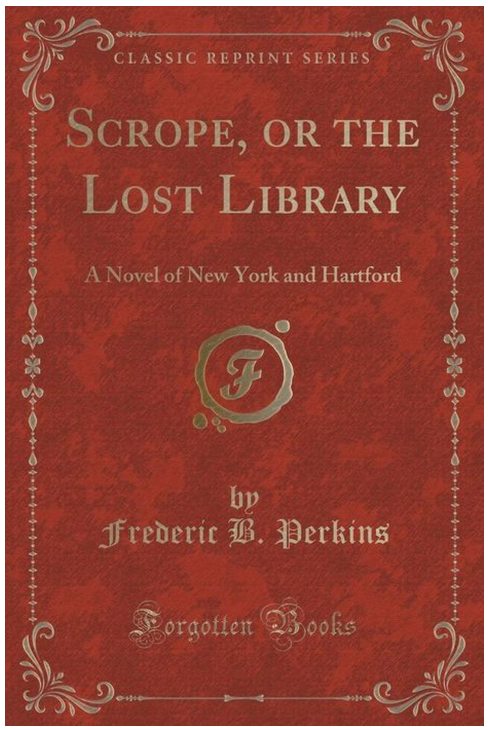 Lawyer, librarian, and novelist Frederic Beecher Perkins (1828-1899) wrote Scrope while assisting his bother-in-law, Edward Everett Hale (1822-1909) in the editorship of the magazine Old and New, in Boston. It was during this period that he became intimately involved with the buying and selling of books in America. Chapters of Perkins’s story were released in Old and New, before it was published in 1874.

The novel follows a young man from Hartford, Connecticut, trying to find some books that had belonged to one of his ancestors 200 years earlier. To this end, he becomes involved in the 19th-century practice of canvassing or selling of books by subscription.

“If I were to recommend the story as having any merit in particular,” commented Perkins, when his novel was reprinted 20 years later in Connecticut Magazine, “it would be for the description of the book auction in the first chapter; that of the subscription-book publisher, his character and ways of doing business, and that of old William Gowans and his catacomb of a book-store.”

Perkins continued, “The characters in the story are nearly all described from persons I have known. Mr. Tarbox Button, for instance, was a close study from the life of a late successful New York subscription-book publisher. I seem to have succeeded in delineating a type in this case; for when the printers of Old and New came to this personage, they wanted him left out. They said I had so accurately described the person and the ways of another well-known publisher in the same line, and who was a valuable customer of theirs, that when he came to see it he would certainly be angry and would take away from them all his business; and I had some difficulty inducing them to tolerate my portrait.”

In this novel, Button instructs his pupil in how to sell a book:

Commit this to memory word for word. Hold the Book you are selling in your own Hands. Don’t let the customer take it unless necessary. Don’t merely say you have got it and talk about it, but show it. Don’t ask the customer to buy it, except as the very last resort; but show it and describe it until he says, “I will take one.” Don’t tell what it costs until he wants the book. When he is ready, hand him the Order Book and pencil, and he will see the price extended opposite the names already in. Remember, you must make the customer want the book, before you try to sell it. He would not buy coined gold if he did not want it. 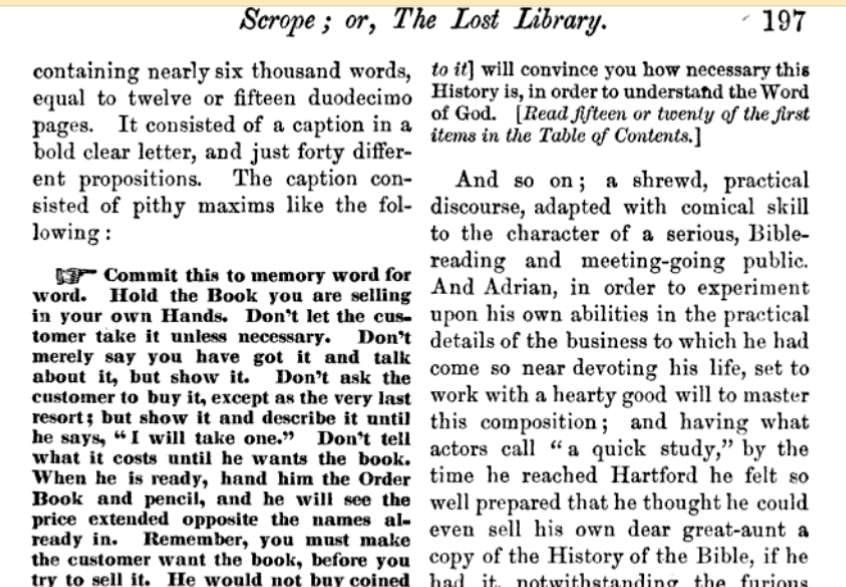