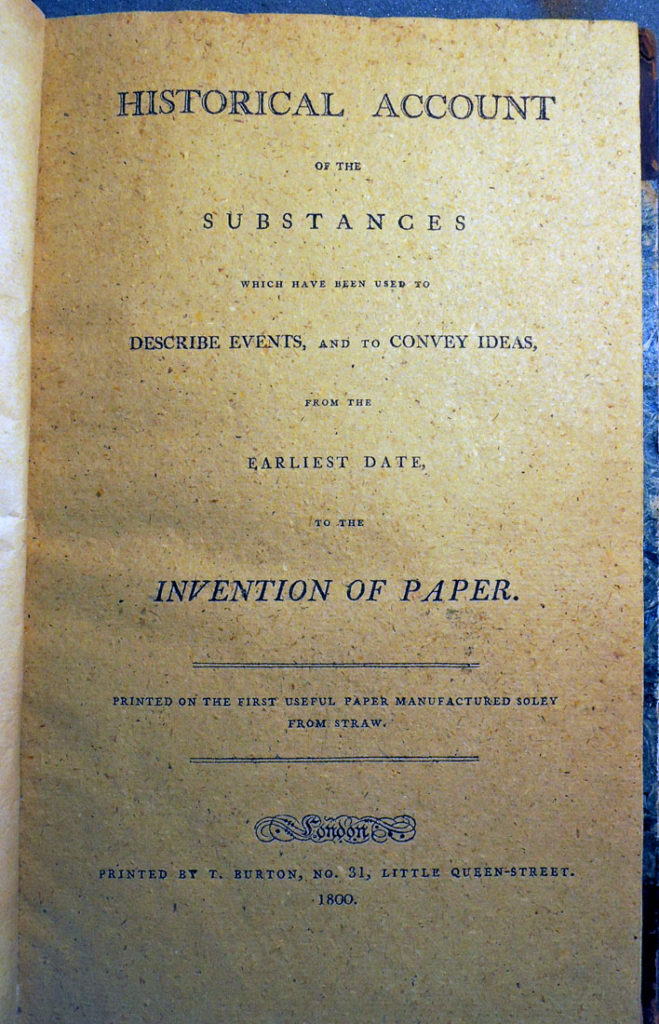 The second two were for manufacturing paper from straw, hay, thistles, waste and refuse of hemp and flax, and different kinds of wood and bark. Wood pulp paper. “The manufactory was first established at the Neckinger Mill, at Bermondsey; and afterwards removed to the Thames Bank, Chelsea, where it terminated unsuccessfully.” –The Franklin Journal and American Mechanics’ Magazine 1, no. 4 (April 1826): 251. Previous debts forced the closure and sale of his Straw Paper Manufactury in 1804. 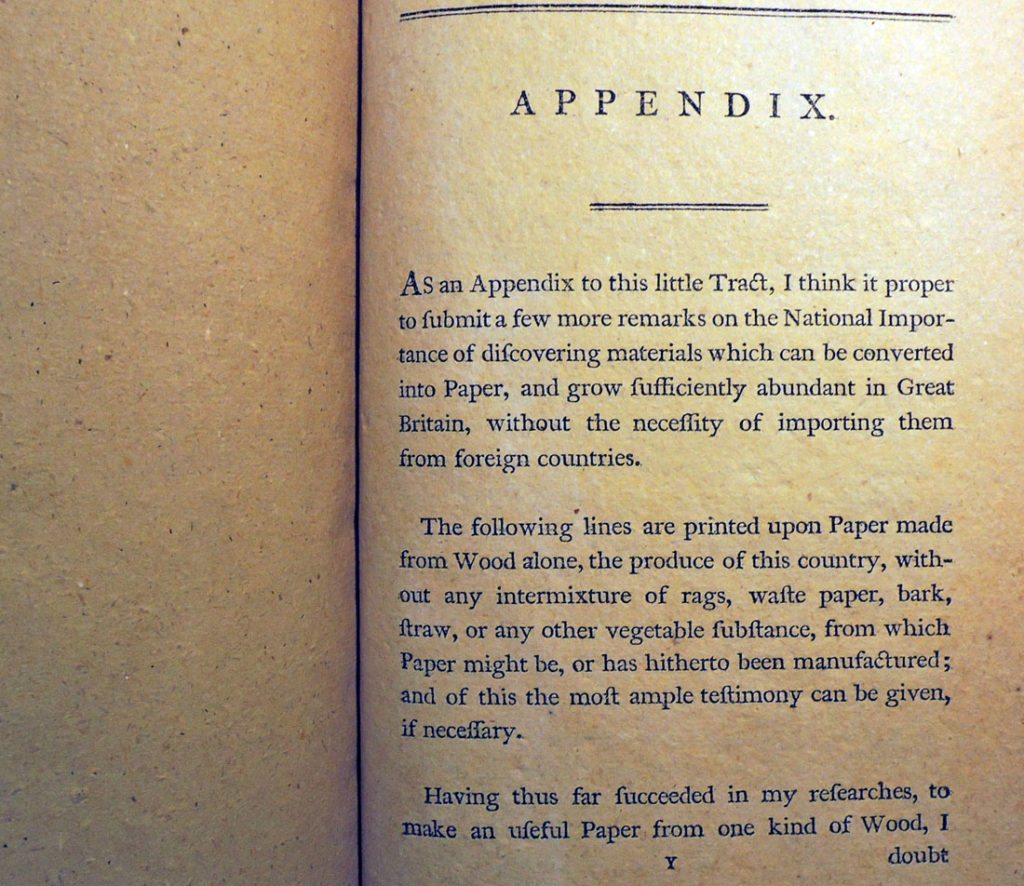 Thanks to Elmer Adler, the Graphic Arts Collection holds the first book printed on paper made not from linen or cotton but from straw, with an appendix printed from paper made from wood pulp. Koops dedicated his book to George III and wrote:

“I therefore most submissively, entreat permission to lay at Your Majesty’s feet the first useful Paper which has ever been made from Straw, without any rags or addition, and on which these lines are printed; but at the same time most humbly beg leave to observe to Your Majesty, that this Paper is not yet in such a state of perfection as it will hereafter be, when the necessary, implements are completed, and the Manufactory regularly established and farther advanced; but as there now can be no doubt that good and useful Paper may be manufactured solely from Straw.” 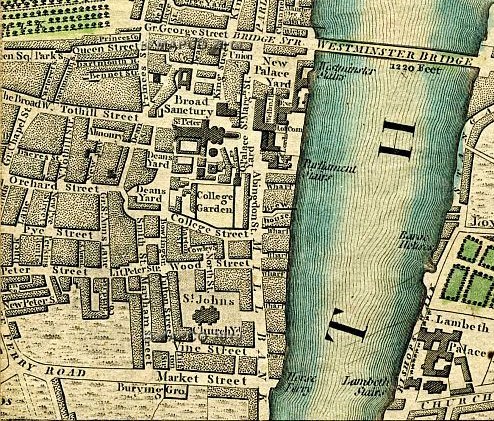 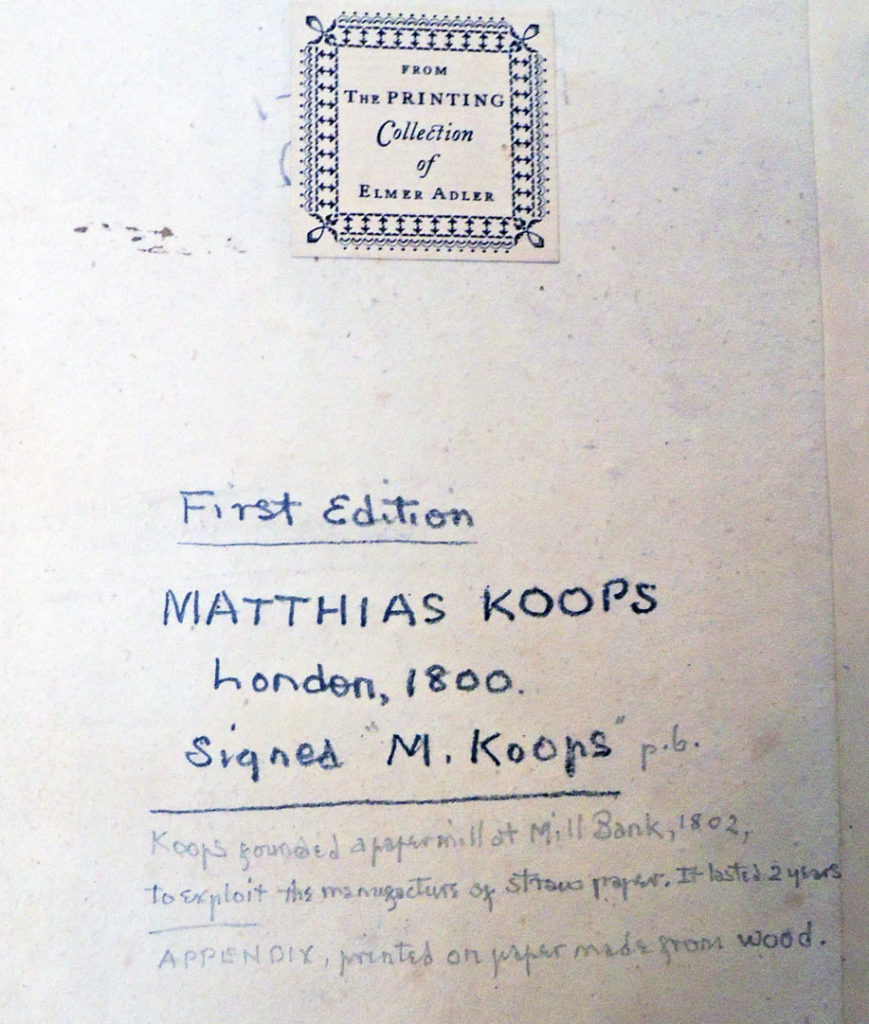 April 28, 1800. No. 2392. Matthias Koops. Extracting printing & writing ink from printed & written paper, & converting the paper from which the ink is extracted into pulp, and making thereof paper fit for writing, printing, & other purposes. The printed and written papers, after certain selection, are to be divested of their size by means of hot water, and afterwards boiled in solutions of American potashes and lime water mixed, and of a different strength, accordingly as the paper has been printed with German or English ink, or ordinary writing ink.

After washing with water, the material resulting from such treatment is to be thoroughly cleansed from the alkali by washing in the engine; and to brighten the colour, so much of the pulp is to be treated with a solution prepared by distilling a certain amount of marine salt with a certain amount of black wad and vitriolic acid into soft water. This pulp is then to be ground in order to be made into paper.

Written paper assorted is cleansed from size by boiling water, the water pressed out; it is put into a wooden case lined with a thick mixture of white lead & water, the neck of a retort containing the before-mentioned ingredients is attached and heat applied, when the article is impregnated so that it becomes whitened; it is conveyed into the engine to grind into a substance for making paper.– [See Repertory of Arts, vol. 14, p. 225; Davies on Patents, p. 244; Bolls Chapel Reports (sixth), p. 197.]

February 17, 1801. No. 2481. Matthias Koops. Manufacturing paper from straw, hay, thistles, waste & refuse of hemp & flax, & different kinds of wood & bark, fit for printing & other useful purposes, by steeping for a given time in lime water, to which, in some cases, christal of soda or potash may be added, afterwards boiling in clean water, in which, in some cases, a certain quantity of chrystal of soda or potash may be dissolved, then washing and again boiling, after which pressing, when proceed to manufacture the material into paper by the usual & well-known processes of making paper.

In the case of straw or hay, they are cut into portions of about two inches in length by a chaff-cutting machine; with thistles, they are cut when the bloom begins to fall therefrom, dried and cut into lengths of two inches; and with wood, it is first reduced into shavings, then cut with the chaff-cutting engine into lengths of about two inches; but wood which contains much turpentine or resinous matter cannot usefully & beneficially be made into paper.