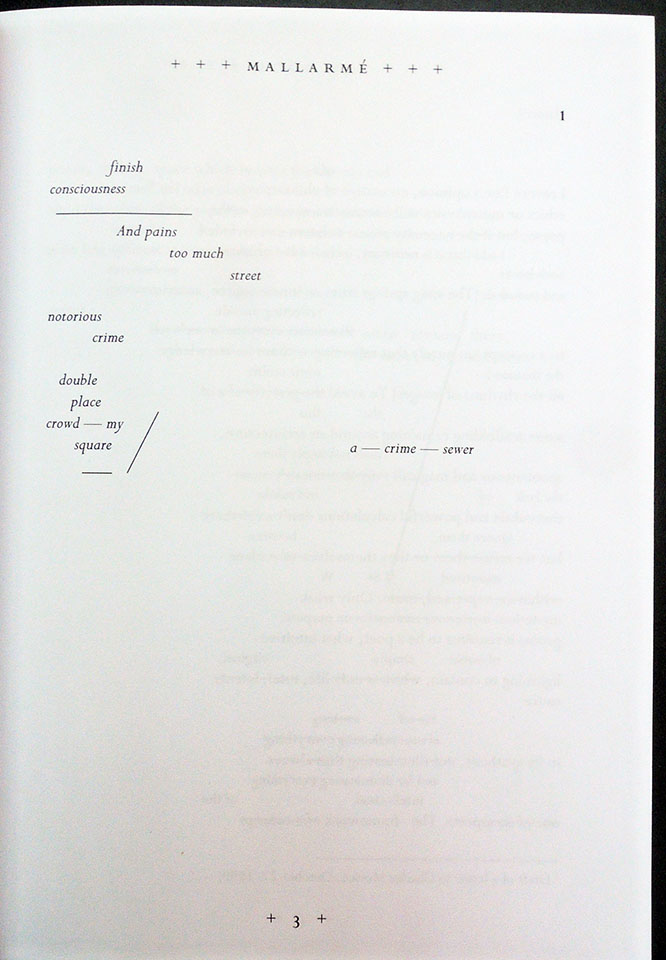 The French poet Stéphane Mallarmé spent more than 30 years on a project he called Le Livre. This legendary, unfinished project, published posthumously in French, has now been translated into English for the first time. Below is a segment from the review, “Stéphane Mallarmé’s The Book and Un Coup de dés jamais n’abolira le Hasard,” by Mary Ann Caws in The Brooklyn Rail.
https://brooklynrail.org/2019/02/art_books/Stphane-MallarmsThe-BookandUn-Coup-de-ds-jamais-nabolira-le-Hasard

To take just the 72 pages of Stéphane Mallarmé’s Le Livre (originally posthumously published in French in 1957), at once fragmentary and yet feeling so completely itself, every time we encounter it, it seems a more astonishing piece of work. I always loved the way it was so majestically presented, collecting notes and drafts along with typeset pages, the poet dressed as scribe or priest of poetry, leaving the assembled audience every fifteen minutes of reciting in order to reshuffle the remaining pages, so that CHANCE would enter each time he re-appeared on the stage. For this was not just a book, but The Book.

What it means for us now, in this present rendering, is a lively reading of life as art—conceived of in the most simple and elementary terms, whose juncture we have to determine and carry out ourselves in each of our individual readings, private or collective and public. That was Mallarmé’s magic, the private as shared, the non-journalistic as both poetic and unboring, so he crossed out almost every other word to make the text less immediately graspable.

Here is the thing: Mallarmé is always the most modern—the most complicatedly modern—no matter what. As for Le Livre, or The Book, Sylvia Gorelick’s newly translated rendering (after the Scherer and the Marchal editions, to which I was bravely clinging), is deeply intelligent. After perusing her introduction to find the (absolutely) confessional mode of Mallarmé:

I am me—faithful to the
book

It just gets me. Of course he was, and of course we all remember his saying as he gasped, dying “Destroy it – / It would have been beautiful” about his Hérodiade—and how glad we are it did not meet that fate. 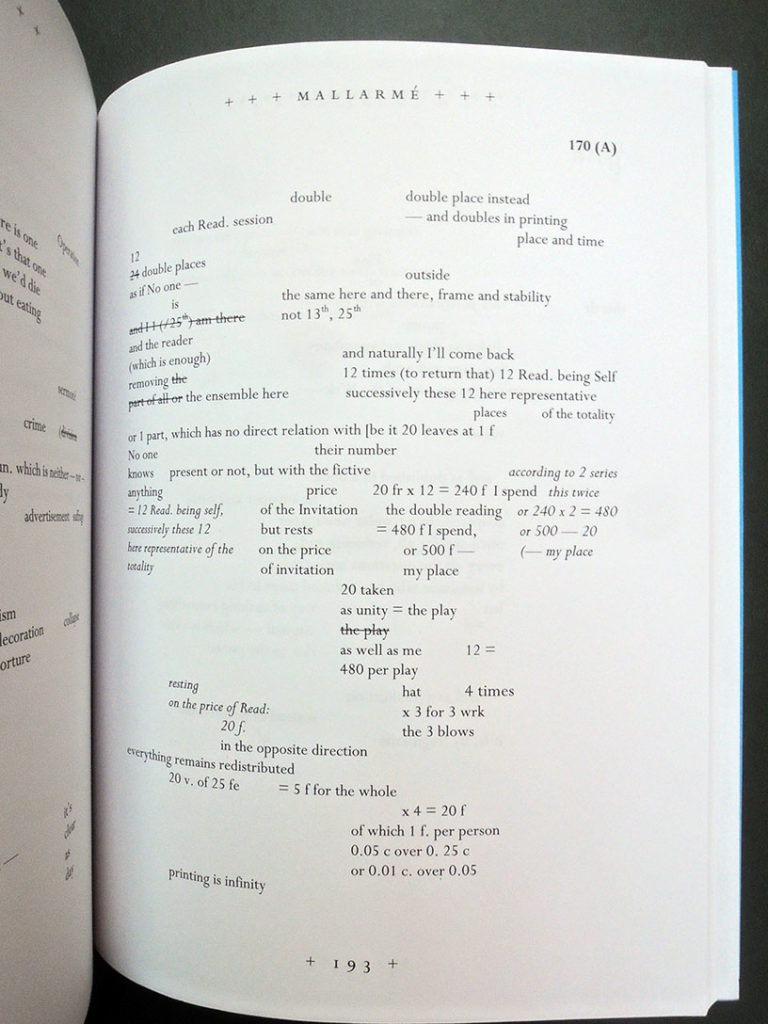 Here are a few sample pages. 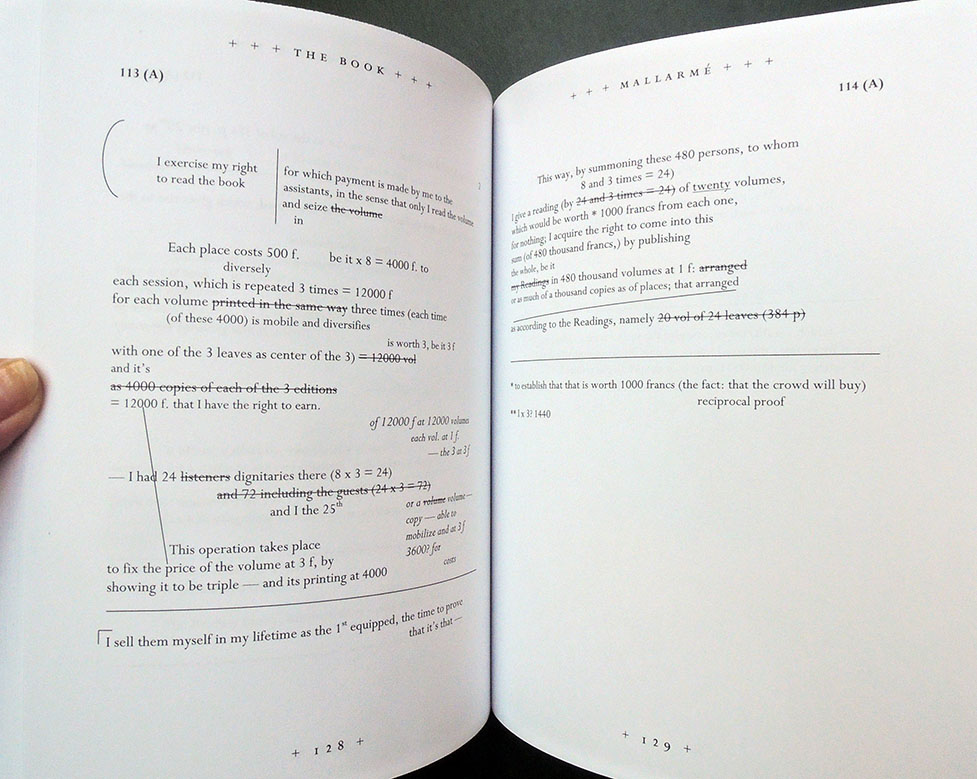 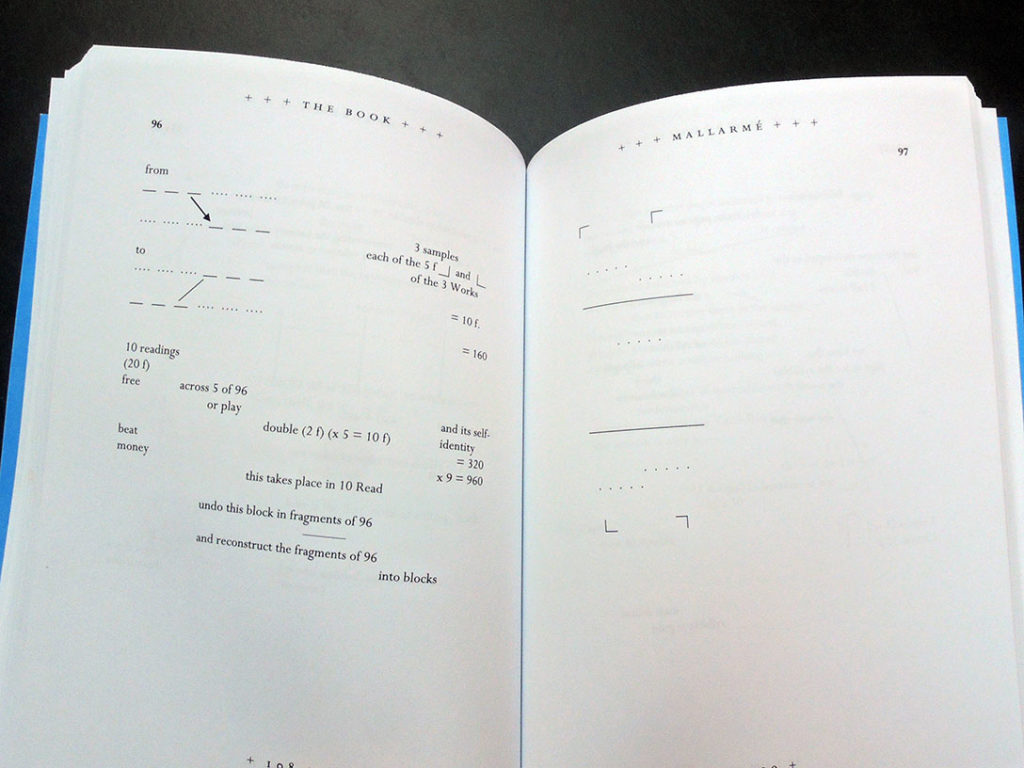 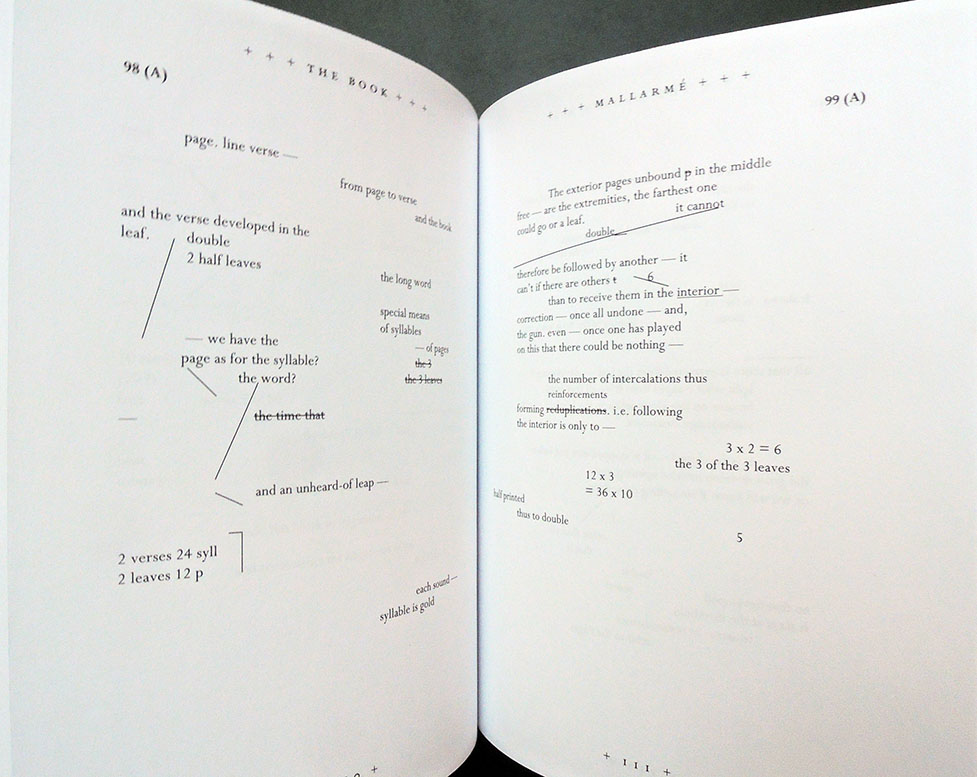 Stéphane Mallarmé, The Book; translated and with an introduction by Sylvia Gorelick (Cambridge, Massachusetts : Exact Change, 2018). Firestone PQ2344 .A2 2018 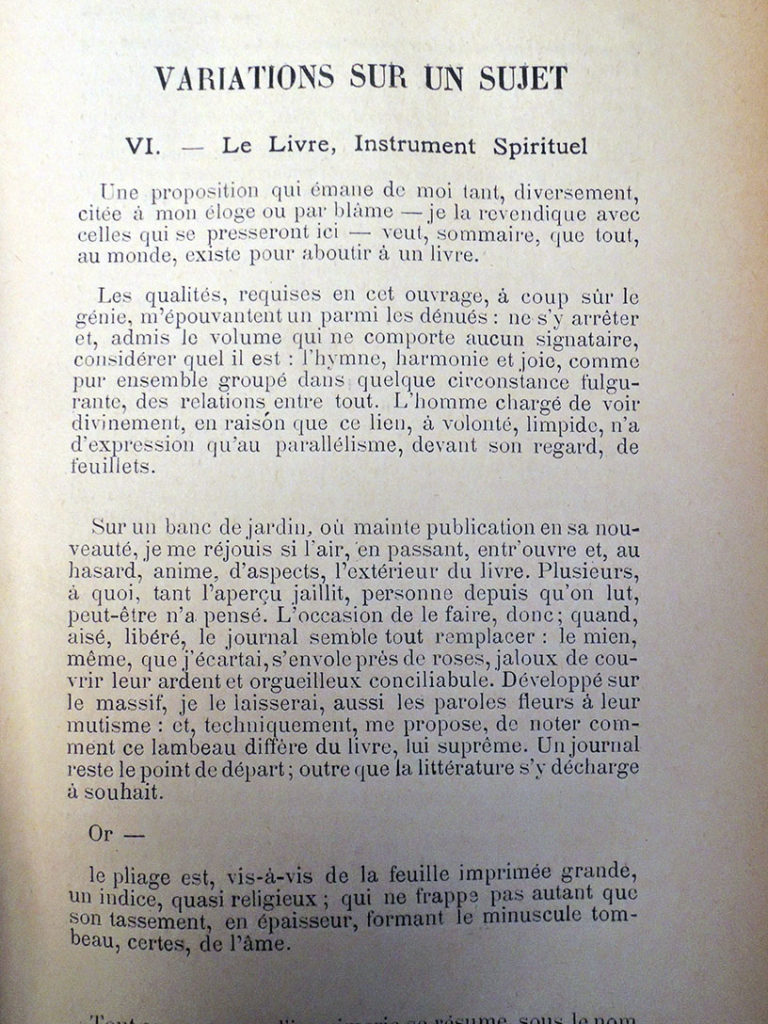 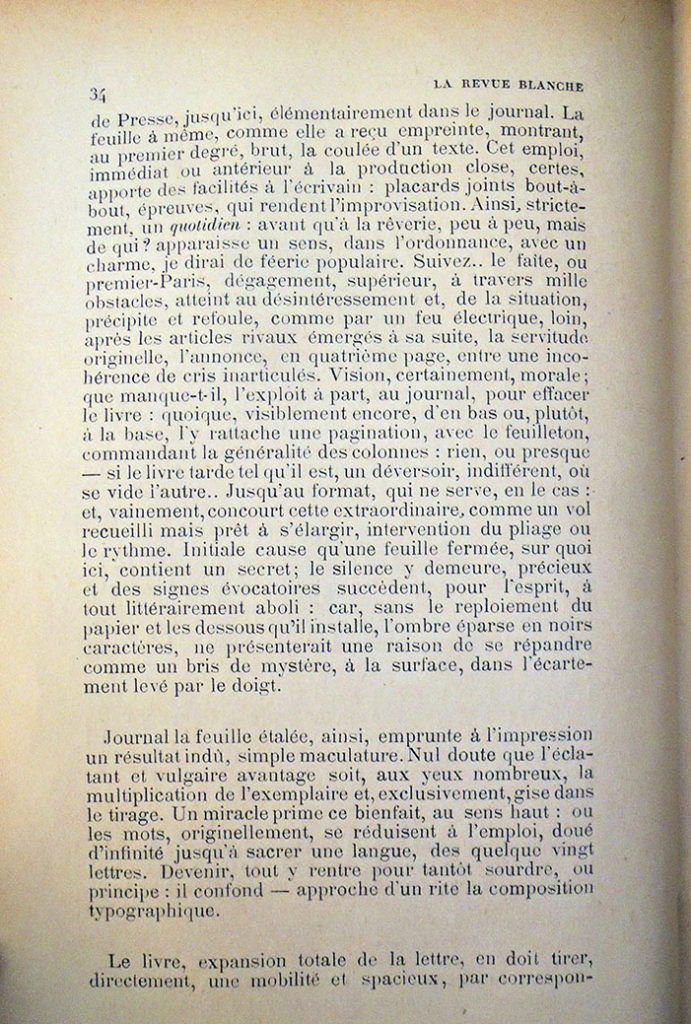 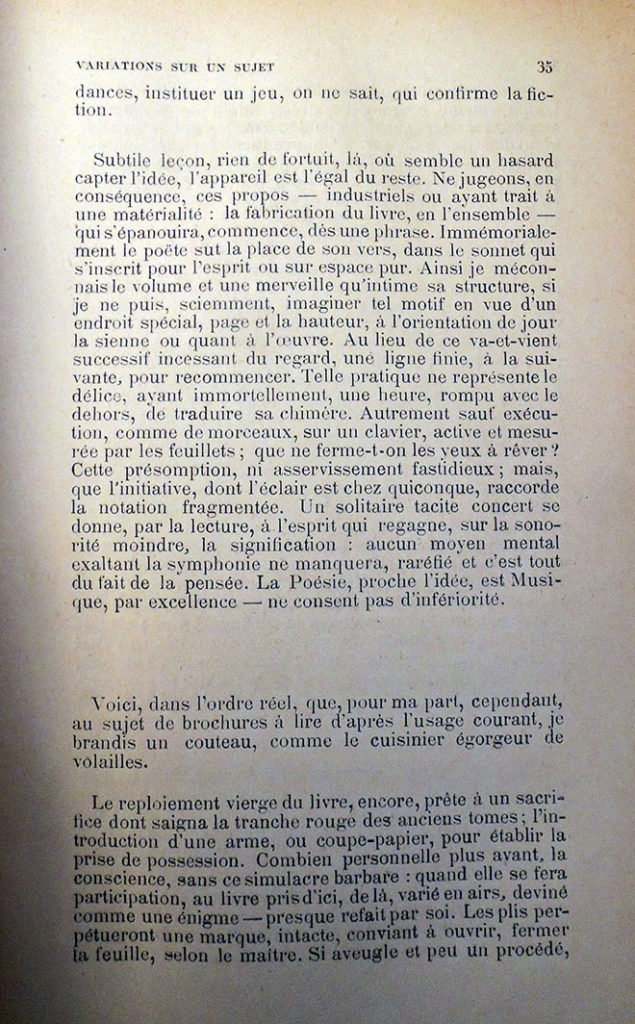 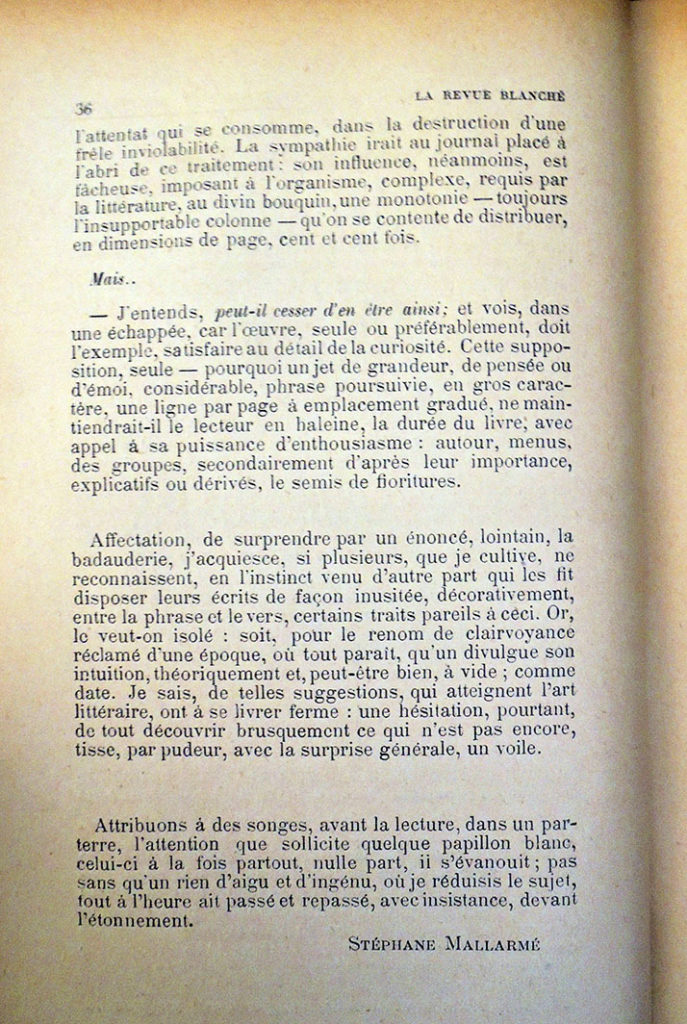