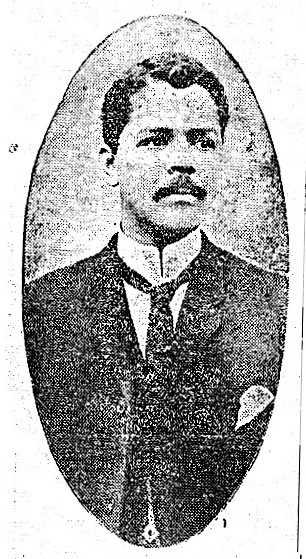 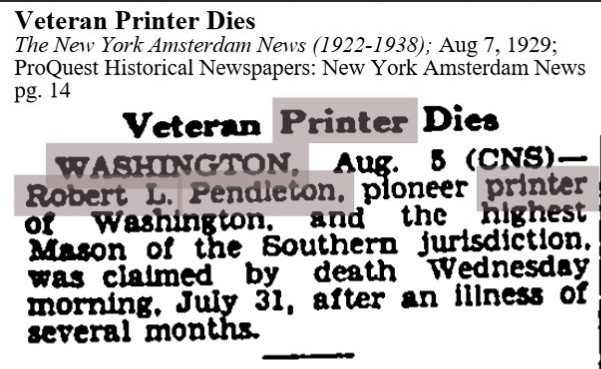 Robert Lewis Pendleton (1865-1929), one of the first African American printers to establish their own firm in Washington D.C., founded the R.L. Pendleton Company, also called Pendleton’s Quality Printing House, in 1886. Over the next 44 years, his shop operated at several Washington locations including 524 10th NW.; 1103 F NW. and 609 F Street NW.

Born in Marianna, Florida, Pendleton was listed as a job printer by age of sixteen, later moving to New York City in 1884 to work on the New York Globe. The following year he was printing at the People’s Advocate in Washington D.C. and then, established his own printing business, specializing in jobs for African American organizations. Among the books he printed were those written by his wife, Leila Amos Pendleton, author of A Narrative of the Negro (1912).

In 1910, Pendleton formed the American Negro Monograph Company with John W. Cromwell, his former boss at the People’s Advocate, as the editor. They attempted to republished important African American essays that had gone out-of-print, including The confession, trial and execution of Nat Turner, the Negro insurgent (1910); Contemporary evolution of the Negro race (1910); Biography of Benjamin Banneker (1910); and The social evolution of the Black South by W.E.B. Du Bois (1911). 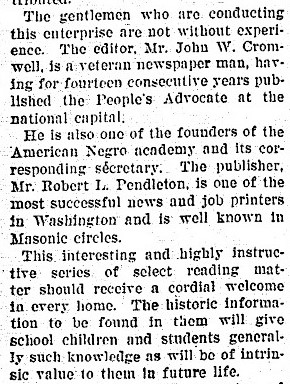 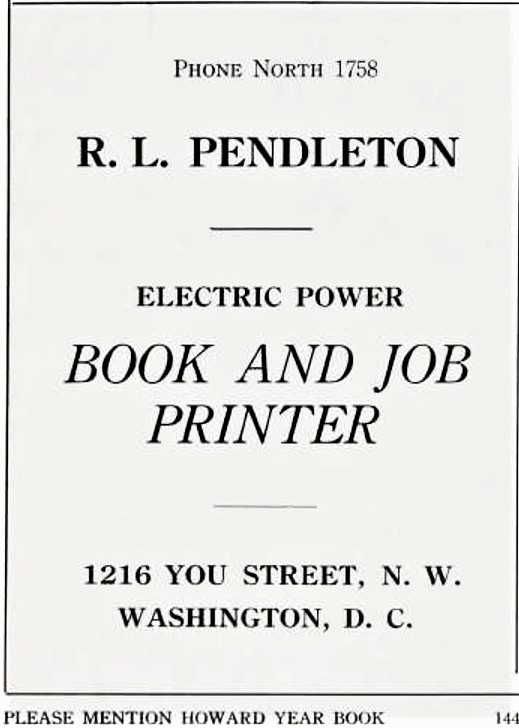 For many years, Pendleton also taught printing at Howard University and was an active supporter of the school (see his advertising in the early yearbooks). He and his wife were also active with the Black fraternal order of the Scottish Rite Masons Temple, where he served as the Sovereign Grand Commander of the Southern jurisdiction. When they were not allowed to join or use the main Temple, Pemdleton organized Black members to build their own Temple 10 blocks away.

In addition to the American Negro Monograph series, he printed the following:

Character: the true standard by which to estimate individuals and races and by which they should estimate themselves and others. This address was delivered before the Presbyterian Council at its session which was held in the Berean Presbyterian Church, Philadelphia, Pa., October 27, 1911. Grimke, Francis James, 1850-1925. Washington: R.L. Pendleton, 1911

Gideon bands for work within the race and for work without the race: a message to the colored people of the United States: a discourse delivered in the Fifteenth Street Presbyterian Church, Washington, D.C., Sunday, March the 2nd, 1913 / Grimké, Francis J. 1850-1937. Washington, D.C.: R.L. Pendleton, 1913

A glance at the life of Ira Frederick Aldridge / Peyton, Fountain. [Washington]: [Printed by R.L. Pendleton], 1917

A glance at the past and present of the Negro: an address … delivered at Church’s Auditorium before the Citizen’s Industrial League of Memphis, Tenn., Sept. 22, 1903. Terrell, Robert Herberton, 1857-1925. Washington: R.L. Pendleton, 1903

History of the Bethel Literary and Historical Association.; being a paper read before the Association on Founder’s Day, February 24, 1896. Cromwell, John Wesley, 1846-1927. Washington, D.C., Press of R.L. Pendleton, 1896

Life and works of Phillis Wheatley: containing her complete poetical works, numerous letters, and a complete biography of this famous poet of a century and a half ago. / Wheatley, Phillis, 1753-1784; Renfro, G. Herbert,; Pendleton, Leila Amos,. Washington, D.C.: [R.L. Pendleton], 1916

Syllabus of an extension course of lectures on race contacts and interracial relations; a study in the theory and practice of race. Locke, Alain, 1885-1954. [Washington, D.C.], [Printed by R.L. Pendleton], 1916