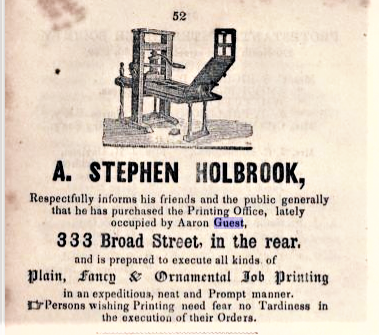 Edward Sayers, A manual on the culture of the grape,: with a dissertation on the growth and management of fruit trees, adapted to the Northern States (N.J.: Published by the author, and sold by most seedsmen & booksellers in the Union. Aaron Guest, printer, 1837).

Samuel E. Cornish (1795?-1858), Theodore S. Wright, Theodore Frelinghuysen, and others, The Colonization Scheme Considered: in its rejection by the colored people–in its tendency to uphold caste–in its unfitness for Christianizing and civilizing the aborigines of Africa, and for putting a stop to the African slave trade: in a letter to the Hon. Theodore Frelinghuysen and the Hon. Benjamin F. Butler (Newark [N.J.]: Printed by Aaron Guest, 121 Market-Street., 1840).

William Raymond Weeks, Letter to the Rev. Charles Fitch on his views of Sanctification, by the Pastor of the fourth Presbyterian Church (Newark. Aaron Guest, 1840).

James Hewson, Every man his own lawyer, or, The several modes of commencing and conducting actions in the Court for the Trial of Small Causes in the State of New Jersey: rendered plain and easy, with a variety of forms for drawing statements of demand: together with numerous references to the state laws and decisions of the Supreme Court (Newark [N.J.]: A. Guest, printer, 1841).

William Torrey, Address delivered at the temperance convention, held at Morristown, N.J., December 13, 1843; with the proceedings and resolutions of the convention, and also of that held at Hackettstown, N.J., September 26, 1843 (NJ: Aaron Guest, Printer, 1843).

Alexander Gilmore, Review of a sermon preached by N. Murray, pastor of the First Presbyterian Church, Elizabethtown, N.J., at the dedication of a church in Kingston, Pa. (Newark [N.J.]: Aaron Guest, printer, 121 Market-Street, 1843). 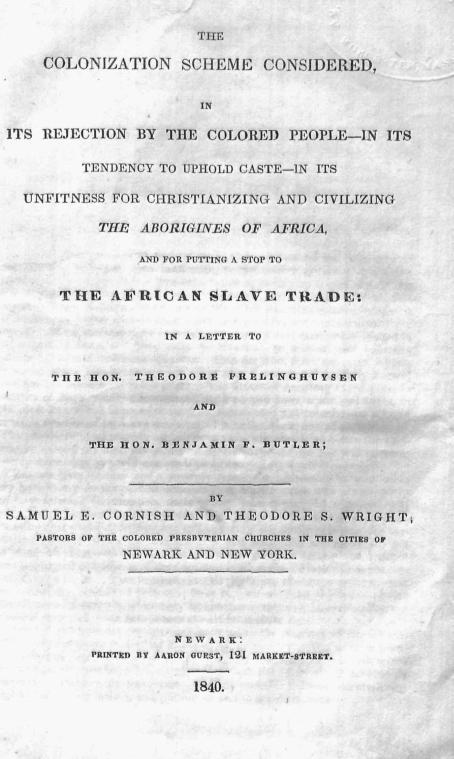 “Theodore Sedgwick Wright (Class of 1828) claims a special place in Princeton Seminary history as the first African American to attend and graduate from the Seminary. He attended from 1825 through 1828. The Board of Director’s Minute Book specifically stipulates that his race should be no bar to his admission to the Seminary (he had already been turned down by a number of institutions to which he had applied): “Dr. McAuley, on behalf of the Presbytery of Albany, applied to the Board to have Theodore Wright, a fine young man of color, admitted into the Seminary. Whereupon, resolved that his color shall form no obstacle in the way of his reception.”

“Wright was ordained by the Presbytery of Albany on February 5, 1829. He was named pastor of the First Colored Presbyterian Church of New York City and served the congregation until his death in 1847. By all reports his pastorate was a very successful one, his congregation rapidly growing until they had to find a new meeting place and eventually becoming the second largest African American church in New York City. He and his congregation were active in the Underground Railroad, helping escaping slaves in their travels from the American South to freedom in Canada. In addition, Wright served as an agent of the New England Anti-Slavery Society and worked with other anti-slavery organizations, traveling and lecturing in the cause along with such other well-known African American abolitionists as Frederick Douglass.”