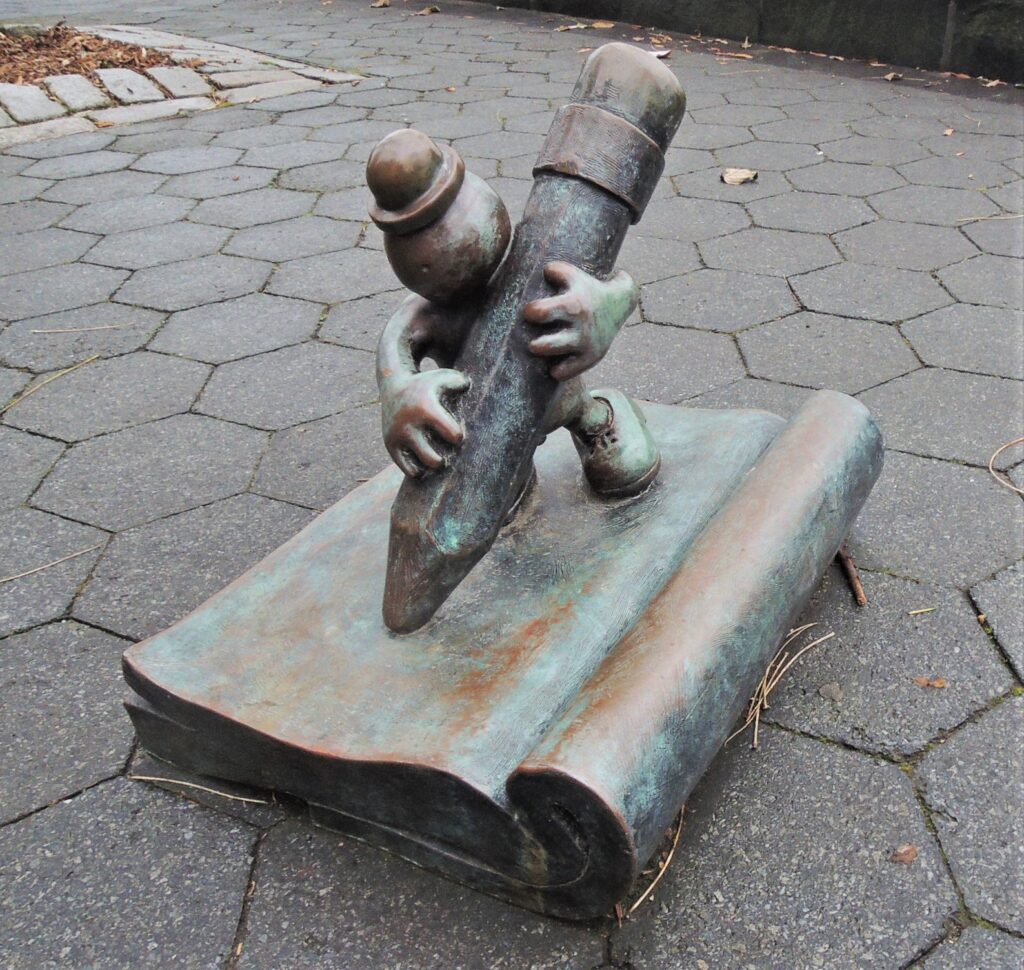 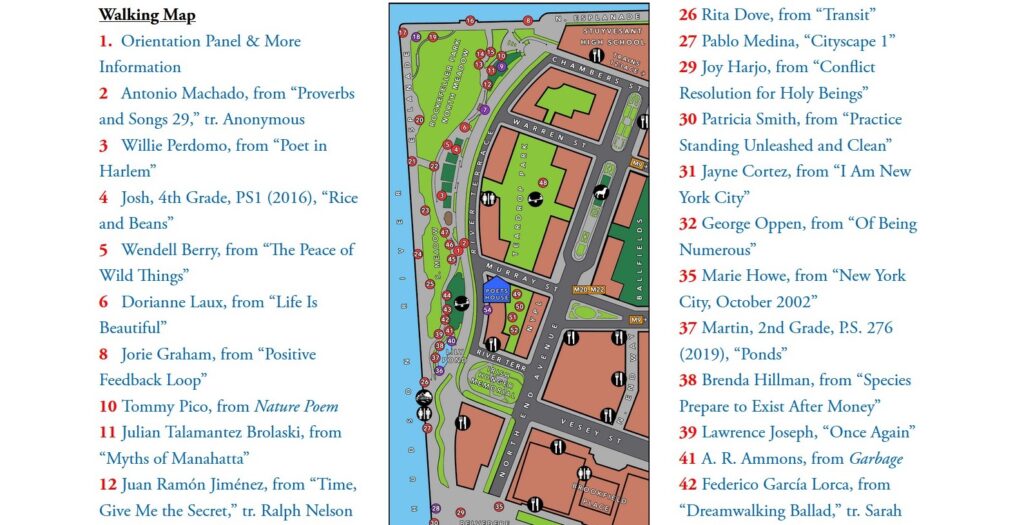 “As part of the yearlong celebration of our 10th anniversary at 10 River Terrace, check out the Poets House Poetry Path in Battery Park City—an immersive public art installation of poetry running from Rockefeller Park’s north end to the marina at Brookfield Place. This installation includes fragments from poems reaching across time, space, and cultures, featuring over 40 poets whose work considers the relationships between people, nature, and the urban landscape. The installation of the Poetry Path is now complete and can be enjoyed in person or virtually”: https://poetshouse.org/poetry-path/ 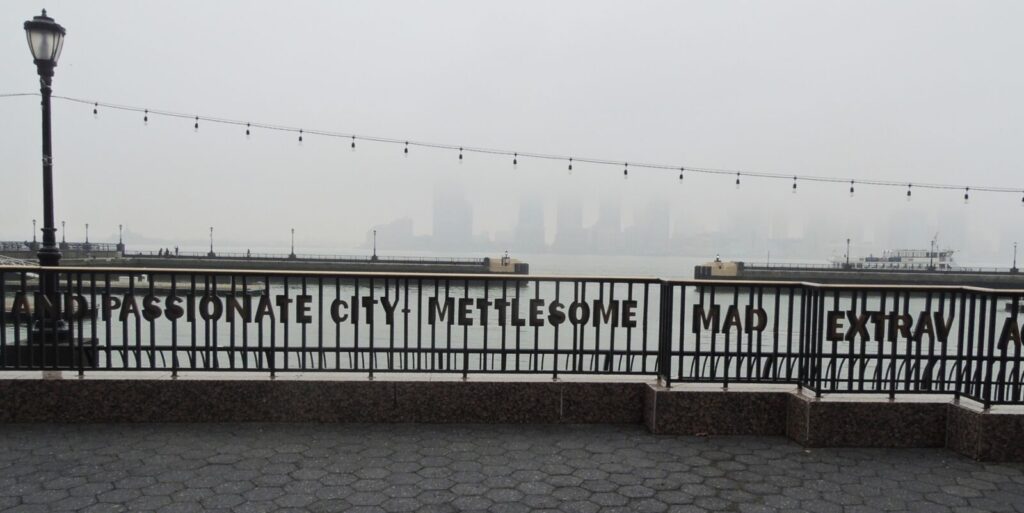 City of Ships by Walt Whitman (1819-1892)
…City of the sea! city of hurried and glittering tides!
City whose gleeful tides continually rush or recede, whirling in and out with eddies and foam!
City of wharves and stores—city of tall facades of marble and iron!
Proud and passionate city—mettlesome, mad, extravagant city!
— https://whitmanarchive.org/published/LG/figures/ppp.00473.379.jpg 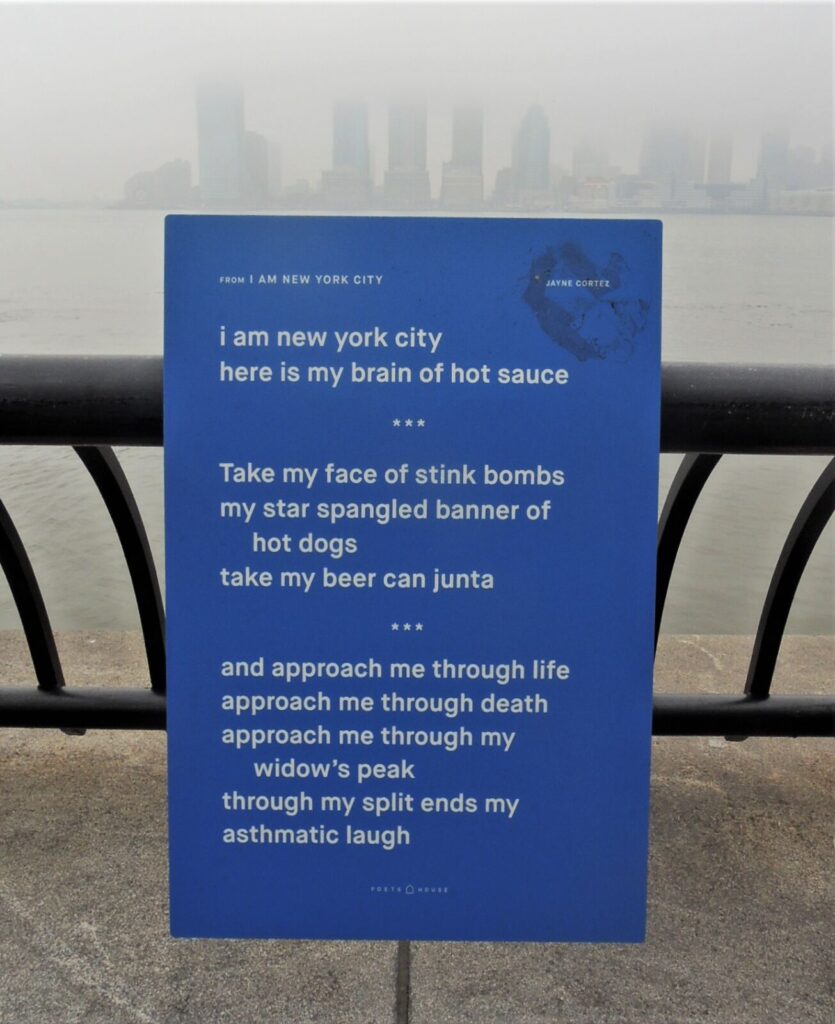 I am New York City by Jayne Cortez (1934-2012)
i am new york city
here is my brain of hot sauce
my tobacco teeth my
mattress of bedbug tongue
legs aparthand on chin
war on the roofinsults
pointed fingerspushcarts
my contraceptives all … https://www.poetryfoundation.org/poems/90805/there-it-is 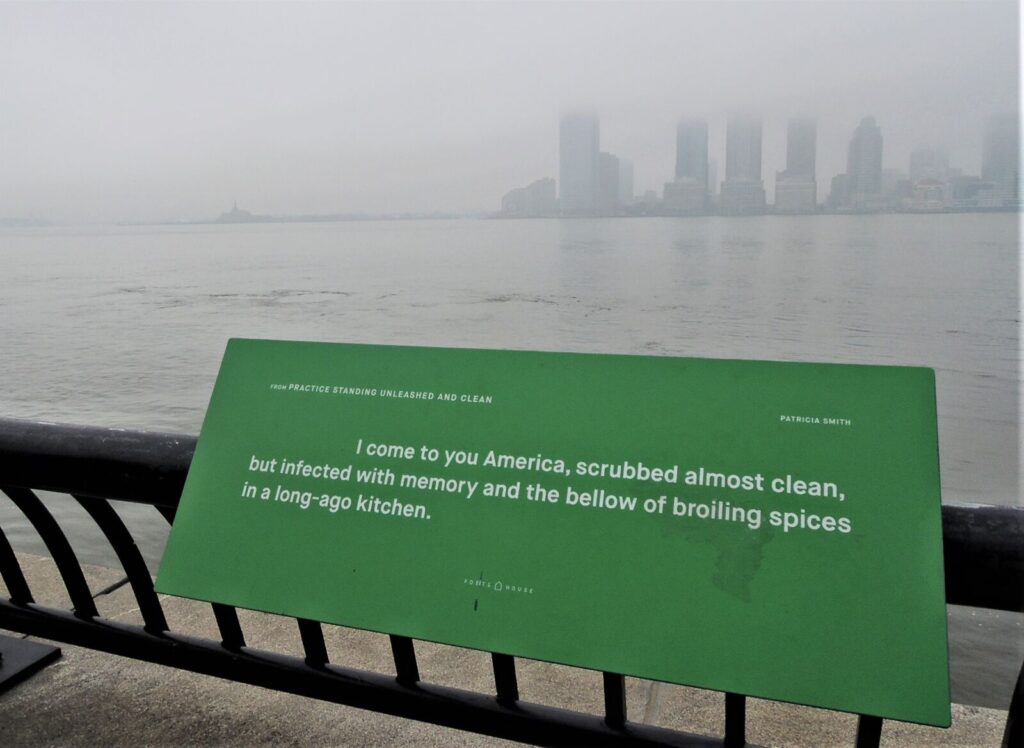 Practice Standing Unleashed and Clean by Patricia Smith (born 1955)
…I traveled with a whole chattering country’s restless mass
weakening my shoulders. But I offer it as both yesterday
and muscle. I come to you America, scrubbed almost clean,
but infected with memory and the bellow of broiling spices
in a long-ago kitchen. I come with a sickness insistent upon
root in my body, a sickness that may just be a frantic twist
from one life’s air to another. I ask for nothing but a home
with windows of circled arms, for a warm that overwhelms
the tangled sounds that say my name.–https://poets.org/poet/patricia-smith 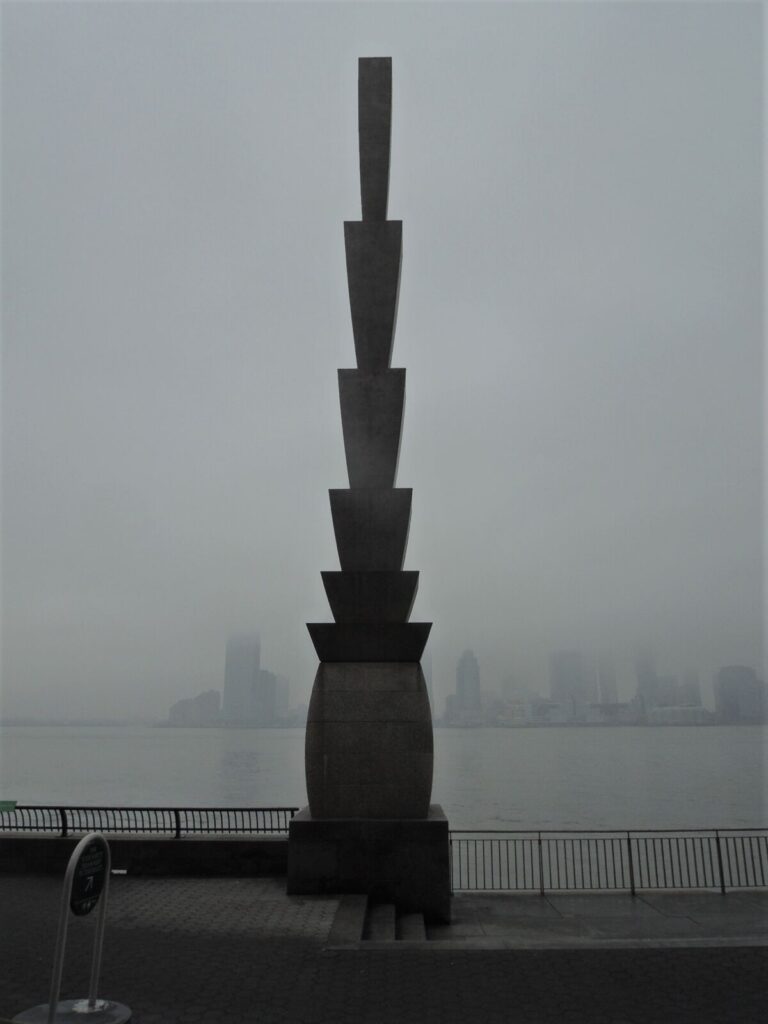 “Martin Puryear’s stately Pylons (1995) rise along the waterfront of the Belvedere, framing the sightlines of the Winter Garden. Both columns are made from stainless steel and are composed from six segments. In their contours they are a study in opposites. One is solid and all angles, thrustting downward; the other, an airy, volumetric weave of steel mesh gracefully spirals upward. Situated between the ferry dock and the North Cove Harbor, the Pylons are designed to be viewed from either land or water as a symbolic portal connecting the two. By day, they give the waterfront an identifiable landmark. By night, the two opposing columns are dramatically illuminated like beacons.” 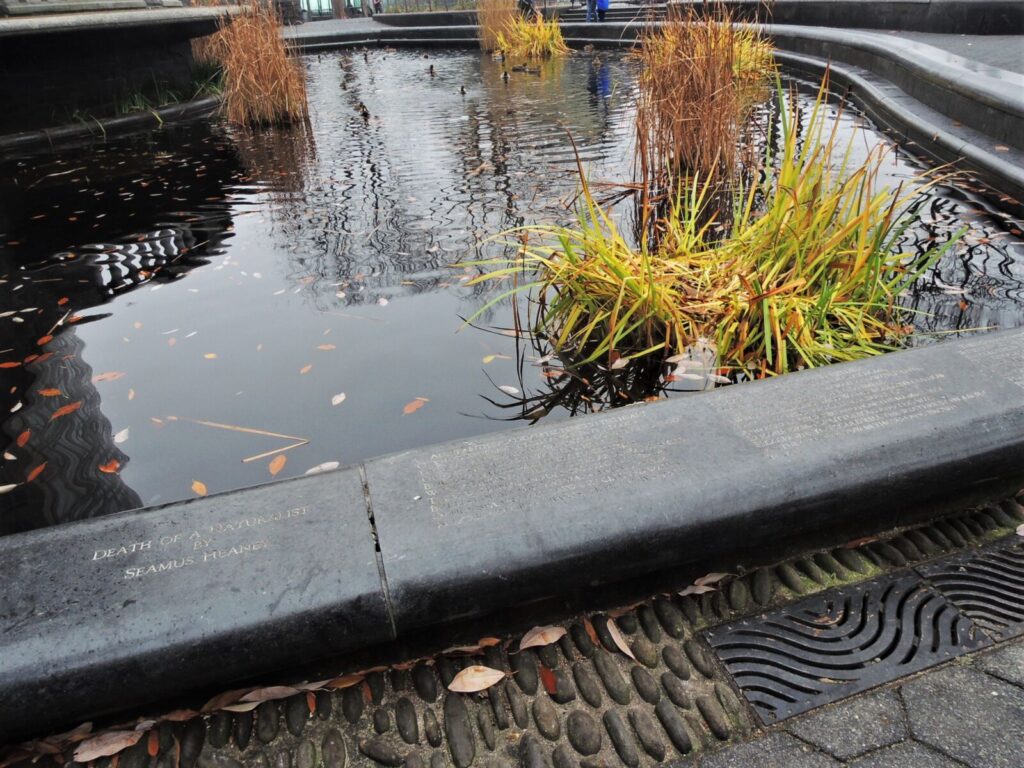 Death of a Naturalist by Seamus Heaney
All year the flax-dam festered in the heart
Of the townland; green and heavy headed
Flax had rotted there, weighted down by huge sods.
Daily it sweltered in the punishing sun.
Bubbles gargled delicately, bluebottles
Wove a strong gauze of sound around the smell.
There were dragonflies, spotted butterflies,
But best of all was the warm thick slobber
Of frogspawn that grew like clotted water
In the shade of the banks. —https://www.poetryfoundation.org/poems/57040/death-of-a-naturalist 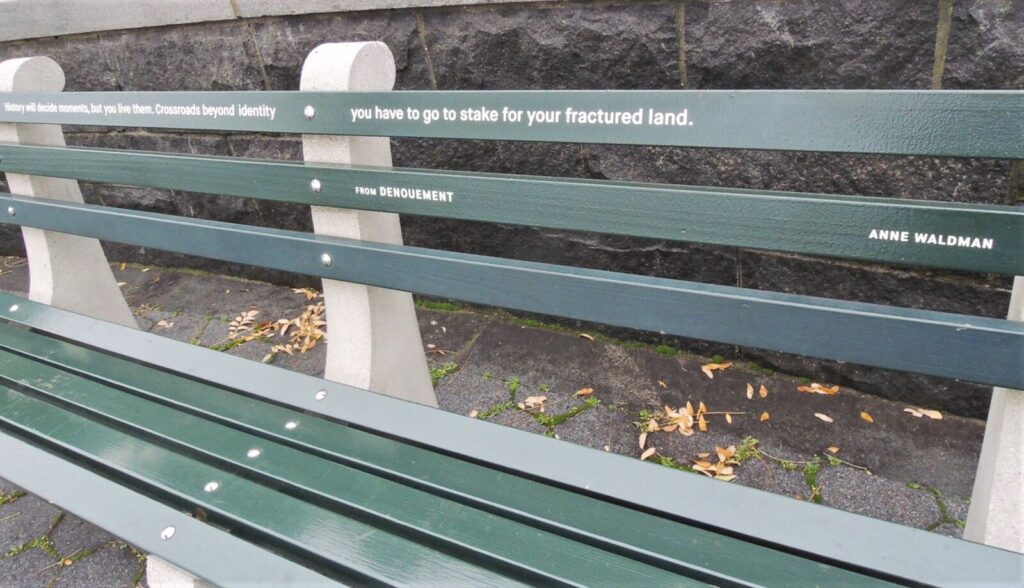 Trickster Feminism by Anne Waldman
History will decide moments, but you live them. Crossroads beyond identity you have to go to stake for your fractured land. Place where forces gather. They could put you away, rights stripped down, murder you. Shadowy nimble trickster comes mysteriously out of twilight, walking backward, walking sideways and flying in air too. Scrying the tracks & flight patterns you will come to when we’ve forgotten how to read: Rescue. 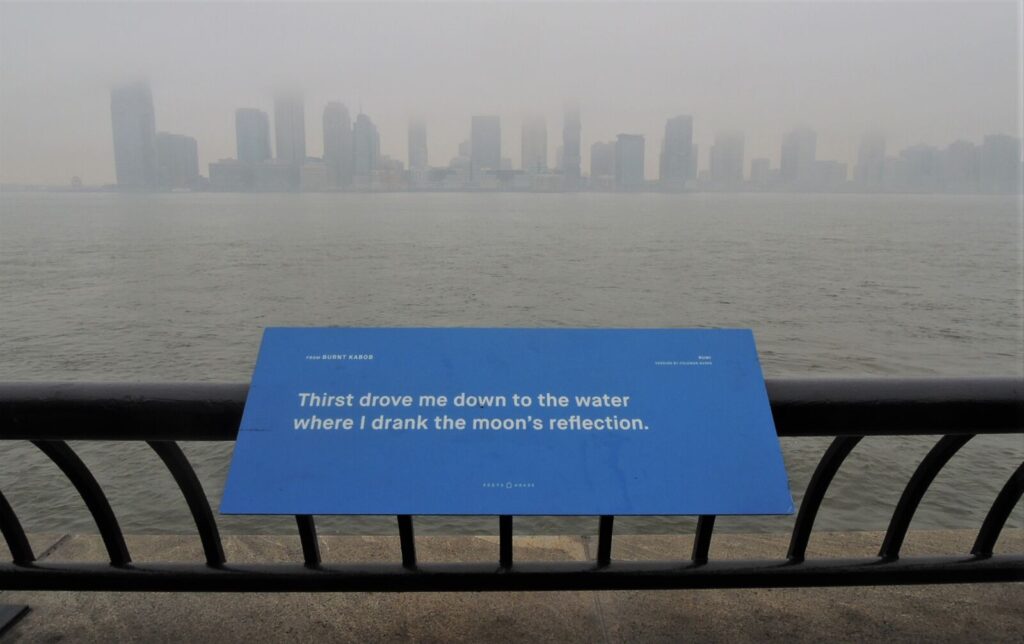 Thirst drove me down to the water, where I drank the moon’s reflection.–Jalāl ad-Dīn Muhammad Rūmī, also known as Rumi (1207–1273) 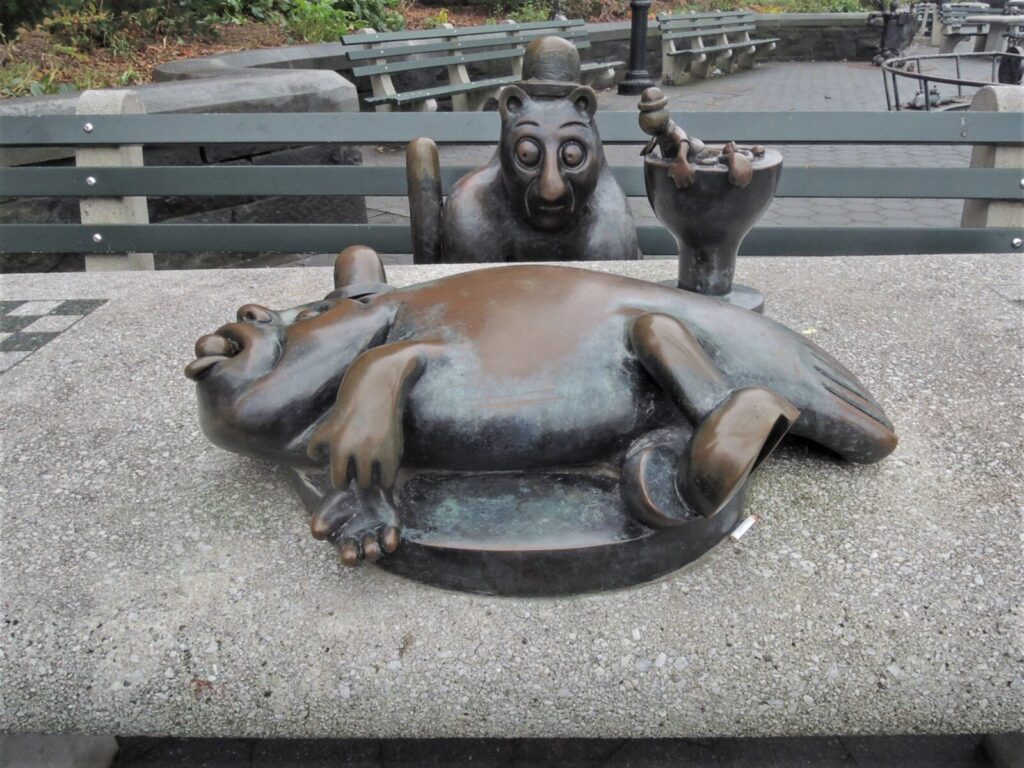 “Taking over its corner of the park with gleeful abandon, Tom Otterness’ whimsical sculptural installation entitled The Real World is one of New York’s most popular public artworks. Cast in bronze, the sculptures feature Otterness’ signature cartoonish figures: animals and people, banks and robbers, laborers and pilgrims, predators and prey, all rubbing shoulders in his delightfully loopy narrative world.”