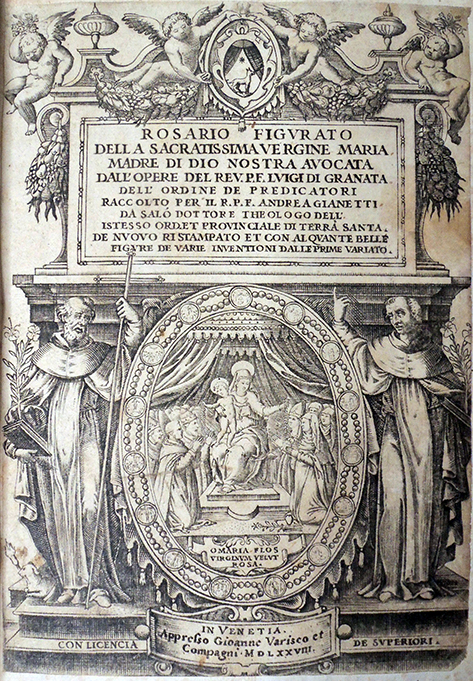 Engraved allegorical title page by Adamo Scultori (1530–1585) with a medallion scene of the Virgin and Child, flanked by Saint Dominic and Saint Vincent. Note the close trimmed print. 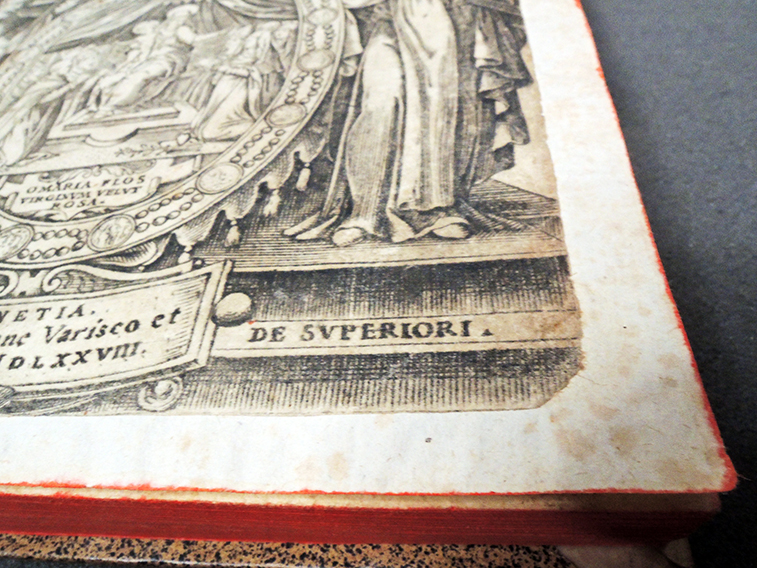 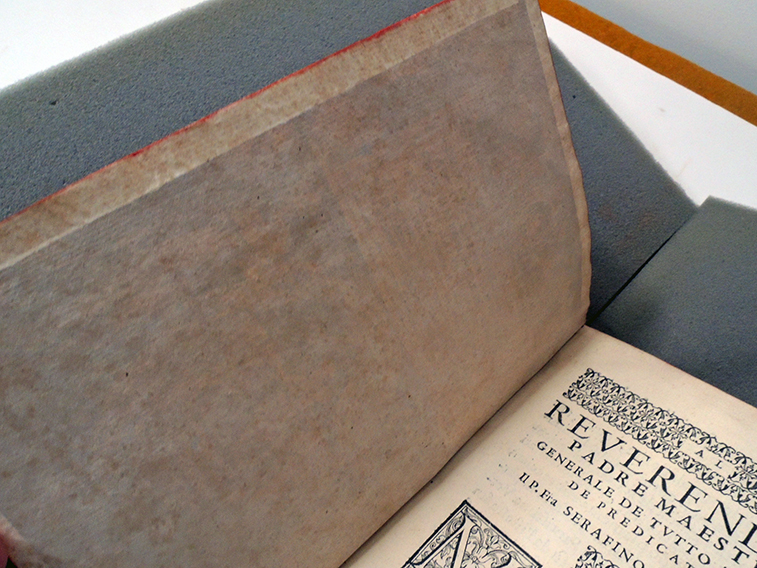 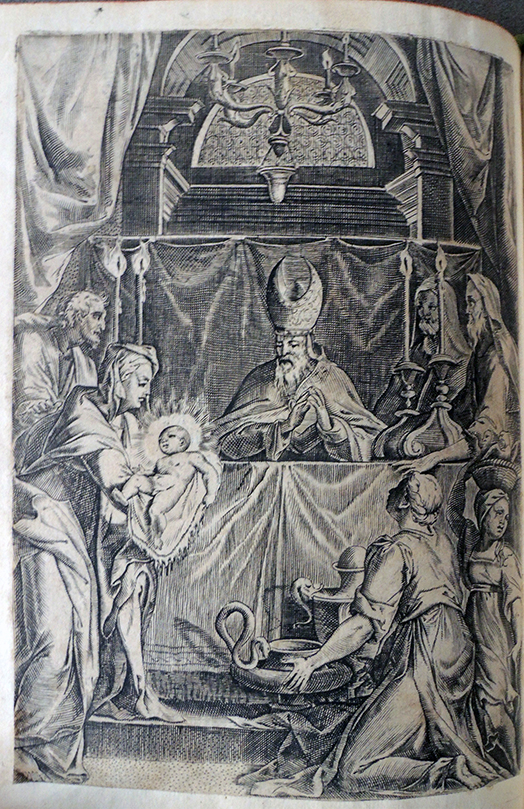 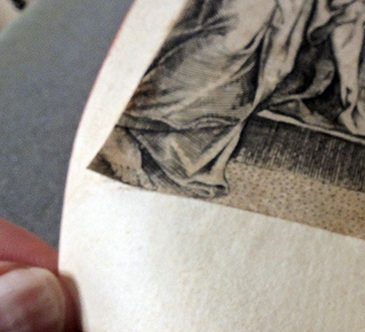 When the information on this new acquisition is loaded into our online catalogue in a few weeks, the link to this physical book will probably disappear, superseded by one for the Hathi Trust digital copy. During this odd year, it is one or the other. This is too bad, given the unique material properties of our copy.

First published in 1573, compiled by the Dominican Andrea Gianetti da Salò (d. 1575) from the writings of Luis de Granada (1504–1588), the book offers a guide to the fifteen mysteries of the Rosary. Scultori’s engravings caught the attention of the book’s many reader, leading to its reprinting over twenty times in the following thirty years. When Scultori’s plates became worn, they were sometimes re-engraved in later editions. This 1578 Varisco edition holds a number of prints beginning to show wear.

What is most interesting in this individual book are the rich, dark prints someone pasted on top of seven original engravings, a conservation procedure not yet found in any other copy. Our dealer notes “The lack of other similarly ‘improved’ copies seems to indicate a later intervention rather than something made at the time of printing, although the skill with which the new engravings have been pasted suggests a professional, maybe a seventeenth- or eighteenth-century binder or bookseller, rather than a former owner. See: Mortimer 218 (for the 1573 edition).” 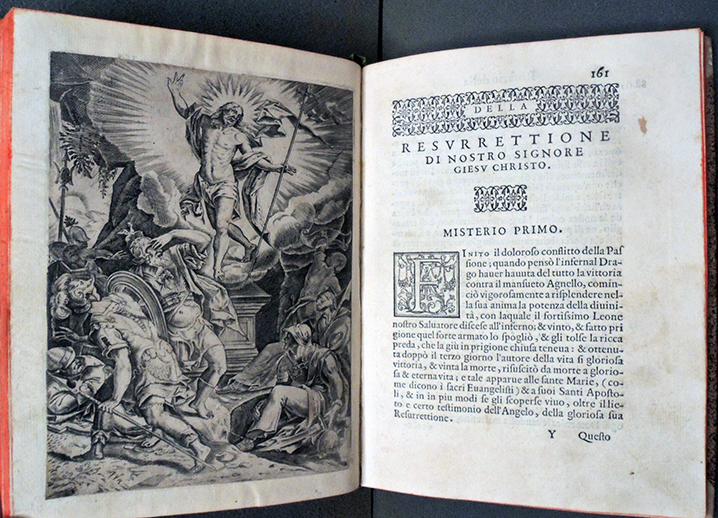 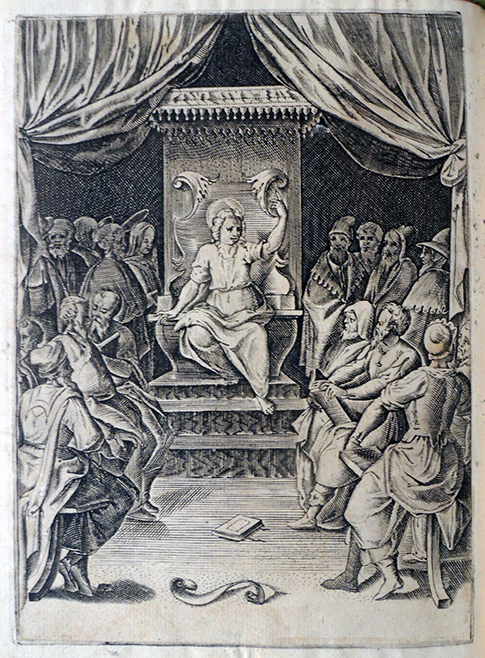 Here are some biographical details on Adamo Scultori (1530–1585) from Brown University:

Son of the Mantuan sculptor Giovanni Battista Mantovano (Mantuano) and brother of the engraver Diana Mantovana (Mantuana, Scultori), Adamo, like his sister, was taught to engrave as a child by his father. His earliest known work, done when still a youngster, was a series of figures from Michelangelo’s Last Judgment fresco in the Sistine Chapel. His made many engravings after the Roman court artist in Mantua, Giulio Romano, and also after the antique. He also engraved frontispieces for book illustration, and in the case of the phlebotomy manual Discorsi di Pietro Paolo Magni Piacentino sopra il modo di sanguinar… he not only designed and engraved the frontispiece of Magni’s first, 1584 edition, but also engraved–and most likely designed-the other illustrations in the book. He was active as a print dealer and publisher in Rome between ca. 1577-80. 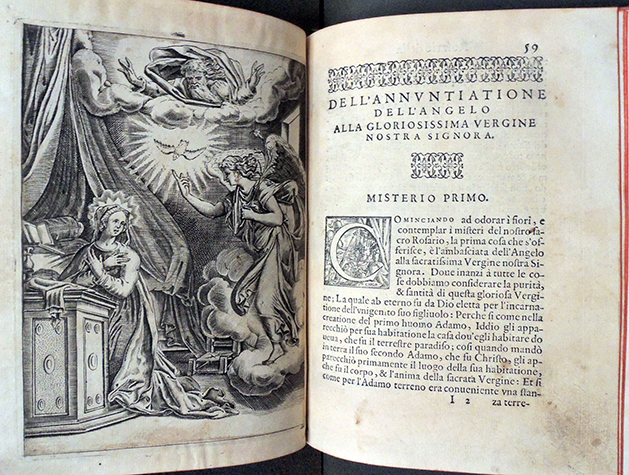 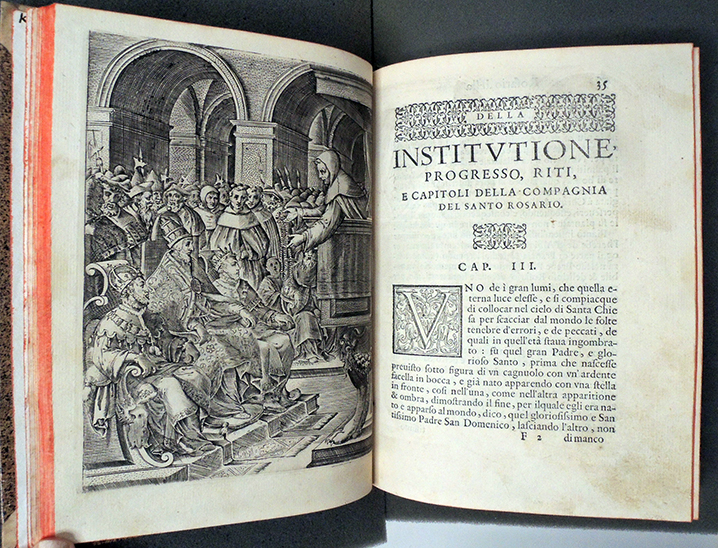