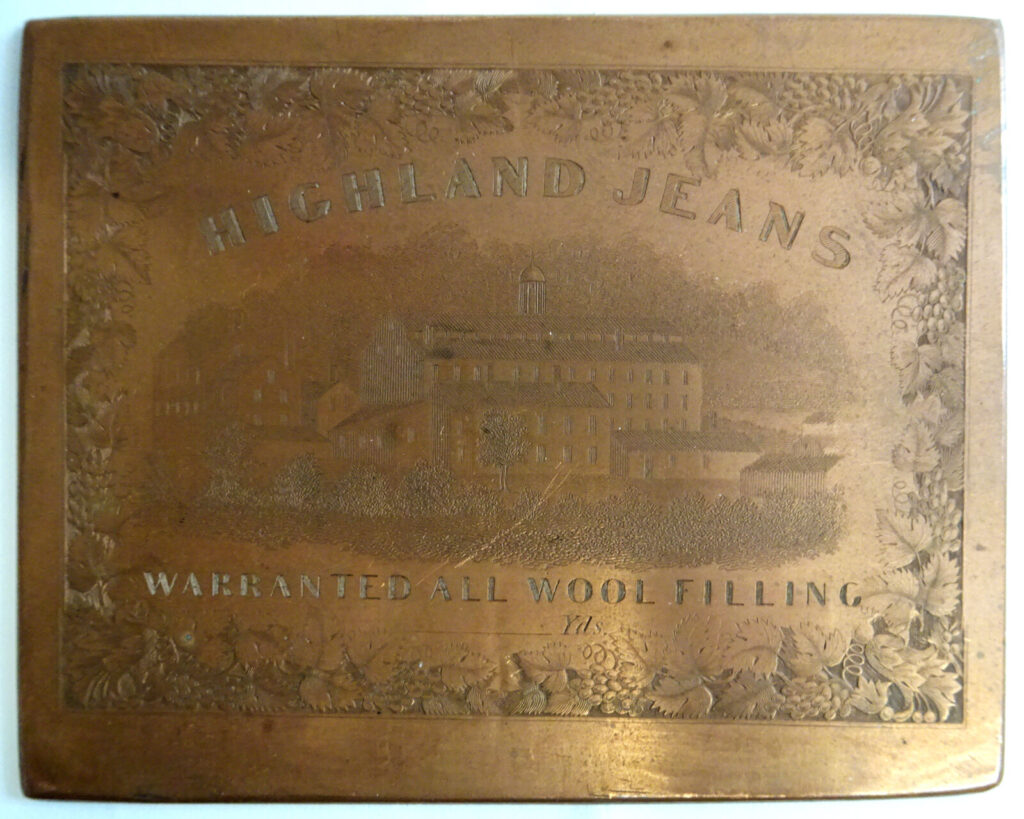 Copperplate laterally reversed above, as engraved below 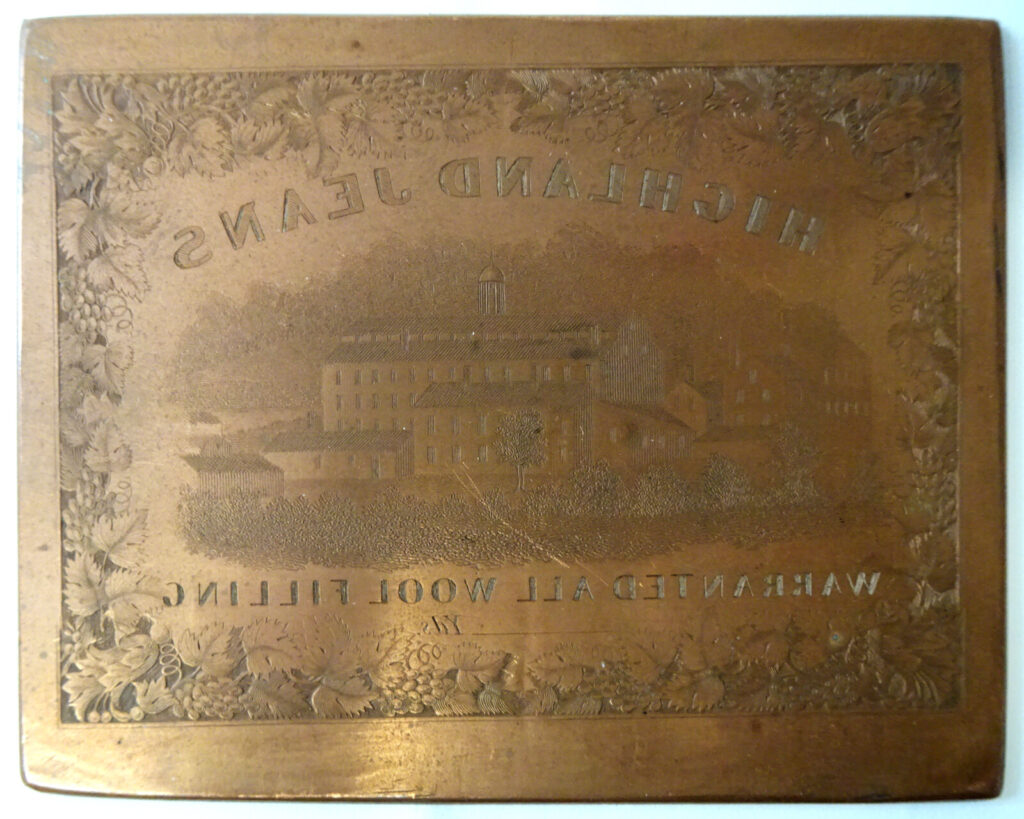 With sincere thanks to W. Allen Scheuch II, Princeton Class of 1976, the Graphic Arts Collection has an early 19th-century engraved copper plate from the Highland Jeans company. There is no information on this manufacturer other than a series of 1839 dry-goods advertisements by Samuel Seay in Tennessee.

In searching historic cotton and woolen mills from the time, in that area, John N. Lovett, Jr has written a detailed survey available online. A small section is posted below. 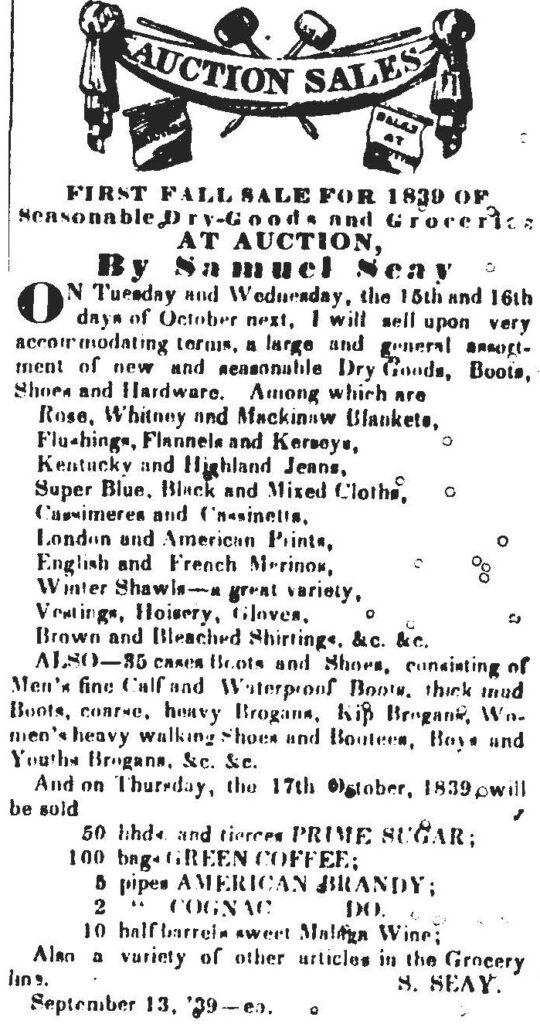 The manufacturers of textile machinery found their beginnings well before the Civil War, primarily in the New England area. Prior to that time, almost all textile machinery was built in England. The primitive machines fabricated in the United States in the years following Samuel Slater’s arrival in Rhode Island in the 1790’s were hand-crafted by artisans according to specifications furnished by a handful of knowledgeable people. The first machines built were carding machines, similar to the one surviving in Ketner’s Mill in Marion County. The spinning jack, a vast improvement over the jenny, was invented in England around 1810, and began to appear in American textile mills in New England circa 1820. Power looms first appeared in New England about 1815.

By the 1840’s, all these machines were universally employed in the larger textile factories. It is obvious from the surviving schedules of the 1820 Census of Manufactures for Tennessee that several carding machines were in operation. There are also some references to spinning factories prior to 1820 in the state, but these recollections are often difficult to verify. One source accepted as reliable is Eastin Morris’ Tennessee Gazetteer of 1834. This remarkable work includes references to three spinning factories, six cotton factories, and a cotton/woolen mill in the state. It is also known that several textile factories were in production in the state in the 1840’s. By this time, large manufacturers of textile machinery were established in New England. Some of the better known are highlighted below.

The Davis and Furber Company of North Andover, Massachusetts, was established before the Civil War, and survived until recent years. It was perhaps the longest-lived and largest manufacturer of most types of textile machinery, including pickers, cards, and spinning jacks and mules. The only product of this company known to survive in Tennessee is an 1866 Davis and Furber finishing card at Falls Mill in Franklin County. Crompton Loom Works. In the early 1840’s, a large textile mill in Massachusetts put into operation several power looms designed by a newly emigrated British mechanic named William Crompton. Soon after, the Crompton Loom Works was established in Worcester, Massachusetts. William’s son George took over the business later, and by 1876 the company was producing an extensive line of looms of many types. The company became Crompton and Knowles and continued to build looms well into the twentieth century. The only Crompton looms known in Tennessee are the three in the Falls Mill collection, two small plain looms and a large broad loom, manufactured in the early 1870’s.

Rhode Island manufacturer William Dean Davis began his business selling kerseys and linseys, for example, but in 1839 added all-wool jeans and plains. Jean was most commonly all cotton or cotton warp with a woolen weft, in a twill (diagonal rib) weave, and categorized with other durable fabrics meant for working clothes, such as fustian and denim.–Historic Context Evaluation For Mills In Tennessee by John N. Lovett, Jr., Ph.D. https://rosap.ntl.bts.gov