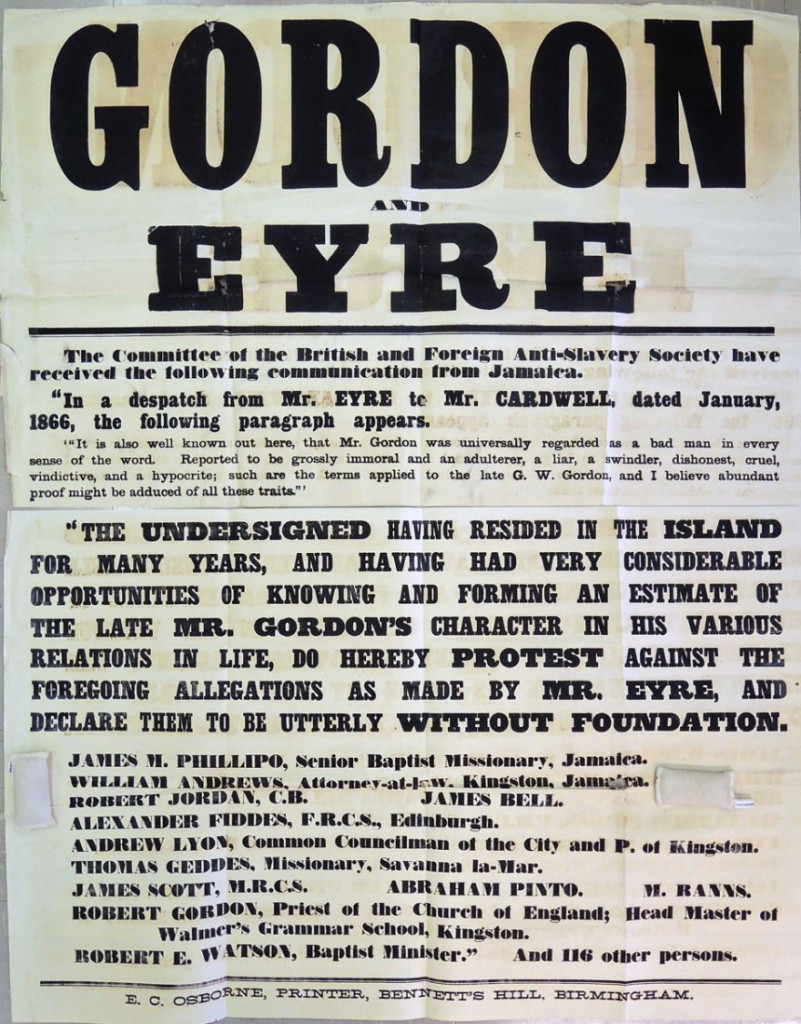 In 1976, the Bank of Jamaica issued a new $10 note featuring George William Gordon (1820-1865) on the bill. Gordon, who was hanged following the October 11, 1865 insurrection known as the Morant Bay Rebellion, was finally being recognized as a patriot and a national hero.

Many appreciated his work at the time. On December 26, 1865 The New York Daily Tribune ran the headline “George William Gordon, the Jamaica Martyr.” The article began, “In the person of the late George William Gordon, Jamaica has just added another name to the list of those who have sealed their devotion to liberty with their lives; another victim to the accursed spirit of negro Slavery.”

Gordon was the son of a Scottish plantation owner and one of his slaves. The self-educated businessman joined the Jamaica House of Assembly and became an advocate for social reform in Jamaica. Although not directly involved in the Morant Bay events, Gordon was arrested and convicted of inciting the riot. He was hanged on October 23 of that year.

Edward John Eyre (1815-1901) was an English land owner and the Governor of Jamaica who called for Gordon’s arrest. Eyre was himself later tried for his part in the rebellion and subsequent murders.

“Gordon and Eyre. The committee of the British and Foreign Anti-Slavery Society have received the following communication from Jamaica. “In a dispatch from Mr. Eyre to Mr. Cardwell, dated January, 1866, the following paragraph appears. ‘It is also well known out here, that Mr. Gordon was universally regarded as a bad man in very sense of the word. Reported to be grossly immoral and an adulterer, a liar, a swindler, dishonest, cruel, vindictive, and a hypocrite; such are the term applied to the late G. W. Gordon, and I believe abundant proof might be adduced of all these traits.’ We the undersigned having resided in the island for many years, and having had very considerable opportunities of knowing and forming an estimate of the late Mr. Gordon’s character in his various relations in life, do hereby protest against the foregoing allegations as made by Mr. Eyre, and declare them to be utterly without foundation …” [followed by the names and residences of 12 respectable citizens of Jamaica].

This is the only recorded copy of the broadside in the United States. For a photographic record of the Jamaica rebellion, see: http://pudl.princeton.edu/objects/736664580