Frank Lloyd Wright (1867-1959) visited Princeton University many times over his long career. The first and perhaps most important visit was in 1930, when Wright accepted the Kahn lectureship and delivered a series of six illustrated lectures in McCormick Hall. Modern Architecture; Being the Kahn Lectures for 1930, was published the following year by Princeton University Press (we hold 6 copies of the original NA680 .W93). Not content to write the book, Wright also designed the book’s cover, which has become iconic with the man and his work.

The Princeton University Weekly Bulletin (May 3, 1930) announced that “starting today and continuing through May 14th, a series of lectures will be presented by Frank Lloyd Wright on the problems of Modern Architecture. . . . . Today he will speak on the topic, ‘Machinery, Materials, and Men,’ following tomorrow with ‘Style in Industry; the War on Styles.’ His lecture Thursday, ‘The Cardboard House,’ gives promise of being most interesting, and his concluding speech of the week, on Friday, ‘The Passing of the Cornice,’ will take up a trend of modern architecture, which is very noticeable in the work being done today. One week from today he will deliver an address on ‘The Tyranny of the Skyscraper,’ ending his series at Princeton with a talk entitled ‘The City.'”

Wright brought with him a group of recent drawings, which were placed on display in the Museum of Historic Art (an early space that included galleries, the art and archaeology department, the fine arts library, and the School of Architecture). The Bulletin claims that “this will be the first time that Mr. Wright’s drawings have been shown to the public, and they will go on a tour after remaining in the Architecture Building for several days.” Simply titled “The Show,” the traveling exhibit included 600 photographs, 1,000 drawings, and four models that were seen in New York City; Chicago; Eugene, Oregon; Seattle, Washington; several European cities; and Milwaukee’s Layton Gallery.

In the spring of 1933, another exhibit to include Wright’s designs was held in McCormick Hall entitled Early Modern Architecture: Chicago 1870-1910. Prepared by the Museum of Modern Art in New York, this show had the extra special feature of wall labels written by Philip Johnson, Chairman of the Museum’s Department of Architecture, and Professor Henry Russell Hitchcock of Wesleyan University. 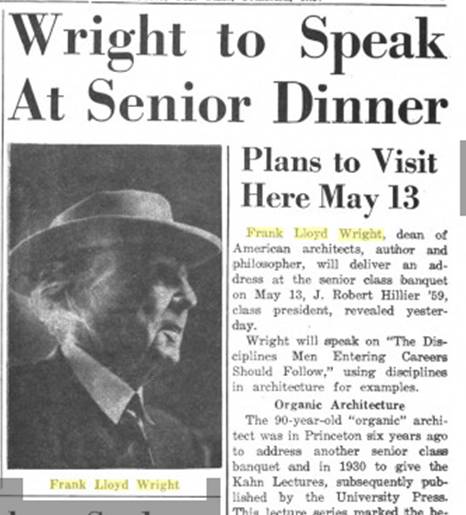 Wright returned to Princeton in 1947 for a two day conference in connection with the University’s bicentennial celebration. “Planning Man’s Physical Environment” brought together 70 architects, city planners, philosophers and social psychologists under the direction of Arthur C. Holden, Class of 1912.  Wright used his time to plead for the decentralization of American cities, telling the students, “we are educated far beyond our capacity.  We have urbanized urbanism until it is a disease—the city is a vampire, living upon the fresh blood of others, sterilizing humanity.”

In 1955, Wright was invited to be the principal speaker at that year’s Senior Class dinner. He happily agreed but at the last minute asked to have the dinner rescheduled while he attended to construction problems with the Guggenheim Museum building.  The 800 students and their guests didn’t seem to mind and in fact, his talk was so memorable that the class of 1959 invited him back. Unfortunately Wright passed away one month before the Princeton event.