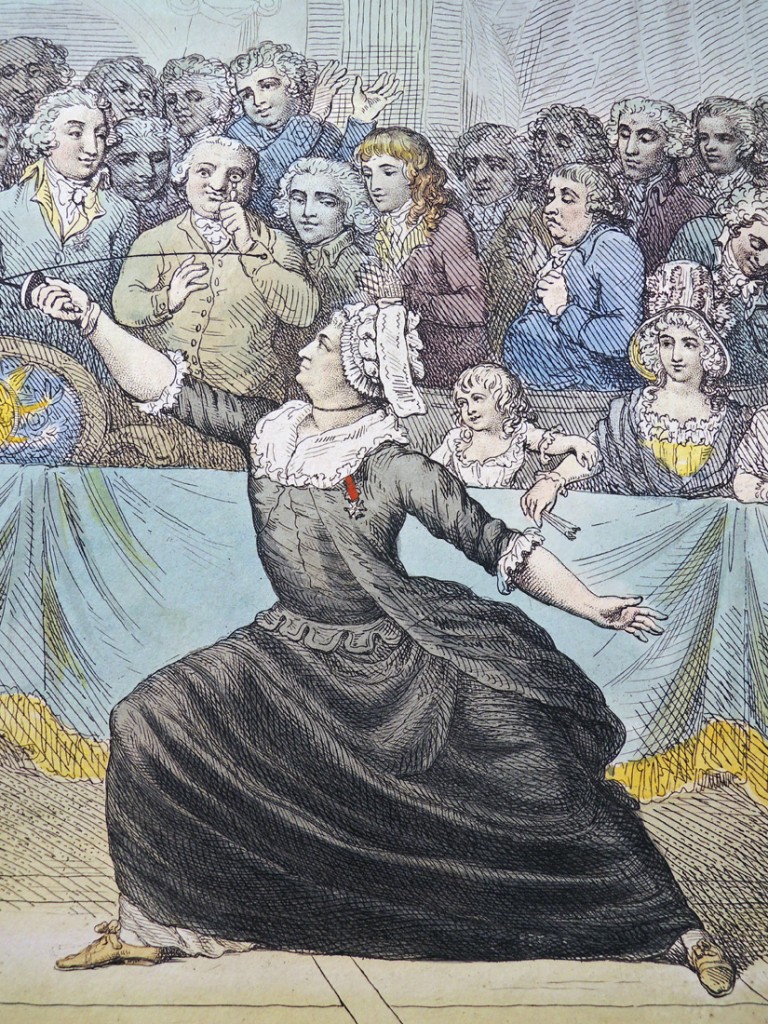 Six years ago, we posted this engraving entitled The Assault, or Fencing Match, which took place at Carton House on the 9th of April, 1787, a gift from Dickson Q. Brown, Class of 1895. It has been a popular print both for the image and the subject. Charles Geneviève Louis Auguste André Timothée d’Éon de Beaumont (1728-1810), commonly known as the Chevalier d’Eon, lived the first half of his life as a man and the second half as a woman. He also served as a spy to Louis XV, 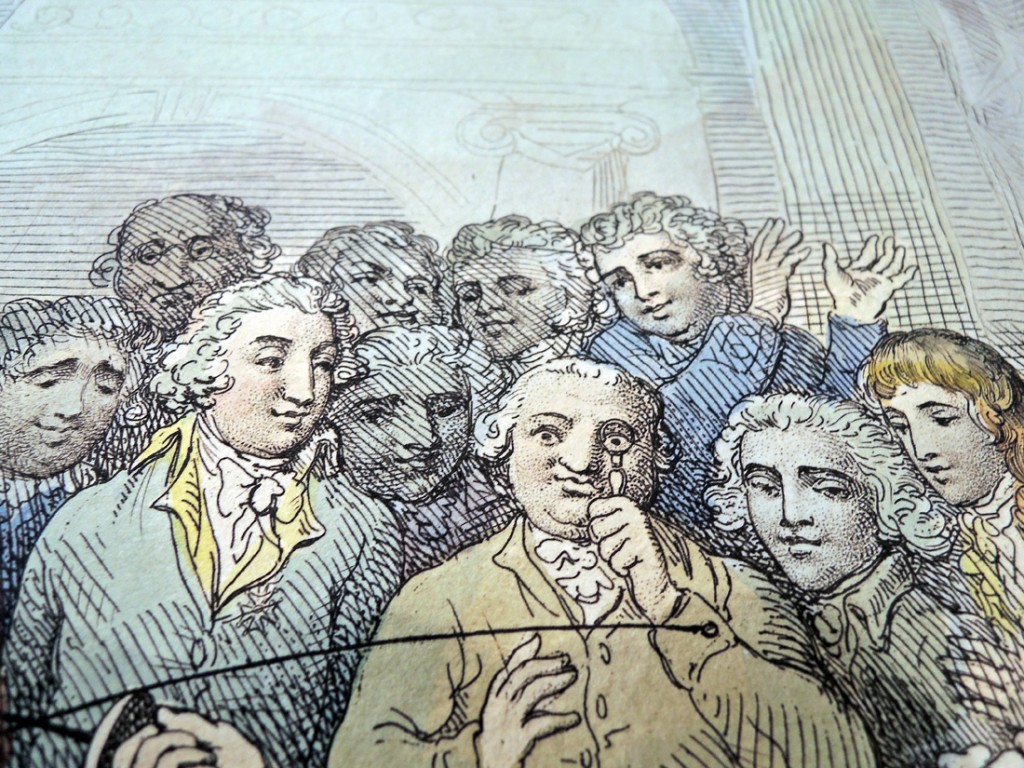 Thanks to recent communication with Malcolm Fare, who established Britain’s National Fencing Museum in 2002, we have new information on this print. Fare’s collection includes “a library of over 300 books, 250 paintings and prints, 200 weapons, numerous masks, kit, trophies, posters, programmes, medals, stamps, postcards and other ephemera.” He also owns several copies of this print, in it various impressions and has helped to identify the one held by Princeton. His comments are posted with his permission.

“The print shown on the Princeton website with its caption in English is actually a restrike issued in the 1840s of the original Gillray print published in 1787. I have both. The original has Gillray’s name below the bottom left-hand corner and a French caption that reads Assaut d’Armes donné a Carlton House, le 9 Avril 1787 entre la Chevaliere D’Eon De Beaumont, et le Chevalier De Saint George en la presence de Son Altesse le Prince de Wales la Noblesse & plusieurs Célébres Maitres d’Armes. The restrike erased Gillray’s name, added a new caption in English and also the print number 375 above the top right-hand corner.

The painting in the Royal Collection by Robineau was commissioned by the Prince of Wales and ‘tweaked’ to make it acceptable to his father, George II, in that the figure of his woman companion — clearly shown by Gillray to be the Prince’s common-law wife Mrs Fitzherbert — has been changed to that of a boy in wide-brimmed hat. There are several other differences between the two versions of this famous match. The French printmaker Picot then reproduced Robineau’s painting (with one small difference) in 1789.” 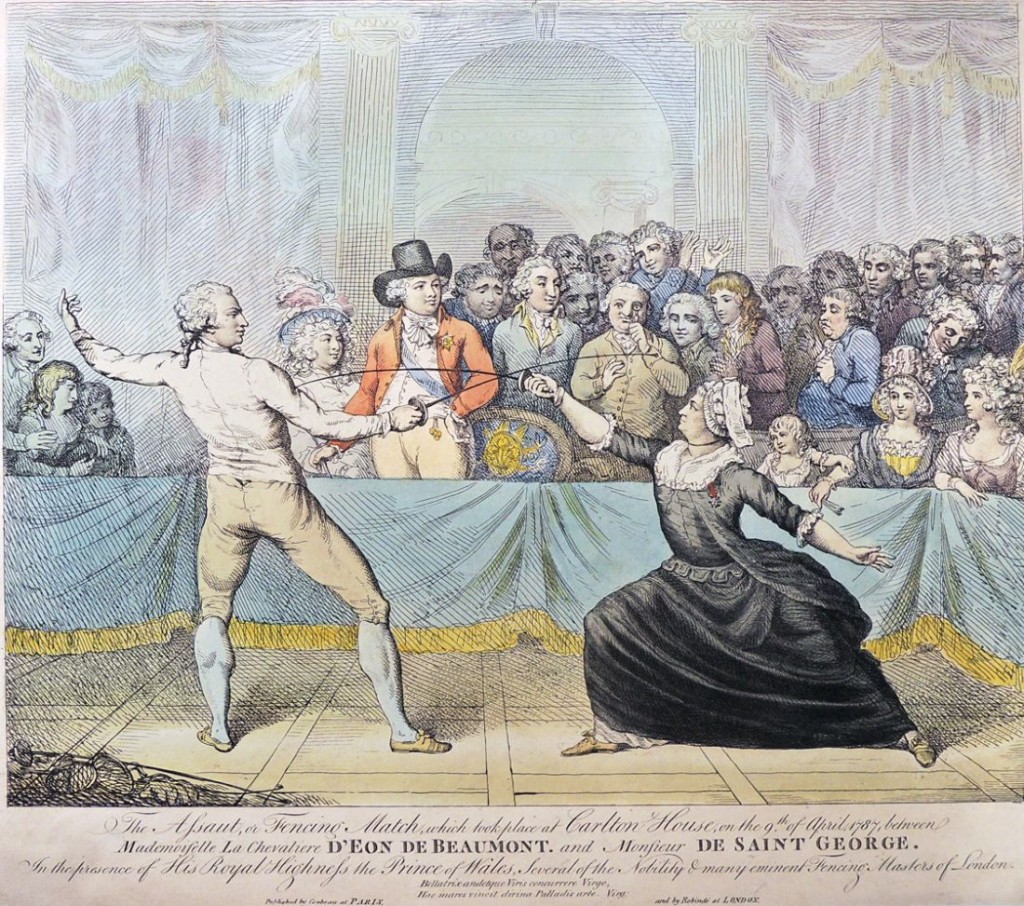 With thanks to Mr. Fare, we have changed the cataloguing and attribution of our restrike. For more information, see Gary Kates, Monsieur D’Eon is a Woman: a Tale of Political Intrigue and Sexual Masquerade (New York: Basic Books, 1995). Firestone Library (F):, DC135.E6 K37 1995