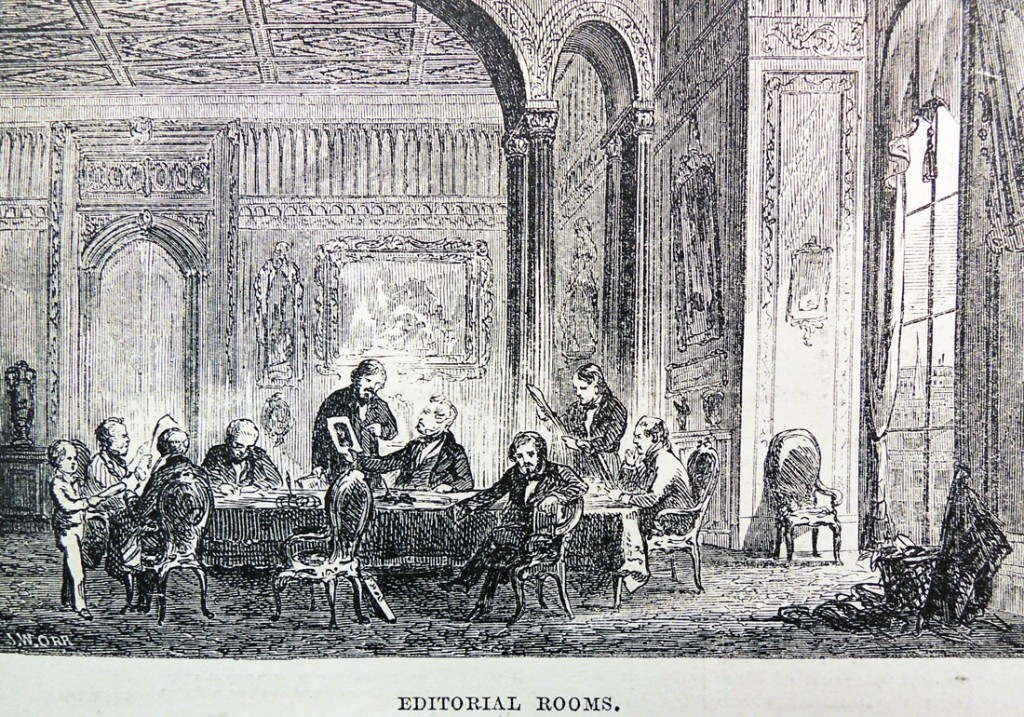 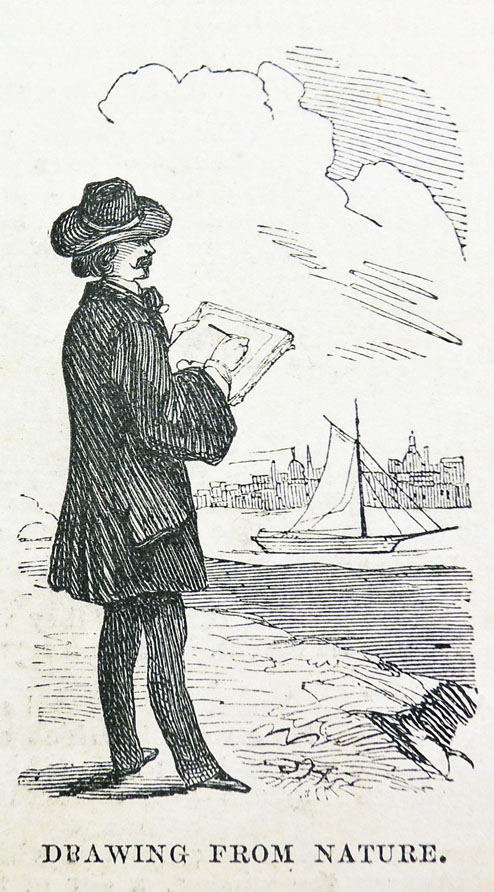 After his first year publishing Frank Leslie’s Illustrated Newspaper successfully, Leslie printed a long and detailed description of how the illustrations for his paper were accomplished. This is something several other American papers had failed to perfect and so, everyone took notice.

This post includes a long section of that text, along with the illustrations that accompanied the August 2, 1856 article. Note especially the physical cutting out of the whites in each matrix.

These illustrations were cut by the Irish/American wood engraver John William Orr (1815-1887), who was much in demand as a book and magazine illustrator and engraver.

A complete transcription can be found here: how illustarted newpapers are made 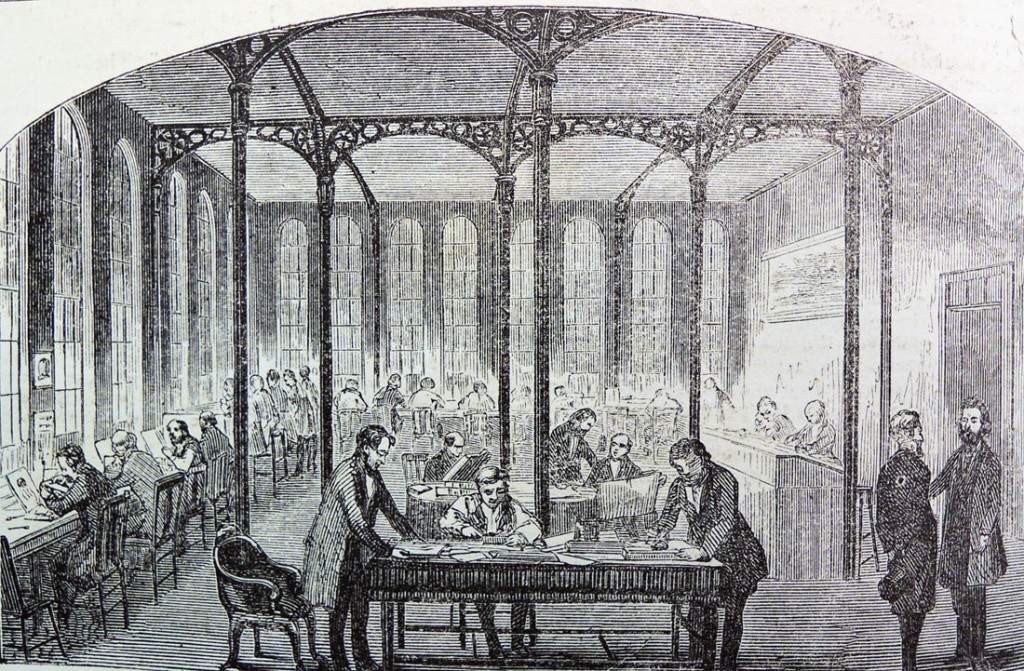 “. . . Immediately one or more artists are dispatched to the point of interest, and by long experience hasty sketches are made that are to be elaborated when put on the wood, which is the next stage of their advancement. The wood used is that known as “boxwood,” so much a favorite as a shrub in our gardens, but which in Turkey expands by slow growth into a tree with a trunk of a few inches in diameter. 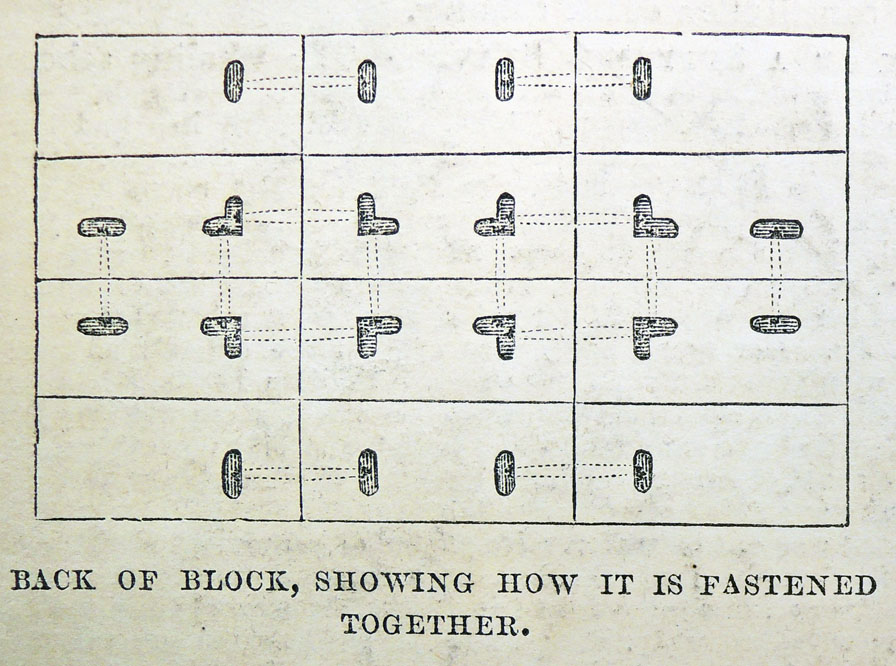 This valuable product is nearly as hard as flint, and can be cut with great precision. From the diminutive size natural to its growth, it is only possible to produce pieces large enough for the purposes of an illustrative paper by joining innumerable small bits together and fastening them by screws on the back of the block, as will be seen by the engraving.

The art required to perform this apparently simple mechanical process cannot be understood except by those directly engaged in the business, or by those who have to use the wood to print from after it is engraved. The block of wood having been selected, and the “travelling artists” having supplied the subject, other artists again are employed in putting the design on the block, which when done is one of the most beautiful works of art without color that can be imagined. 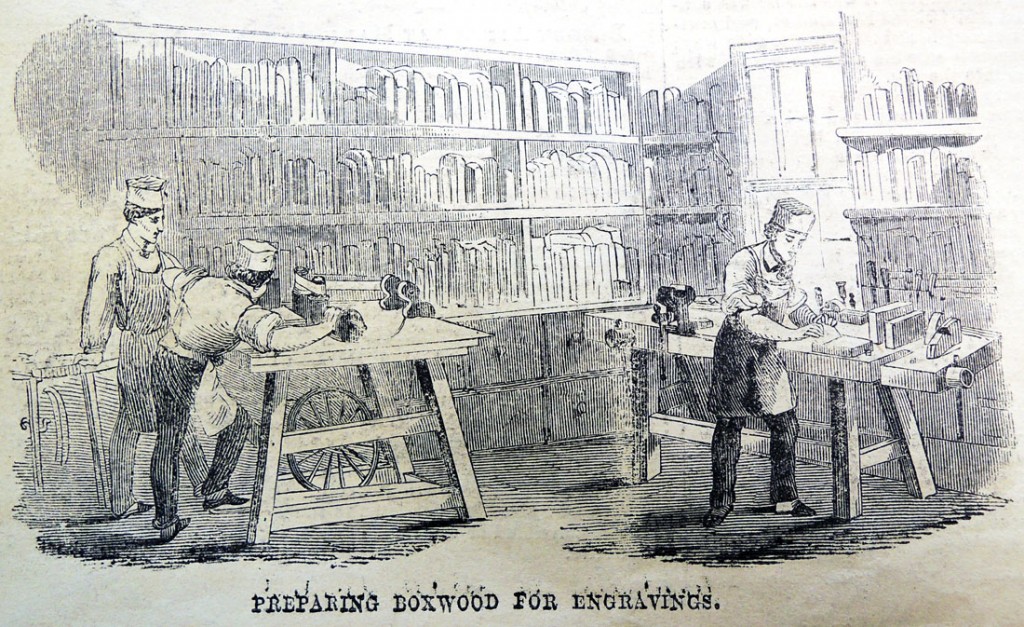 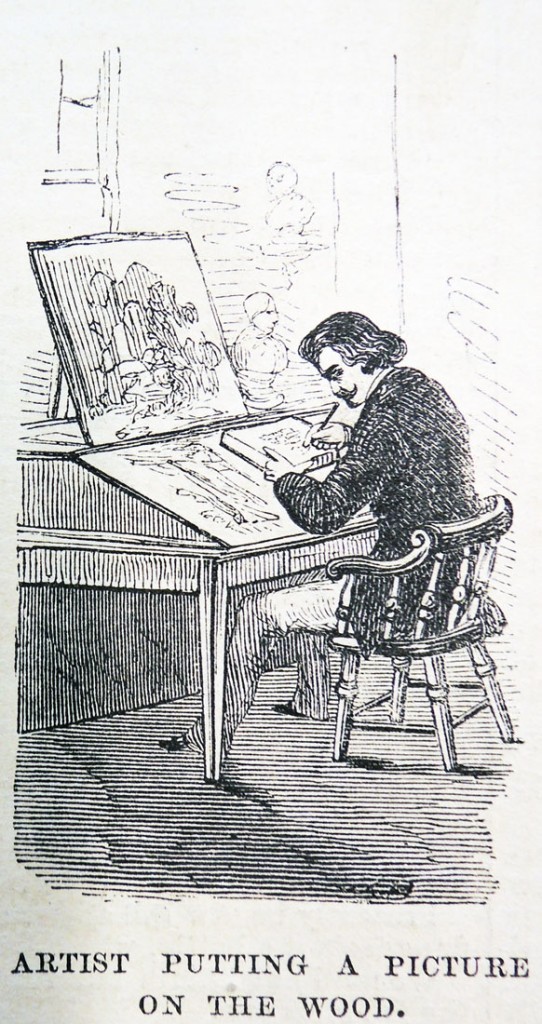 The hour of publication is near at hand, and here we have a two-page picture to be engraved, which cannot be completed by a single hand under several days of hard labor. What is to be done?

The screws which hold the small parts of the wood together are unloosened, and the block is divided into ten or twenty parts. Upon each there is but the fragment of the drawing; one has a little bit of sky, another a group of children cut in two in the middle . . .

Ten or fifteen engravers now seize these fragmentary pieces, and work night and day; not a moment is lost; they silently and industriously pursue their work, and the surfaces of the several blocks are cut away save where they are marked by the image of the artist’s pencil, and we have left the surface which makes the impression on our paper known as a wood engraving. 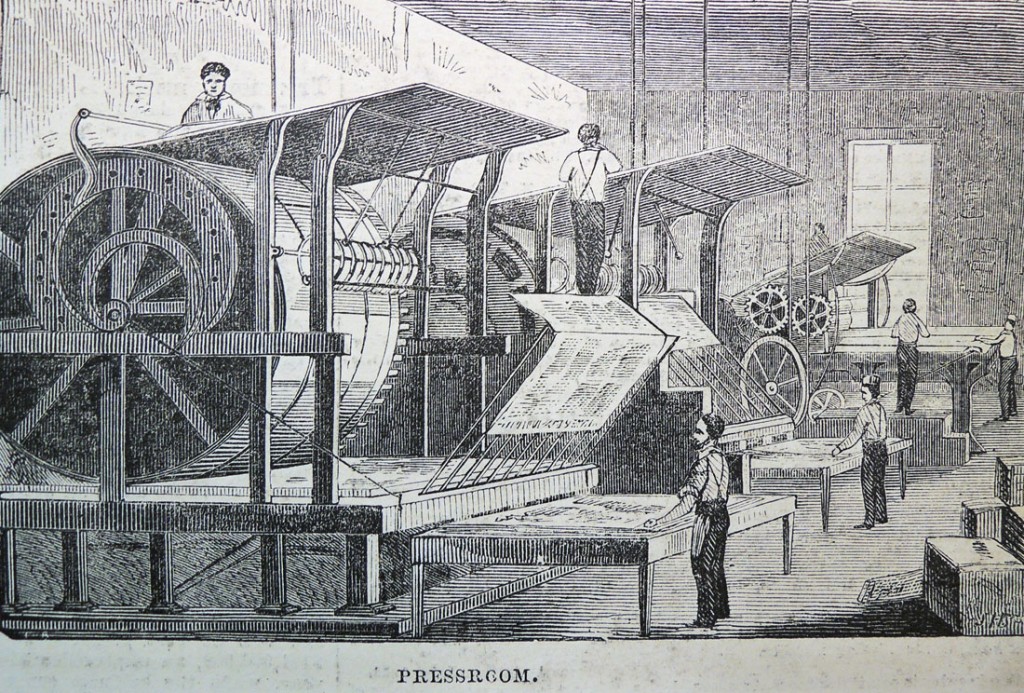 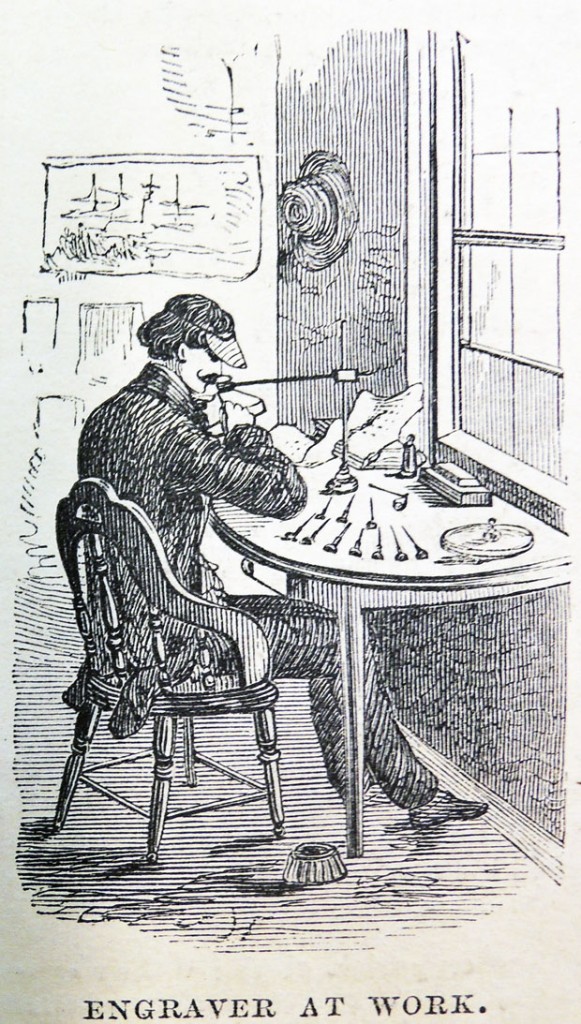 “The engravers’ tools are very few in number, and very simple in construction. They are called:

1. Flat tool; 2, 3, 4 and 5, gravers; 6 and 7, tint tools; 8, sand-bag and stand on which the block is laid; 9, scraper; 10, chisel—and cost comparatively but a small sum; yet with these simple tools the engraver, with an incomprehensible certainty to the spectator, runs through the complicated outlines of the innumerable forms with make up the pictures of our weekly edition, displaying a skill of handling to our notions as wonderful as the touch of the artist himself. 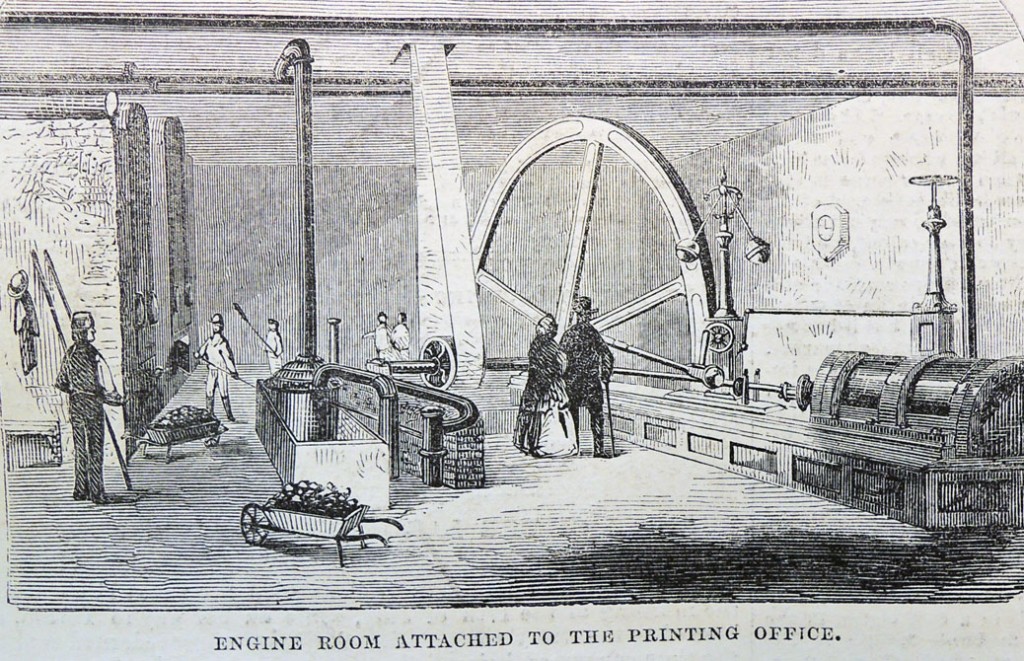 …The highest mechanical ingenuity is brought into requisition to create a “cylinder press,” one of which will quietly perform the labor of many hands; and do it with a neatness and dispatch impossible to be obtained in any other way. In forms put upon the press filled with engravings is used what is termed an “overlay,” the construction of which requires much experience.

An impression is taken of each engraving on thick paper, and then, they are laid upon a table, and by a sharp knife all the white parts of the picture are removed; when this is done, the dissected picture is put upon the cylinder of the press in such a way as to make unusual pressure upon the engraving, or especial parts of it, while being printed. It is in this way that such brilliant effects are often produced. Were this otherwise, the pictures would come up with the same even tone, so peculiar and so beautiful to solid columns of type.” 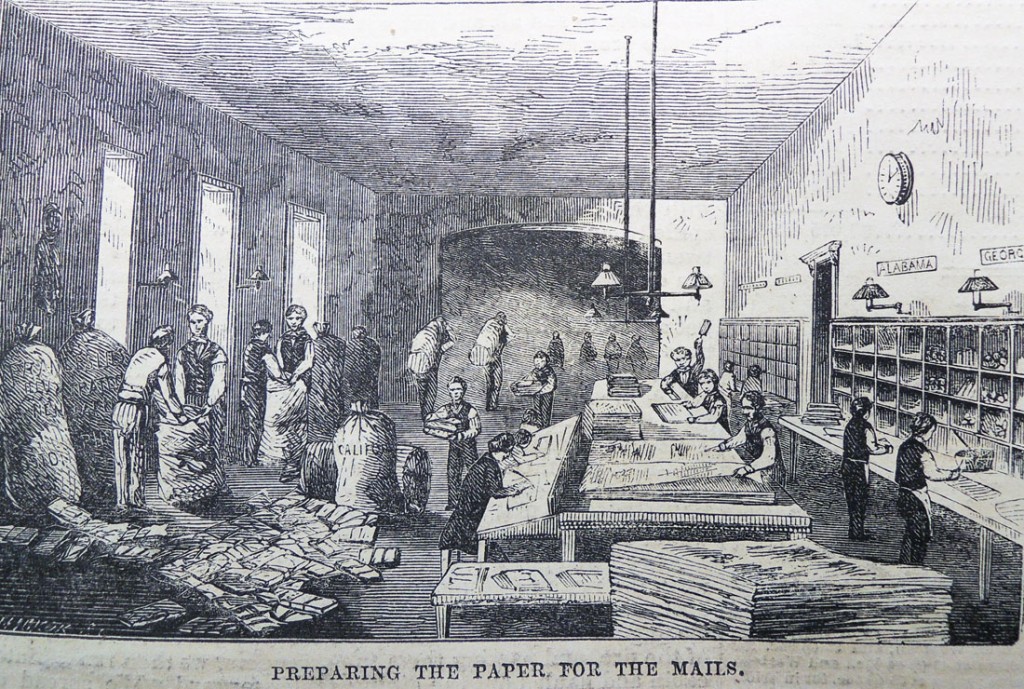