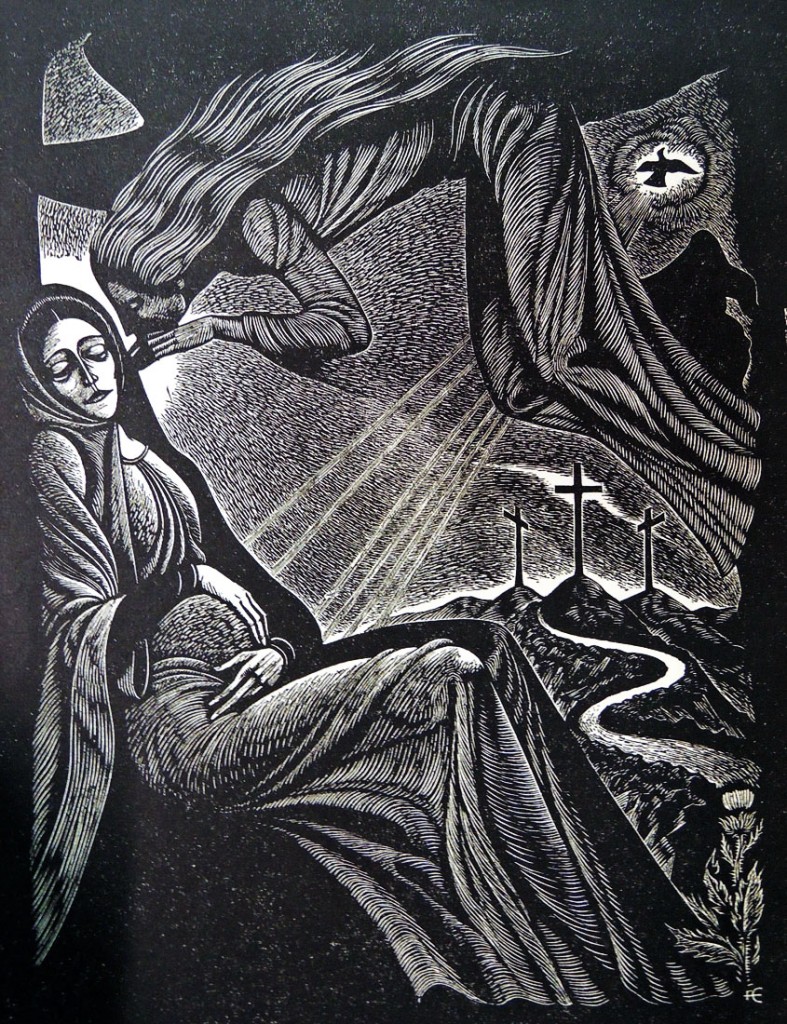 Dorothy Day (1897-1980), founder and director of the Catholic Worker, met the Quaker artist Fritz Eichenberg (1901-1990) in 1949 at a conference on religion and publishing. Day asked the artist if he would donate some images to her publication and he agreed without hesitation.

In fact, over the next thirty years, Eichenberg allowed her to use anything he had drawn or printed anytime she pleased. And she did. His most famous wood engraving “The Peaceable Kingdom” (1950) was reprinted in The Catholic Worker ten times between 1953 and 1989.

When Day wrote an autobiography, The Long Loneliness, she asked Eichenberg to provide the illustrations. The wood engravings posted here serve as frontispieces to each of the book’s three sections.

In his oral history for the Archives of American Art, recorded between May 14 and December 7, 1979, Eichenberg spoke about his friend:

“Dorothy Day was, from a personal point of view, perhaps the most important influence in my life. But, let’s say from an artistic point of view or from the point of view of an illustrator, she was not of any great influence. Because what I did for her was more or less addressed, as she often said, to those people who could not read—to the illiterate. She said she had seen clippings of my work in the hovels of coal miners and so on, people in all parts of the world; people who could not read the Catholic Worker but they understood my very simple images of saints and portraits of people important in the Catholic Worker movement.”

“I met her at a conference on religious publishing in Pendle Hill which is a Quaker study center in Pennsylvania, near Philadelphia – Wallingford. . . . That was around 1940, I would say. I was sitting next to her and I just fell in love with her as a person. She’s really great. She makes you feel at ease and I could talk to her like to an old friend. In the course of the round table there, we talked about the Catholic Worker – publishing, you know. She knew I had illustrated books and she said, “You know, I have trouble finding Catholic artists to work for me because we have no money.” That didn’t sound so good to me! She should find a lot of artists to work for her but she can’t. So she said, “Would you work for me?” And I said immediately, “Yes.” And so the next week she called me up and we got together. I gave talks there very often.”

Part Three: Love is the Measure

“And I told Dorothy from the very beginning, whenever she wants the use of my work, she can use [it]. She doesn’t even have to ask me. But she does ask me. And now . . . with copyright you have to be a little more careful. I just threw my bread upon the water and see it coming back to me somehow in the form of real satisfaction that my work touched people. Sometimes she asked me to illustrate a certain event that happened in the life of the Catholic Worker.”