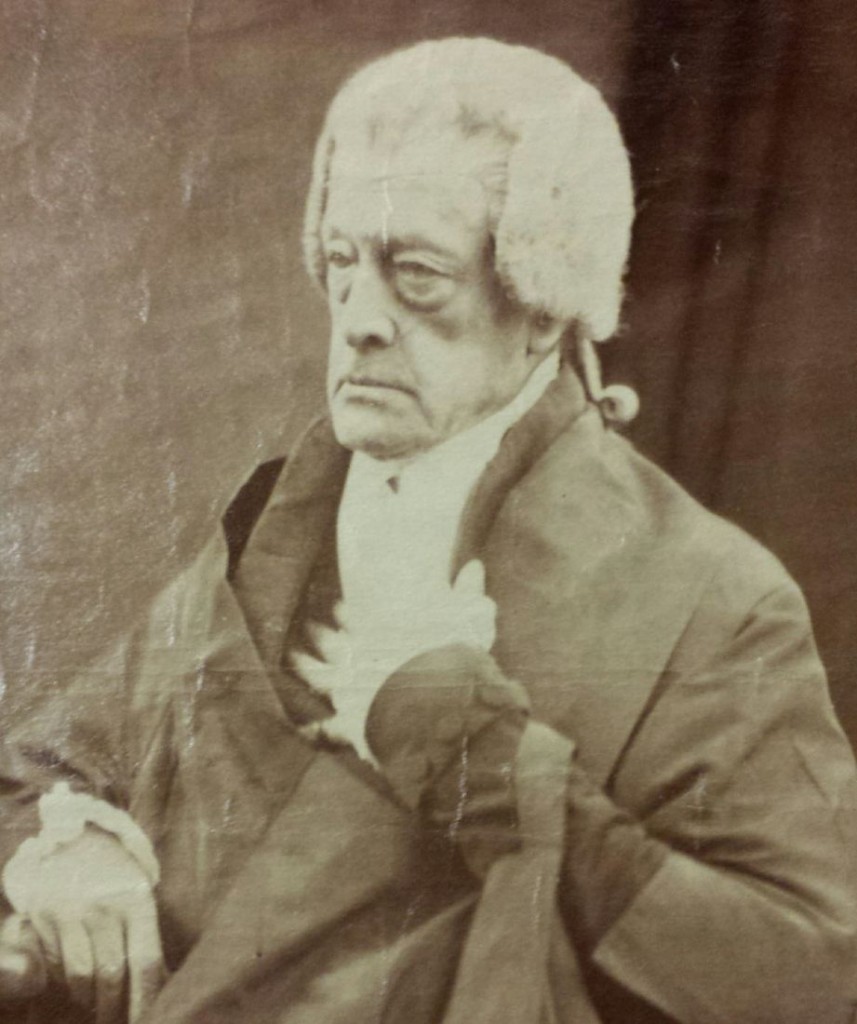 While showing the scrapbook of early photography collected by Richard Willats today, the class noticed a loose photograph slipped into the very back of the album. The albumen silver print is a studio portrait of the Lord Chief Baron Frederick Pollock (1783-1870). Although it is not dated, we know that Pollock was an active member of the London Photographical Society and would have been interested in the new albumen process, which was invented around 1850. Compare it to the two formal portrait paintings done around the same time. 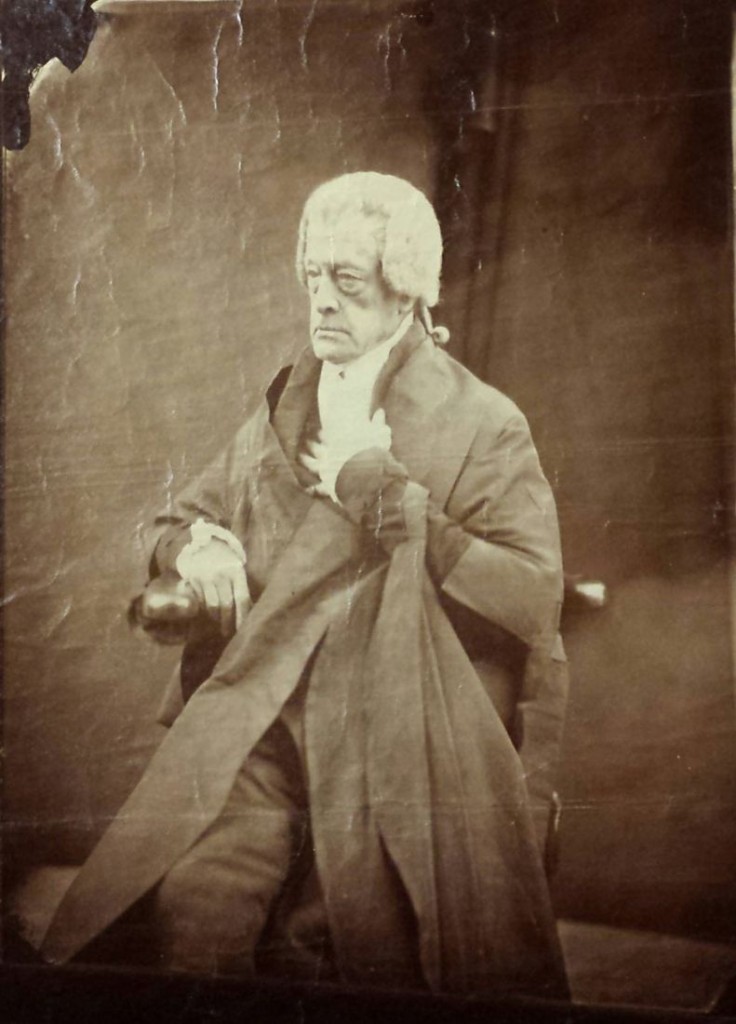 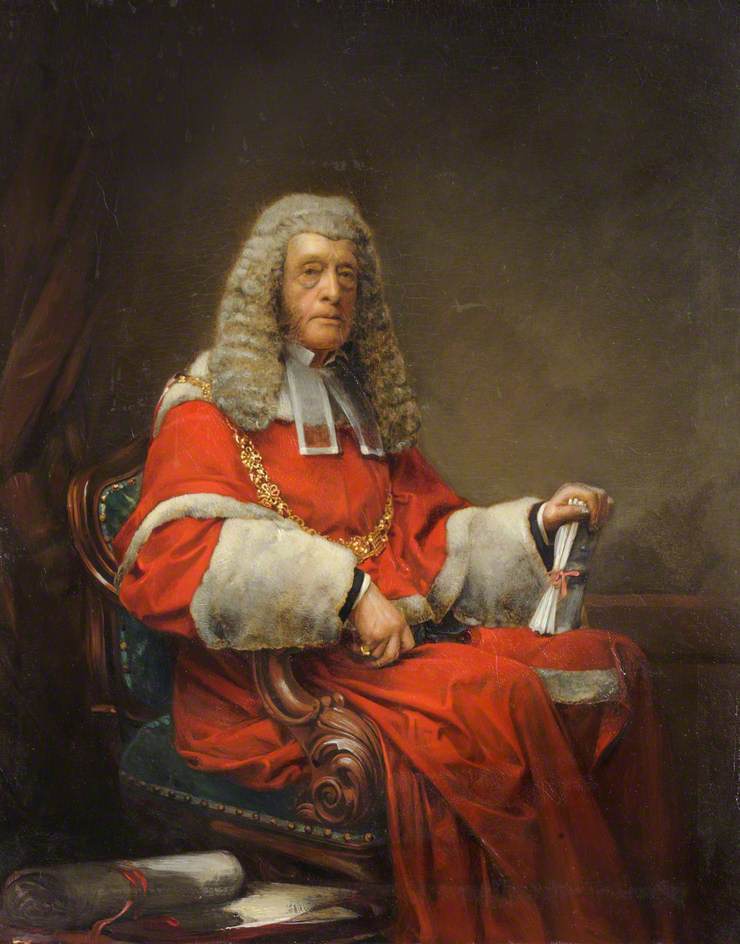 According to the Oxford DNB, Sir (Jonathan) Frederick Pollock, first baronet (1783–1870) “attended, and quitted in dissatisfaction, three suburban schools before entering St Paul’s School in January 1800. At Trinity College, Cambridge, which he entered in 1802, he obtained a scholarship in 1804, but was nevertheless so poor that, but for the help of his tutor George Frederick Tavel, the ‘unlucky Tavel’ of Byron’s ‘Hints from Horace’, he would have left the university without a degree.”

“…Pollock entered the Middle Temple on 5 October 1802 and was called to the bar on 27 November 1807. Uniting a retentive memory, great natural acumen, and tact in the management of juries with a profound knowledge of the common law, Pollock rapidly acquired an extensive practice both at Westminster and on the northern circuit, which he went regularly from 1816, contending with Brougham and Scarlett.” 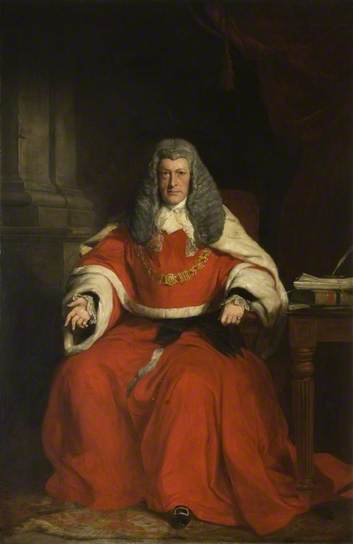 “…In 1830 Pollock declined a judgeship in the common pleas and turned his attention to politics. . . He was knighted on 29 December 1834 on accepting the office of attorney-general in Sir Robert Peel’s first administration, which terminated on 9 April 1835. . . But his aspirations were judicial, not political, and he readily agreed to become lord chief baron of the exchequer in succession to Lord Abinger on 15 April 1844; he was made a serjeant on 18 April.”

“…On his retirement on 12 July 1866 Pollock received a baronetcy on 24 July. In the then rural surroundings of Hatton, Middlesex, he resumed the studies of his youth. To the Royal Society, of which he was elected a fellow in 1816, he communicated three mathematical papers, the last on the theory of numbers and Fermat’s theorem. He was also FSA and FGS and a keen member of the council of the London Photographical Society.”

To view the entire Willats album, use the permanent link: http://arks.princeton.edu/ark:/88435/k930bx11x