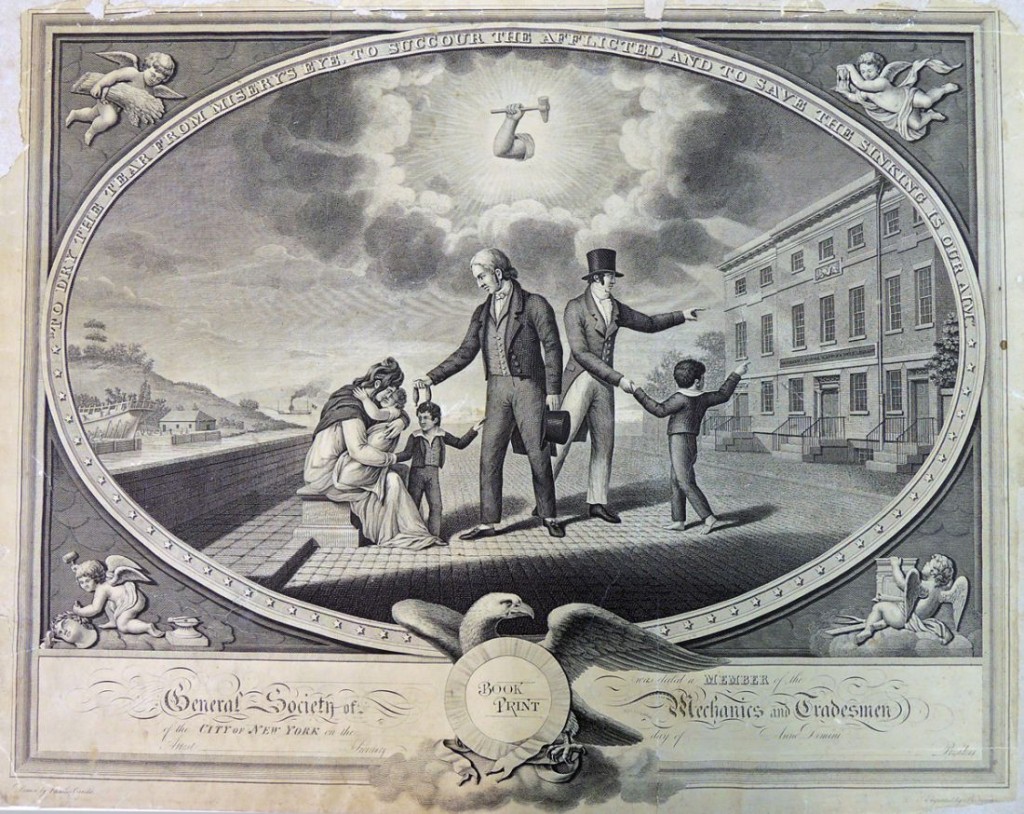 According to the Mechanics Society literature, “Mechanics Institutes were educational establishments formed to provide adult education, particularly in technical subjects, to working men and, later, women. The General Society of Mechanics & Tradesmen of the City of New York was founded in 1785 by the skilled craftsmen of the City.”

In 1820, the General Society opened one of New York City’s first free schools as well as the Apprentices’ Library and in 1858, elected to convert its school into a Mechanics Institute that would “provide training to those citizens whose work obligations prevented their pursuit of a formal technical education.” 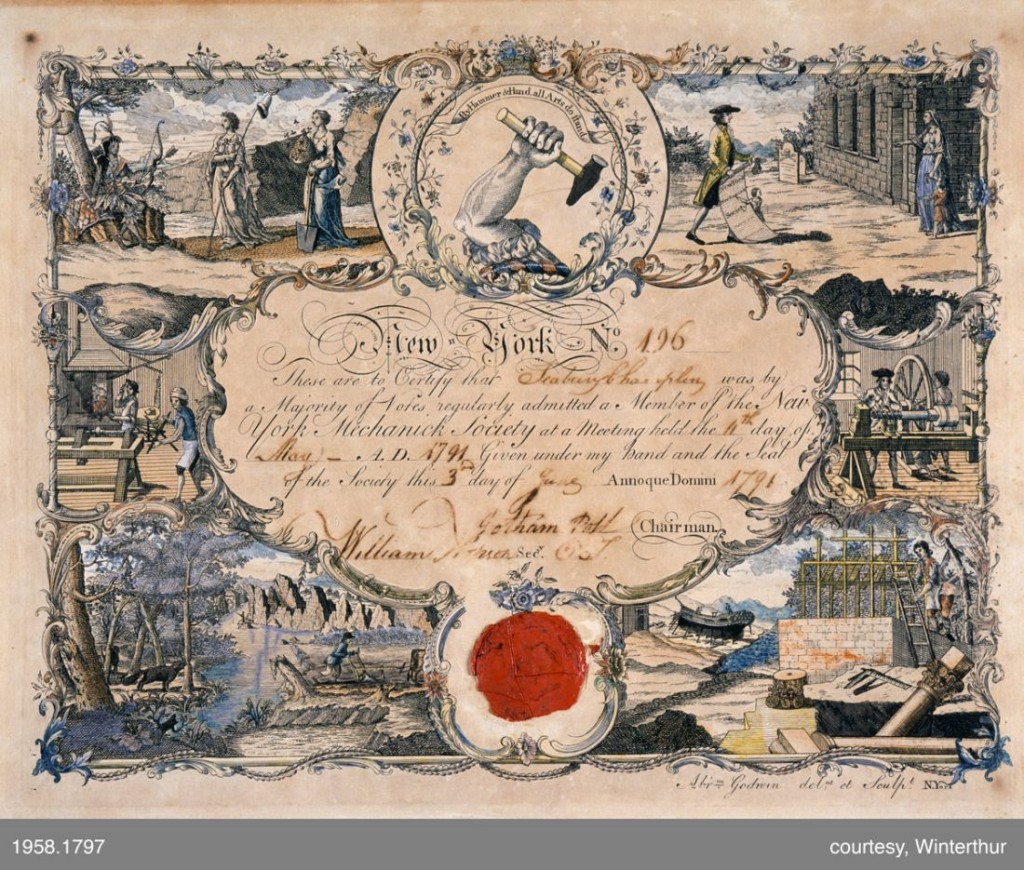 The first certificate of the Society was issued to William Wright in July, 1790. The 9 x 11 1/2 inch sheets were designed, engraved, and printed by Abraham Goodwin (1763-1835) in 1786 and each one filled in by hand with a large, wax seal at the bottom (certificate no. 196, seen above, is held in the collection of the Winterthur Museum).

From that time forward, the Society budgeted funds for the printing of member certificates. “Be it further ordained, That there shall be a plate engraved for the purpose of striking off the certificates of admission; that each member shall be entitled to a certificate, which shall be presented to him by the Secretary, dated from the commencement of his membership, free from any cost or expense, at any time not exceeding two months from the time he was initiated.”–Annals of the General Society of Mechanics and Tradesmen of the City of New York (1882).

Historians disagree as to the date that Charles Canda was engaged to redesign a nineteenth century certificate, engraved by the noted Philadelphia studio of Benjamin Tanner, but it was some time after 1820. This version prominently featured the Society’s motto: To dry the tear from misery’s eye. To succour the afflicted and to save the sinking is our aim. 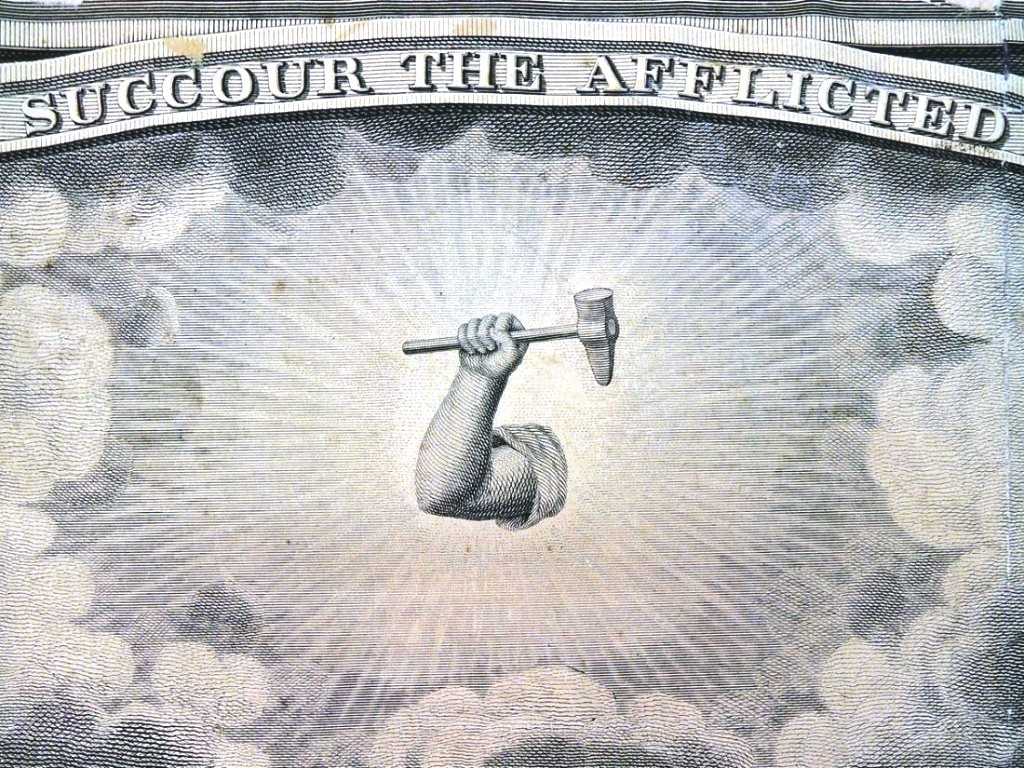 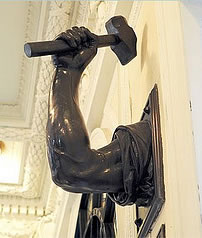 The façade of the Mechanics Bank of New York, opened in 1810 at nos. 31 and 33 Nassau Street, featured a bronze casting of a mechanic’s brawny arm and hand wielding a hammer.