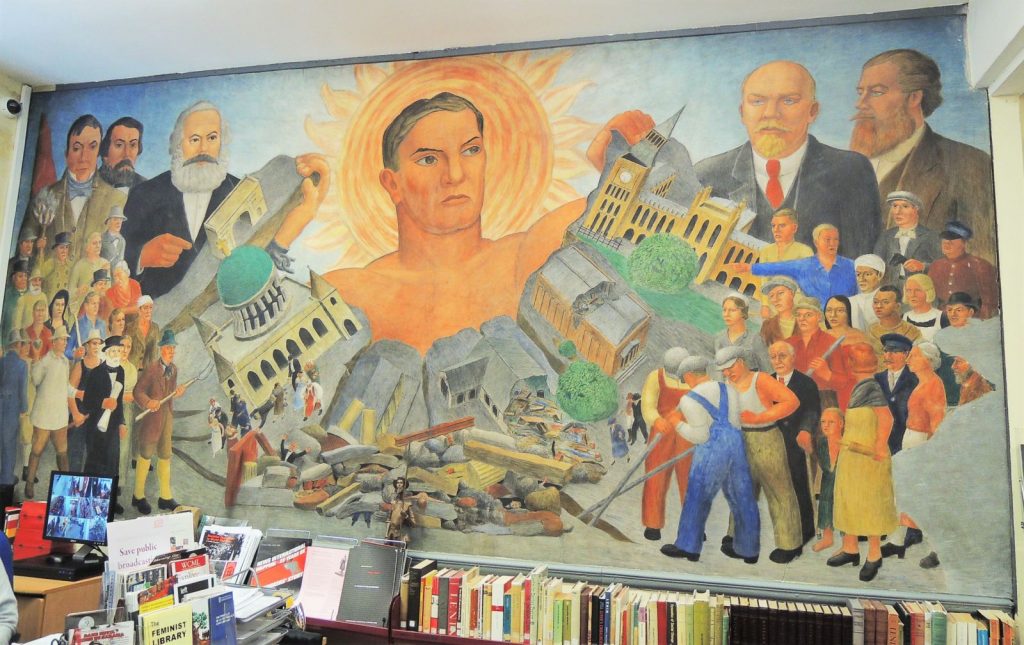 In 1934 Viscount Hastings, who studied under Diego Rivera, executed a large fresco for the Marx Memorial Library’s first-floor reading room. A number of influential figures within the history of British labor are depicted in this painting, entitled The Worker of the Future Clearing Away the Chaos of Capitalism.

Here are a few more of the many graphic arts that decorate the walls of the library, along with a little of their history. 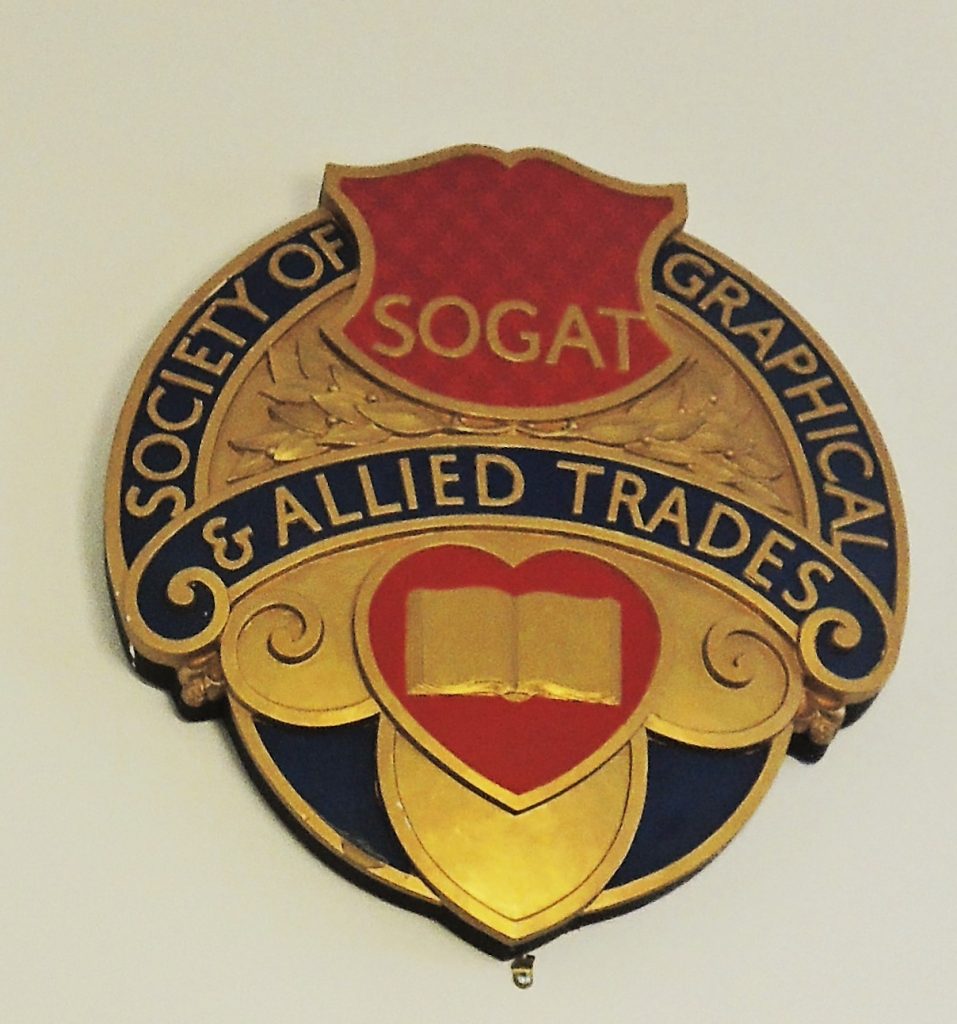 A Welsh Charity school was built on the site of Marx House in 1738. It educated boys and later a few girls, the children of Welsh artisans living in poverty in Clerkenwell. Gradually the intake became too large and the school moved to new premises in 1772. After this the building was divided into separate workshops one of which became the home to the London Patriotic Society from 1872 until 1892. 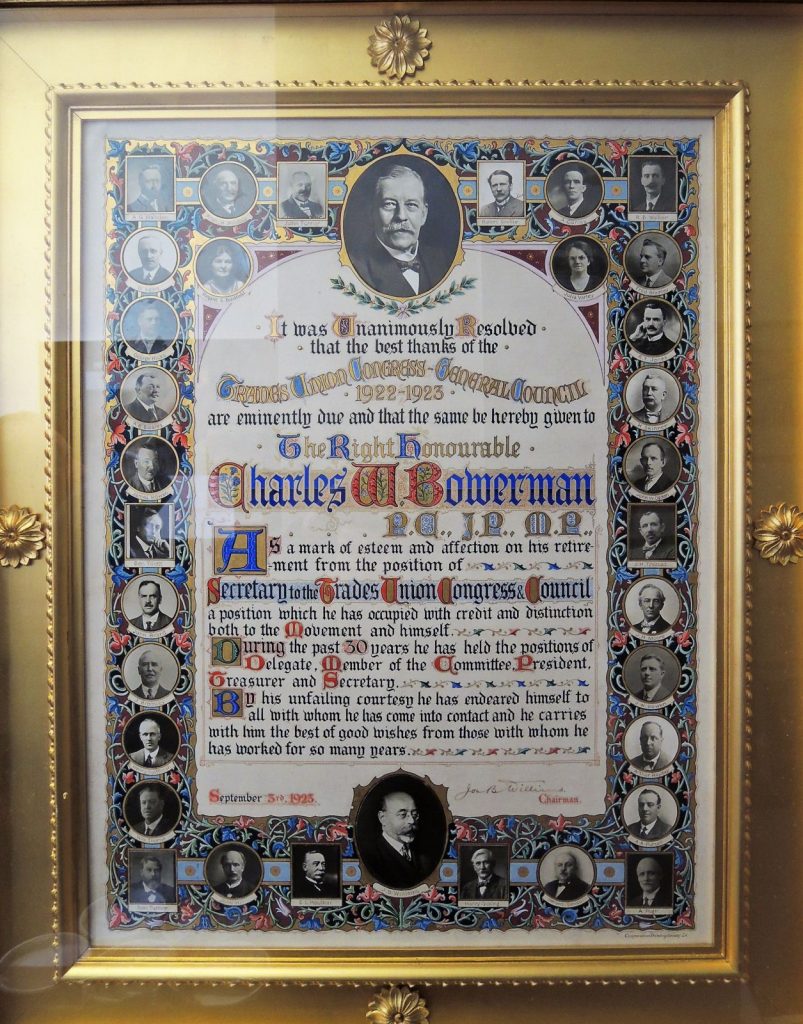 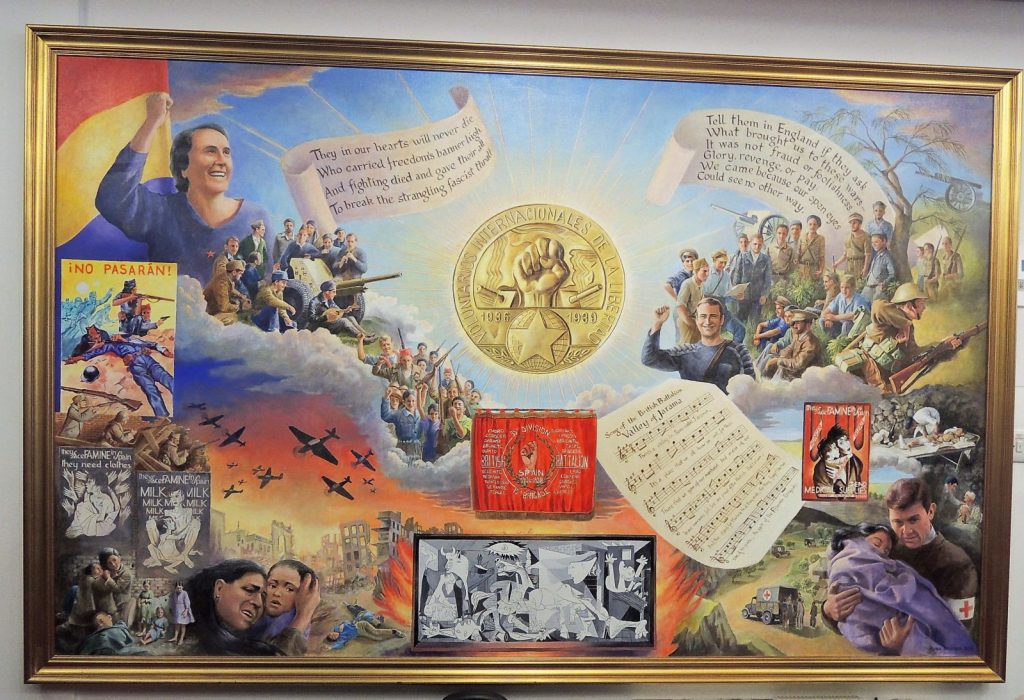 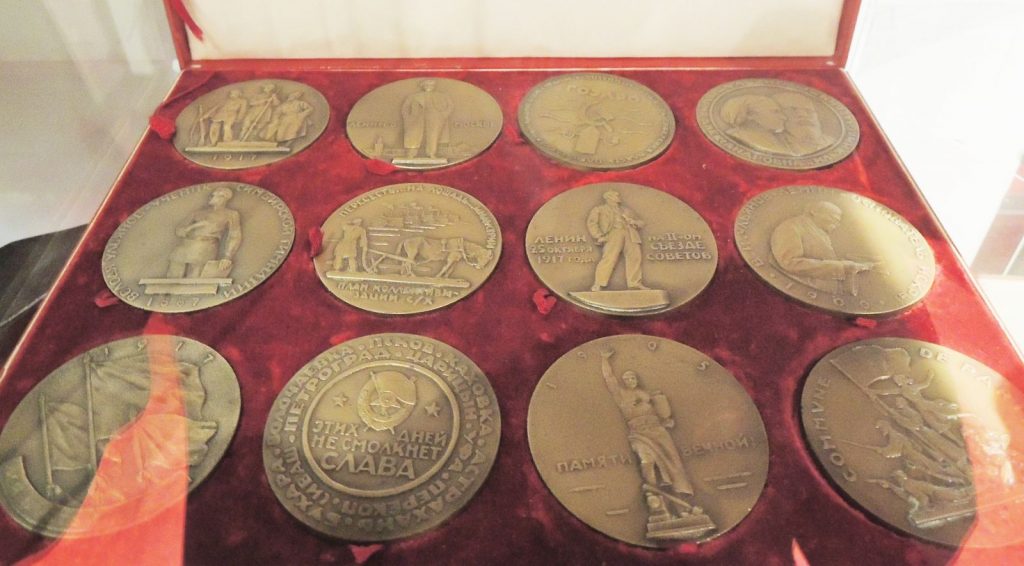 Lenin was exiled in London and worked in the building from April 1902 to May 1903. During this period he shared the office of Harry Quelch, the director of the Twentieth Century Press, from there he edited and printed the journal ISKRA (The Spark), which was smuggled into Russia. The office is still preserved and open to visitors. 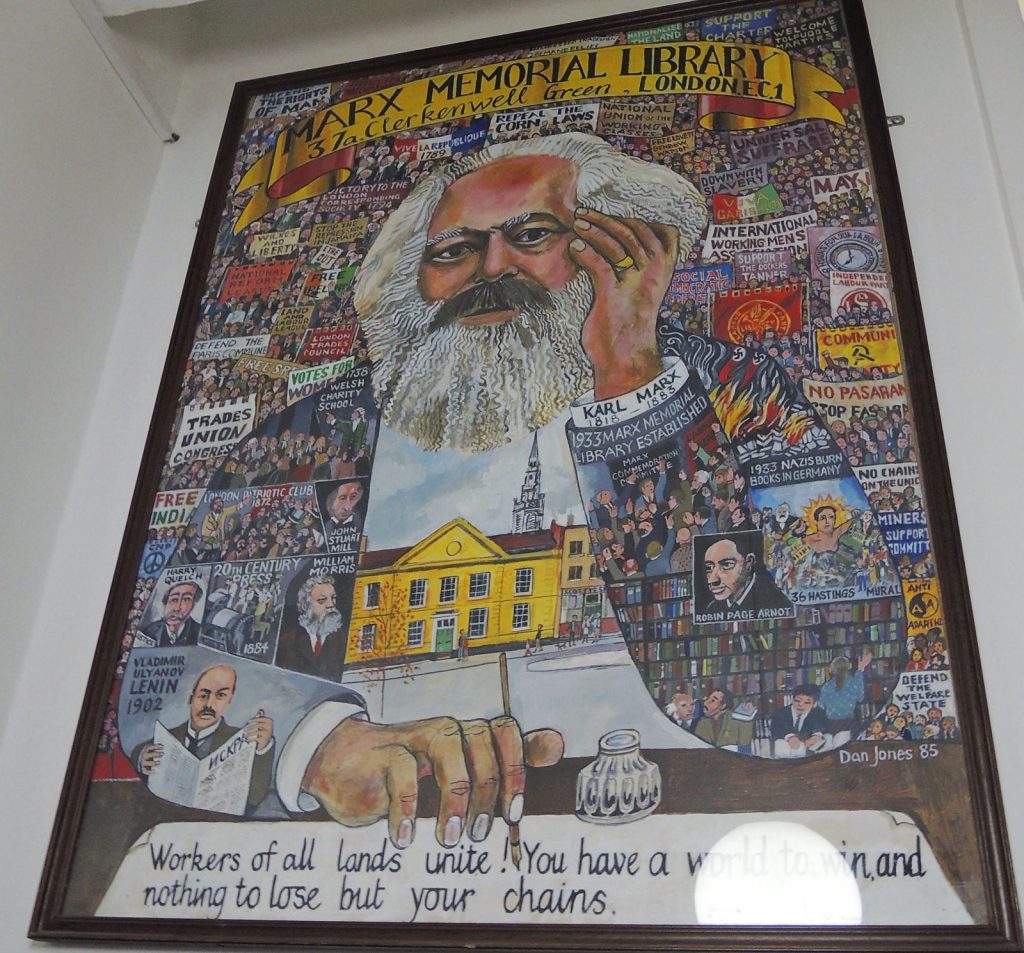 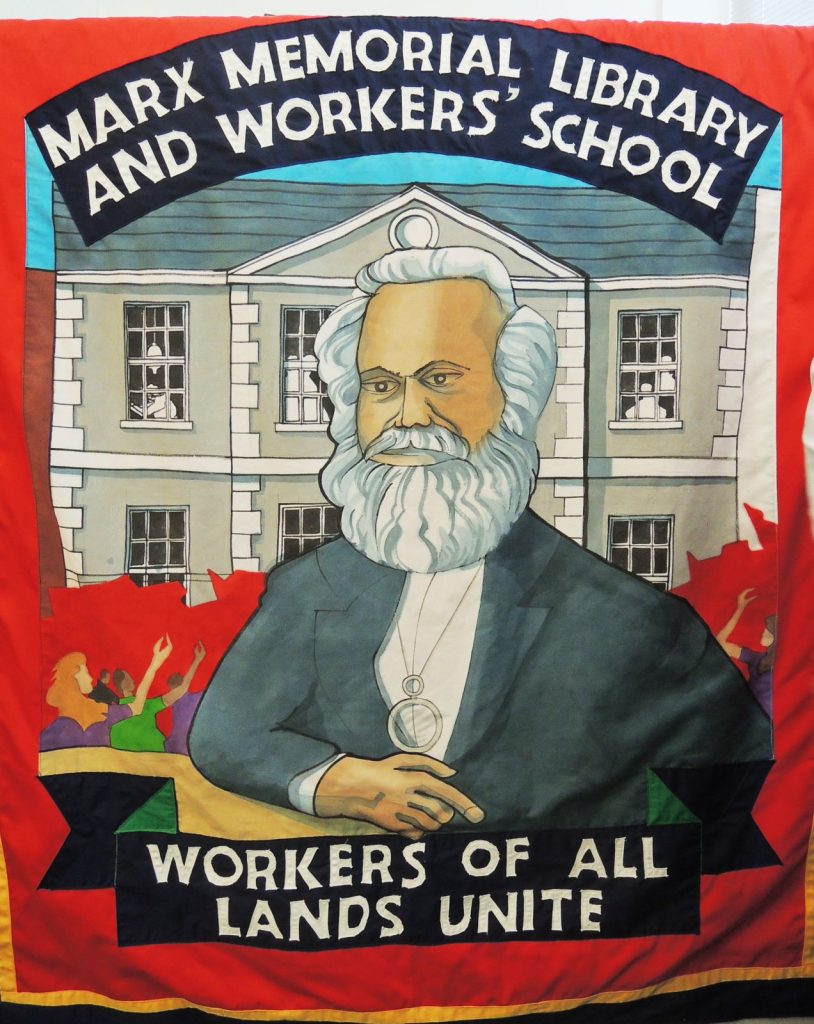 In 1933, the fiftieth anniversary of the death of Karl Marx, a delegate meeting comprising trade unionists, veteran socialists belonging to the Labour Party and Communist Party, and representatives of the Labour Research Department and Martin Lawrence Publishers Ltd., considered setting up a Permanent memorial to him. That year also saw the Nazis in Germany burning books. In these circumstances the meeting resolved that the most appropriate memorial would be a Library. Thus the Marx Memorial Library and Workers School (as it was then known) was established at 37a Clerkenwell Green that year. Study classes, held in the evenings, became the distinguishing feature of the Workers’ School, which was divided into faculties of science, history and political economy. 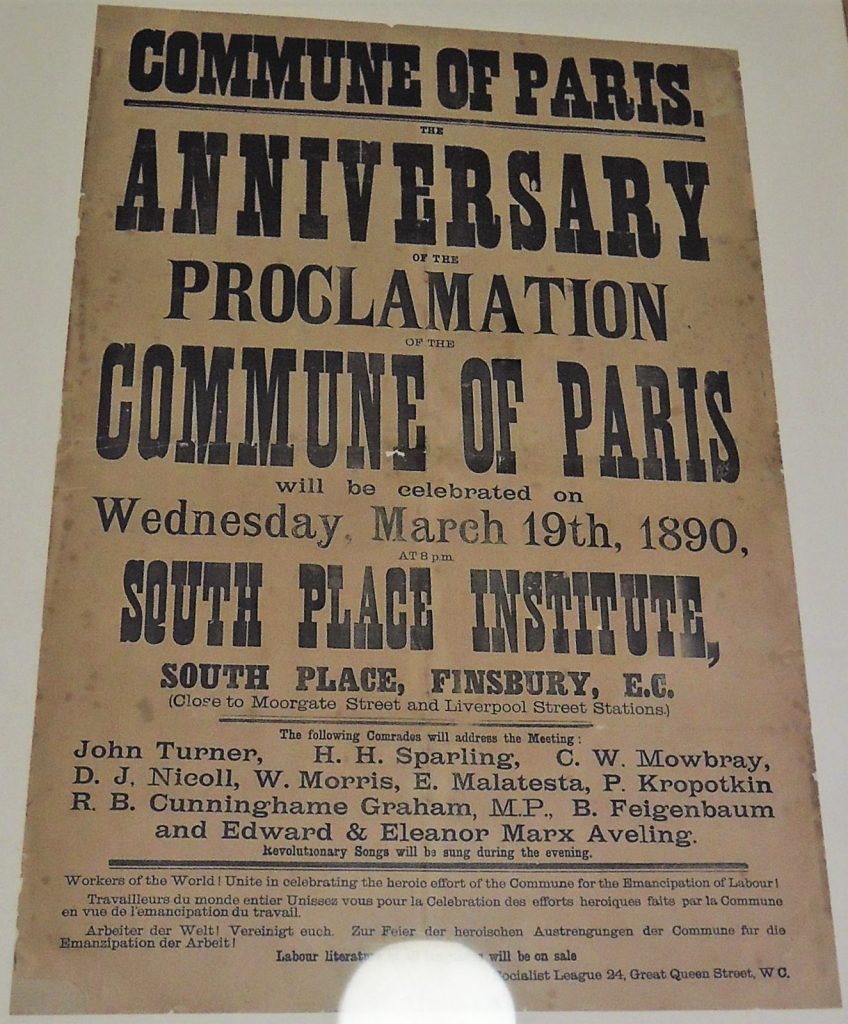 Note that William Morris was one of the comrades present at this 1890 meeting.