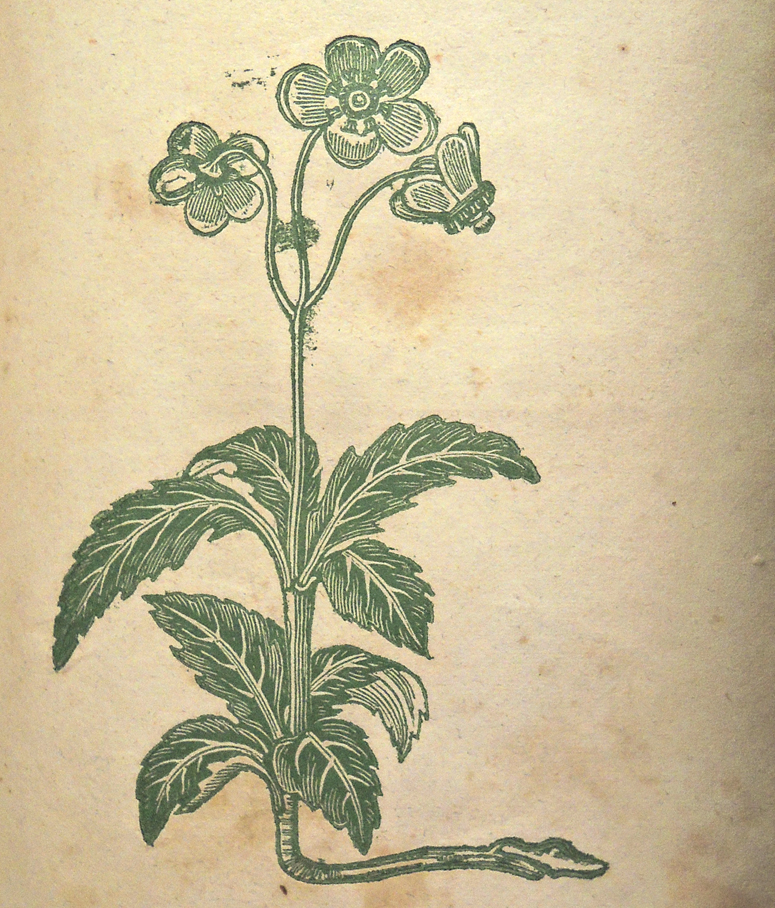 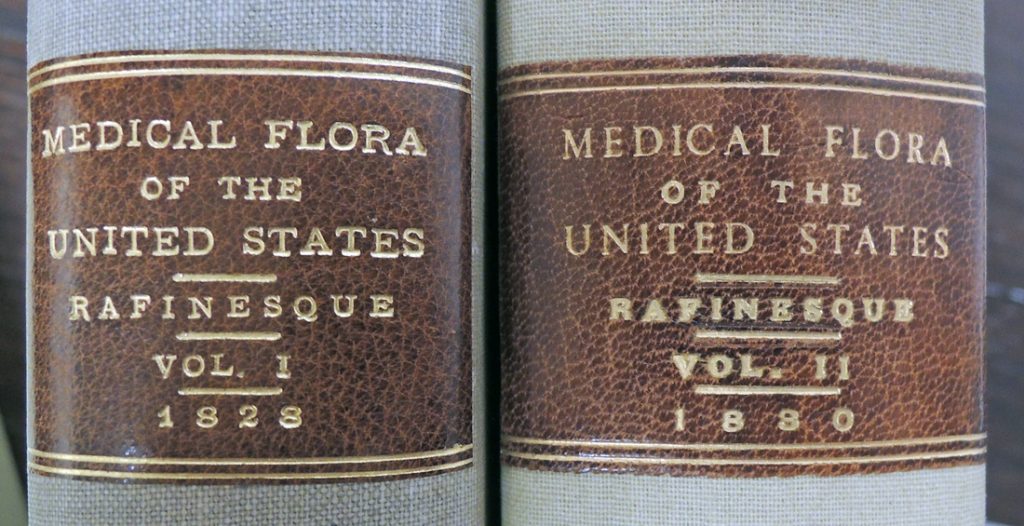 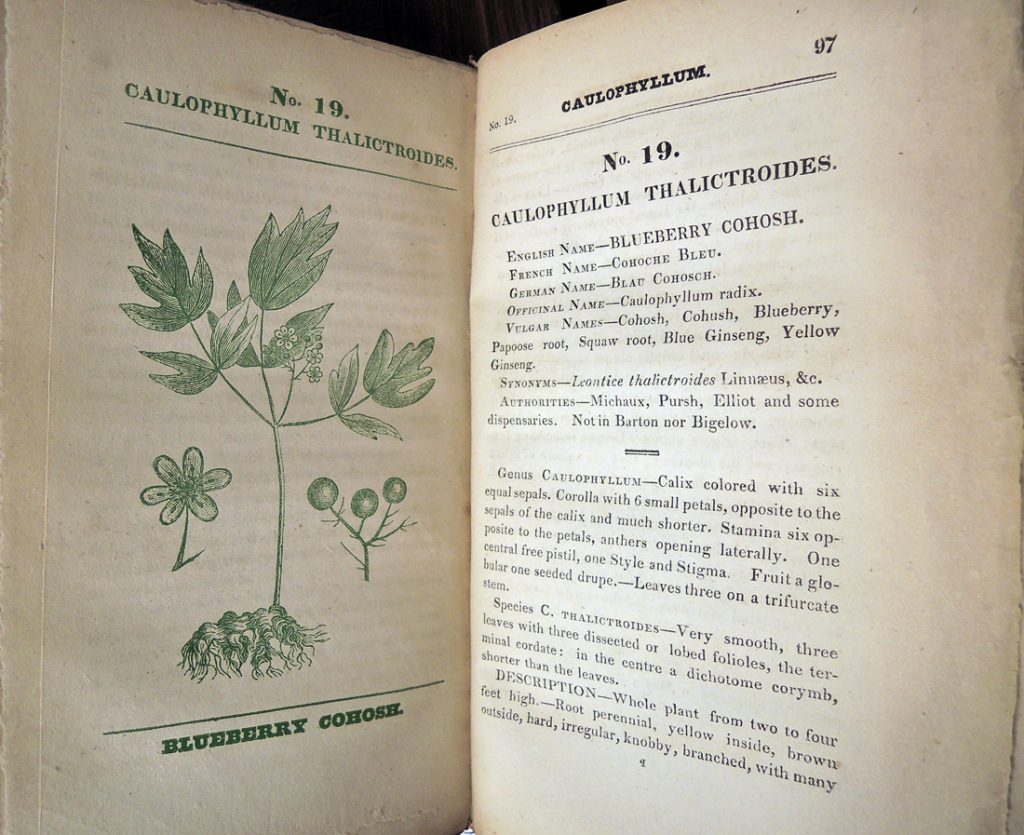 Constantine Samuel Rafinesque was a botanist and professor. Originally born in Turkey, he came to Philadelphia in 1802. He met Thomas Jefferson in July 1804 while traveling through Maryland, Virginia and the District of Columbia to study the local flora. Although this was their only meeting, they corresponded sporadically for the next twenty years. During their first bout of correspondence, Rafinesque expressed keen interest in the Lewis and Clark Expedition. Jefferson suggested that he might prove useful in a proposed expedition along the Red River. Rafinesque did not join this expedition, having left the country for Italy before receiving the letter. He remained there for the next ten years.

Rafinesque returned to the U.S. in 1815, and accepted a position as a botany professor at Transylvania University in 1819. Rafinesque wrote to Jefferson after a silence of nearly fifteen years to inquire after a professorship at the University of Virginia. Jefferson promised to “lay [his] letter before the board in due time.” Rafinesque was ultimately unsuccessful in securing a position at the new university, despite applying to Jefferson several more times over the next few years.Rafinesque remained at Transylvania University and did extensive archaeological and linguistic work on the early people in the Ohio Valley. In 1826, he moved to Philadelphia where he continued to write until his death by cancer.” –The Thomas Jefferson Encyclopedia: https://www.monticello.org/site/house-and-gardens/rafinesque-constantine-samuel 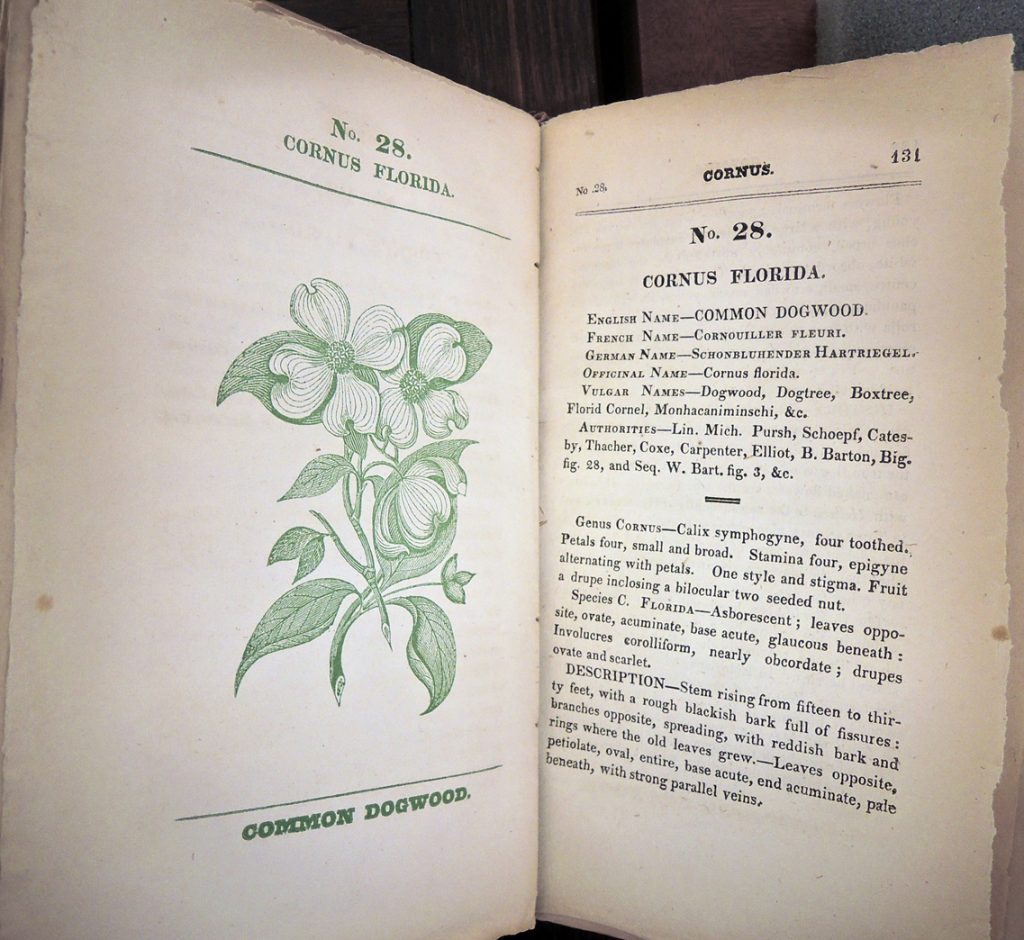 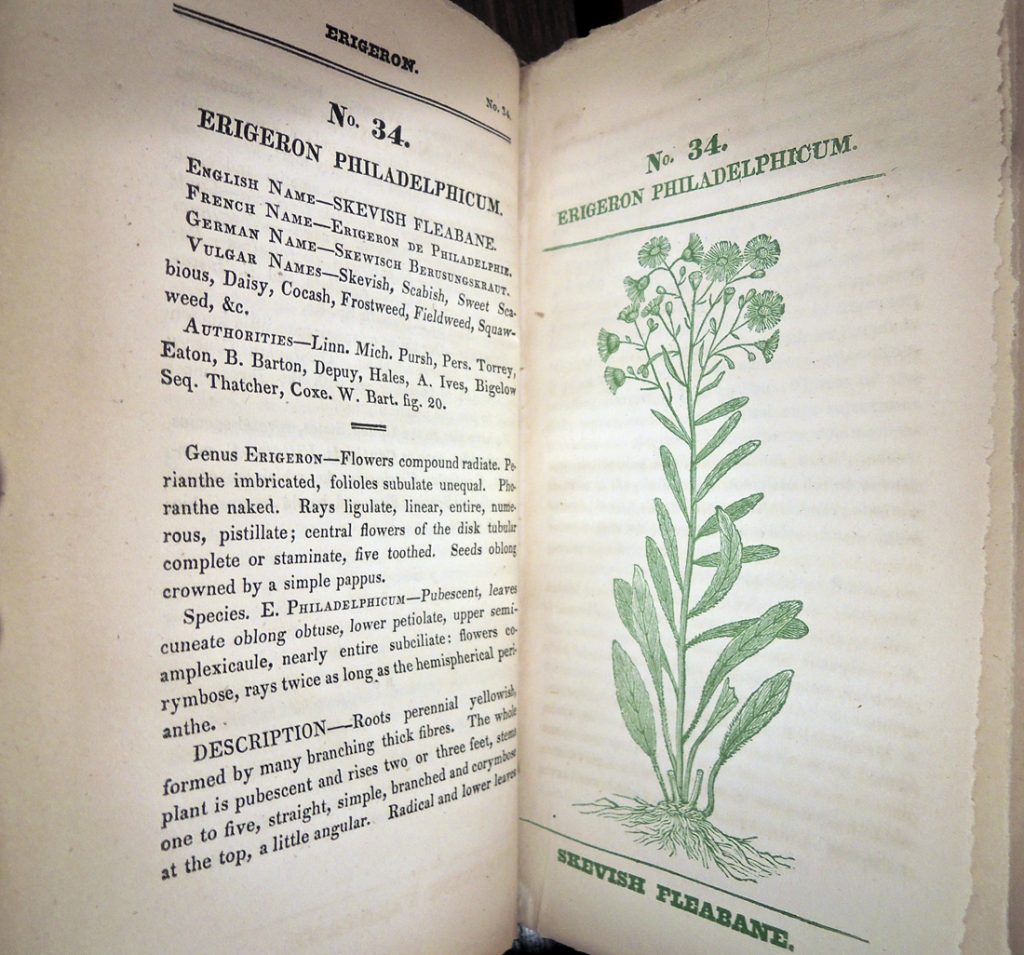 Rafinesque opens volume one with 74 main points, beginning:
1. THE Science of Botany was at all times intimately connected with medical knowledge.
2. Several ancient nations, such as the Grecians, Romans, Hindoos, Chinese, &c. considered Medical Botany as equivalent to both botanical and medical knowledge.
3. Medicine was then, and is still among rude nations, nothing more than the application of an empirical knowledge of vegetable substances.
4. Thence the usual vulgar division of Plants, into the five great Classes of ALIMENTS, SIMPLES, POISONS, FLOWERS and WEEDS, or alimentary, medical, poisonous, ornamental and useless plants.
5. At the revival of learning in Europe, this notion being general, the first works on Botany, were of course mere sketches of Medical Botany, and comments on Grecian or Roman writers.
6. When Tournefort and Linnaeus, about a century ago, became botanical reformers, and made Botany a separate Science, their efforts and improvements were resisted by those who at all times contend against useful innovations.
7. Linnaeus in his Materia Medica, gave a model of systematical Medical Botany, equally concise, perspicuous and accurate; but destitute of the help of figures. . .

He ends with 12 concluding remarks:
1. Physicians do not agree on the mode of action of the properties, nor the proximate and intricate operation of remedies; but the ultimate effects and results being ascertained, they are sufficient for practical use.
2. Drugs are Vegetable substances prepared for use, and kept for sale by Druggists or Pharmacians.
3. Those which are imported, are often adulterated, or inferior kinds are substituted; for instance Peruvian Bark or CINCHONA, and Saffron or CROCUS, are hardly to be met with in the U. S.—Caribean bark or PORTLANDIA, and Bastard Saffron or CARTHAMUS, are usually sold instead, which are very weak substitutes.
4. This arises from a want of medical inspections and officinal knowledge: the results are, that prescriptions fail, physicians are disappointed, and patients suffer.
5. To avoid in part these evils, it is desirable to employ our own genuine medical substances, whenever they afford sufficient remedies and suitable equivalents.
6. Medical substances being often impaired by age, it is desirable to obtain them fresh, or in yearly rotation.
7. Fresh and genuine substances can only be obtained at all times from medical gardens, or honest dealers.
8. The best medical gardens in the United States are those established by the Communities of SHAKERS, or modern Essenians, who cultivate or collect about one hundred and fifty kinds of medical plants.
9. They sell them cheap, fresh and genuine, in a compact and portable form. Pharmacians would do well to supply themselves with them, or to imitate their useful industry.
10. Several of our medical plants and drugs are already an object of trade to Europe and elsewhere. Many more may become in demand, when their valuable properties will be better known.
11. A new branch of trade may thus be opened, which it is our duty to encourage, by collecting and cultivating our medical plants.
12. Herbalists and Collectors are often ignorant and deceitful. The best way to prevent their frauds and correct their blunders is, by enlightening them, adopting botanical names, and refusing spurious drugs. 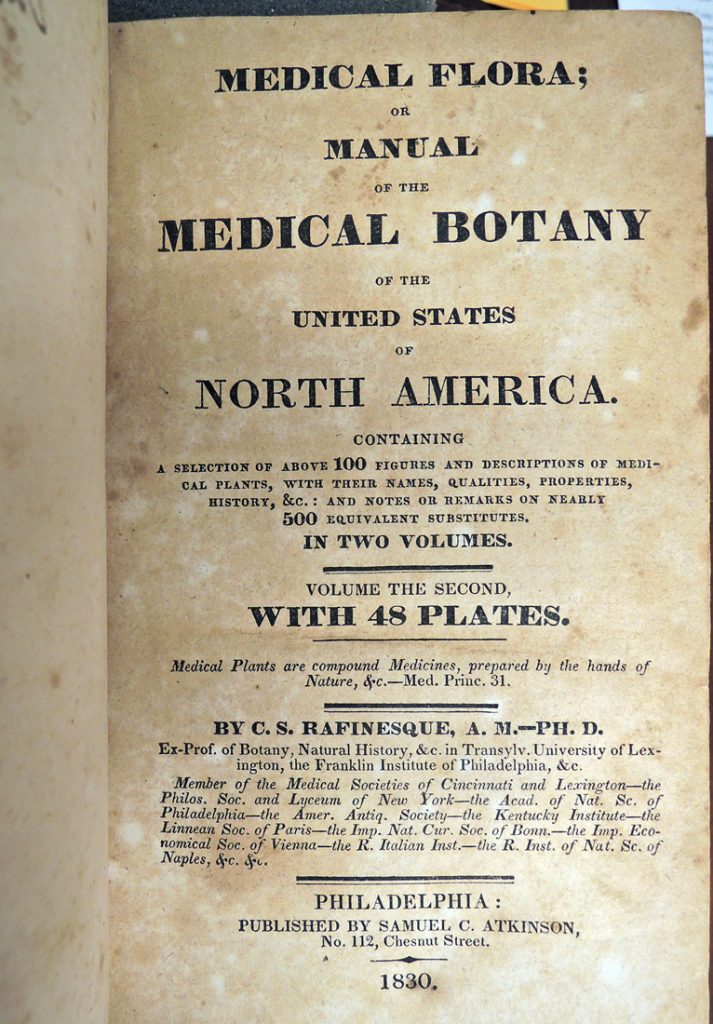