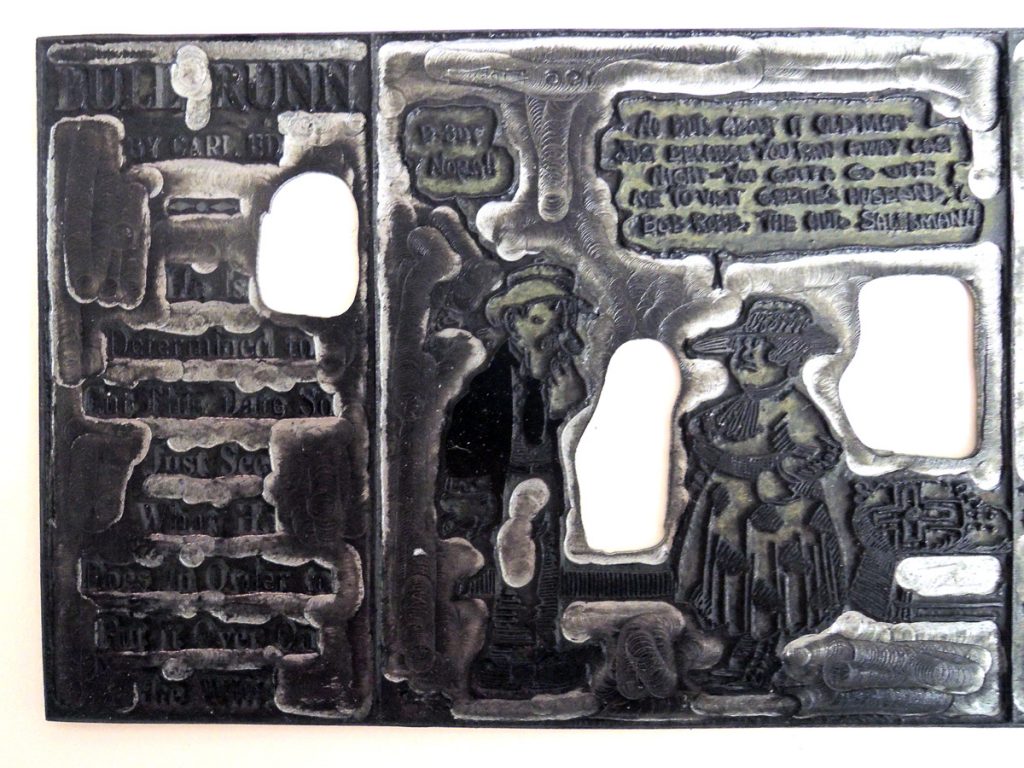 Printing plate, horizontally reversed, for Bull Runn by Carl Ed. “He is Determined to Cut This Date So Just See What He Does In Order to Put it Over On The Wife!” In this five cell strip, Bull’s wife insists that they go together to visit Gertie’s husband, Bob Robb, the auto salesman. Bull breaks a jewelry store window and gets taken to jail to get out of it. Then, when his wife is not looking, he reimburses the store owner. 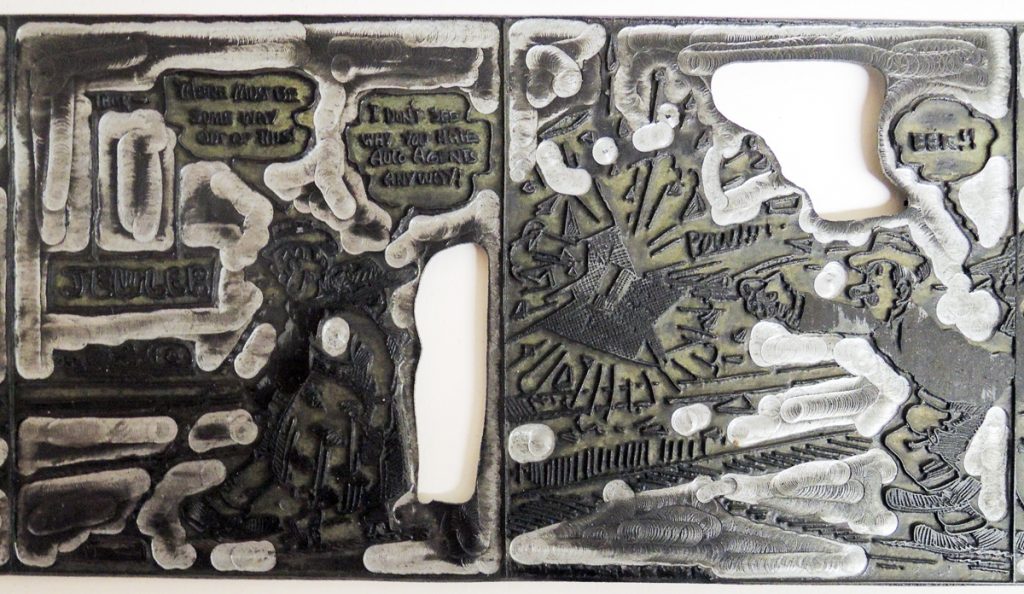 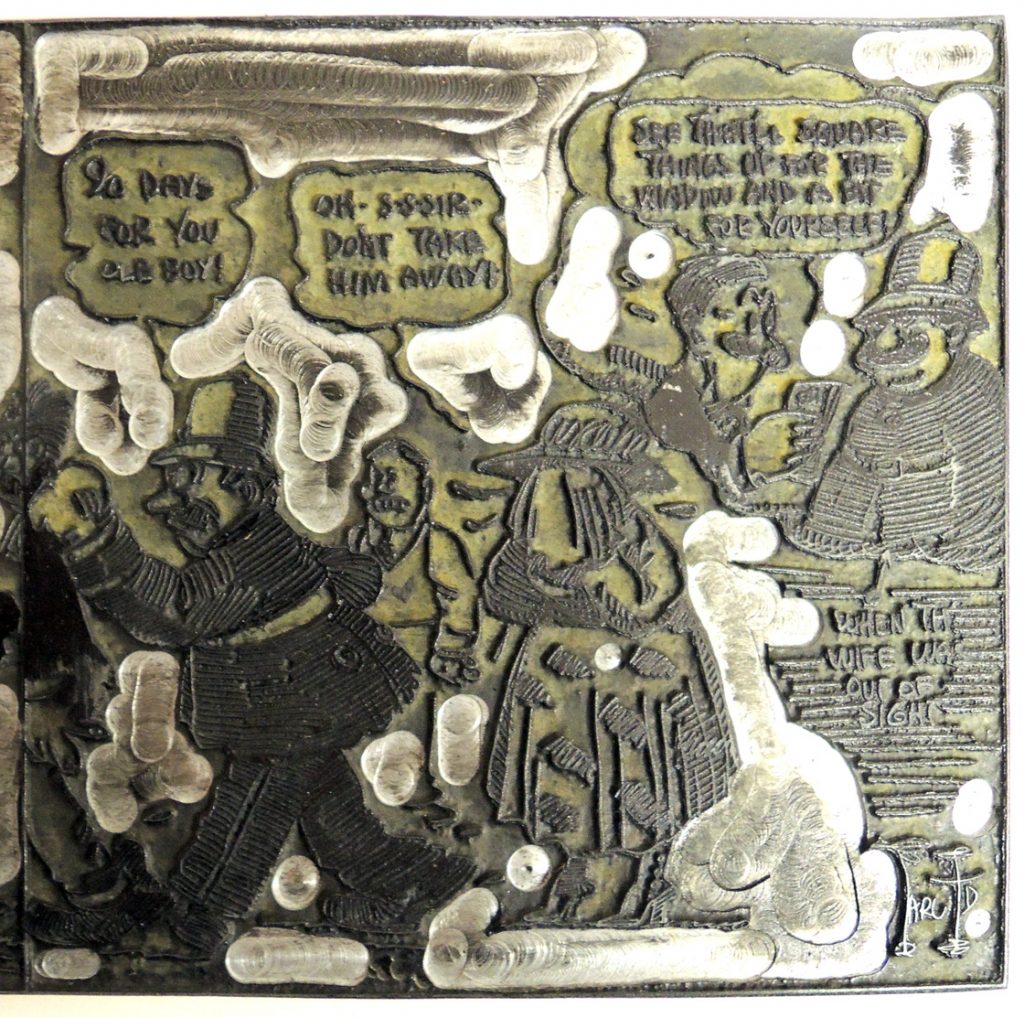 Cartoonist Carl Ed’s obituary ran in The New York Times on October 11, 1959: “Carl Frank Ludwig Ed, creator of the Harold Teen comic strip, died today a short time after he had been admitted to Evanston (Ill) hospital. He was 69 years old. Mr. Ed, who pronounced his name to rhyme with Swede and was often called Swede as a nickname, had been in ill health …”

“In 1910 he became a sports writer for the Rock Island Argus and seven years later he took his first job as a cartoonist in The Chicago American sports department. The next year Mr. Ed began a seven-year tenure with the World color syndicate of St. Louis, drawing the well-known strip Luke McGluke, the Bush League Bearcat, and later Big Ben. By 1918 his talents came to the attention of the late Joseph Medill Patterson, co-publisher of The Chicago Tribune, who hired him.”

Nowhere, in the Times or other sources, is the comic strip called Bull Runn mentioned although it must have circulated to dozens of papers. The Graphic Arts Collection holds 100 lead and zinc printing plates for the strip, given by Charles Rose, Class of 1950, P77, P80. The plates originated with Abraham Meyers, whose American Melody Company or Meyers List syndicated cartoons and features to American newspapers from 1898 to 1977. 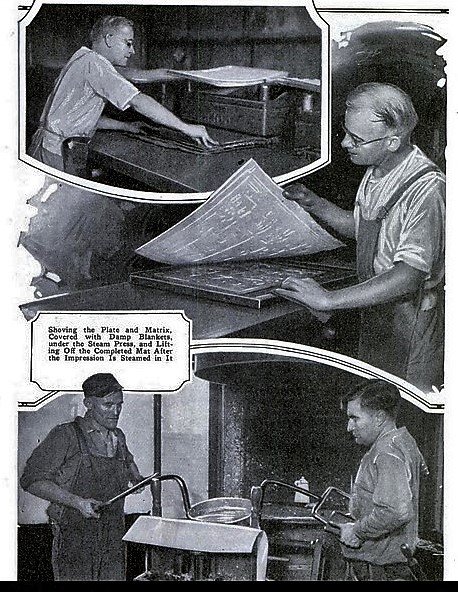 In 1926, Popular Mechanics ran a story detailing the process in which comic strips, such as Bull Runn, were printed in American newspapers.

“The story of the distribution, or syndicating of the features which appear simultaneously in papers throughout the country is a story of big business organization. . . . From the artist, the strip or page goes to the engraving department, is photographed on a copper plate, engraved, and prepared for the mechanical department. The next step is to transfer the engraving to a paper mold in which type metal is poured to produce the printing plate.”

A machine carrying rolls of blotting paper and other rolls of a special tissue paper automatically cuts off sheets somewhat larger than a newspaper page, pastes them together . . . sends the completed ‘mat’ or matrix through rollers which press out the excess paste and bind the parts firmly together and finally delivers the completed sheet to the drier.”

“. . . the dampened matrix is placed over the engraved plate, rolled in until it fills every indentation then covered with moistened blankets and placed in a steam heated press to dry the impression in place. . . . The cartoonist delivers a full week’s supply of strips at one time, and all are reproduced on one matrix, which is then clipped apart for convenience in mailing.

“At the newspaper plant the process is reversed. The mat is placed in a casting box, surrounded by containing walls just type-high and molten type metal poured in. The casting boxes are water-cooled and the hot metal chills so quickly that the tissue surface of the mat is hardly browned. The casting after being sawed to the proper size, is placed in the page form and made up along with the newspaper type.”–“How Cartoons are Syndicated,” Popular Mechanics, 45, no. 3 (March 1926): 451-55. 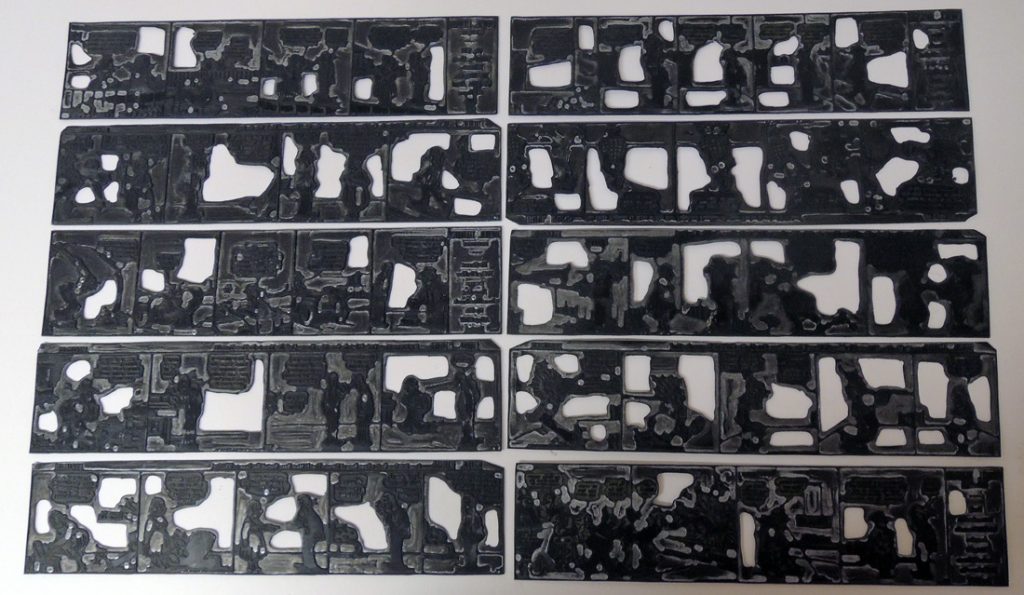