The anonymous author of this small book [King of the Demons] states his purpose on the title page:

I prophesy on each man’s skull
The heavy, thick, the dark, or dull;
O’ver politics supreme I reign,
Explore the labyrinths of the brain:–
To show how little, great men are
Is Asmodeus constant care! 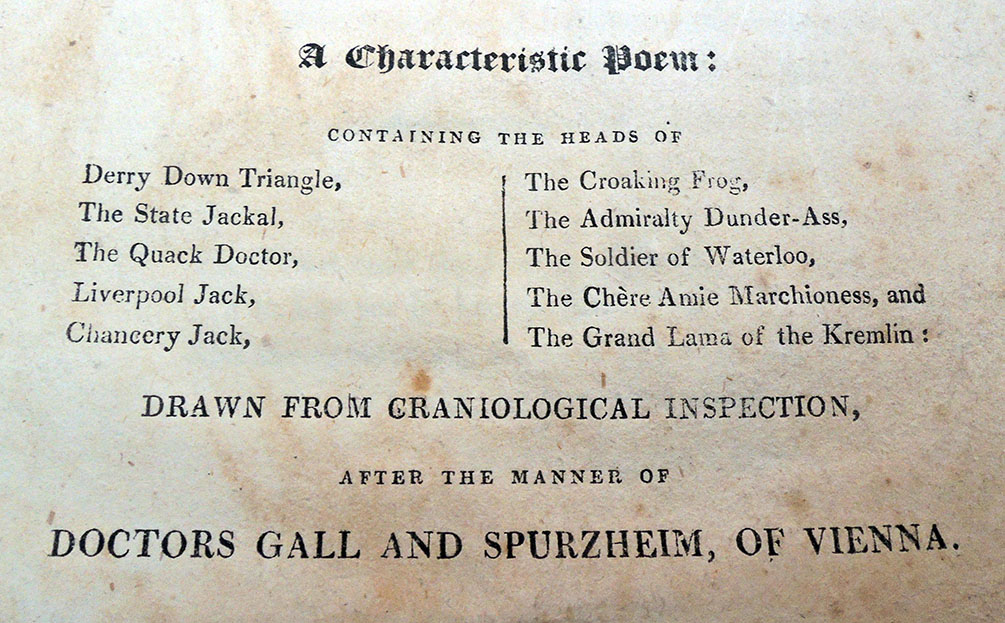 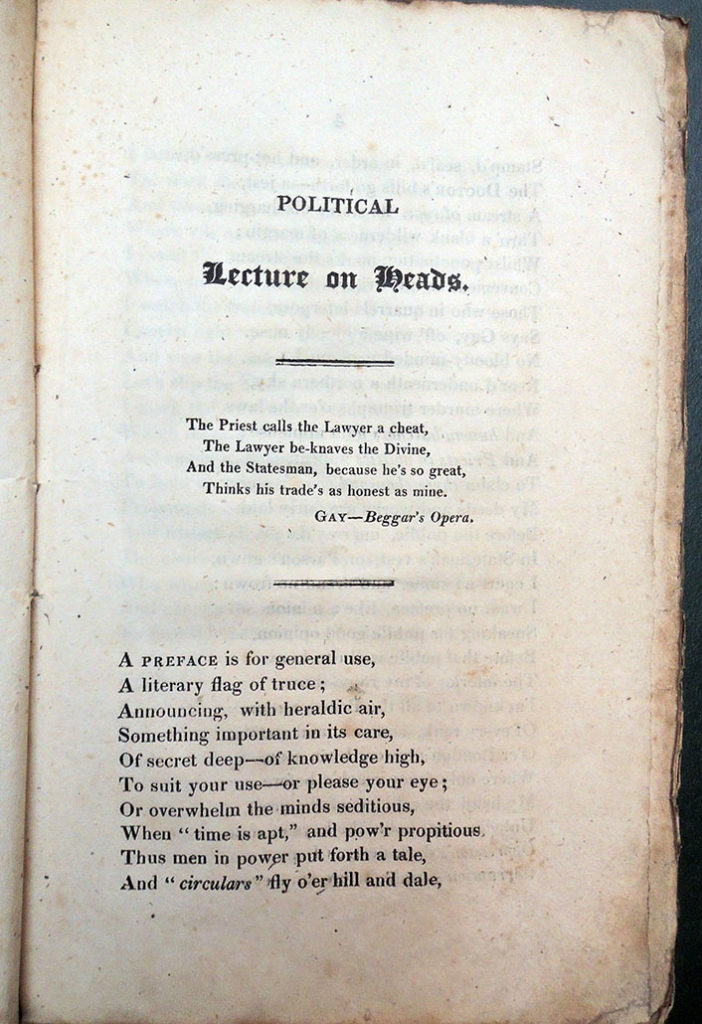 Through all the Employments of Life
Each Neighbour abuses his Brother;
Whore and Rogue they call Husband and Wife:
All Professions be-rogue one another:
The Priest calls the Lawyer a Cheat,
The Lawyer be-knaves the Divine:
And the Statesman, because he’s so great,
Thinks his Trade as honest as mine.

Here are a few of the ten blockheads. 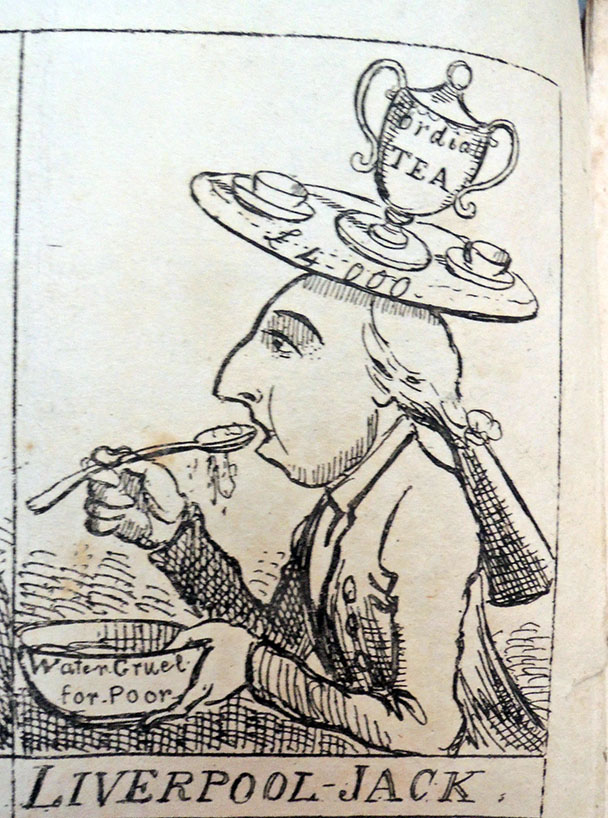 Identified by Dorothy George as Robert Banks Jenkinson, 2nd Earl of Liverpool (1770-1828), Prime minister 1812 to 1827. Also known as Liverpool. His verse reads in part:
Jack Jenkinson, secure as fate,
A stupid pillar of the State;
Whose father, o’ve the Atlantic wave,
In days of yore both got and gave,
Got places, money, meat, and fuel,
And fed the poor with water gruel; 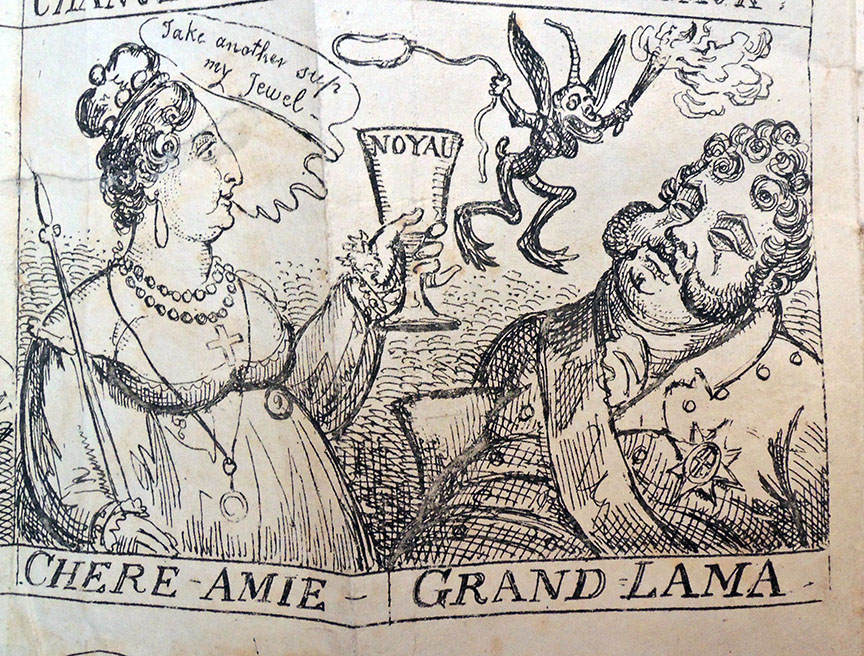 Isabella Anne Ingram Shepherd, 2nd Marchioness of Hertford (1760-1834), married Francis Ingram Seymour, Viscount Beauchamp, later 2nd Marquess of Hertford.
The lecture goes:
Her sparkling eyes, where Cupids muster,
Outshine the ruby’s polish’d lustre.
Yet crows’ feet, underneath her lashes,
Have mark’d her jolly cheeks with gashes;
And spite of dress, of airs, and pride,
Proclaim the age she fain would hide. 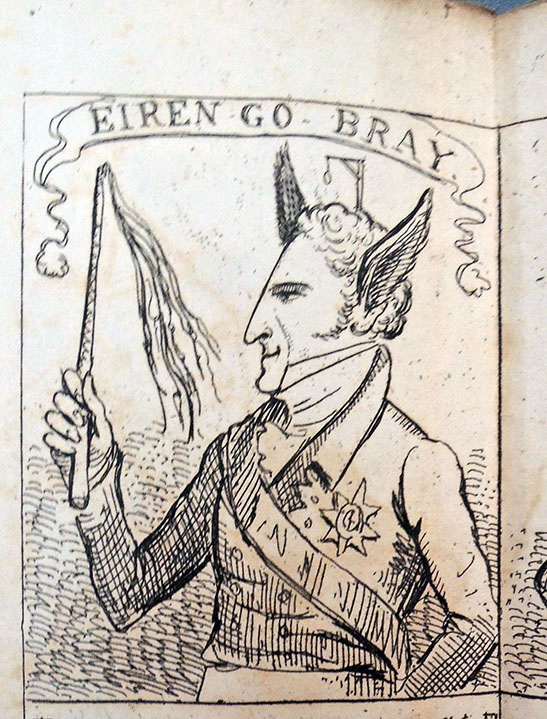 Robert Stewart, Viscount Castlereagh and 2nd Marquess of Londonderry (1769-1822). Better known as Viscount Castlereagh. As Chief Secretary for Ireland (1798-1801) was instrumental in the passage of the Act of Union in 1800, but his attempt to achieve subsequent political emancipation of Roman Catholics was unsuccessful. Pictured with ass’s ears and the motto Eiren-go-bray [Ireland Forever].
His lecture ends:
That head joust now consumed in smoke,
Around our necks has placed a yoke,
Which many a painful year ‘twill take
Either to lighten or to break;
And ages yet unknown to fame,
Shall curse the Irish Statesman’s name.