…Miss Burns was a professional harlot, the lawful daughter of a Durham merchant of the name of Matthews. She was in Edinburgh while Burns resided there in 1786-87. Some time afterwards she left the place, but returned again in 1789, and, with another young lady, set up a brothel in Rose Street. Being complained against, they were sentenced by Bailie William Creech to be banished the city; but, on 22nd December, the Court of Session passed a bill of suspension in their favour. Miss Burns died of consumption at Roslin in 1792.”– The Poetry of Robert Burns, Volume 2 (1905).

The London’s National Portrait Gallery adds: “Miss Burns, otherwise known as Miss Mathews, was a celebrated courtesan and beauty, who came to Edinburgh from Durham when her wealthy merchant father fell on hard times. She is shown by Kay as she appeared on her evening promenades, dressed in her fashionable finery. The stir she caused resulted in complaints from her scandalised neighbours. She was brought to court and sentenced to be banished from the city, and to be confined for 6 months in a house of correction should she return. The sentence was finally overturned on appeal.”

The Graphic Arts Collection holds a group of etchings by the Scottish barber-turned-artist John Kay (1742-1826). NPG calls John Kay a little known etcher, although many institutions in the United States have 100s of his prints. “Kay was an ex-barber and native of Edinburgh who turned to etching relatively late in life and produced many hundreds of original naïve and mostly humorous portraits of his fellow citizens.” Here are a few of ours. 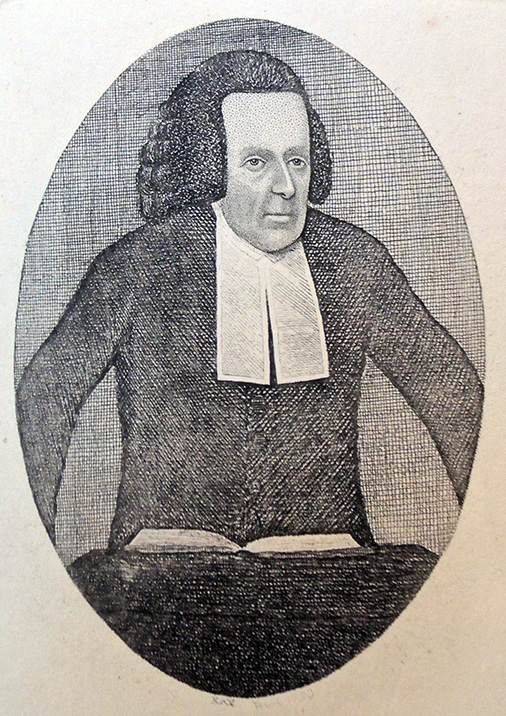 The name John Erskine (1721-1803) may not be familiar to the modern Christian world, but to his friends and colleagues he was the leading Calvinist clergyman of the Church of Scotland during much of the eighteenth-century. Despite his family’s desire for him to follow his father’s path in law and manage the eventual inheritance of a large estate in Carnock and Torryburn, he began his career as a preacher in the town of Kirkintilloch (1744-1753). As the leader of the Popular party, he opposed patronage in favor of a popular vote for ministers and would later serve at Edinburgh’s New Greyfriars (1758-1767) and Old Greyfriars (1767-1803). — http://themelios.thegospelcoalition.org/review/enlightened-evangelicalism-the-life-and-thought-of-john-erskine 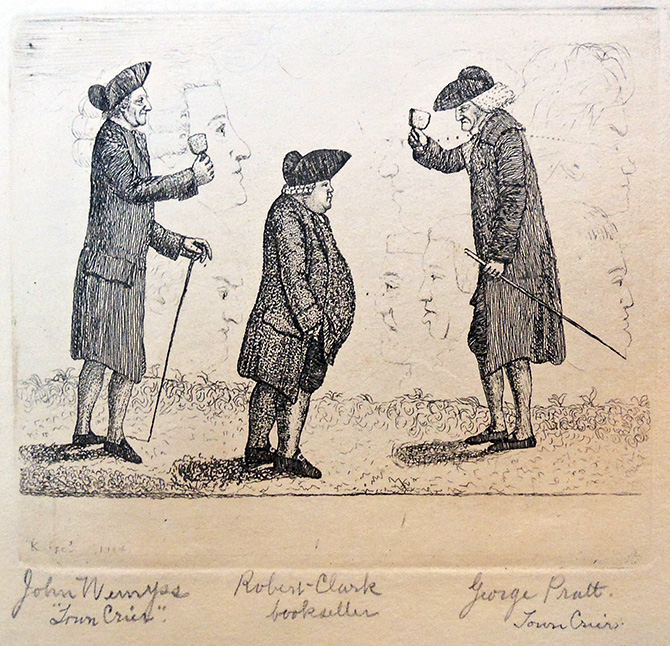 John Wemyss, the figure on the left, was, as the Print denotes, one of the Town Criers, and colleague of the eccentric and consequential George Pratt. He had formerly been a respectable dyer; but, owing to some reverses in business, he was reluctantly compelled to abandon the trade; and, from necessity, had recourse to the calling in which he is here represented. He was for many years officer to the Incorporation of Bonnet-makers, for which he received the sum of fifty shillings a-year!

…Mr Robert Clerk, the centre figure, was for many years a bookseller and publisher in the Parliament Square. His father, John Clerk, a printer, was said to have been descended from Alexander Clark, Lord Provost of the city of Edinburgh at the commencement of the seventeenth century. …Although at that period the book trade of Edinburgh was comparatively limited, he succeeded in establishing a profitable business—having a good many bookbinders employed—and latterly engaging in several fortunate speculations as a publisher.–A Series of Original Portraits and Caricature Etchings, Volume 2, Part 1 (1838) 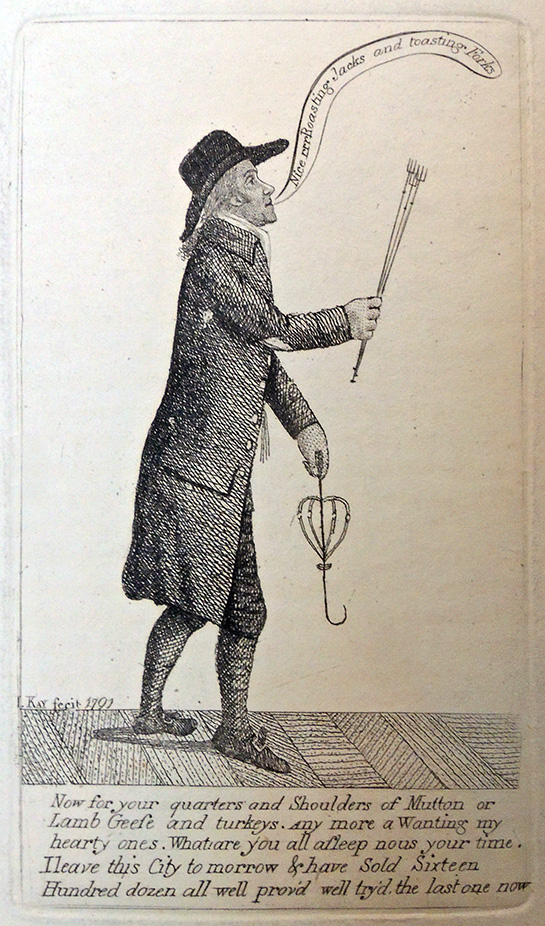 “Now for your quarters and Shoulders of Mutton or Lamb Geese and turkeys, any more a Wanting my hearty ones. What are you all asleep nous [sic] your time. I leave this City tomorrow & have Sold Sixteen Hundred down all well prov’d well try’d the last one now.” He says “Nice rrrRoasting Jacks and toasting Forks.”

McBain had been a soldier. Receiving no pension on retiring from the army, he became a manufacturer of roasting-jacks for turning meat and toasting-forks. He sold these on the streets of the city, singing his ‘roasting, toasting’ ditty. In old age he was admitted to the workhouse, but at 96 was expelled after becoming intimate with the elderly nurse. They married, and he returned to selling roasting-jacks, before being readmitted to the workhouse where he died aged 102.–NPG 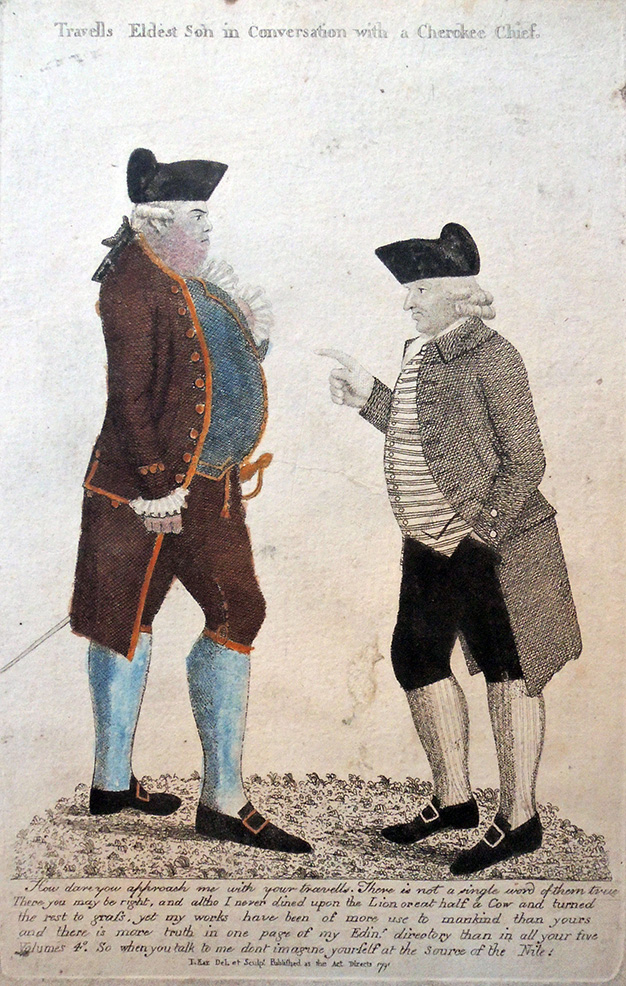 The taller (left), … is James Bruce, the Abyssinian traveller whose ‘Travels to Discover the Source of the Nile, 1768-1773’, appeared in 1790. The other is Williamson, an Edinburgh bookseller and tavern-keeper, who had published an account of his adventures in America: ‘French and Indian Cruelty exemplified in the Life of Peter Williamson’, 1757, &c, and compiled the first Edinburgh directory (1773).

Their words are engraved beneath the design: ‘[J. B.] How dare you approach me with your travells. There is not a single word of them true. [P. W.] There you may be right, and aliho I never dined upon the Lion or eat half a Cow and turned the rest to grass, yet my works have been of more use to mankind than yours and there is more truth in one page of my Edinh directory than in all your five Volumes 40. So when you talk to me dont imagine yourself at the Source of the Nile!’ –British Museum