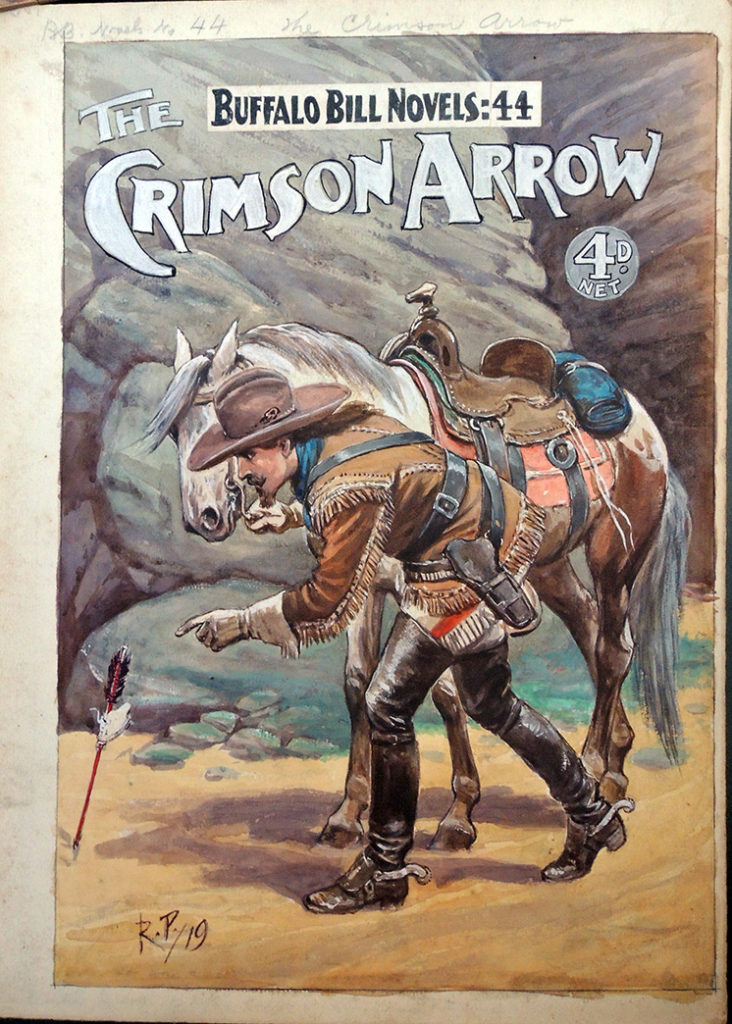 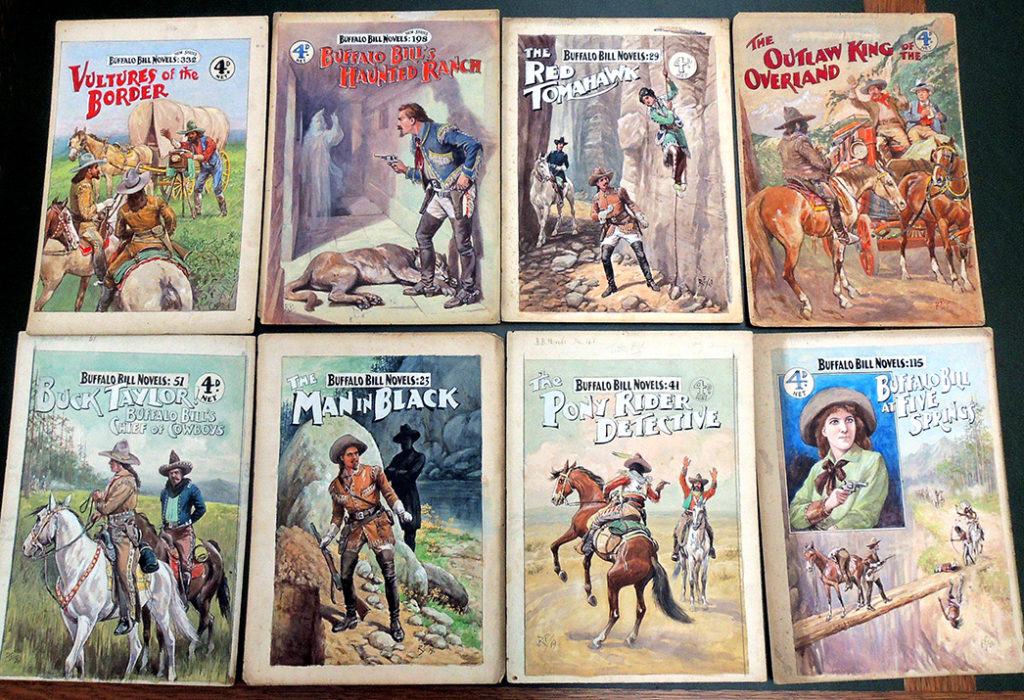 With the much appreciated support of the Friends of the Princeton University Library, the Graphic Arts Collection recently acquired a remarkable group of original cover art for the Buffalo Bill Novels, a British pulp magazine for boys and girls, published from 1916 to 1932 by the Aldine Publishing Company in London. Despite its name, the stories were not always about Buffalo Bill, though they were always set in the American West and featured plenty of cowboys and Indians (and even female heroes!). 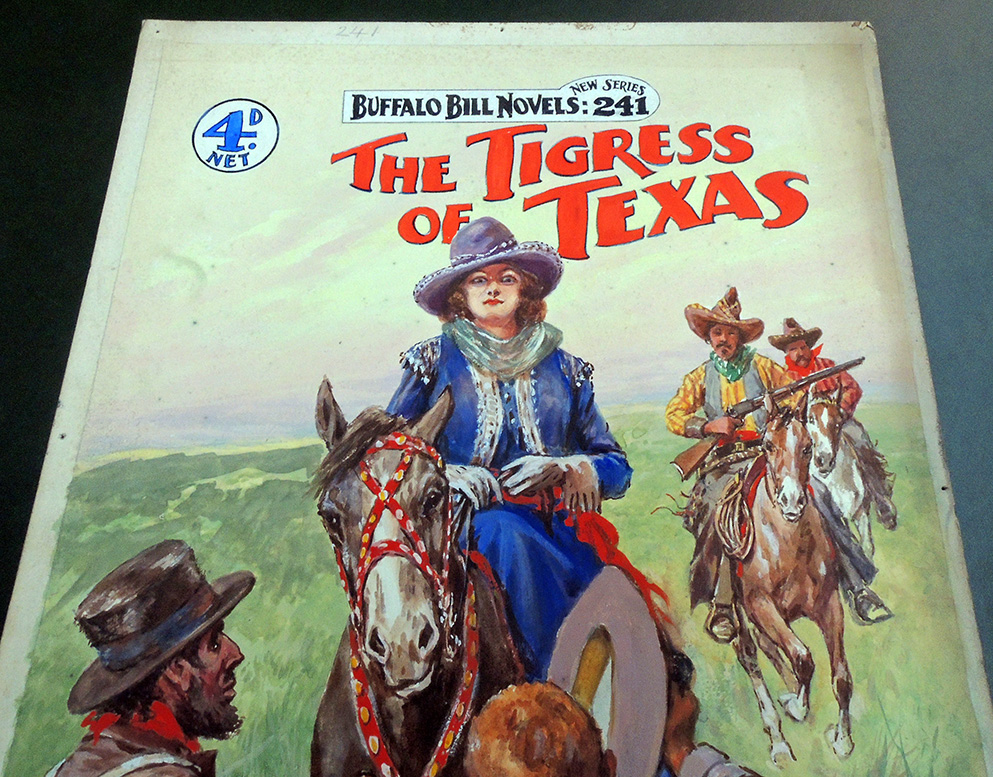 The paintings are all signed by Robert Prowse (R.P.), who did artwork for this and other similar projects; some are dated below his initials. The series ran for 342 issues, though the last cover in this collection is for No. 344, possibly an unpublished issue, as we could find no trace of this title associated with the Buffalo Bill Novels. See more here: http://john-adcock.blogspot.com/2014/08/robert-prowse-jr-sketches-and.html 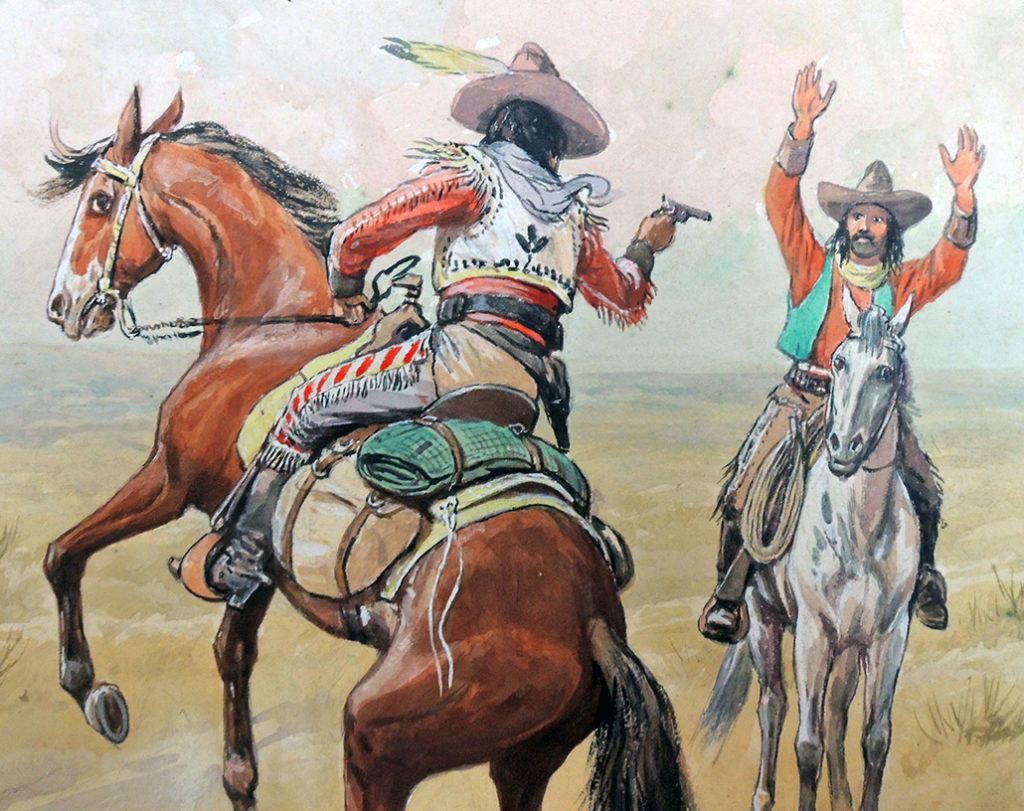 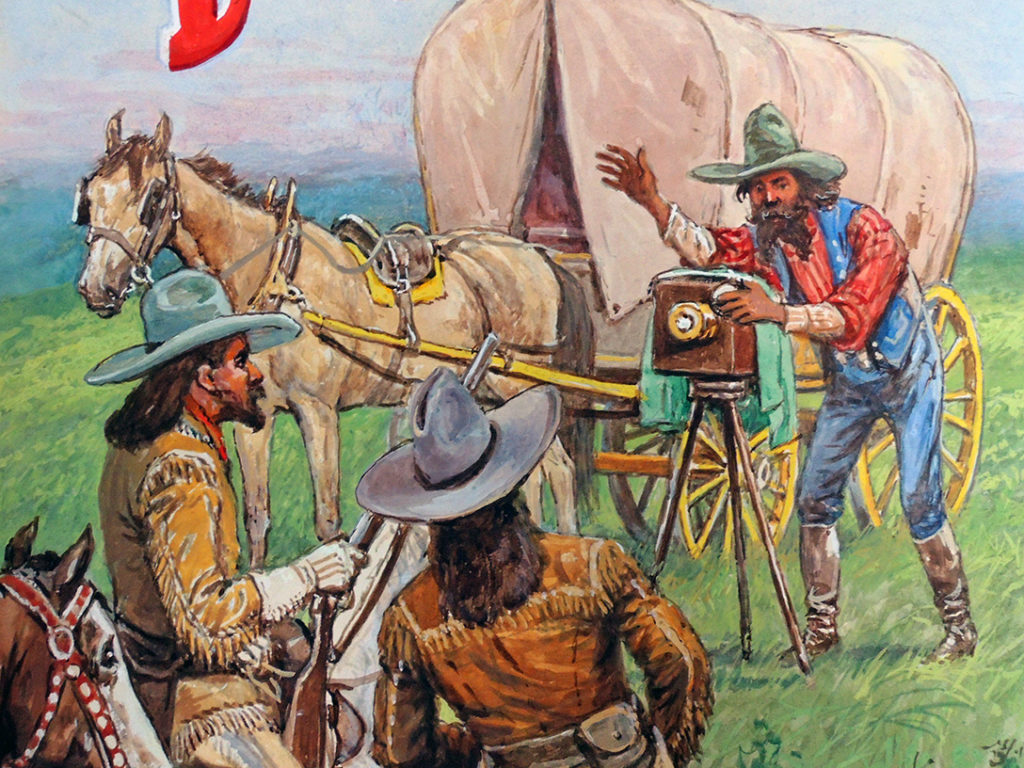 This acquisition will allow students and researchers to study the cover art along with the text, given the large number of these books already owned by Princeton. As outlined on the Special Collections website, “the Library’s extensive holdings relating to Dime Novels are divided chiefly among two collections. https://rbsc.princeton.edu/topics/dime-novels

One major portion, about 1,700 individual issues, is in the Cotsen Children’s Library. Some details about these are covered in the exhibition “Cheap Thrills,” mounted in Cotsen during the fall of 2006. The second major portion is in the general rare books collection, chiefly in three sub-units thereof, namely The Stanley Lieberman Memorial Collection (900 individual numbers); The Mary Robinson Memorial Collection of Hero Fiction (400 individual numbers); The John Murray Reynolds ’22 Collection, consisting of 111 issues of various dime-novel, mystery, and other such pulp magazines published in the United States between 1925 and 1947.

Each issue contains a story or contribution by John Murray Reynolds of the Class of 1922. A checklist is available here: https://library.princeton.edu/libraries/firestone/rbsc/aids/BIB_70767.pdf. The Stanley Lieberman Memorial Collection and the Mary Robinson Memorial Collection of Hero Fiction complement each other to form a fine collection of Hero Fiction, with a total of about 1,300 volumes. There is also the John Murray Reynolds ’22 Collection, which consists of 111 issues of various boys, dime-novel, mystery, and other such pulp magazines published in the United States between 1925 and 1947.” 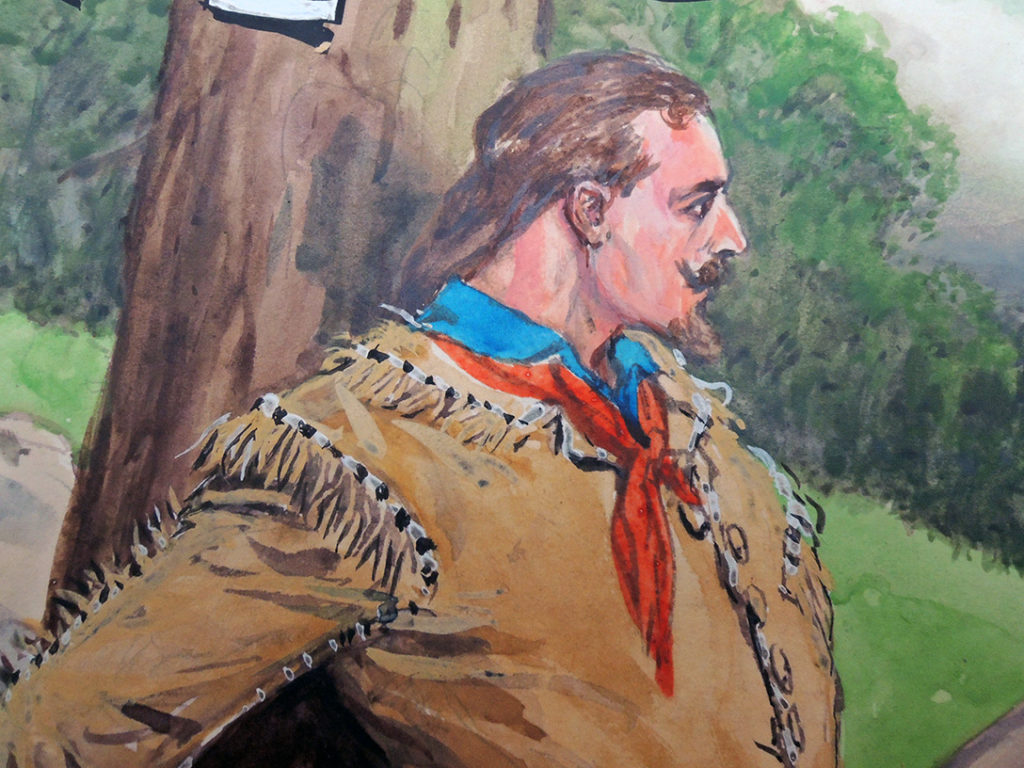 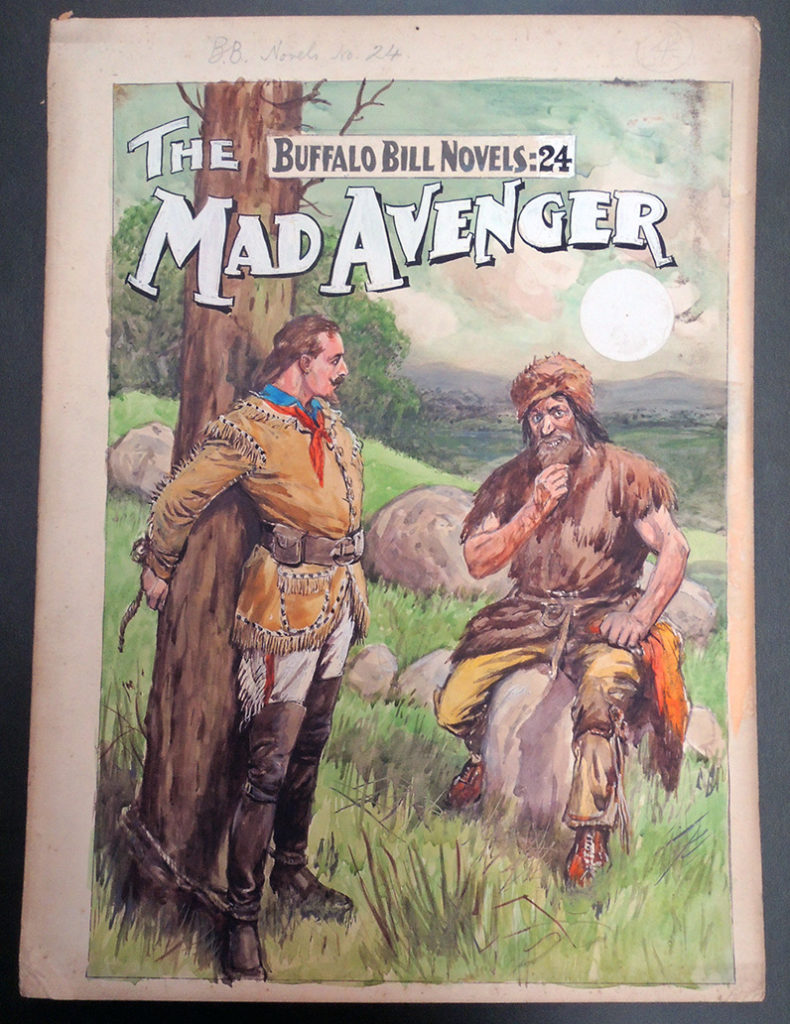 Above: original painting for cover.       Below: published volume with printed cover. 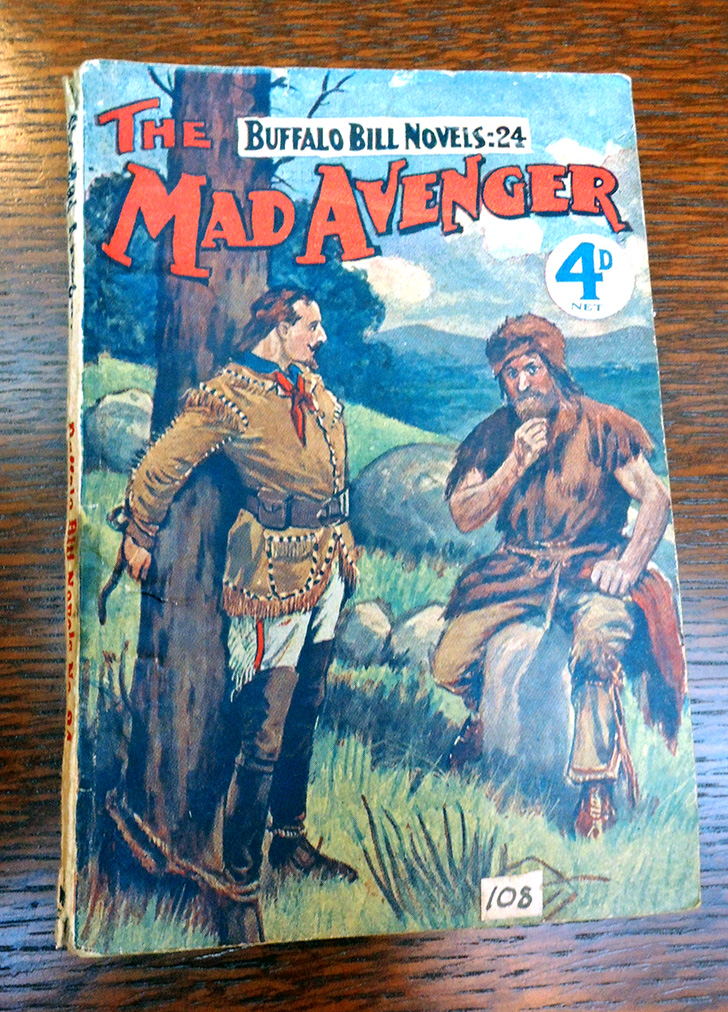 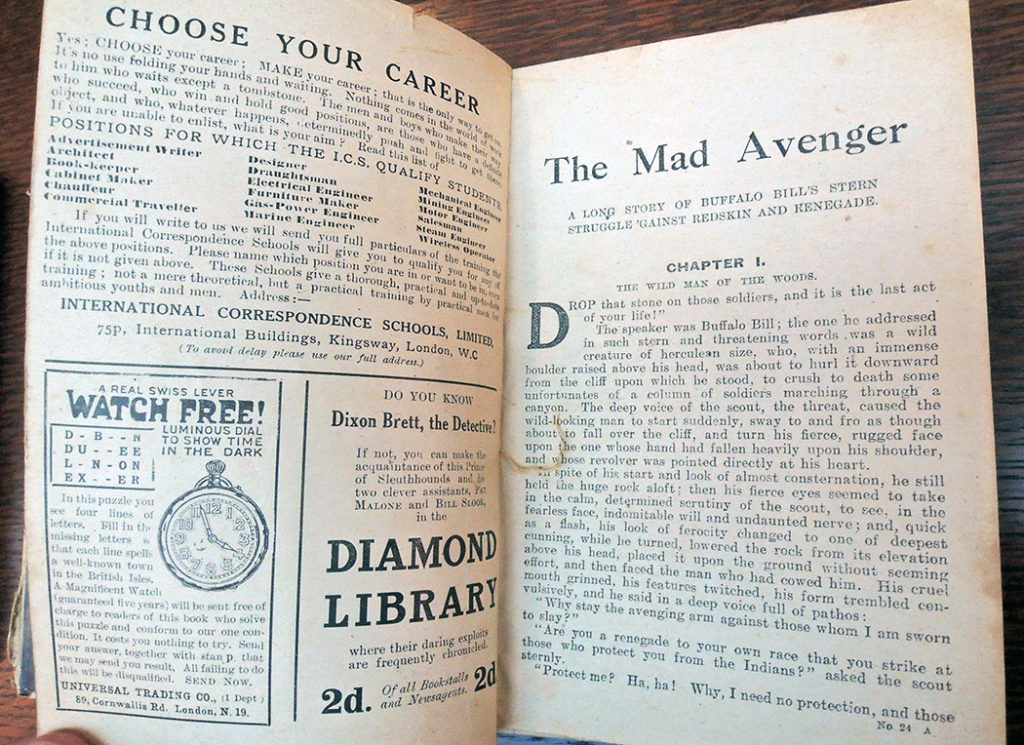 American publishers weren’t the only ones cashing in on the pulp magazines craze and this collection offers a good example of international hegemony of the genre. The Aldine Publishing Company of London produced, from the late 1880s onwards, reprints of American dime novels, such as the adventures of Buffalo Bill, eventually opening a subsidiary in New York.