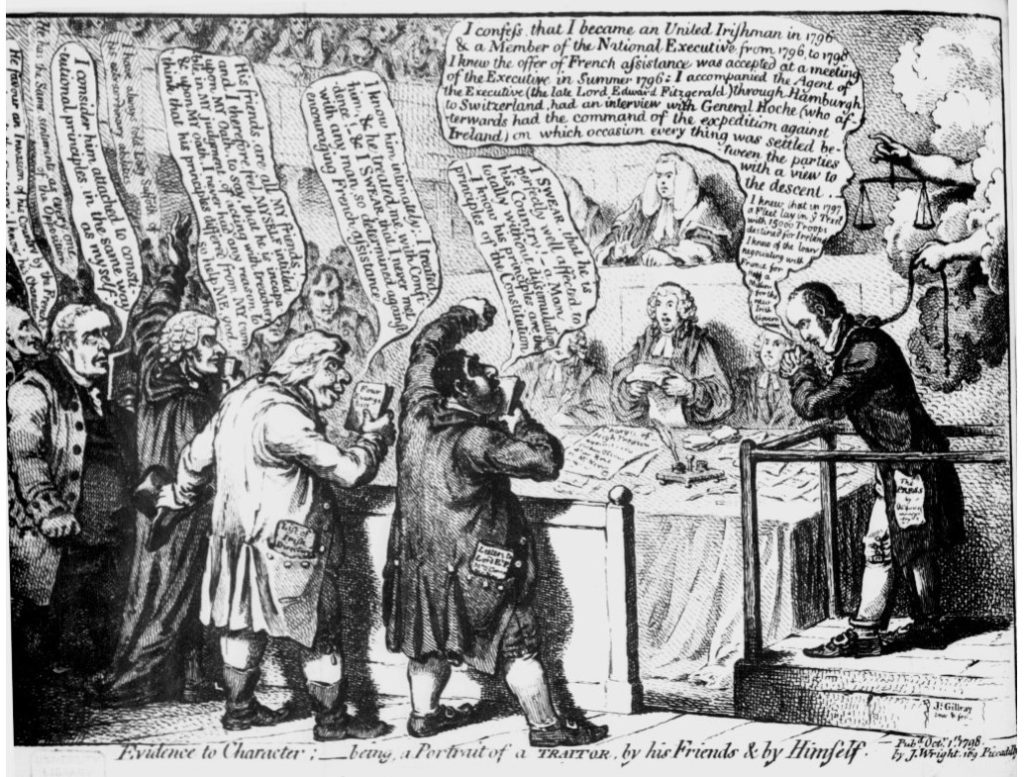 James Gillray (1756-1815), Evidence to character; Being a portrait of a traitor, by his friends & by himself, October 1, 1798. Etching. Graphic Arts Collection. First published in Anti-Jacobin Review, September 1798, p.285 [above] then issued as a separate print. [below] 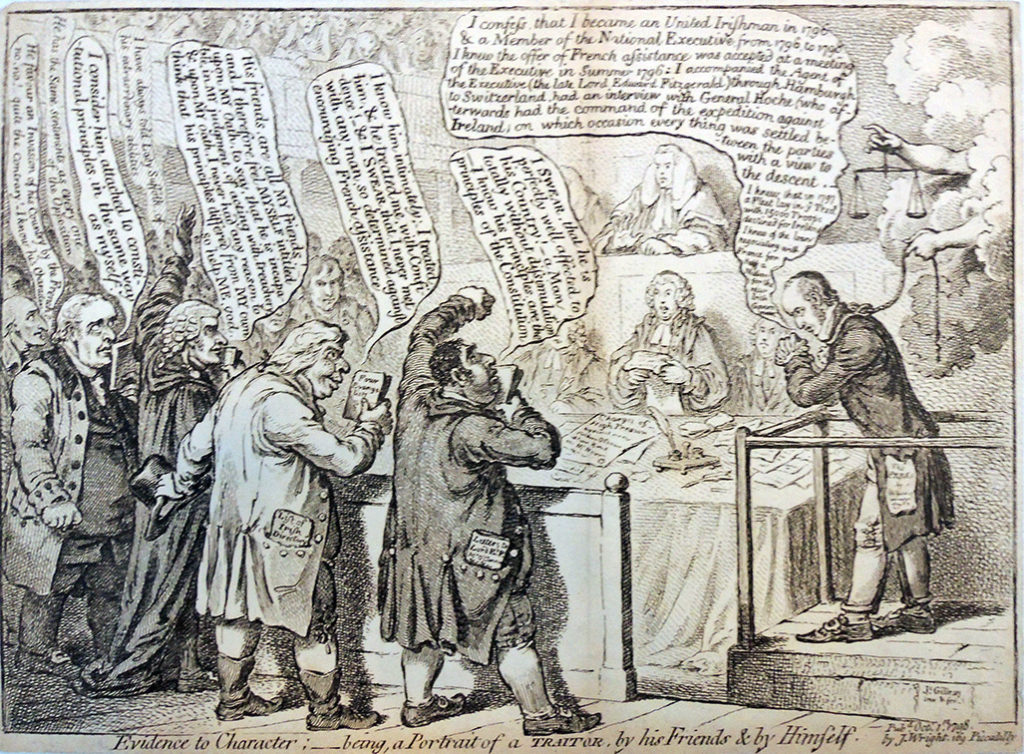 On 27th February 1798 [Arthur O’Connor] and his friend Rev. James O’Coigley… with Binns, Allen, and Leary, were arrested at Margate, on their way to France, on a supposed mission from the United Irishmen. In O’Connor’s baggage were found a military uniform, £900 in cash, and the key to a cipher correspondence with Lord Edward FitzGerald. …
O’Coigley, who was sentenced to death, and executed on Pennington Heath…O’Connor…was transferred to Dublin and committed to Newgate.
…The examination of O’Connor and his fellow-prisoners before select committees of the Irish Lords and Commons throws the fullest light upon the origin and progress of the movement that led to the Insurrection of 1798.–https://www.libraryireland.com/biography/ArthurOConnor.php 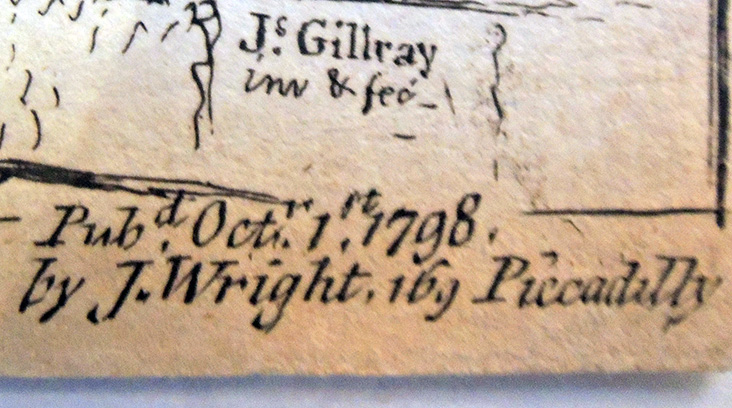 Rather than caricature current events, here James Gillray merely transcribed the testimony at the trial of Arthur O’Connor (1763-1852) on May 22, 1798 at Maidstone. Extracts were published in damaging juxtaposition in Wright’s pamphlet, Evidence to Character; or, the Innocent Imposture: being … [ut supra] [below]. The introduction concludes: ‘It is not often that such Information as this can be obtained for the Public, from the Parties themselves on Oath.’

Lord Carlisle wrote: “If there is a lower political hell than any we before have witnessed, I think the opposition have found it out for themselves, by their connection with O’Connor and such worthies.” Auckland Corr.’ iv. 52. 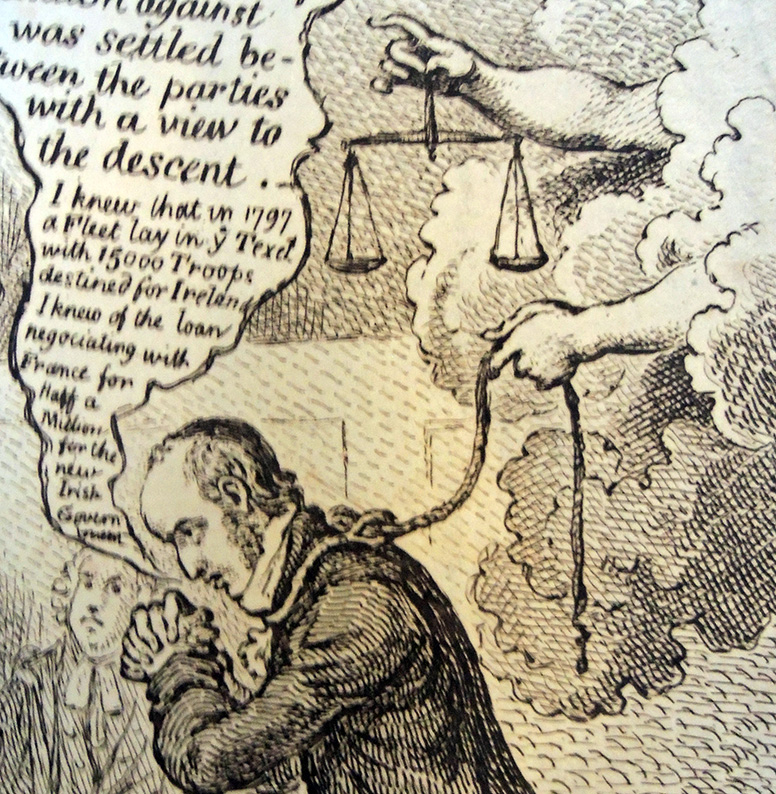 In Gillray’s print O’Connor stands at the bar making a confession which, though condensed, does not differ substantially from that made by him, McNevin, and Emmet, published in the Report of the Secret Committee made to the Irish House of Commons on 21 Aug. “I confess, that I became an United Irishman in 1796 & a Member of the National Executive, from 1796, to 1798. …”

The witnesses include Fox: “I swear that he is perfectly well affected to his Country, – a Man totally without dissimulation – i know his principles are the principles of the Constitution”. (Fox said: “I always thought Mr O’Connor to be perfectly well affected to his country . . . attached to the principles and the constitution of this country, upon which the present family sit upon the throne, and to which we owe all our liberties.” 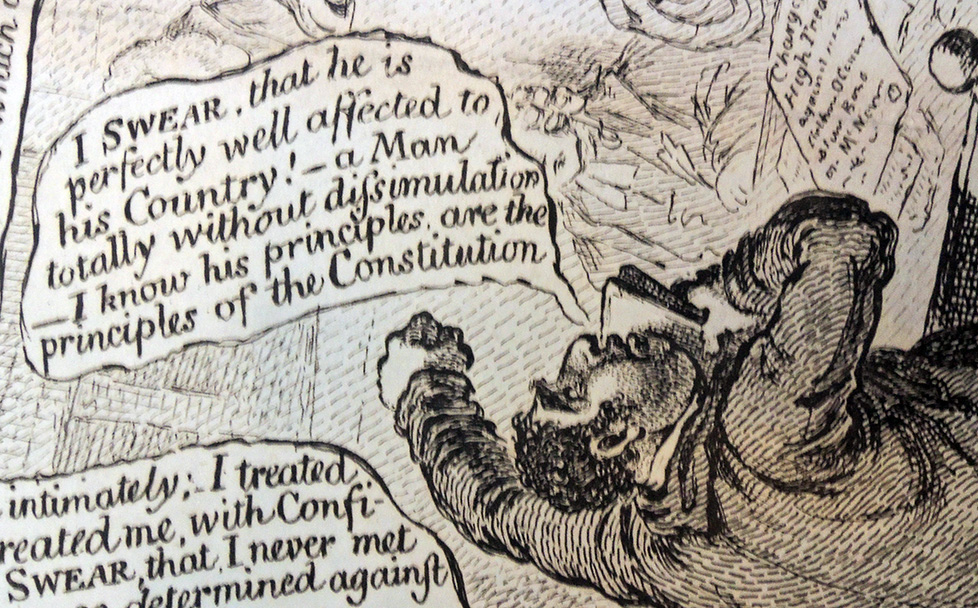 Next stands Sheridan: “I know him intimately; – I treated him, & he treated me, with Confidence! – & I Swear, that, I never met with any man, so determined against encouraging French Assistance”. The last words resemble those of Sheridan, with the significant omission ‘in this country’.

Next is Erskine: “His friends, are all MY friends! and I therefore, feel MYSELF intitled upon MY Oath, to say, that he is incapable, in MY judgement, of acting with treachery, & upon MY oath, I never had any reason to think that his principles differed from MY own so help ME god” Though abbreviated, this is only very slightly burlesqued.

Next is the Duke of Norfolk: “I consider him attached to constitutional principles, in the Same way as myself”. His evidence ended ‘I consider him as a gentleman acting warmly in the political line and attached to . . . [ut supra]”.

The trial of O’Connor, with O’Coigley and others, at Maidstone is combined with the proceedings in Dublin after the Irish Rebellion. For the confessions see ‘Report from the Committee of Secrecy of the House of Commons in Ireland’, 21 Aug. 1798, Appendix xxxi. https://catalog.hathitrust.org/Record/008586460 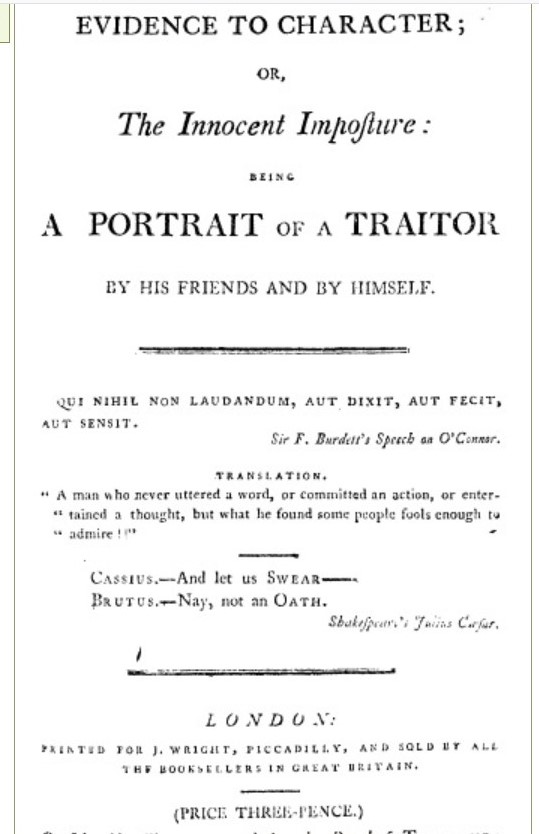