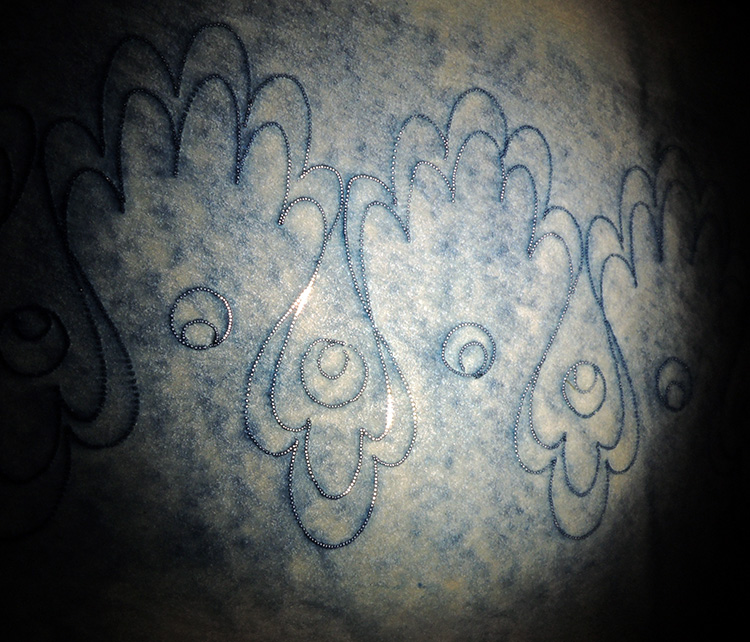 The Graphic Arts Collection recently acquired a group of 83 perforated designs or pounce patterns, assumed to be stencils made to transfer a design to fabric for embroidery or other decoration. In addition, there is a circular from August Bernard, described as the successor to Leon Cendrier, “designer, manufacturer, & importer of perforated French stamping patterns for braiding and embroidery,” located at 401 Canal Street, New York City. There is nothing on the sheets to verify they are from Bernard’s shop, but the flier confirms he had, at that time, the largest collection of such patterns in the United States, so it is likely these came Bernard. 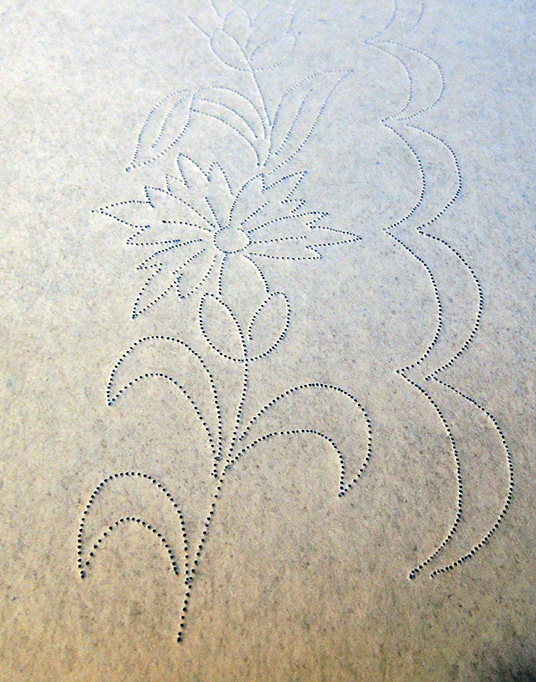 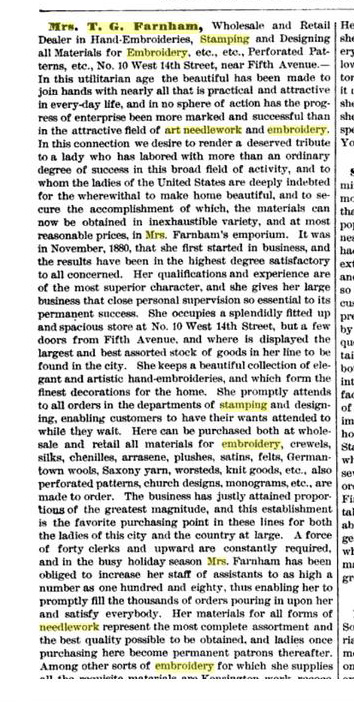 One other possible source for these vegetable parchment patterns might be Mrs. T.G. Farnham. On the verso of one of the decorated initial patterns is the rubber stamp of “Mrs. T.G. Farnham, Art Needlework, Stamping, Embroidery, Etc., 16 West 14th St., N.Y. City.”

In the 1880s, Farnham advertised perforated patterns etc. for sale in such magazines as Harper’s Bazar and The Youth’s Companion and was the author of Home Beautiful, a Descriptive Catalogue of Art Needle Work (New York, 1884).

The article on the left was found in New York’s Great Industries: Exchange and Commercial Review, Embracing Also Historical and Descriptive Sketch of the City, Its Leading Merchants and Manufacturers .. (Historical Publishing Company, 1884). Neither Bernard or Cendrier are listed. 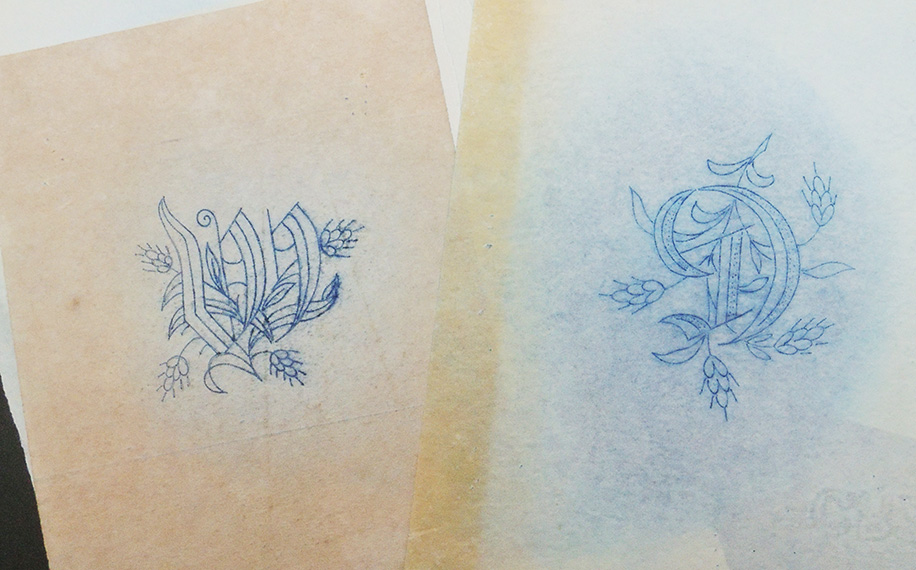 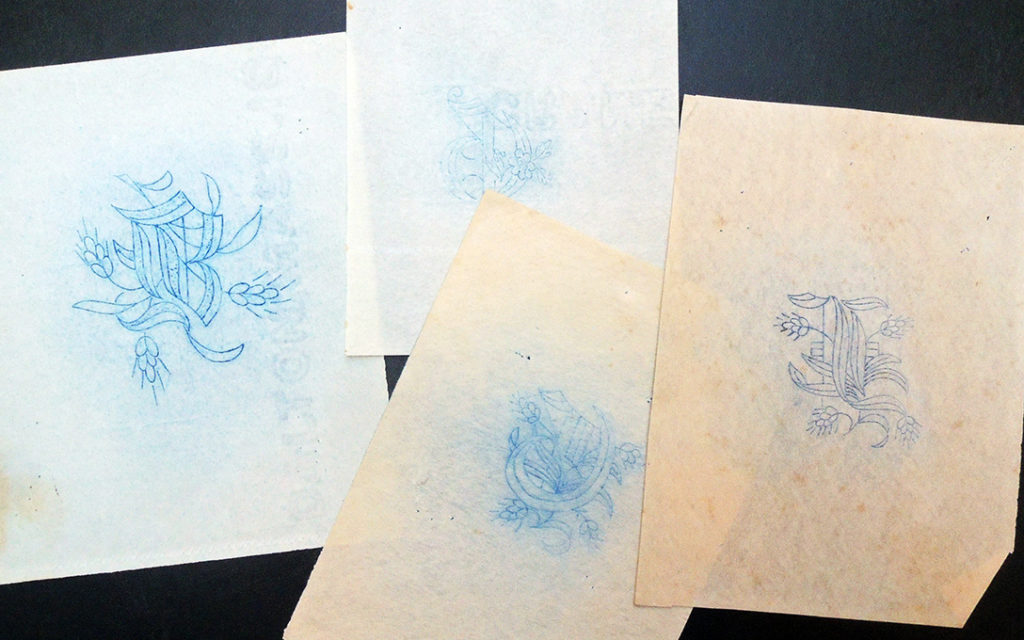 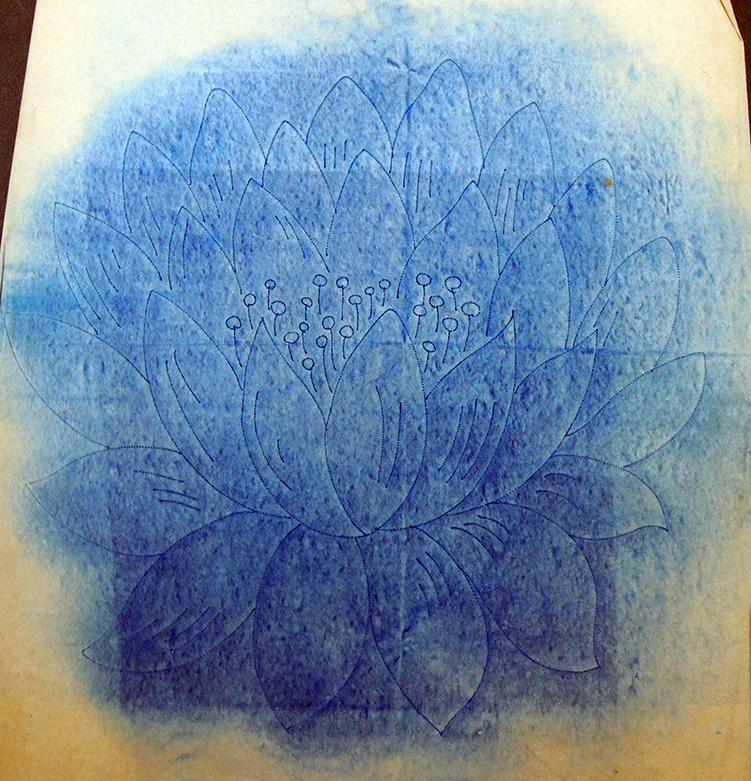 Of course, anyone can make their own patterns but these are extremely detailed and regular in their piercing, suggesting they were made by an experienced commercial vendor.

Both Bernard and Farnham also sold the colored powders and fine felt pounces used to apply the powders to the patterns. The same waxy blue powder is found on the rectos of most of the patterns in the portfolio, indicating they were all used by the same person. One of the patterns bears a partial watermark “CO. DALTON MA”, suggesting that the vegetable parchment was made by Crane and Company. 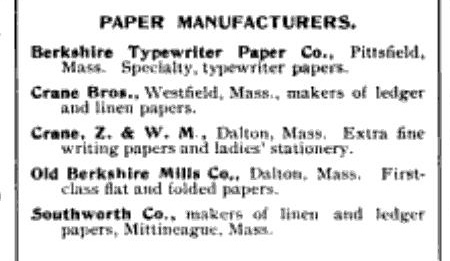 Most paper stencils were used and soon discarded as they became worn out. The Graphic Arts Collection has a number of metal stencils and horsehair Japanese stencils but very few on paper or vegetable parchment as these have been described. This is a rare surviving collection. 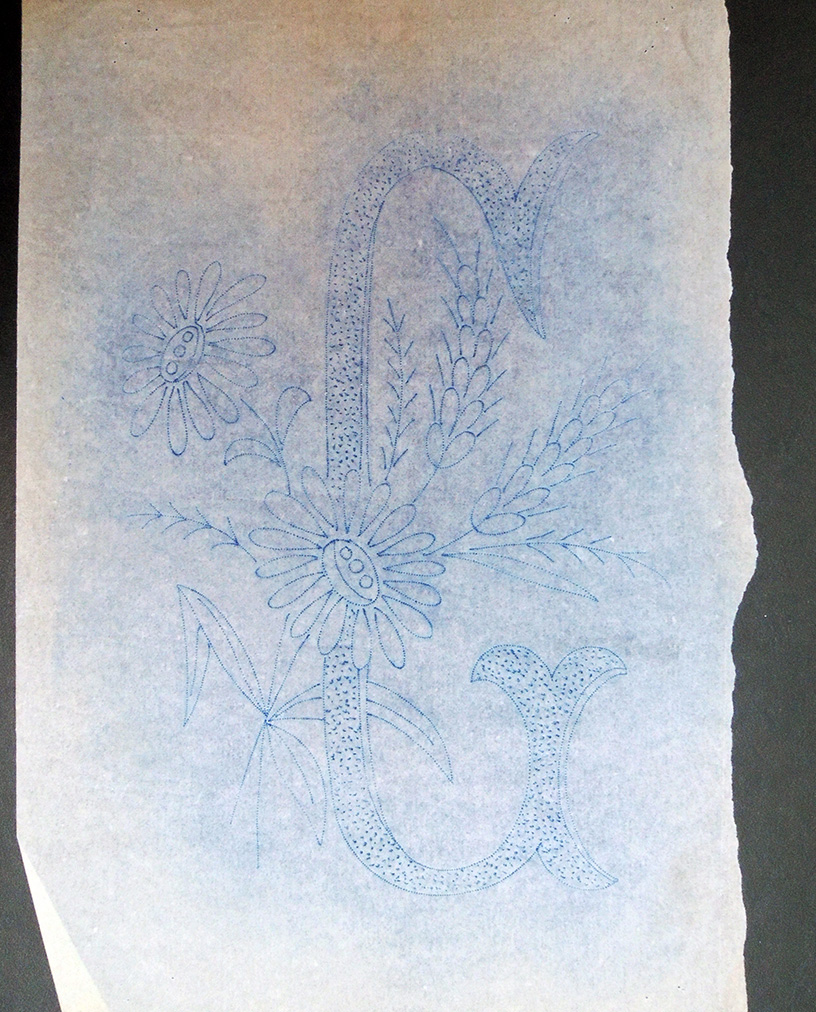 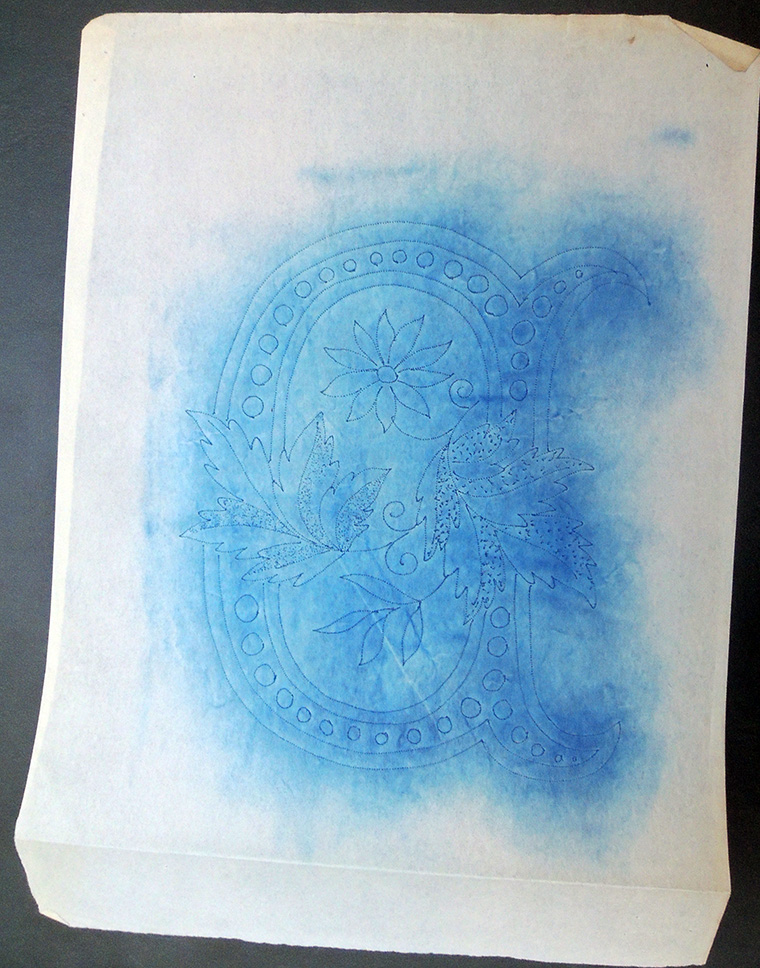 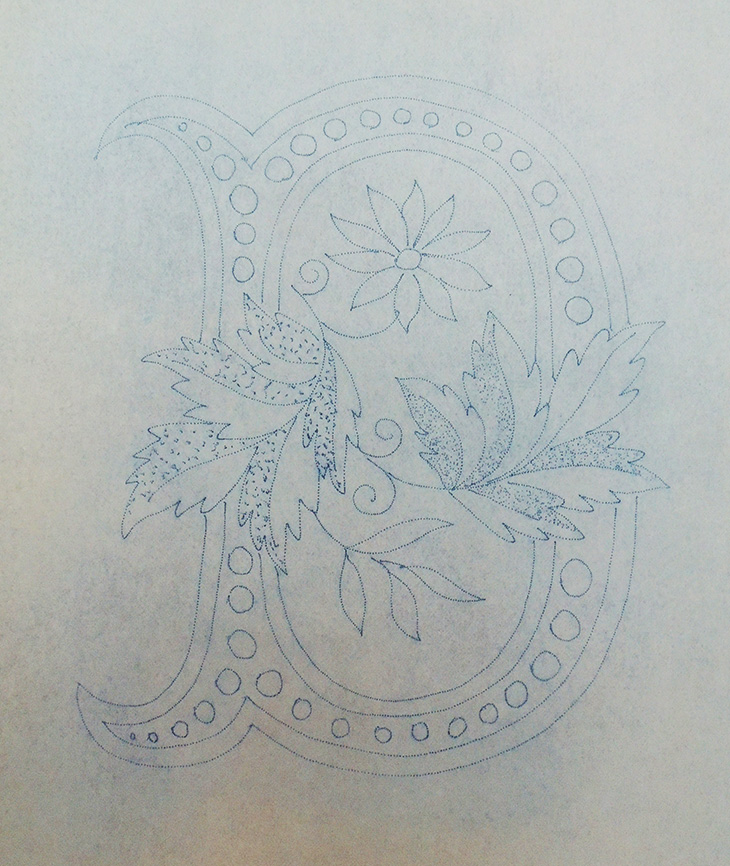 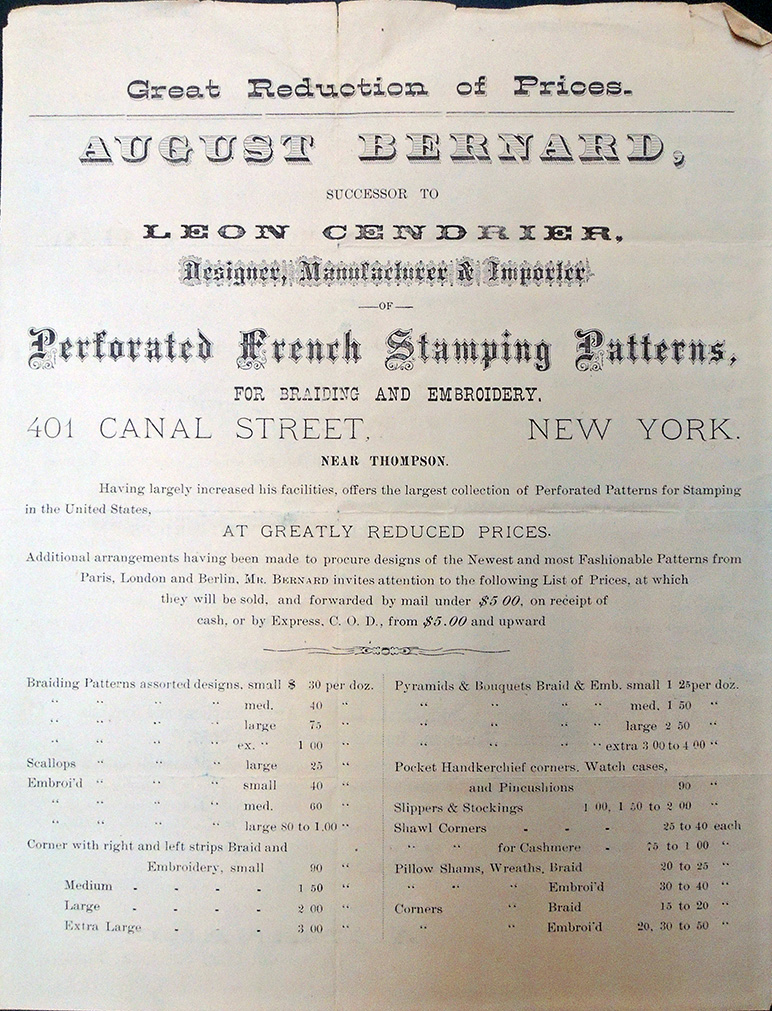 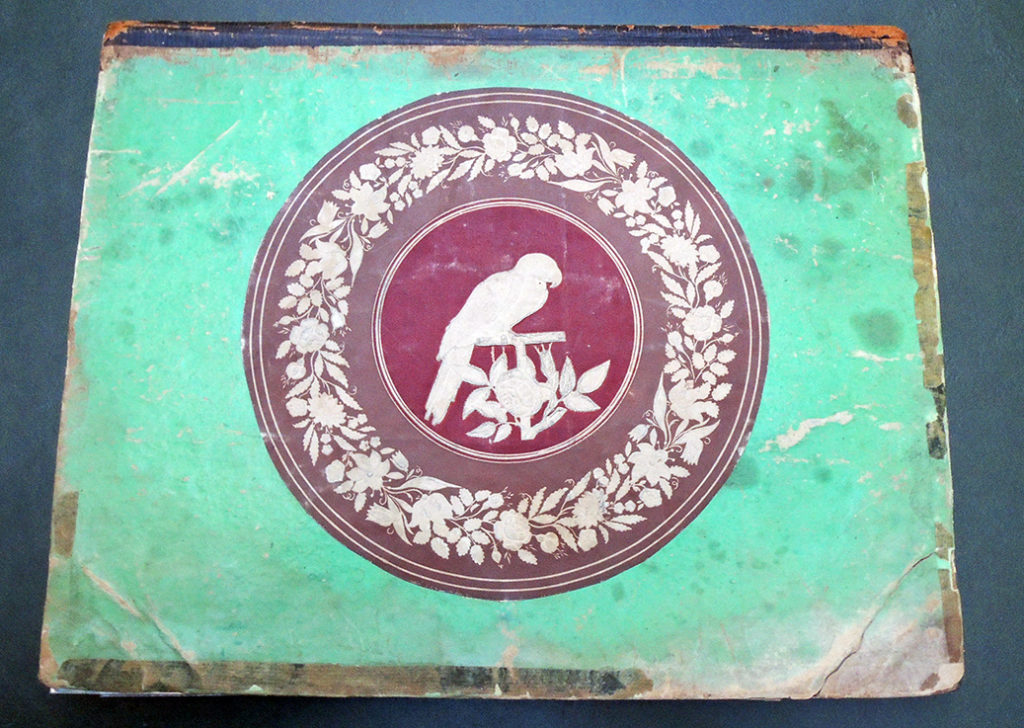