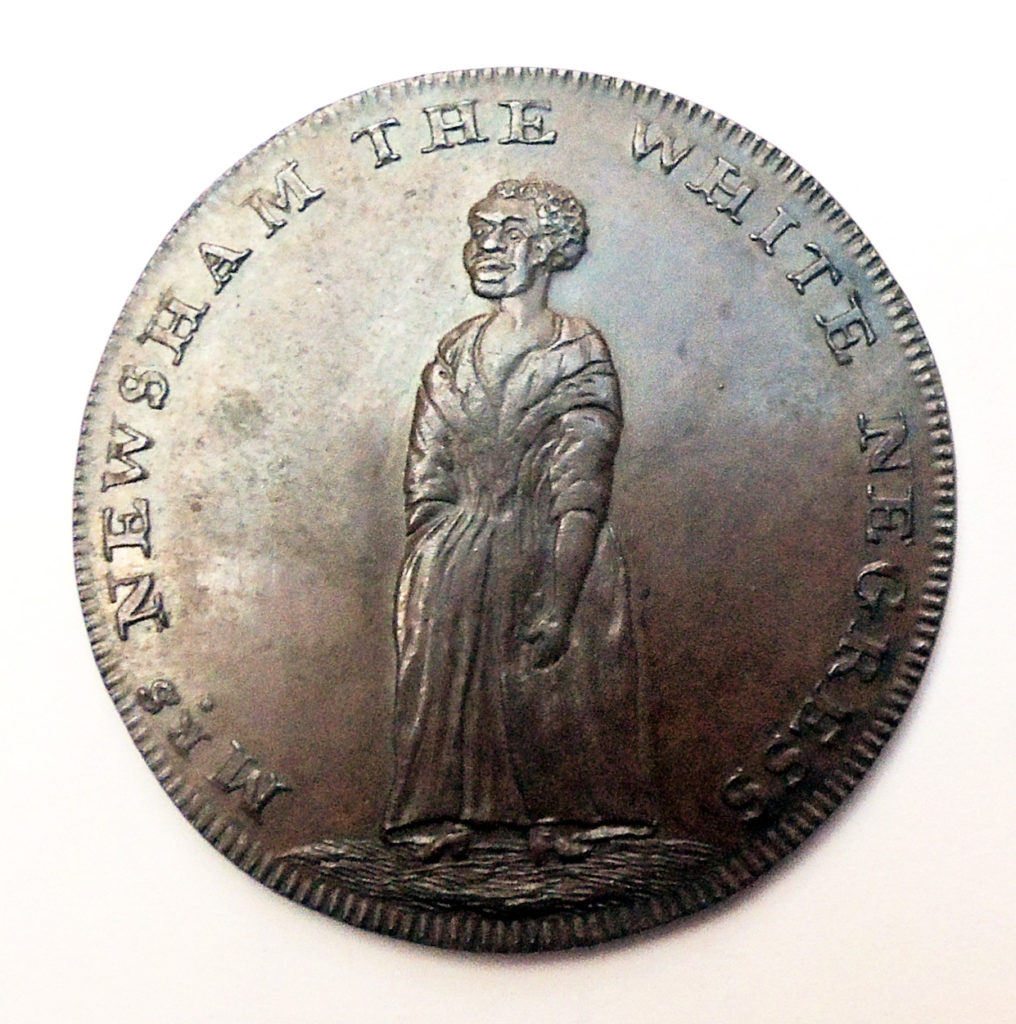 According to the DNB, Amelia Lewsham or Newsham “a white negress, was born in Jamaica about 1748 to a black couple from whom she inherited a recessive gene causing albinism. She was described as being ‘as fair as the fairest among the Europeans’ (The White Negro Girl), although her features were those of her parents, of west African origin. Her mother was a house slave of Sir Simon Clarke, sixth baronet, who lived in Spanish Town.

In 1753 Clarke sent her to England, to his son Kingsmill Clarke of the Inner Temple. He sold Amelia to John Bennett or Burnet, who kept a bird and beast shop off St Martin’s Lane in London. Kingsmill Clarke asked for 400 guineas, although Amelia was probably bought for less. Amelia ‘had the Honour to be shewn to the Royal Family, and to the Royal Society’, as well as to ordinary people prepared to pay 1 shilling. She also toured the country and on 17 April 1766 was baptized in St Lawrence’s, Exeter, Devon, under the name Amelia Harlequin. She believed, like many black people, that baptism made her free and at this point she left John Burnet to exhibit herself.”  https://doi.org/10.1093/ref:odnb/98525 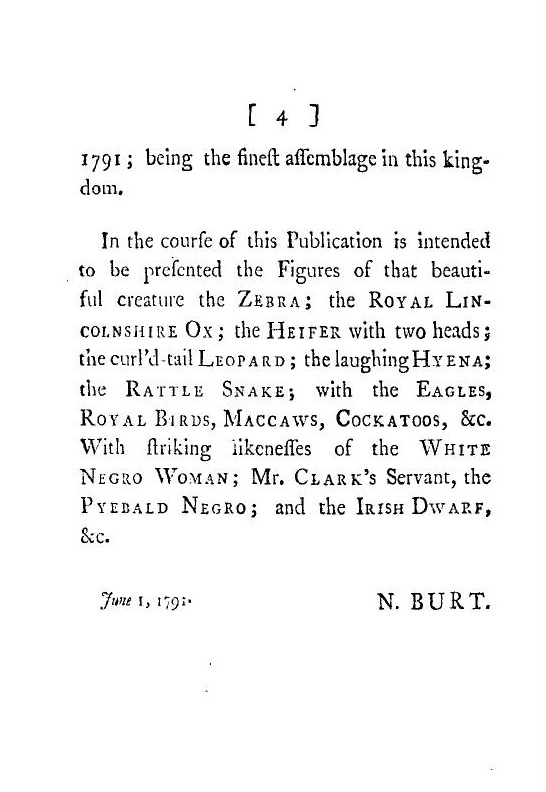 Lewsham continued to exhibit herself at many theaters. On the left is a description from the preface of Burt’s Delineation of Curious Foreign Beasts and Birds in their Natural Colours, which are to be seen alive at the great room over Exeter Change, and at the Lyceum, in the Strand (1791).

By 1795, she was working at the House of Curiosities run by Thomas Hall at No. 10 City Road in London. Several visitors made note of a verse she recited:

My nose, my lips, my features, all explore,
The just resemblance of a blackamore;
And on my head the silver-coloured wool
Gives further demonstration clear and full.
This curious age may with amazement view
What after ages won’t believe is true. 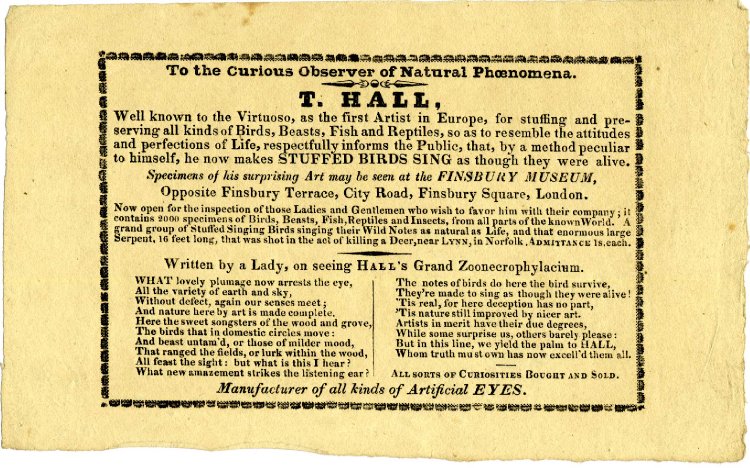 Here is an advertising ticket for Hall’s House of Curiosities, RMG, Retrieved January 31, 2020. Lettered with long advertisement for the tradesman: ‘To the curious observers of natural phœnomena, T. Hall, well known to the virtuosi… Specimens of his surprising art may be seen at the Finsbury Museum, opposite Finsbury Terrace, City Road, Finsbury Square, London. Now open for the inspection of those ladies and gentlemen who wish to favour him with their company; it contains 2000 specimens of birds, beasts, fish, reptiles and insects, from all parts of the known world… Admittance 1s. each… All sorts of curiosities bought and sold. Manufacturer of all kinds of artificial eyes.’; also with a poem ‘written by a lady, on seeing Hall’s Grand Zoonecrophylacium’, beginning: ‘What lovely plumage now arrests the eye, / All the variety of earth and sky…” 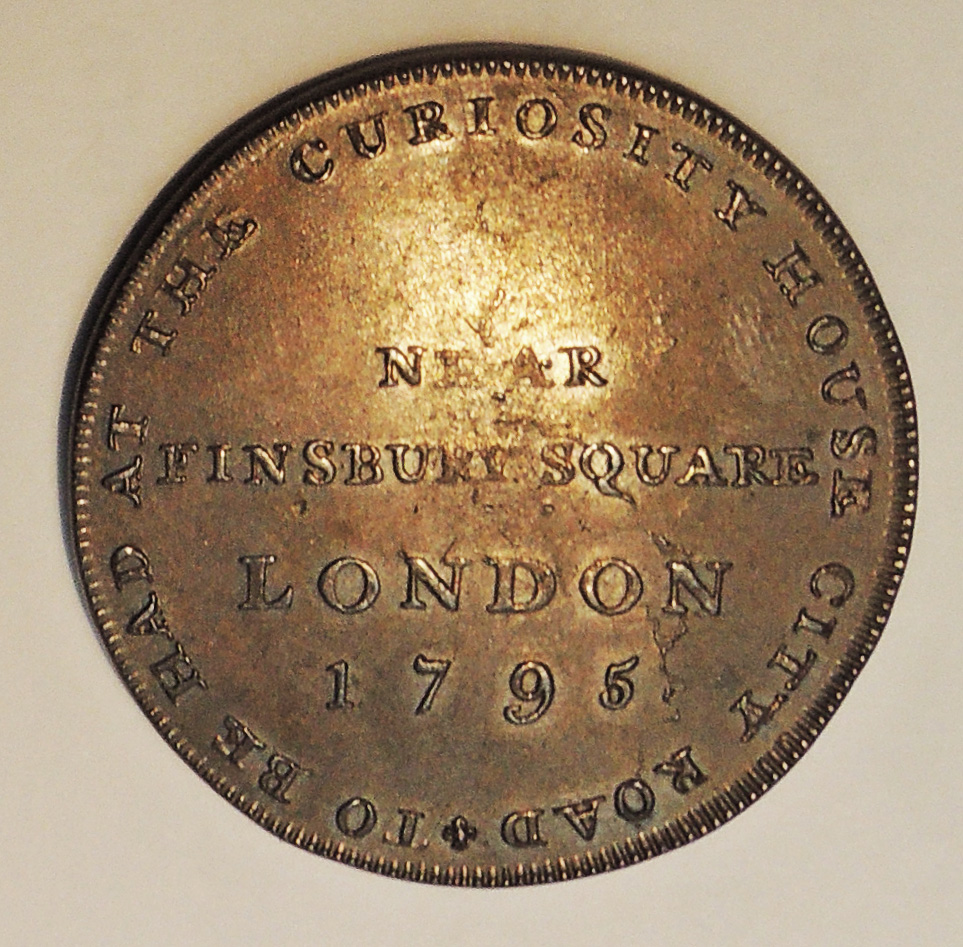