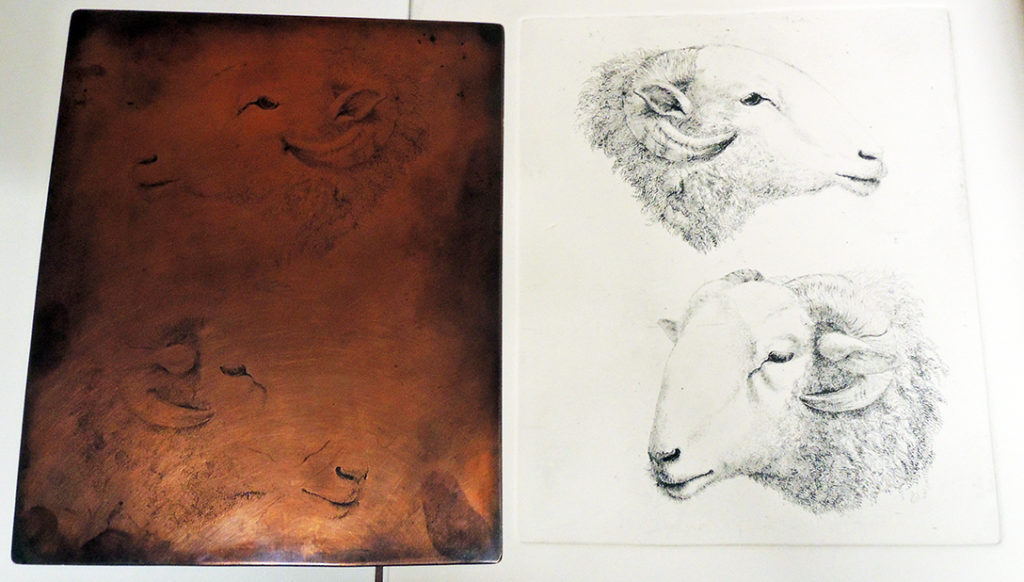 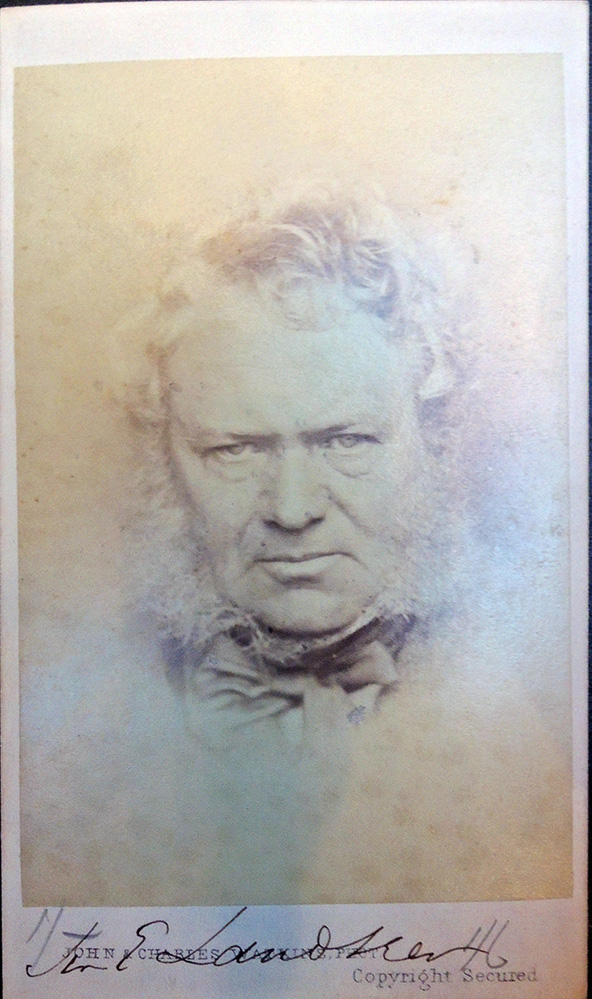 The Graphic Arts Collection recently acquired the original copper plates for six of Edwin Landseer’s juvenile etchings made between the ages of 8 and 10, including his first etching and a previously unpublished and unrecorded plate. These came along with the 1974 re-strikes of five of the plates and a new impression of the unrecorded sixth plate [above]. The plates are clear and the images visible, even though the photography here might not appear to be.

Here is the full description of the plates, transcribed exactly from Roger Gaskell’s excellent research:

2b A Cow and two Lambs’ Heads. This must always have been intended as a trial because the image is close to the stamped name of the plate maker and would be difficult to print without taking an impression of the stamp. There are a few scratches as can be seen in 1974 re-strike. Unknown to Graves.

129 x 115 x 1.43mm, rounded corners, makers name ‘G. Harris No 31 Shoe Lane London’ stamped on the back. Scratched number 11[?] and oblique scoring on the back. Graves 6; BM 1853,049.26 (unlettered proof inscribed at left beside top donkey ‘EL, Delt & Sculp’ and blow image ‘EL’ at left and ‘TL’ at right); RCIN 815002. The legend on the plate ascribes the etching to Thomas Landseer (1795–1880), Edwin’s the elder brother but Graves ascribes it to Edwin Landseer. In fact they both had a hand, the pencilled inscription on the BM impression indicating that the etching of the donkey at the top was done by Edwin and the donkey and foal below by Thomas Landseer.

204 x 167 x 1.31mm, edges bevelled on the back, rounded corners. ‘Landseer’ and ‘15’ scratched on the back. Maker’s name ‘G. Harris No 31 Shoe Lane London’. Punched on the back half way down on the right hand side, perhaps for an erasure as there is no etching on the face at this point. Although unsigned, the style of the plate, its survival with Landseer’s other juvenile etchings and the scratched name on the back leave little doubt that this is his work and thus a new addition to his oeuvre. Unknown to Graves; no impressions located. 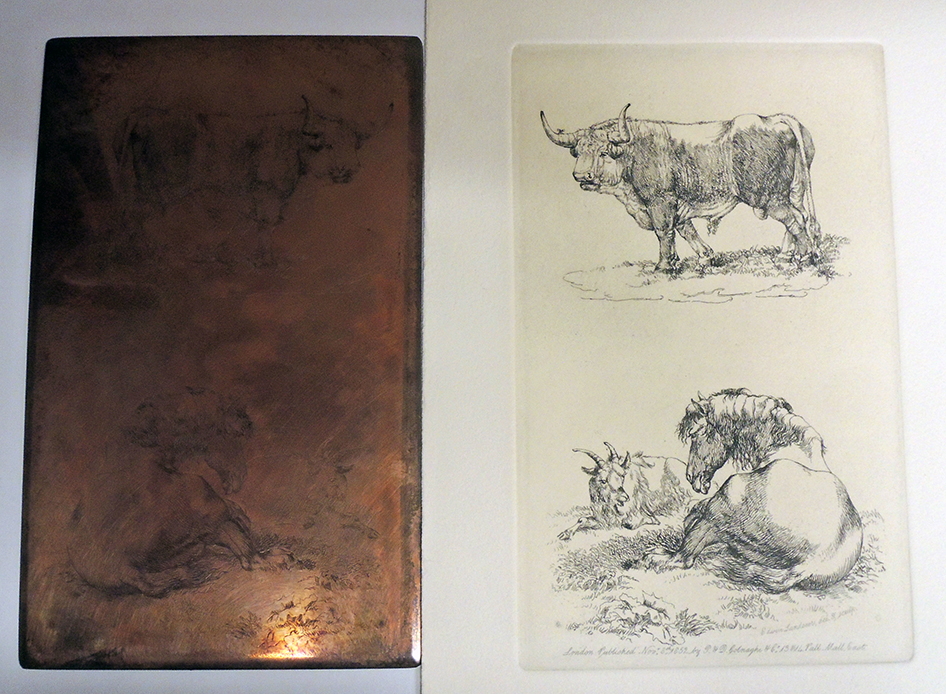 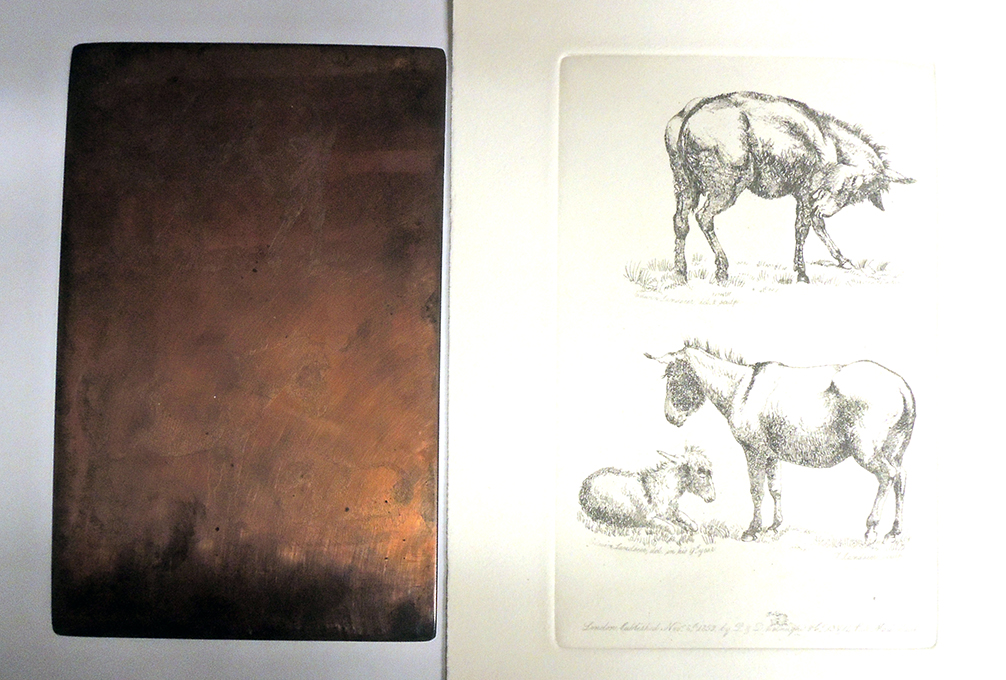 The plates were probably not have been published in Landseer’s youth. By 1852 they were in the possession of Peter and Dominic Colnaghi who published restrikes of five of them with new lettering identifying the artist and adding their imprint. These prints are very rare so the edition was probably small. Predictably there are impressions in the Royal Collection. The British Museum holds rather messy unlettered proofs of four of the plates, probably the artist’s proofs with pencil lettering which is evidently the source of the lettering added by Colnaghi, who sold the proofs to the Museum in 1853. The sixth plate is not lettered, though it has Landseer’s name scratched on the back, and there no proof in the BM.

In the 1970s (or before) the plates came into the hands of the publisher, printing historian and Bewick scholar Iain Bain (1934-2018). Bain printed an edition of 80 copies (75 for sale) of the five etchings issued by Colnaghi and these were offered to subscribers in a portfolio with a brief introduction at £80 plus VAT. Pre-publication subscribers received a bonus of ‘an additional print taken from the back of one of the plates which carries three experimental studies never before published’. A copy of the publication, including the bonus print and the prospectus, is offered here with the plates. The sixth plate, which as noted above is unknown from contemporary or later impressions, is accompanied by a recent impression. 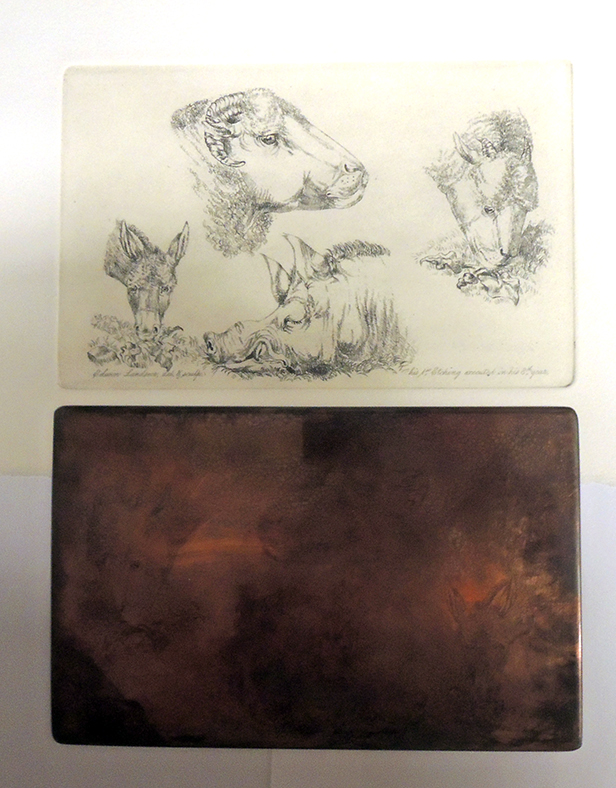 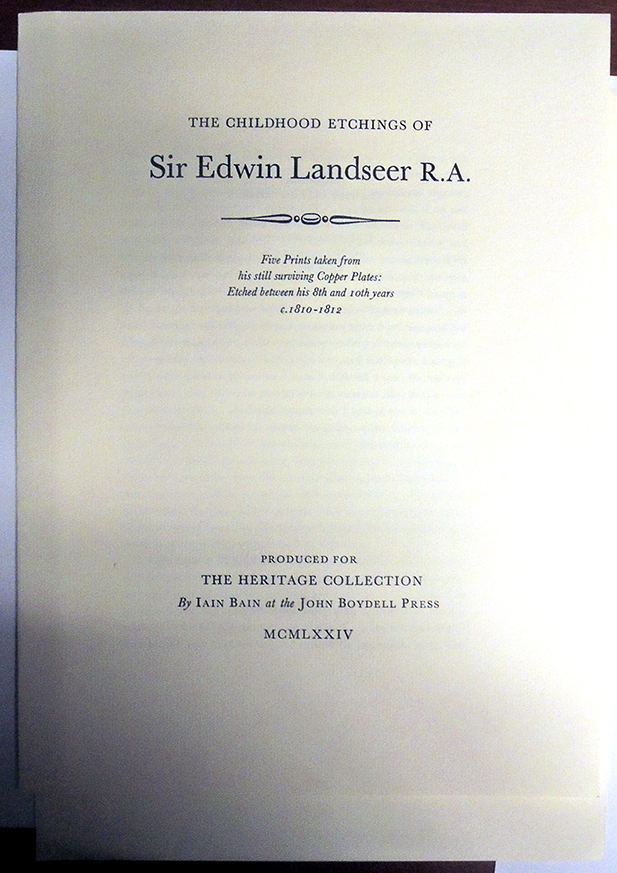 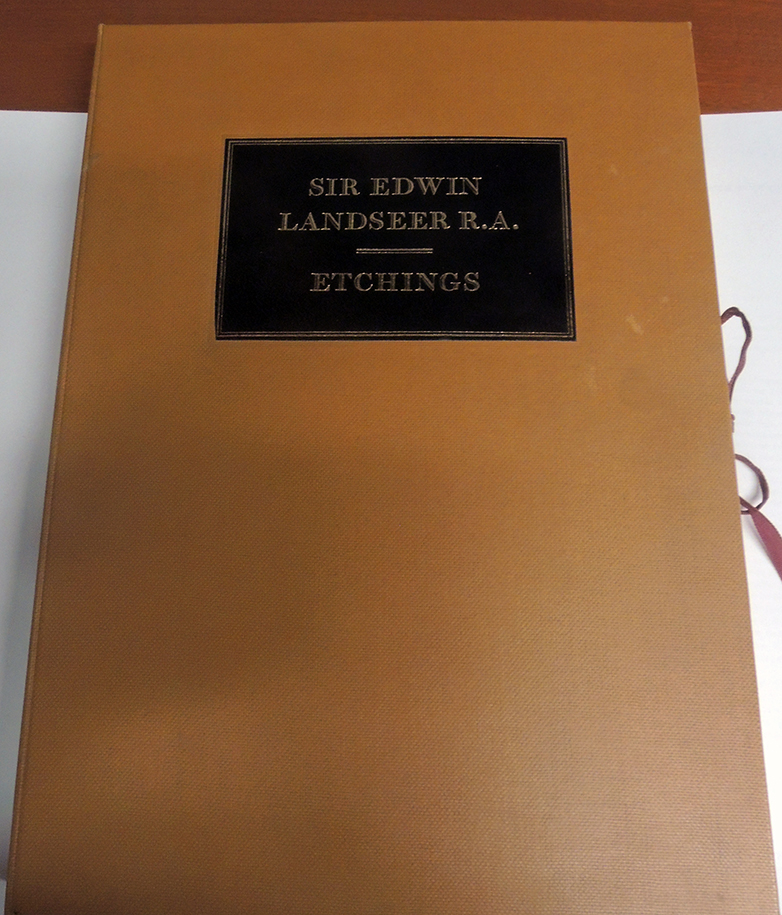 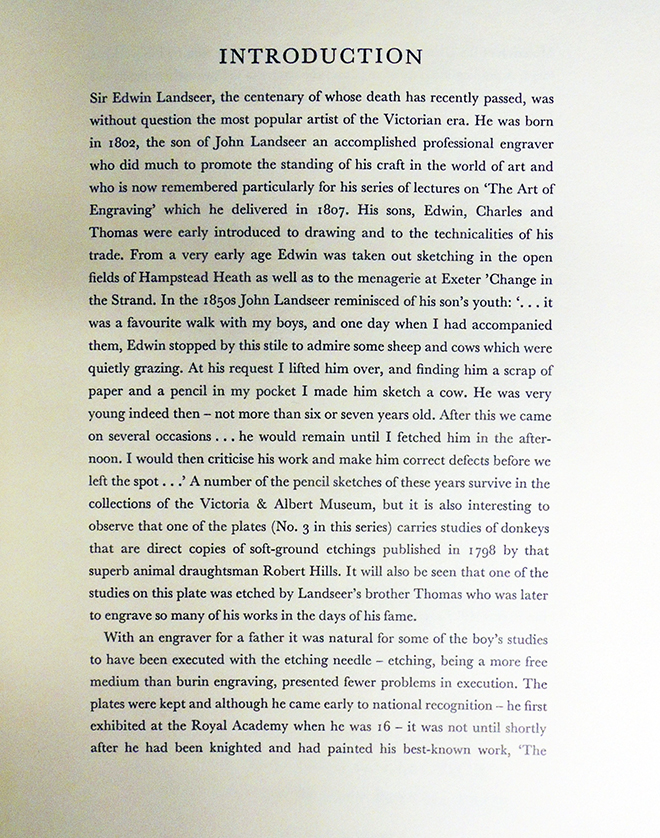 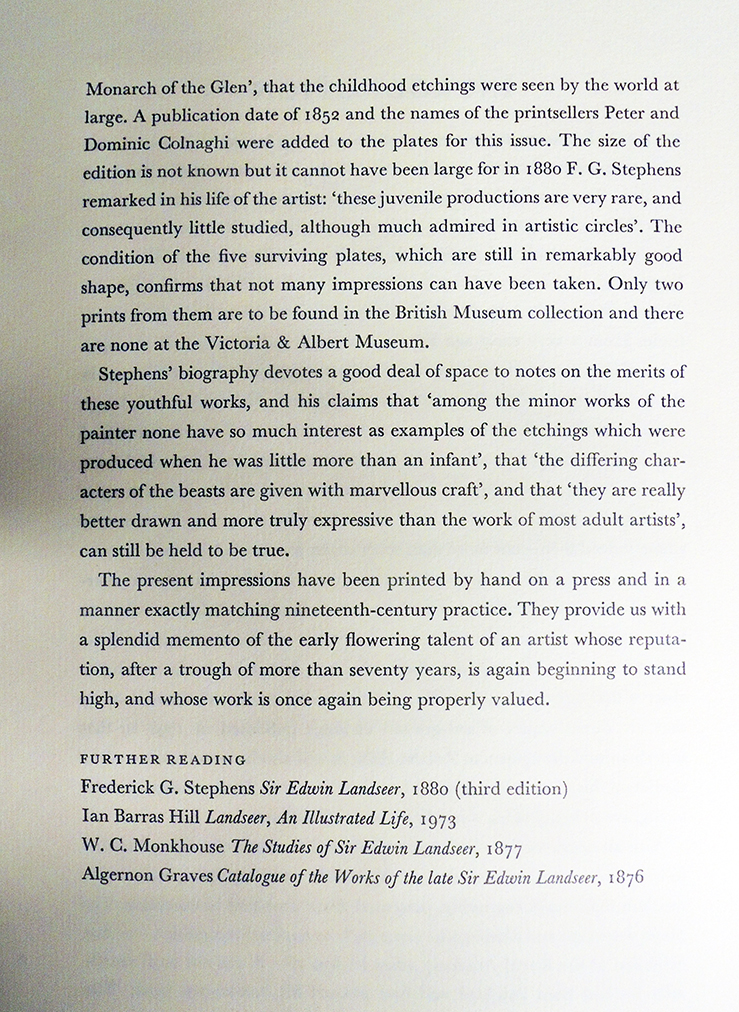 Edwin Henry Landseer (1802–1873). Six etched copper plates, 1810–1812 (legends and imprint lines were added to five plates in 1852) [with]  Iain Bain, The childhood etchings of Sir Edwin Landseer, R.A. Five prints taken from his still surviving copper plates: etched between his 8th and 10th years c. 1810–1812. Produced for The Heritage Collection by Iain Bain at the John Boydell Press MCMLXXIV. (Bristol: The Heritage collection, 1974.) 6 prints in the original buckram portfolio. Together with the prospectus, also dated 1974, five 1974 re-strikes of the plates and a new impression of the unrecorded sixth plate. Graphic Arts Collection GAX 2020- in process. 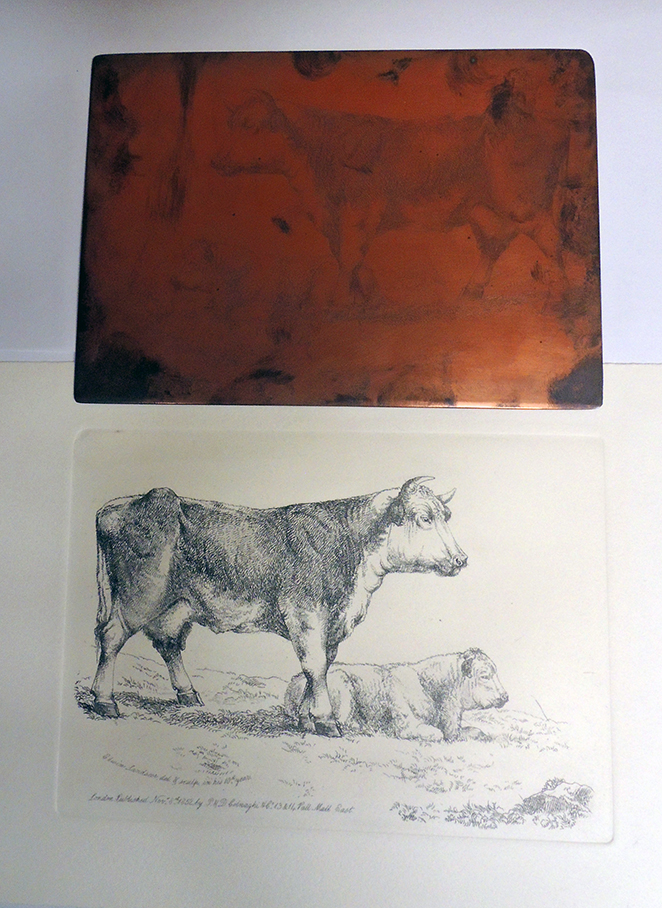