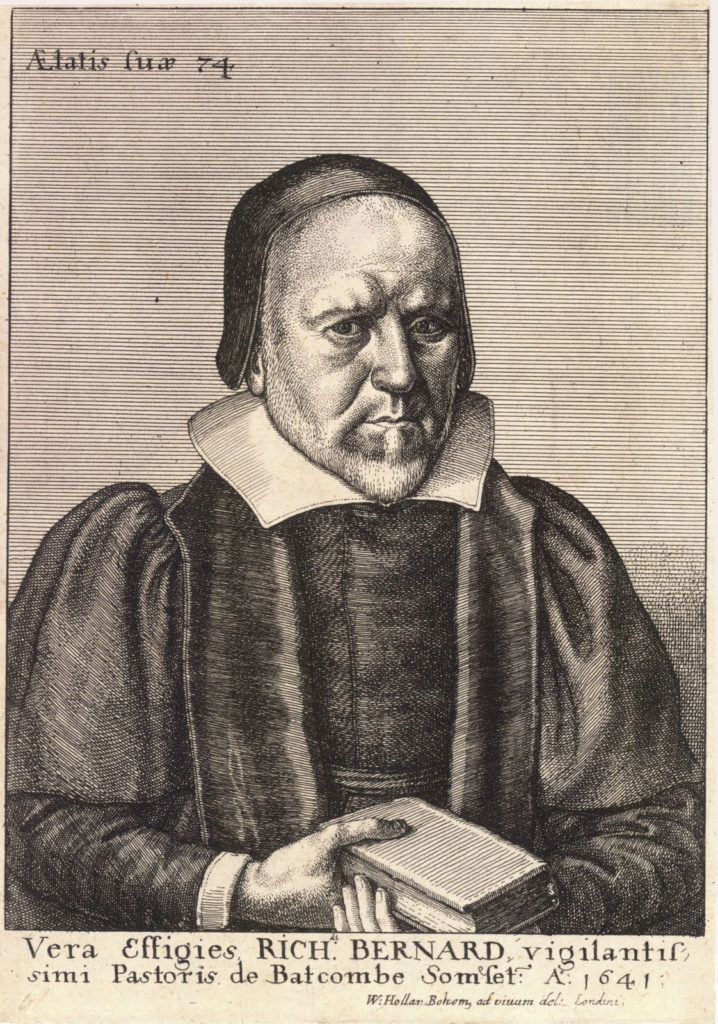 Reading 17th-century English books online can be difficult, even when they are available on a 21st-century tablet. A good example is Richard Bernard’s best-selling allegory The isle of man: or, The legall proceeding in Man-shire against sinne. Wherein, by way of a continued allegorie, the chiefe malefactors disturbing both church and commonwealth, are detected and attached; with their arraignement, and iudiciall tryall, according to the laws of England. A necessarie direction for waifaring Christians, not acquainted with those perillous wayes they must passe, before they happily arriue at their wished hauen (London: Printed for Edw. Blackmore, at the great South doore of Pauls., 1626).

The English Puritan clergyman and writer Richard Bernard (1568–1641) was educated at Christ’s College, Cambridge, receiving MA in 1598. His most popular book, The Isle of Man (1626) reached its sixteenth edition in 1683. According to the DNB, some commentators have suggested that this allegory influenced John Bunyan, particularly his trial scene in The Holy War. 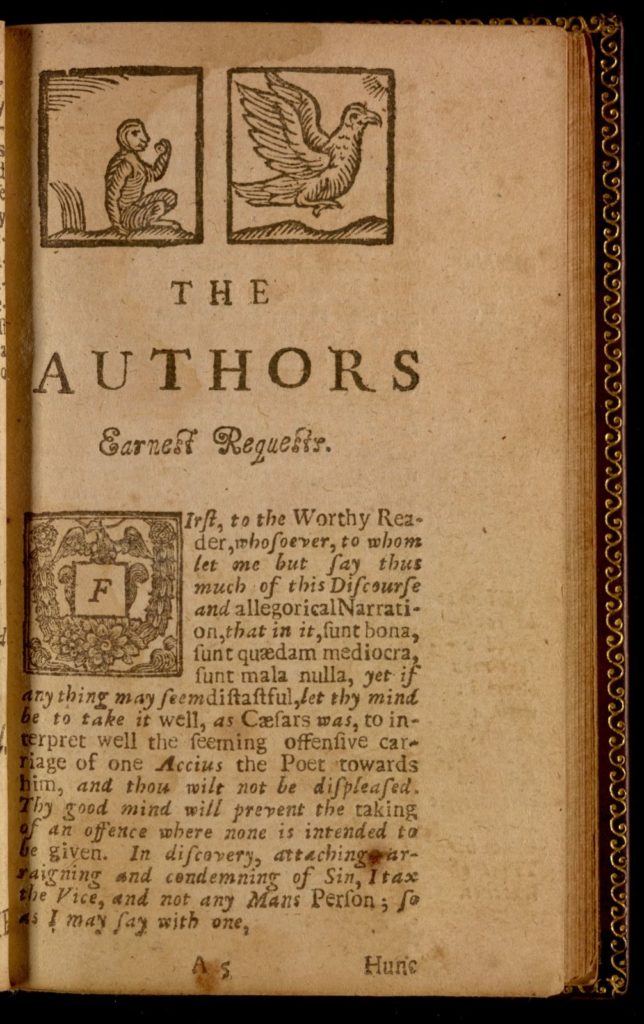 Written in two parts, Bernard first describes the searching, the attaching, and imprisoning of Sin (and its relationship with witches). The second part is the trial of Sin. Google books and Hathi Trust have both loaded copies of Isle of Man, and the University of Michigan offers a transcribed plain text version here:

“THE AVTHORS earnest requests. FIRST, to the Worthy Reader, whosoeuer, to whom let me but say thus much of this Discourse and allegorical narration; that in it sunt bona, sunt quaedam mediocria, sunt mala nulla: Yet if any thing may seeme distastfull, let thy minde be to take it well, as Caesars was, to interpret well the seeming offensiue carriage of one Accius the Poet towards him, and thou wilt not be displeased. Thy good minde will preuent the taking of an offence, where none is intended to be giuen. In discouery, attaching, arraigning and condemning of finne, I tax the Vice, and not any mans person: so as I may say with one,
Hunc seruare modum no∣stri nouere libelli,
Parcere personis, discere de vitijs.
Thou hast heere towards the end of this discourse, the tryall and iudgement vpon foure no∣torious Malefactors. Two of them the very prime Authors of all the open rebellion, or se∣cret * Conspiracies, which at any time euer were in that land: The other two were the principall Abettours and the chiefest Supporters of them. Their names, their natures, and their mischieuous practices, thou mayest find at large in the narration.”
Note: Sunt bona, sunt quaedam mediocria, sunt mala nulla = Some are good, some but middling, and a decided majority bad.

Some online books can be converted to plain text but that can be even more difficult, as in this 1628 is in google books: 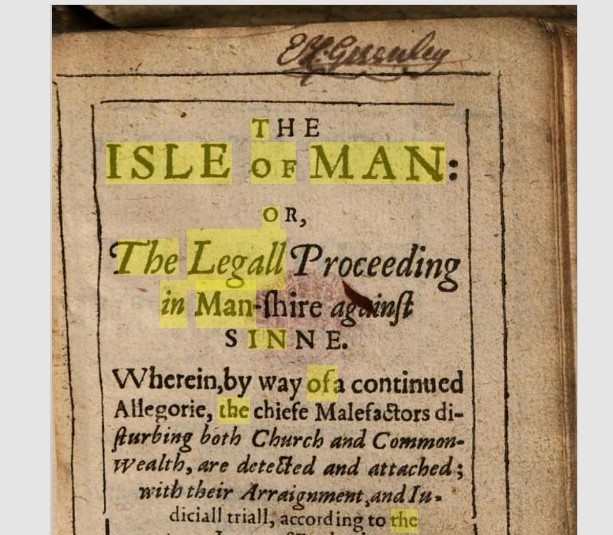 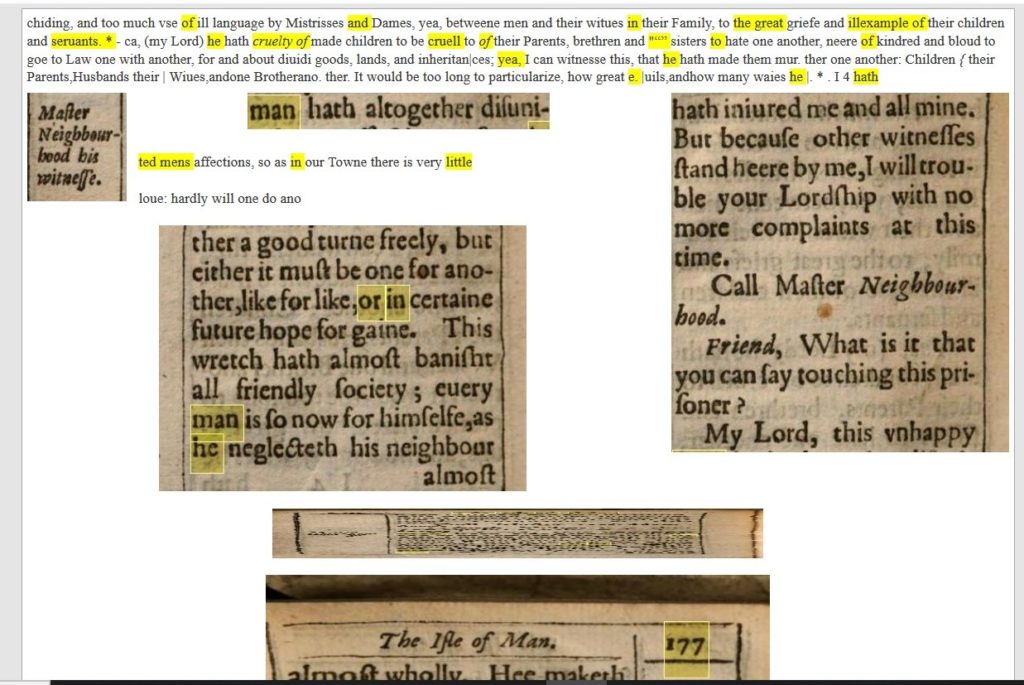 Although most sources list 1626 or 1627 as the date of the first edition, this google book shows an early, possibly misprinted copy dated 1617 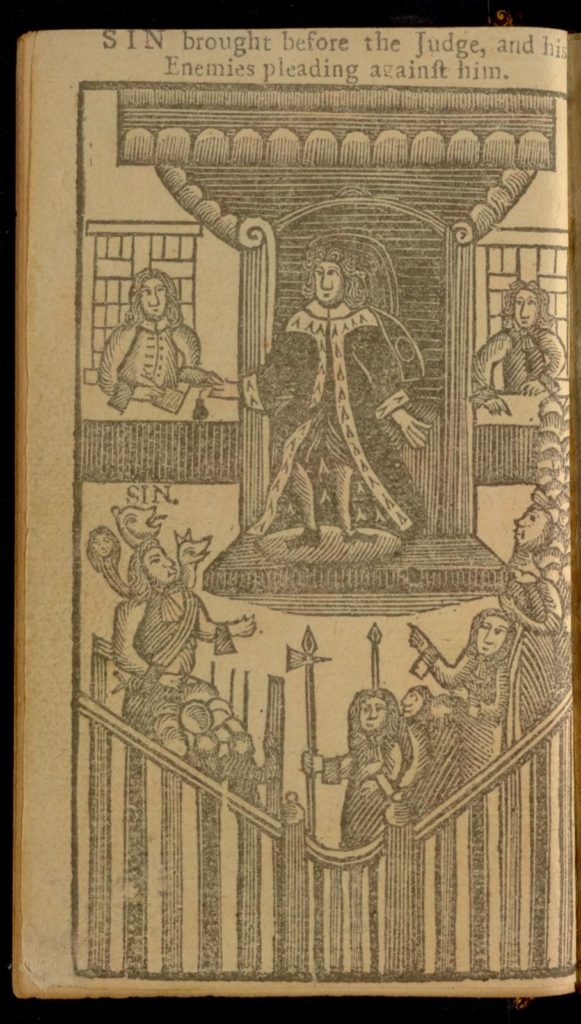 James Franklin (1697-1735), older brother of Benjamin Franklin and founder of the New England Courant; the second newspaper in America, chose Bernard’s text to reprint in 1719. He used a small format, approximately 5 inches high, that could easily be carried in your pocket and read throughout the day. We have digitized this Boston edition:

Richard Bernard (1568-1641), The Isle of Man, or, The legal proceeding in Man-Shire against sin Wherein, by way of a continued allegory, the chief malefactors disturbing both church and commonwealth, are detected and attached; with their arraignment and judicial tryal, according to the laws of England. To which is added, the contents of the book for spiritual use; with an apology for the manner of handling, most necessary to be first read, for direction in the right use of the allegory throughout by Richard Bernard, Rector of Batcomb in Somersetshire. Sixteenth edition (Boston: Reprinted by J. Franklin, for B. Eliot, 1719). Graphic Arts Collection, Hamilton 13s

Not only did Franklin print and publish this edition, he also designed the woodcut frontispiece [above] for the volume, along with small cuts throughout. See Sinclair Hamilton’s American Illustrated Books, (1968 ed.), no. 13. Here are a few more pages. The entire volume can be read at Identifier:http://arks.princeton.edu/ark:/88435/pz50h088r 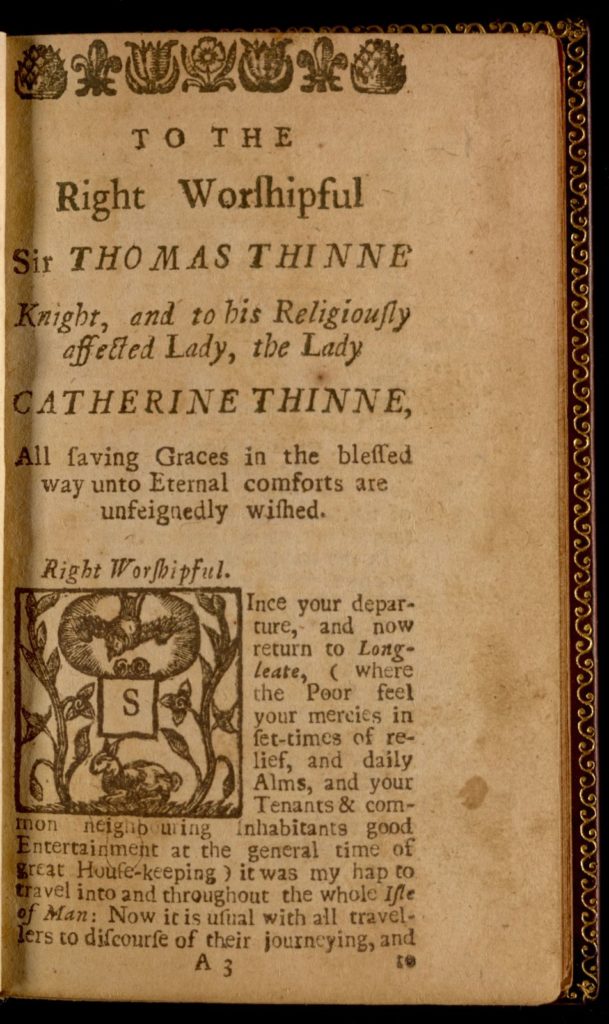 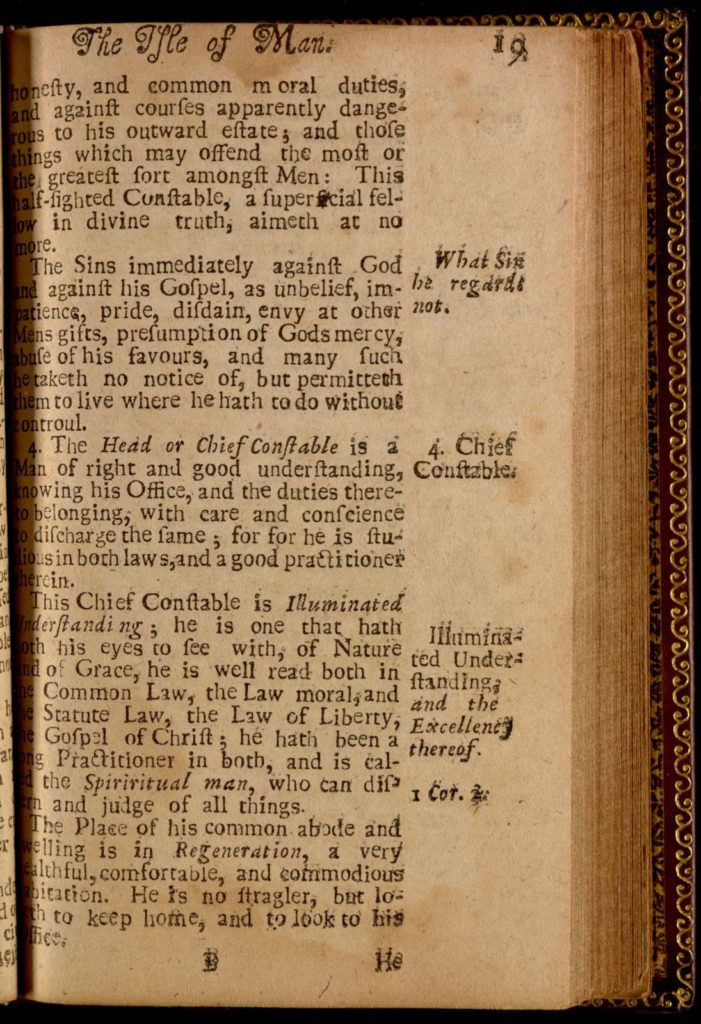 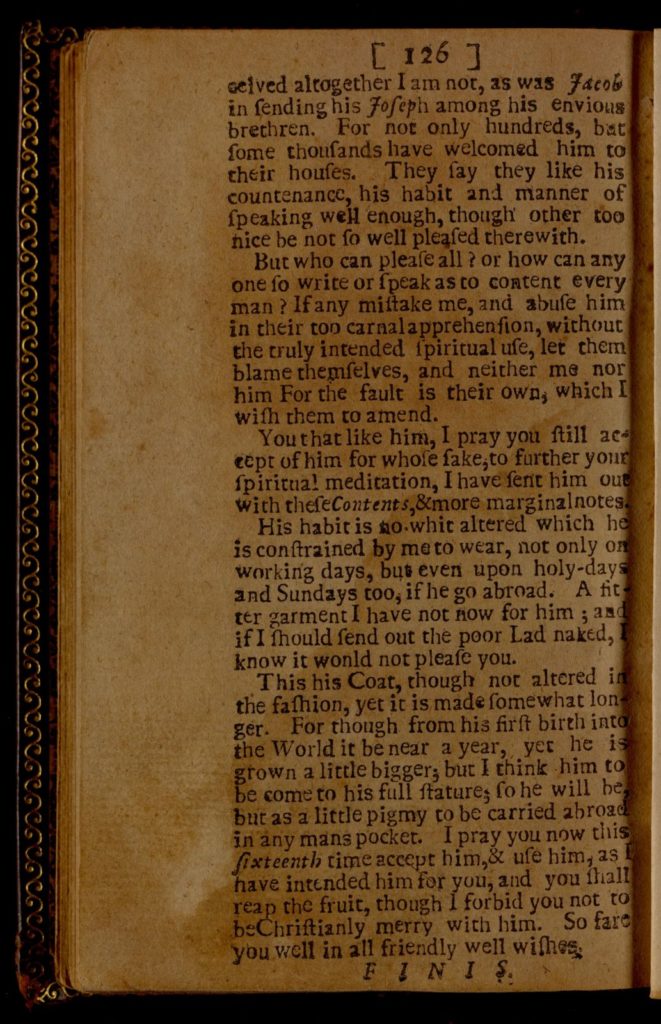 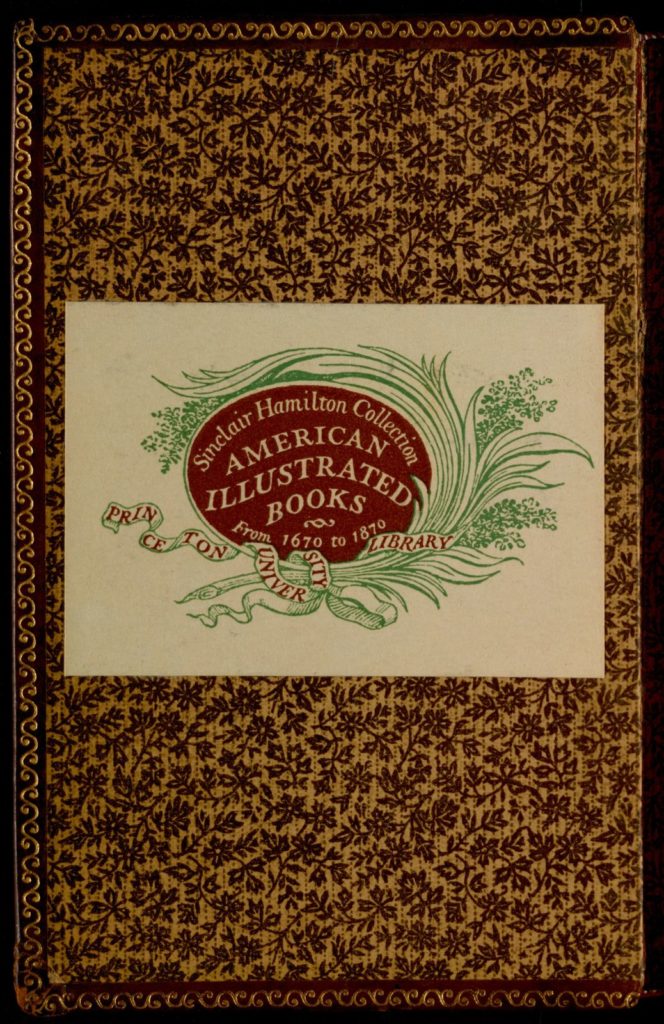 1 thought on “The legall proceeding in Man-shire against sinne”