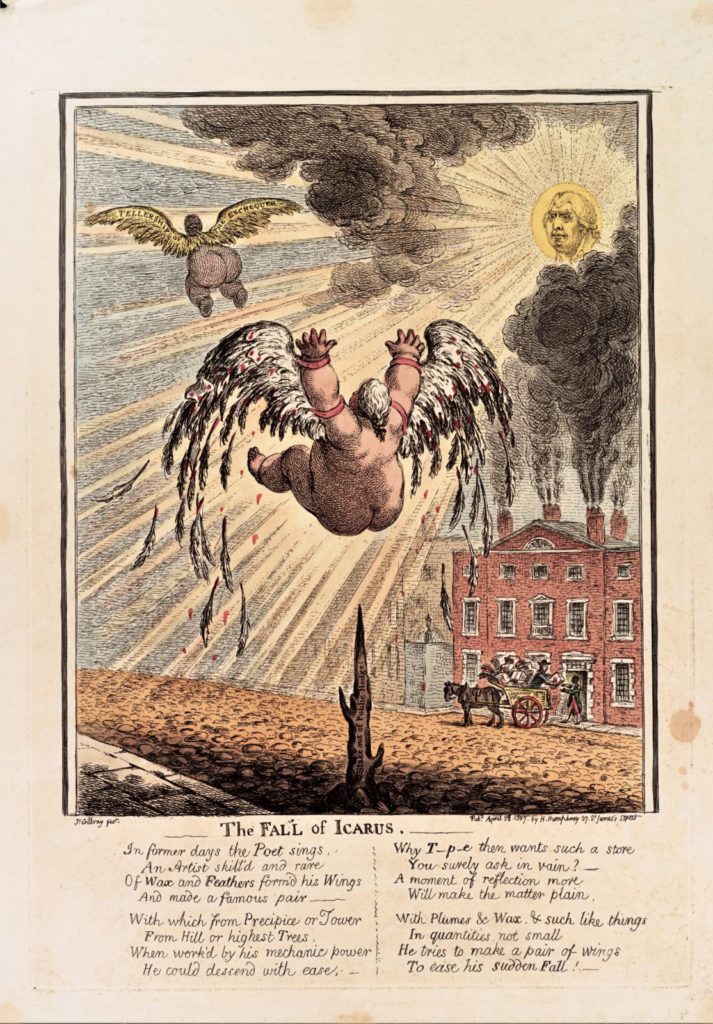 Have you ever taken a pad of paper or an extra pen from your office? When Lord Temple, later Buckingham*, left office in 1807, he was accused of taking with him large quantities of stationery. What might be a minor infraction was highlighted and repeated by caricaturists over many years so whenever you saw a picture of Buckingham, he was usually carrying a hoard of paper and pens.

In the print above, The Fall of Icarus, we see Lord Temple, winged and naked, attempting to fly after his father but like Icarus, his wings are disintegrating. The dropping feathers are shaped like quill pens and splattered with red sealing wax. We anticipate him landing on a stake of public opinion, inscribed “Stake out of Public-Hedge!” George III, as the sun, is looking severely down at Temple, causing the wax of Temple’s wings to melt. In the lower right, a servant hands off packages inscribed ‘Stationary Office’, with paper and bundles of pens. 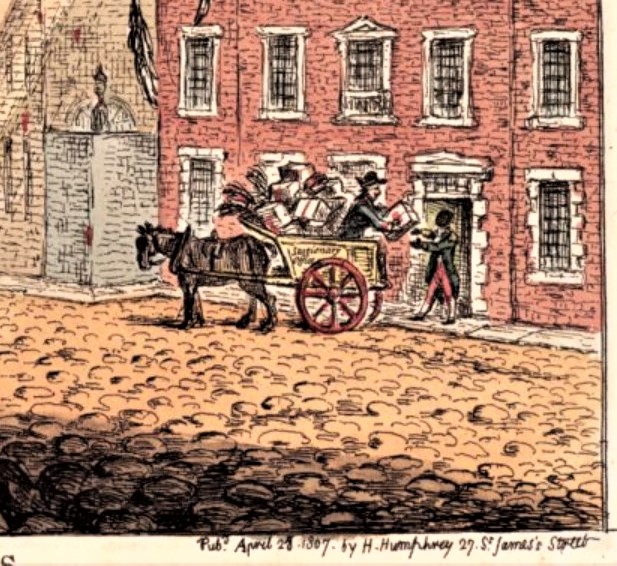 ‘In former days the Poet sings,
An Artist skill’d and rare
Of Wax and Feathers form’d his Wings
And made a famous pair –
With which from Precipice or Tower
From Hill or highest Trees,
When work’d by his mechanic power
He could descend with ease, –
Why T-p-e then wants such a store
You surely ask in vain? –
A moment of reflection more
Will make the matter plain,
With Plumes & Wax, & such like things
In quantities not small
He tries to make a pair of Wings
To ease his sudden Fall! – ‘ 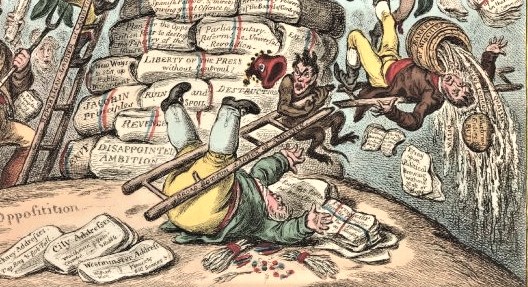 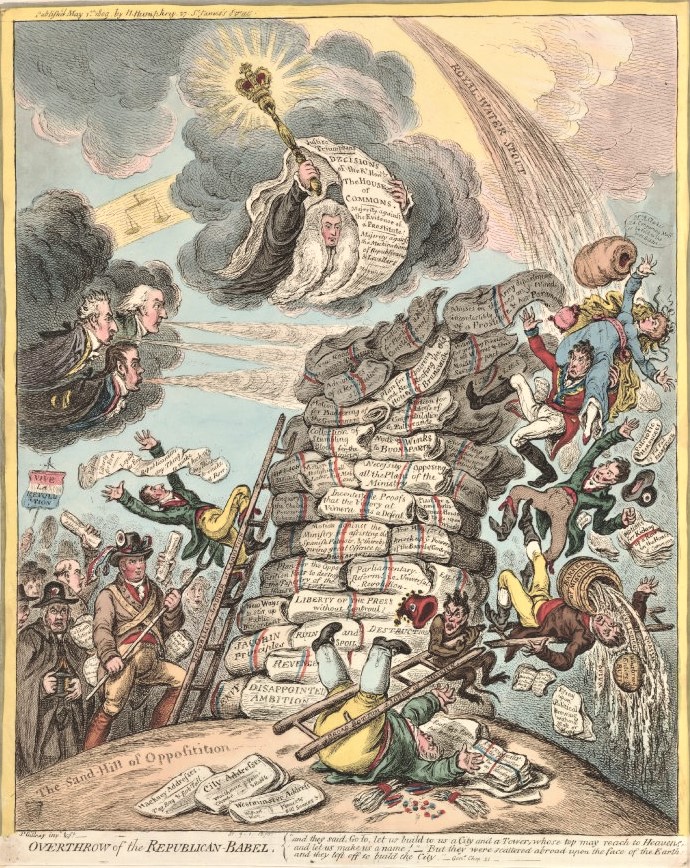 The Tower of Babel is here represented by bundles of documents tied by tricolour ribbon, culminating in the allegations of Mrs. Clarke against the Duke of York. …The ladder is the Broad-Bottom Ladder of Ambition [coalition formed between Charles James Fox and Lord North]. Temple has broken the lower rungs and lies on his back, his legs in the air. He has dropped large stacks of Foolscap [what we call legal size] paper for Broad Bottom and Stationary from the Paymasters For Attacks on Ministry, with pens, sealing-wax, … Dorothy George adds: “Temple did not belong to the extreme wing of the Whigs, represented by Whitbread and Folkestone, though he was a supporter of Wardle. His presence may be due to the canard about his pilfering of stationery…” 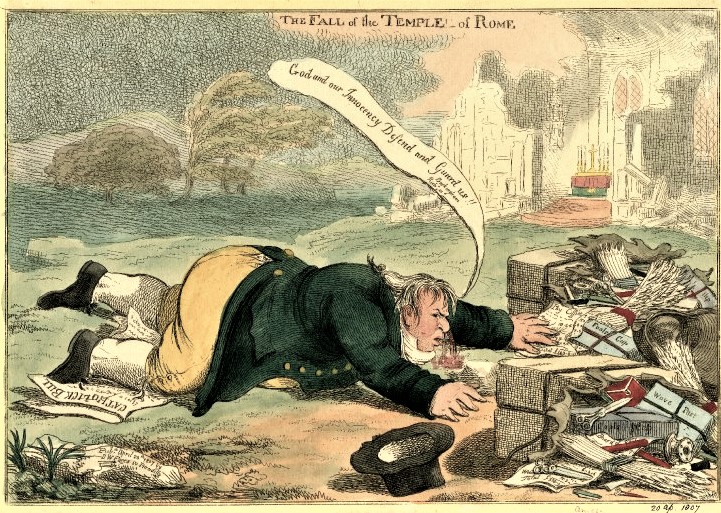 Here we see Lord Temple with a bloody nose, scrambling to collect the bales of stationery, pens, sealing wax, scissors, ink pots and other writing materials he dropped. He says; “God and Innocency Defend and Guard us!!”– Buckingham Richd. III. 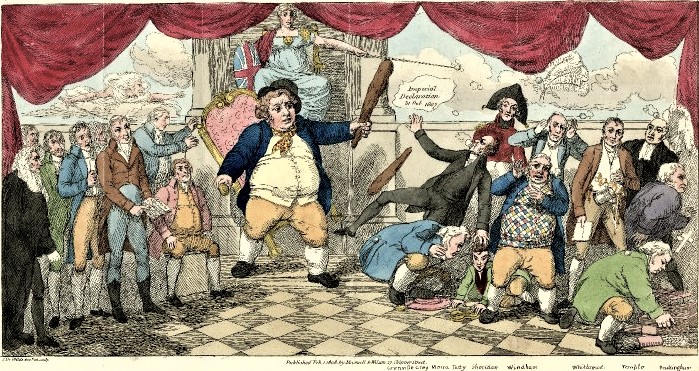 John Bull (George III), has risen from his chair of state to overthrow Grenville’s Ministry, while the new Ministers are grouped on the left Behind and above him, Britannia sits enthroned, flanked by pillars; she holds her shield and angrily points with her staff at the ex-Ministers, who are also assailed by missiles. …. In the foreground on the extreme right. Temple crouches over a pile of stationery and pens. 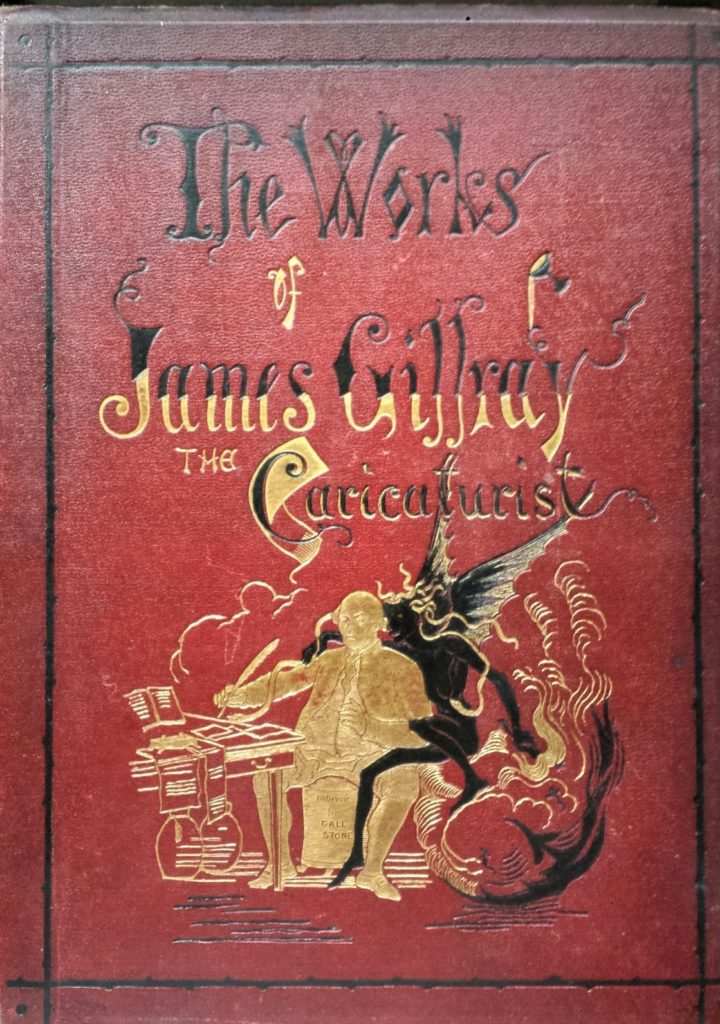 By the way, if you look closely at the Gillray print “The Fall of Icarus” at the top, you will notice that the date at the bottom is slightly smeared. For many years, the main sources of information about Gillray listed it as April 28, 1807 but contemporary research has corrected that to read April 20, 1807.

The Works of James Gillray, the Caricaturist: with the story of his life and times / edited by Thomas Wright, Esq., M.A. F.S.A. (London: Chatto and Windus, [1873]). Graphic Arts Collection Oversize Rowlandson 989.2q