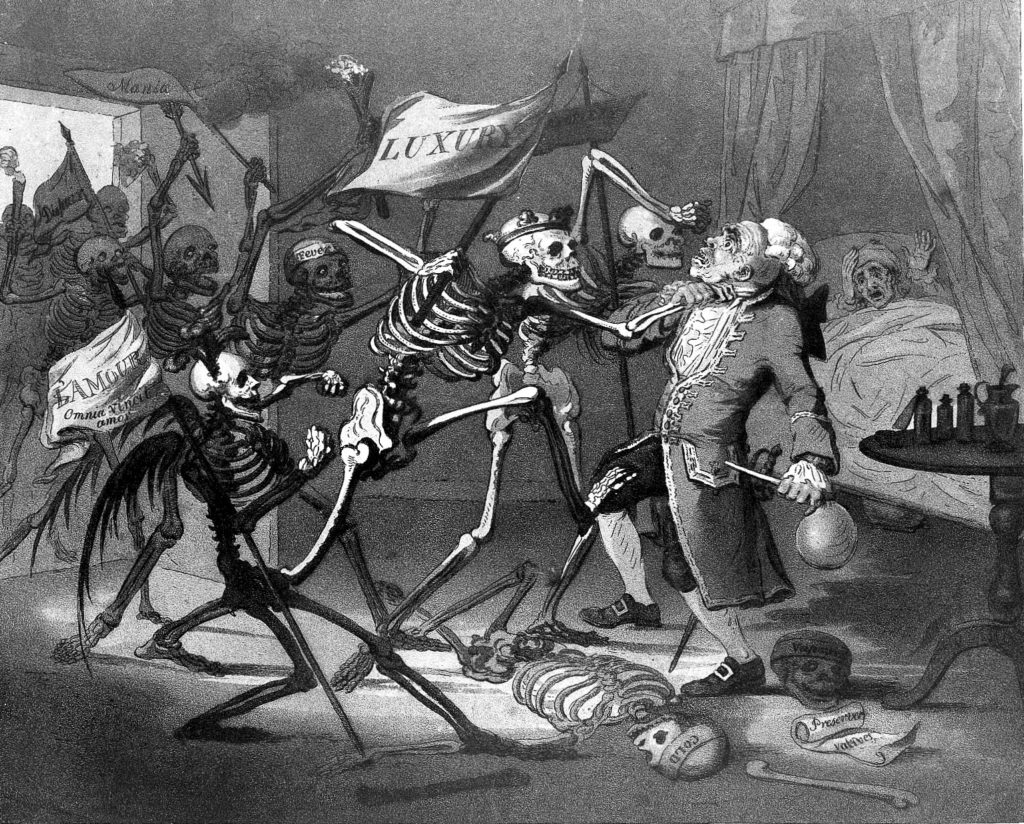 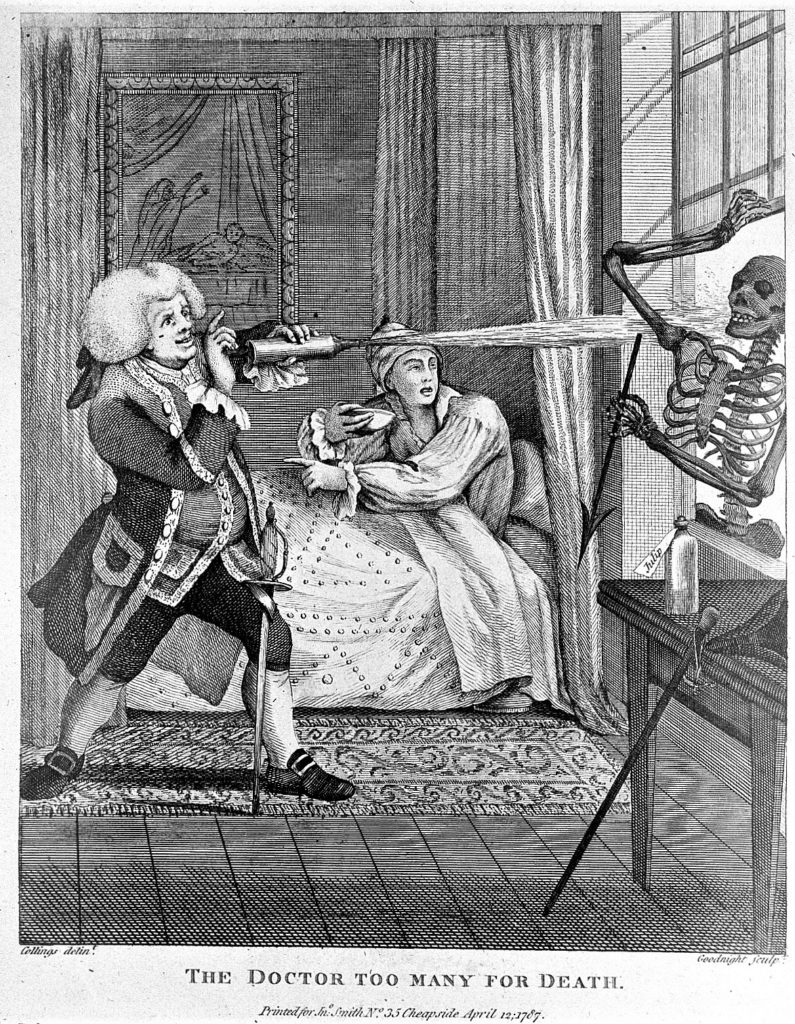 Walker’s Hibernian Magazine, or Compendium of Entertaining Knowledge, published in Dublin monthly from February 1771 to July 1812 is available at Princeton University Library by interlibrary loan, microfilm, and Hathi Trust digital images. Unfortunately, the prints bound into each issue digitized by the New York Public Library were never unfolded and so, only the text is available.

A rare sequence of two drawings by Samuel Collings were etched by Thomas Rowlandson for the December 1, 1788 and January 1, 1789 issues of the Hibernian but it is difficult to know how they relate to the few extent loose prints. In the first plate [left], a doctor at a sick man’s bedside fires a full syringe or clyster or enema into the face of Death represented as a skeleton. 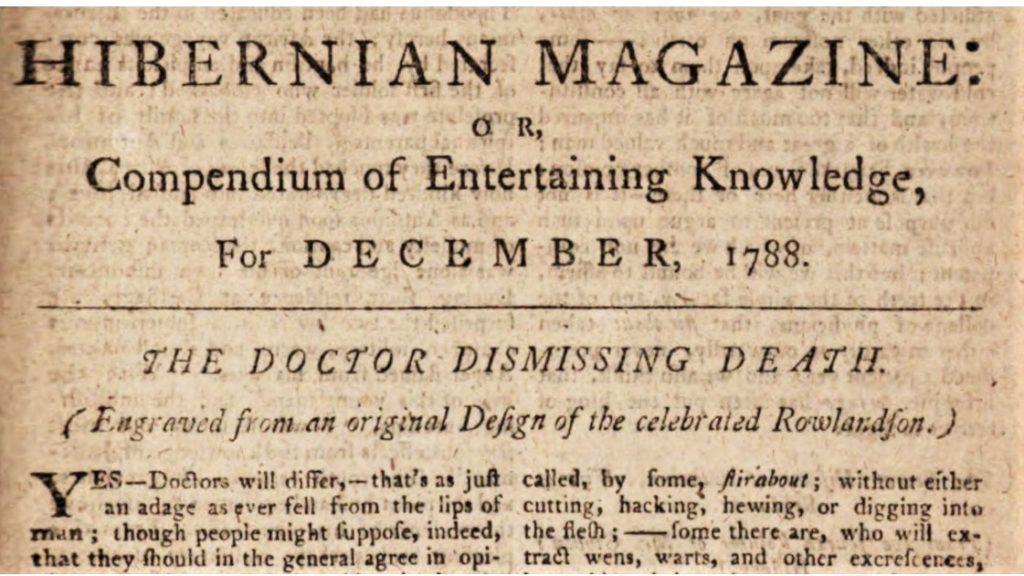 Hibernian Magazine: or Compendium of Entertaining Knowledge, for December 1788. The Doctor Dismissing Death. (Engraved from an original Design of the celebrated Rowlandson). Yes—Doctors will differ,–that’s as just an adage as ever fell from the lips of man; though people might suppose, indeed, that they should in the general agree in opinion; yet the contrary is evident in the various modes of cure used every day by the faculty; –and it is but just it should be so, as we shall prove by experience. Had inoculation never been brought into repute, and the improvement on it too by Lady Wortley Montague, Dimmesdale, or Sutton. (for people might as well have taken it naturally, and died a natural death at once, as to die by an infection poured copiously into an aperture dug in the flesh for the purpose of containing it, after the poor patient had been almost starved to death) what an abominable ugly set of animals would most of us be at this time; seamed, blind, disfigured, and featureless…

Two earlier impressions, 1786 and 1787, were etched by N.C. Goodnight for John Smith, 35 Cheapside, with the slightly different title but assumed to be the same image, given the elaborate description in the December issue. Thomas Rowlandson was commissioned to re-engrave Collings’ drawing in 1788 and presumably also 1789.

In the second plate, the Doctor is overwhelmed by death as a group of skeletons, variously labeled “Luxury,” “Apoplexy,” “Fever,” “L’Amour Omnia Vincit Amor,” “Mania,” “Despair,” “Cold,” and “Vapour.” Attributed to Thomas Rowlandson (1757–1827) after Samuel Collings (active 1784-89, died 1810), Death Too Many For the Doctor. Frontispiece: Hibernian Magazine: or Compendium of Entertaining Knowledge, January 1789. Etching. 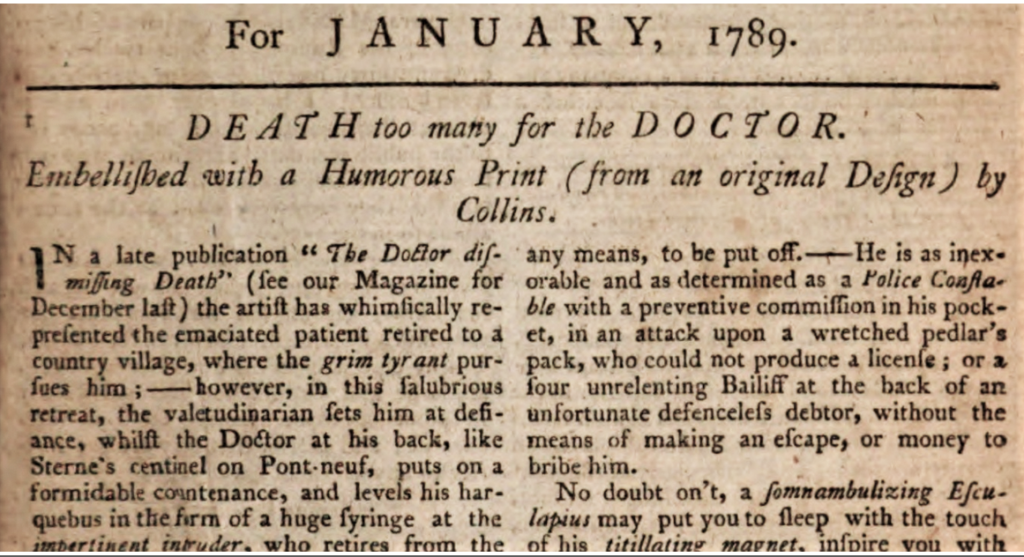 Death too many for the Doctor. Embellished with a humorous print (from an original design) by Collins [sic]. In a late publication “The Doctor dismissing death” (see our Magazine for December last) the artist has whimsically represented the emaciated patient retired to a country village, where the grim tyrant pursues him; –however, in this salubrious retreat, the valetudinarian sets him at defiance, whilst the doctor at his back, like Sterne’s sentinel on Pont-neuf, puts on a formidable countenance, and levels his harquebus in the firm of a huge syringe at the impertinent intruder. Who retires from the window, into which he first peeped, with a sarcastic grin at his medical adversary. In the present scene, however, Death is too many for the Doctor, the patient is represented as returned to his town residence, and forgetful of his late wonderful escape, relapses into his former course of dissipation, in consequence of which, notwithstanding his friend the Doctor (armed with a clyster-pipe, and a magazine of nostrums at his back) has victoriously triumphed over cold and vapours; death attacks him with a host of foes. … 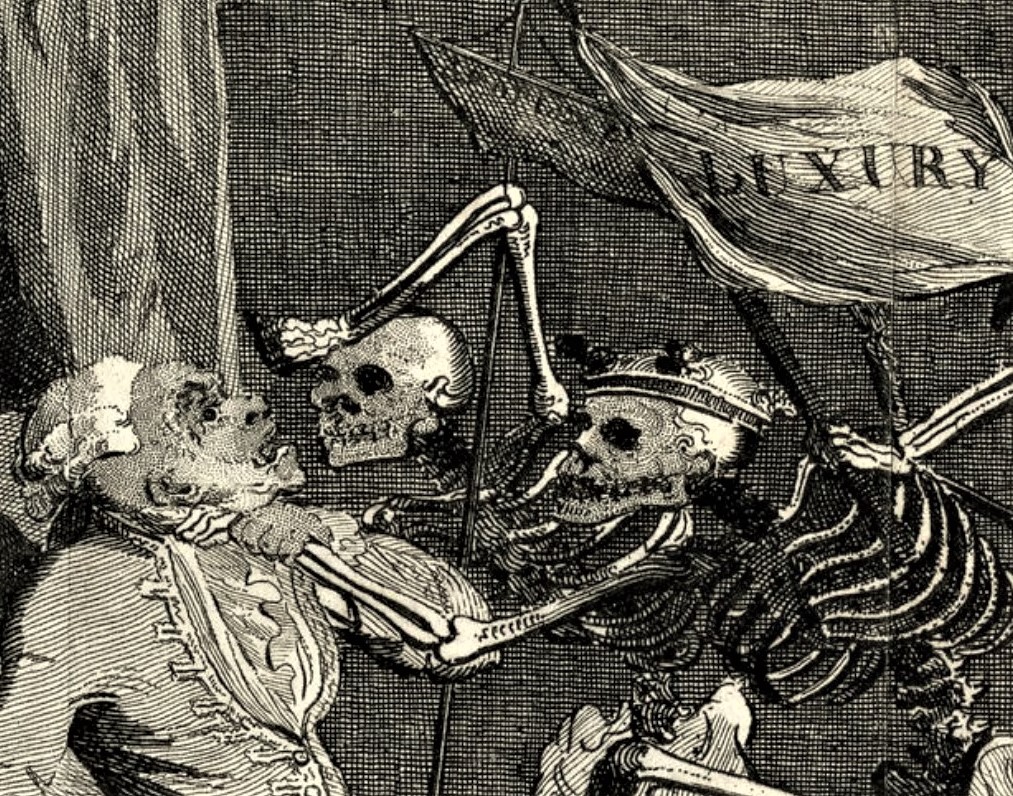 The second print was also aquatinted by Francis Jukes (1747-1812) dated in various collections from 1786 to 1803, each on a mat that might not be contemporary with the print 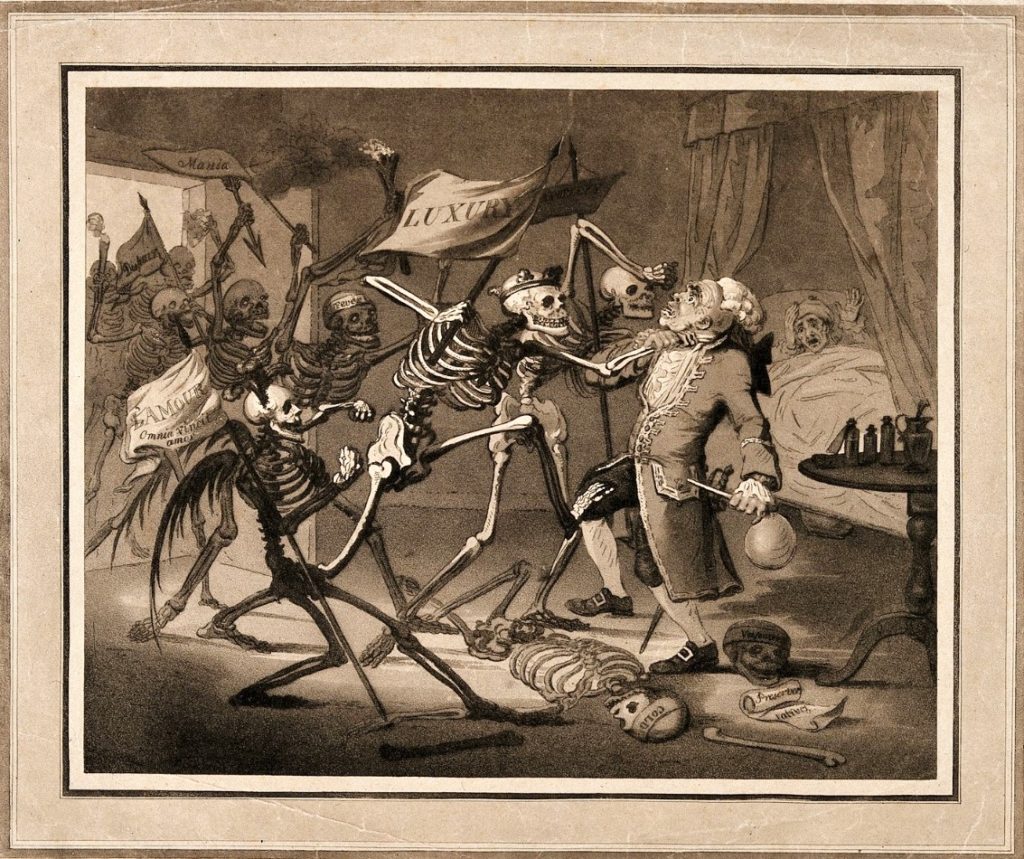