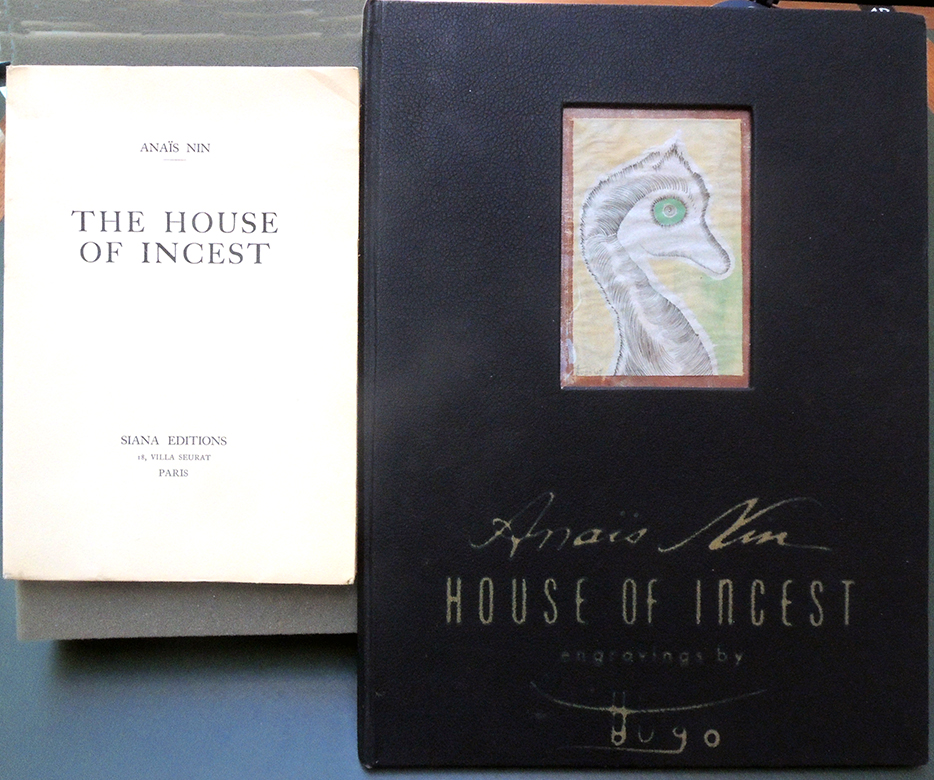 Anaïs Nin (1903-1977) is famous for her diaries but she also wrote a book of surrealist prose poetry titled The House of Incest that was first self-published in Paris under Siana Editions (her name spelled backwards) and in New York with two second editions under her Gemor Press (limited edition shown above). An early inspiration for this book was the 1928 German film Alraune or the 1930 adaptation by Richard Oswald. 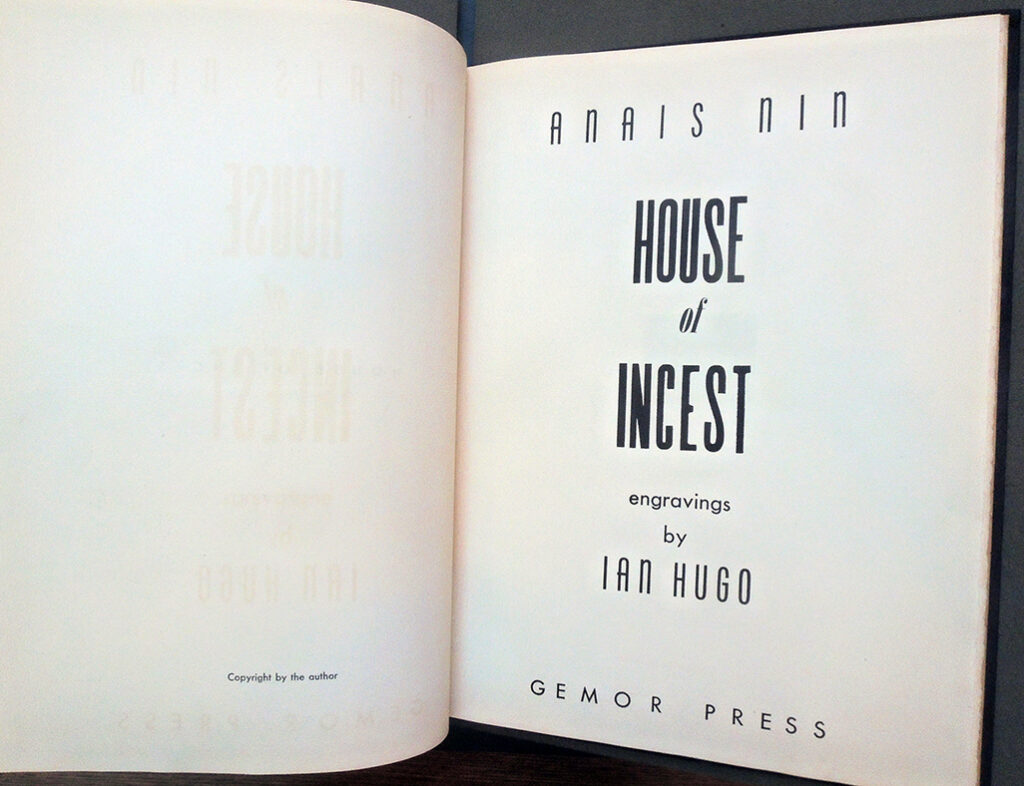 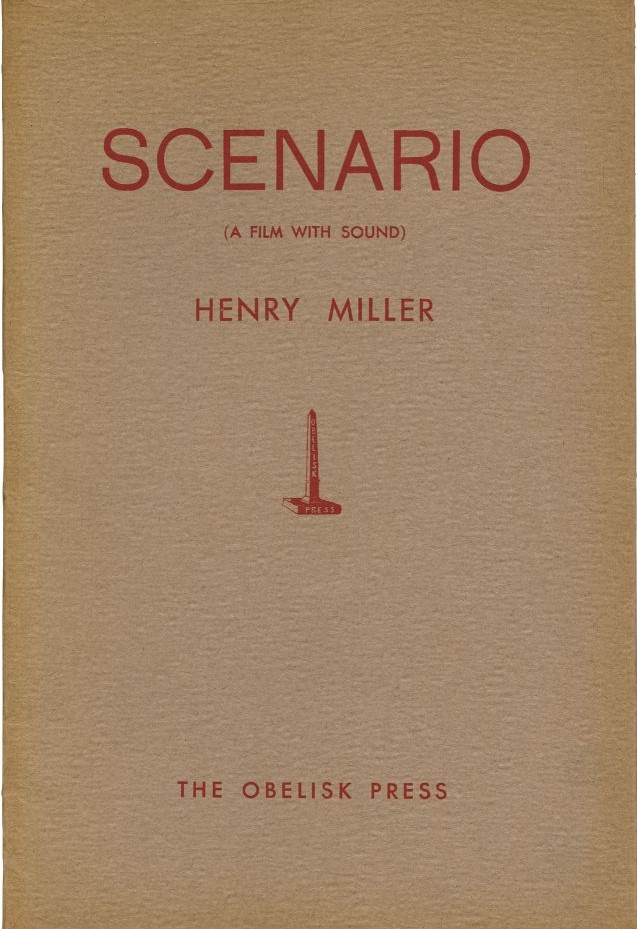 One year after her first edition appeared, her lover Henry Miller wrote his own interpretation of The House of Incest, titled Scenario, self-published under the Obelisk Press imprint in July 1937 in an edition of 200 copies with a frontispiece illustration by Abraham Rattner (an American artist living in Paris).

“I hate Scenario,” wrote Nin, “and I never had the courage to tell Henry. It is the worst and basest product of our association and collaboration. In his hands all my material was changed, the very texture of House of Incest was changed. He wrote Scenario but the ideas were mine, all of them. He only added Henry-like touches; doves coming out of asses, skeletons, noise, and things I don’t like, loud and filmlike, the opposite of House of Incest. He concretized it, it smells of L’Age d’or, Dali paintings, it is absolutely lacking in originality. A monstrous deformed bastard child born of our two styles and a caricature of mine. And worst of all, to me (and I never forgot the day I received it in New York), it revealed how Henry had not penetrated the meaning of House of Incest, could not.”–Nearer the Moon (1996), p. 107. 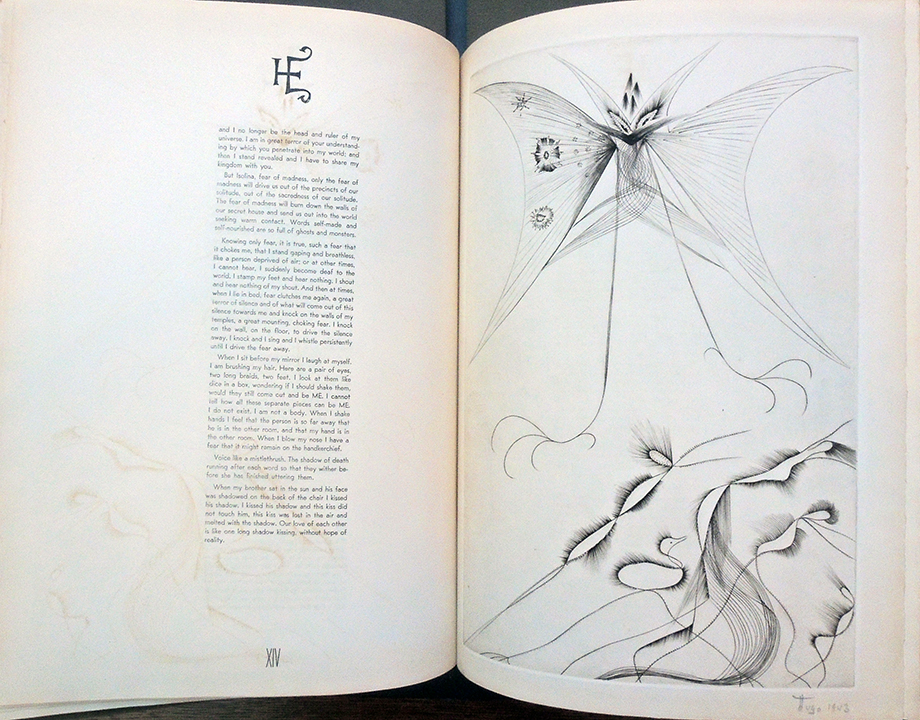 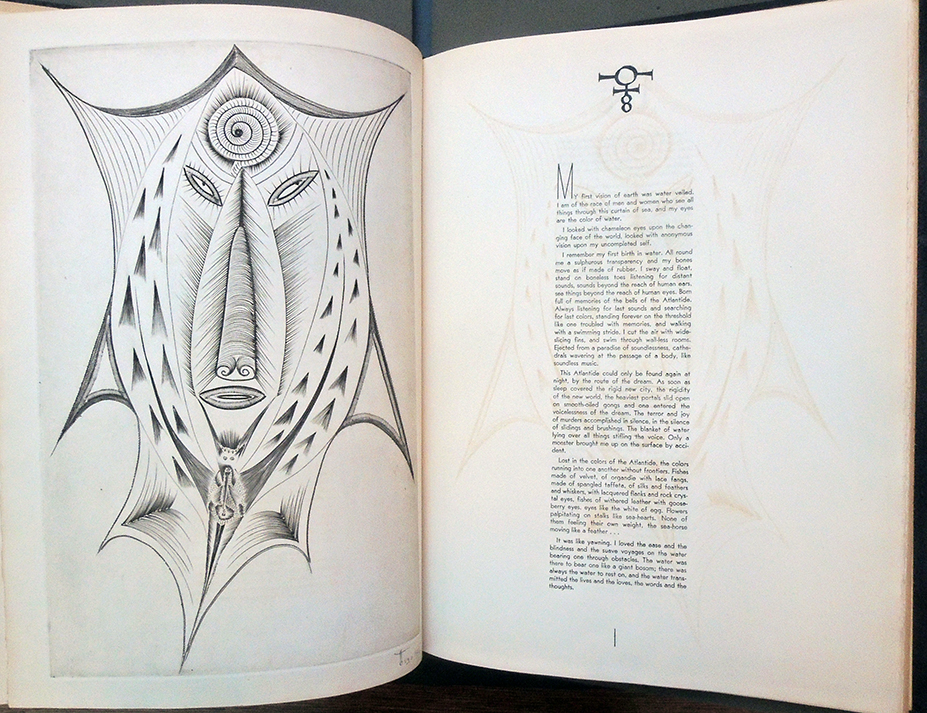 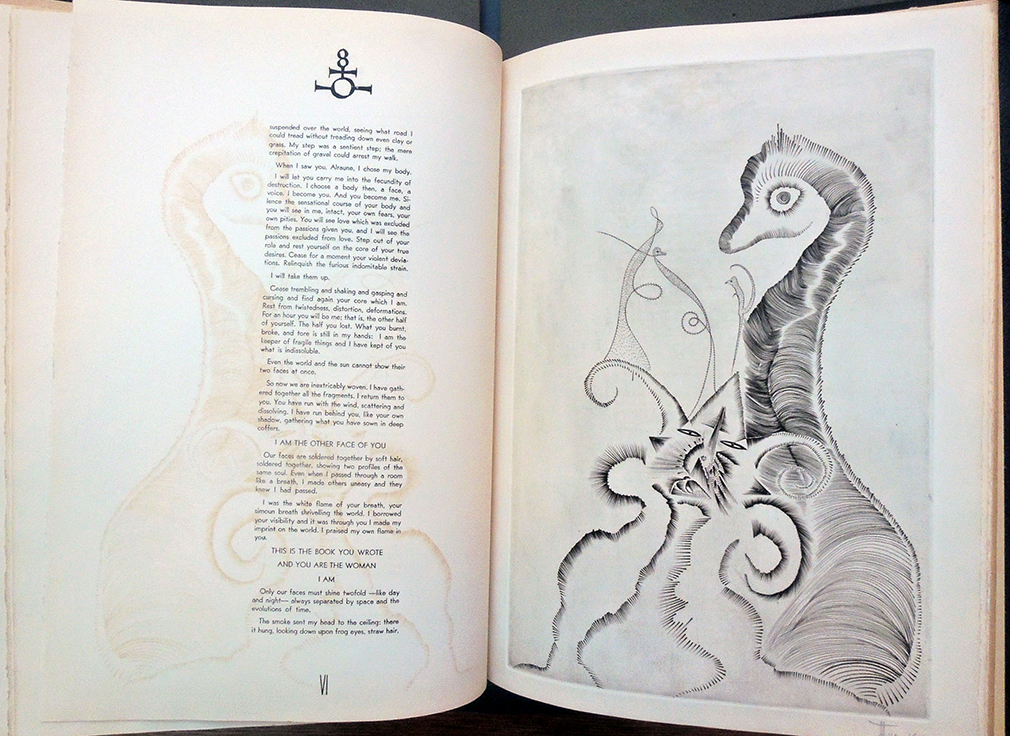 All of Nin’s projects were funded by her husband Hugh Parker Guiler (pen name Ian Hugo, 1898-1985). A banker by trade, Guiler also studied engraving with Stanley William Hayter and printed the images for many of his wife’s books, later branching out into experimental filmmaking. Bells of Atlantis (1952) featured Nin reading from House of Incest, with a soundtrack of electronic music by their friends Louis and Bebe Barron.

Ian Hugo, Bells of Atlantis (New York: Museum of Modern Art, 1952). “Evokes the atmosphere of another life, time and another world which the author identifies with Atlantis. The accompanying images of this “cinematic poem” suggest the mythical drowned kingdom and the aqueous beauty of the lost continent.” Based in part on Anais Nin’s The House of Incest. Director, Ian Hugo, assisted by Len Lye; narrator, Anais Nin; music, Louis and Bebe Barron.

A costume party the following year, “Come as your madness,” inspired Kenneth Anger’s film The Inauguration of the Pleasure Dome, in which Nin appeared as Astarte, the goddess of fertility.

Henry Miller (1891-1980), Scenario: (a film with sound); with a frontispiece by Abraham Rattner (Paris: Obelisk Press, 1937). “This the original edition, published in 1937, is limited to two hundred copies assigned by the author and numbered 1 to 200.” “This scenario is directly inspired by a phantasy called “The House of incest,” written by Anaïs Nin”–3rd prelim. leaf. 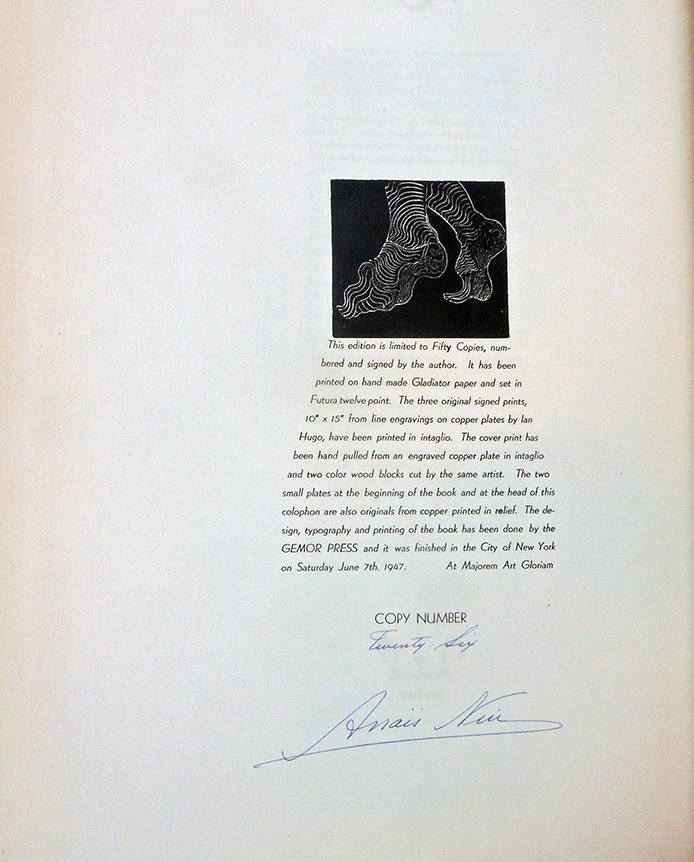 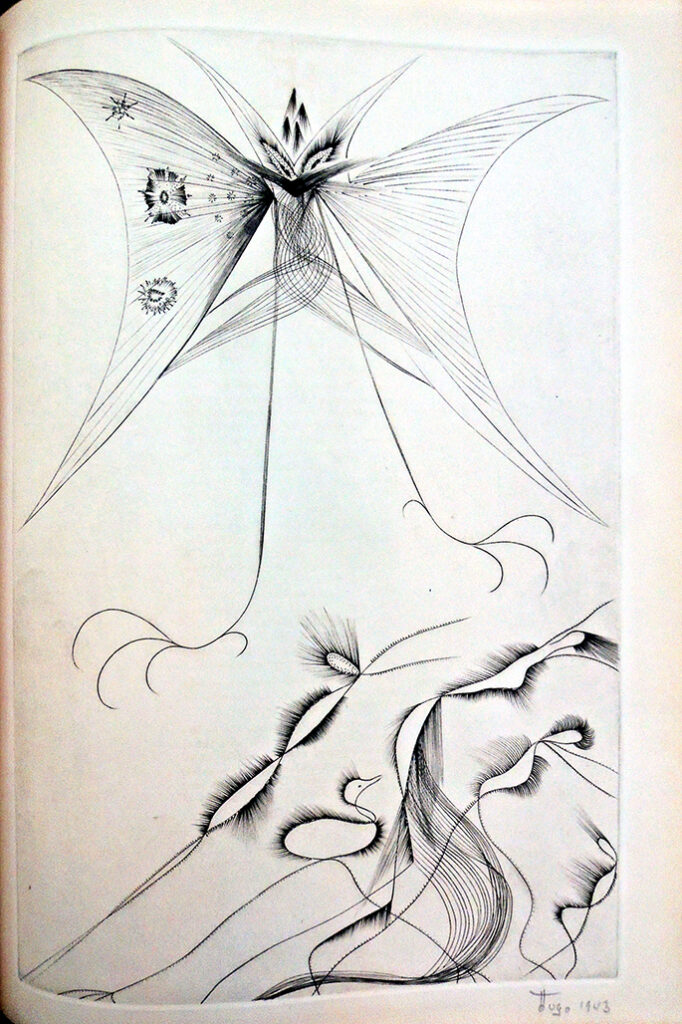