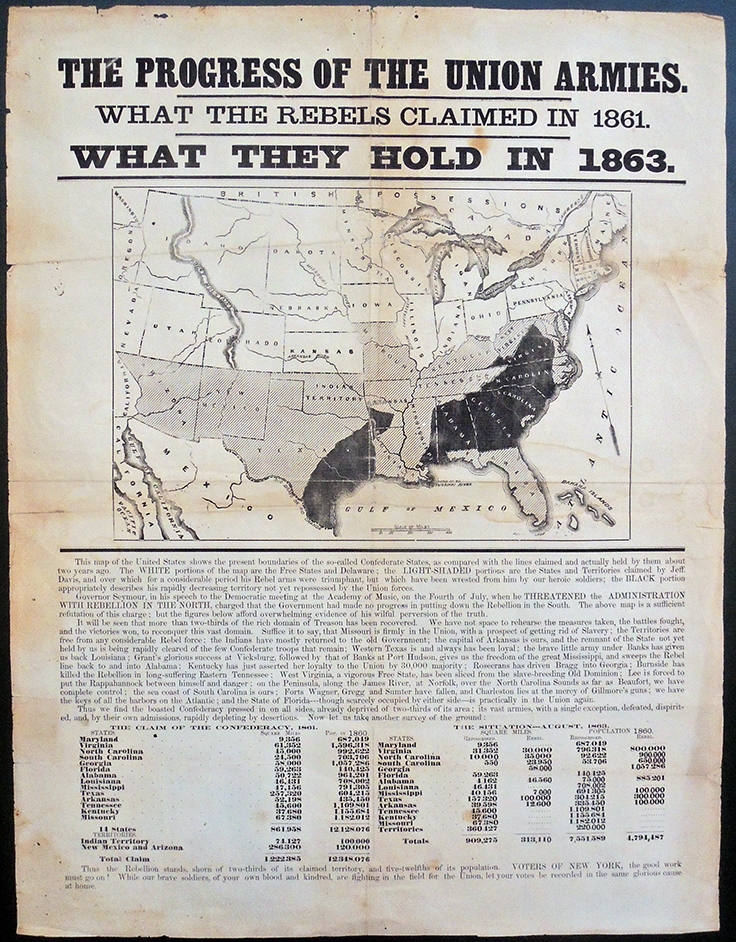 This rare American Civil War broadside is thought to have been published in the late Summer of 1863. To put it in perspective, here’s a brief timeline taken from: https://www.nps.gov/gett/learn/historyculture/civil-war-timeline.htm

January 1, 1863- The Emancipation Proclamation goes into effect. Applauded by many abolitionists including Frederick Douglass, there are others who feel it does not go far enough to totally abolish slavery.

May 18, 1863– Siege of Vicksburg, Mississippi begins. Union forces under General Ulysses S. Grant attack Confederate defenses outside the city on May 19-22. If Vicksburg falls, the Mississippi River will be completely controlled by the Union.

July 1-3– The Battle of Gettysburg, Pennsylvania. The bloodiest battle of the Civil War dashes Robert E. Lee’s hopes for a successful invasion of the North.

July 4– Vicksburg, Mississippi, surrenders to the Union Army under Grant. The capture of Vicksburg gives the Union complete control of the Mississippi River, a vital supply line for the Confederate states in the west. At Gettysburg, Lee begins his retreat to Virginia.

July 13, 1863– Draft Riots begin in New York City and elsewhere as disgruntled workers and laborers, seething over the draft system that seemingly favors the rich, attack the draft office and African American churches. The riots continue through July 16.

Publication of this broadside/election propaganda.

December 8, 1863– Lincoln Issues his Proclamation of Amnesty and Reconstruction, which would pardon those who participated in the “existing rebellion” if they take an oath to the Union.

The broadside’s map of the United States in 1863 shows the “Free States and Delaware” in white, with the partially shaded area indicating “the States and Territories claimed by Jeff. Davis, and over which for a considerable period his Rebel arms were triumphant, but which have been wrested from him by our heroic soldiers.” The darkest area indicates Confederate control. A table contrasts “The Claim of the Confederacy, 1861” with “The Situation—August, 1863.”

Recognized today as a campaign poster for the 1863 New York State elections, the broadside promotes a slanted perspective on the success of the Union army. Susan Schulten observes:

“There were no shortage of war maps for the northern public, but these were unique, recording conflict as a story of territorial control rather than discrete battles. Indeed they were a kind of first draft of history, an attempt to create a story where the outcome was not as yet unknown. Yet in generalization, they imply a steady state of progress and control that was at odds with the chaos on the ground. Again, one thing that strikes me about the use of such imagery is the suggestion of ongoing territorial progress. Such a depiction allows little room to acknowledge the notorious reversals of territorial control in the east. But to boost the flagging spirits in the Union, the image was compelling indeed, supported by extensive statistics of square miles and population under Union control.”– Mapping the Nation  http://www.mappingthenation.com/blog/mapping-the-progress-of-the-union-army/

Compare this map to another clearly labeled as a campaign promotion: 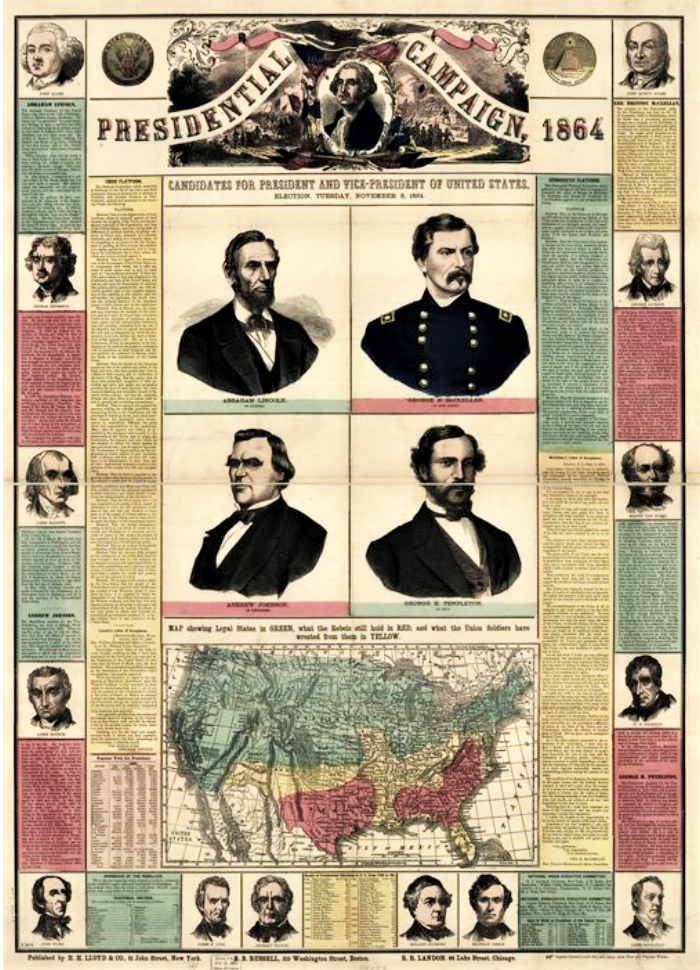 United States: map showing loyal states in green, what the rebels still hold in red, and what the Union soldiers have wrested from them in yellow. New York; Boston; Chicago, H. H. Lloyd & Co.;B. B. Russell; R. R. Landon, [1864]. 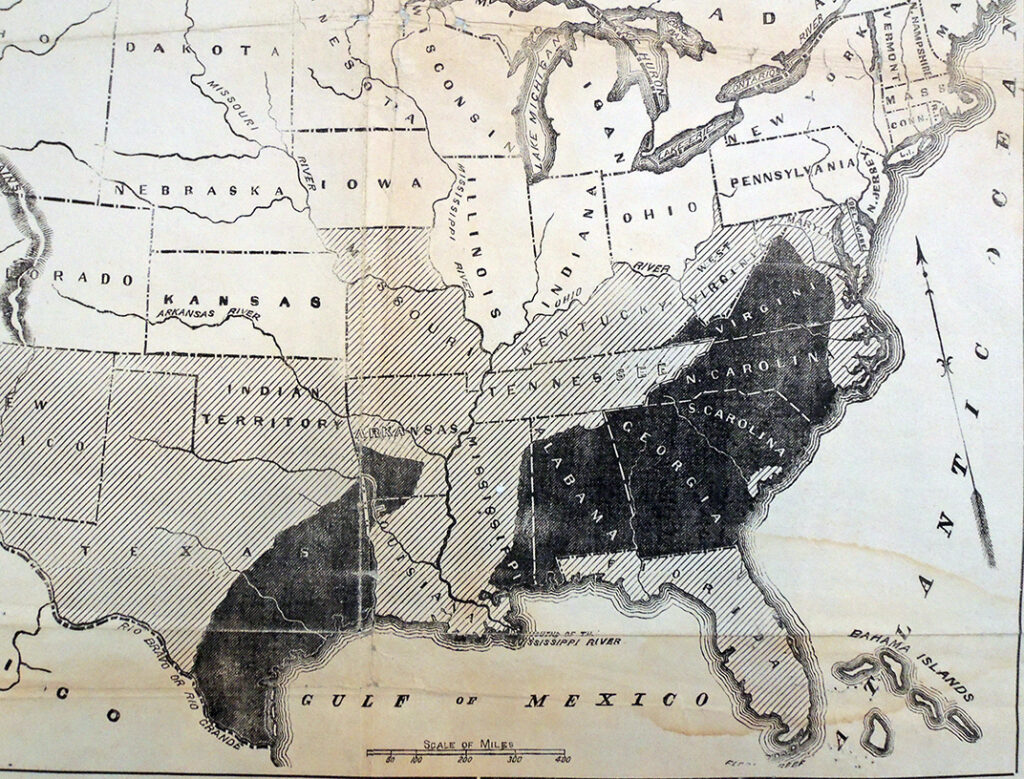 The last line of the broadside reads: “Voters of New York, the good work must go on! While our brave soldiers, of your own blood and kindred, are fighting in the field for the Union, let your votes be recorded in the same glorious cause at home!”

Two tables near the bottom emphasize the point of the map, outlining the population of the Confederate and border states and territories in 1861, contrasted by how much land had been recovered by the Union, as compared to what remained in the hands of the rebels. The tables show that of the 1,222,385 square miles possessed by the Confederacy in 1861, 909,275 of that had been reclaimed by the Union. 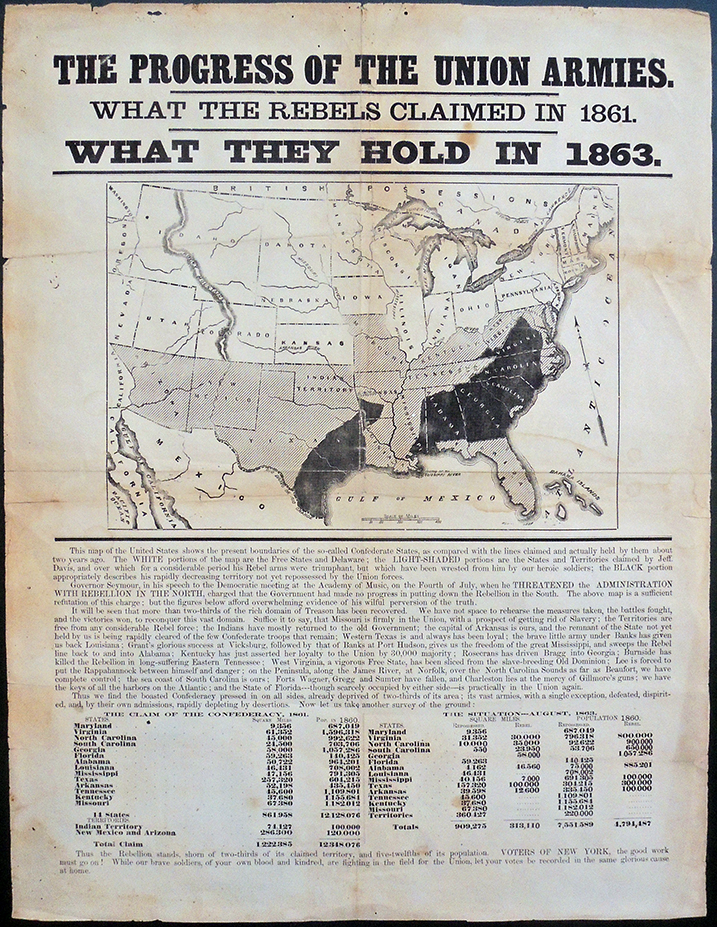