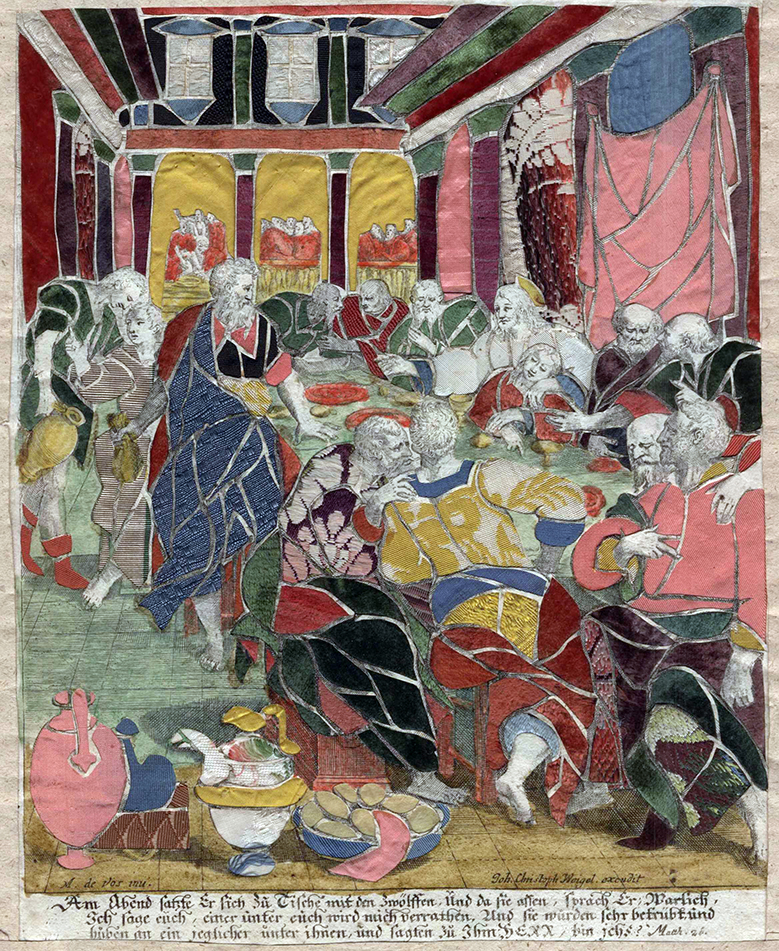 These are just a few of the many terms that have been used to describe the prints collaged with cut pieces of fabric or tin or paper. We have yet to agree on the terminology, perhaps because there are few large collections. Or maybe because they are so odd. Pictured here are four from a small group that recently joined the Graphic Arts Collection.

Our new collection of dressed prints are after Martin de Vos’ Life and Passion of Christ, one signed as engraved by Johann Bussemacher (active 1580-1613), one signed by Johann Christoph Weigel (1654-1726), others all unsigned. Each includes German Bible text at the bottom and are dated ca. 1710. 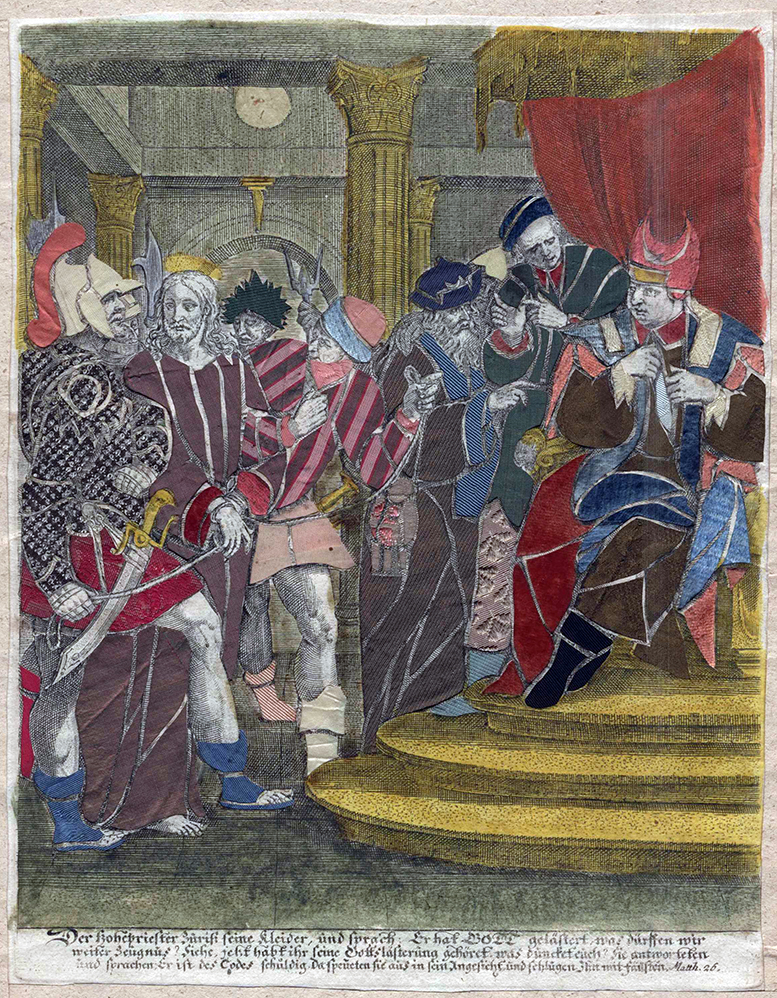 Alice Dolan wrote: An adorned print: Print culture, female leisure and the dissemination of fashion in France and England, around 1660-1779, RCA/V&A MA in History of Design http://www.vam.ac.uk/content/journals/research-journal/issue-03/an-adorned-print-print-culture,-female-leisure-and-the-dissemination-of-fashion-in-france-and-england,-c.-1660-1779/

Prints adorned with fabrics have largely been treated as extensions of the ‘fashion plate’, by historians, but this terminology fails to do justice to their complexity. (1) American museums have favoured the term ‘dressed plates’, but this phrasing too belies the complexity of the object, suggesting only a surface alteration, when, in fact, the majority of the decoration was placed underneath the print. (2) This article will use the terms ‘adorned prints’, ‘modified prints’ and ‘decorated prints’, although like ‘fashion plate’ and ‘dressed plate’, none of these terms were used by contemporaries.

The Morgan Museum and Library’s “twenty-one volumes entitled Engraved British Portraits contain nearly eight thousand prints, most of which date to the eighteenth or early nineteenth century. The collection of fashion prints consists of 391 examples from the seventeenth and eighteenth centuries. Most are mounted, hand-colored extracts from published albums. Thirty-two of the plates are “dressed” or decoupés, created by cutting out portions of the print and facing them from the reverse side with fabric.” 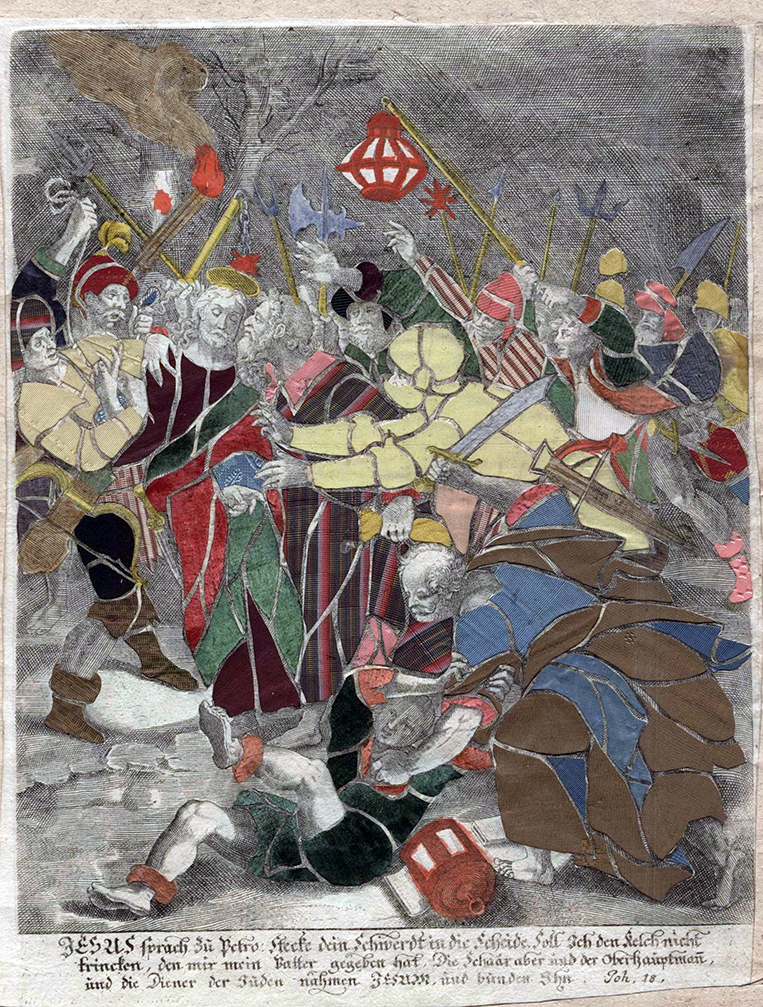 Elsewhere the term Stoffklebebilder or Spickelbilder is used to describe extra-illustrated prints. 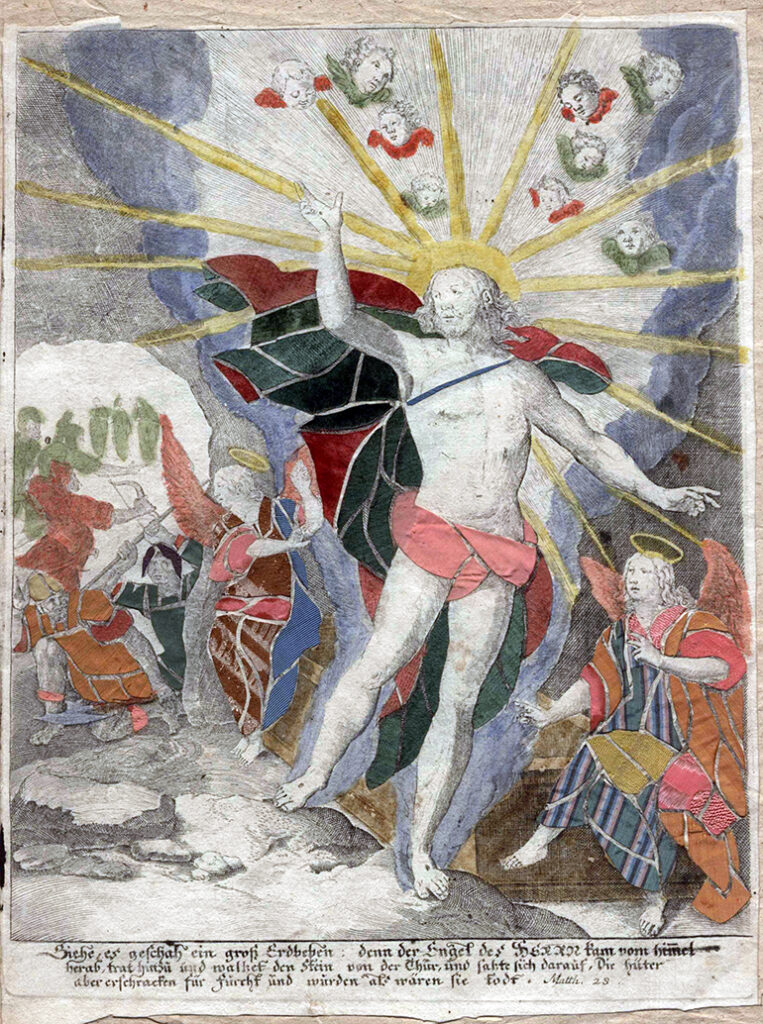 Note that ours are both hand colored and dressed with fabric. It is hard to tell if they are finished.