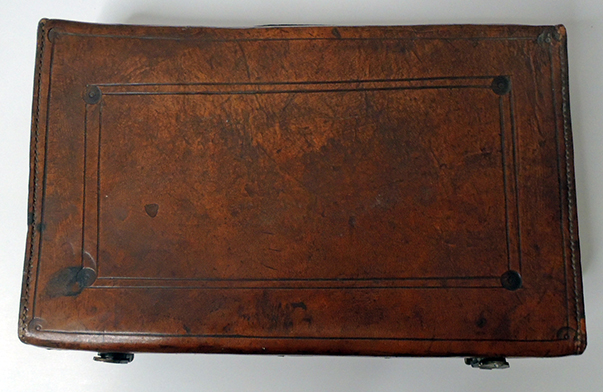 Since the Renaissance, apothecaries have turned up in plays, poetry, novels, and movies. Did you ever wonder what the apothecary used when she or he was called to someone’s home? The Graphic Arts Collection recently acquired a 19th-century, leather and brass apothecary’s travelling medicine case, manufactured by Savory & Moore, Chemist to the Queen & HRH Prince of Wales. It is a nice complement to the apothecary’s scale at the Princeton University Art Museum [bottom]. 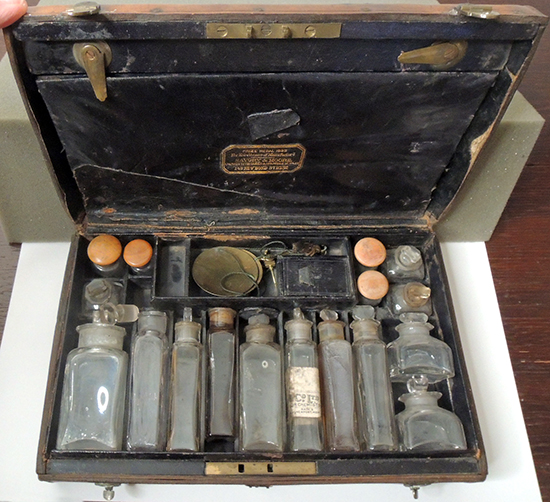 This hinged single layer case is lined in black morocco and has an inner hinged document compartment behind the cover, along with 20 compartments (one with hinged flap). One section is removable with further compartment beneath. Although we can’t be sure, this case is seemingly complete with 17 bottles, scales and weights, palette knife & mixer; one stopper broken, early leather repair to inside of lid.

Savory and Moore were established at 143 New Bond Street in 1797, finally closing their doors in 1968. This particular case appears to have traveled the West of England. Two of the medicine bottles are labelled, one with Henry Hodder & Co. Ltd. Bristol, Bath & Newport; the other with Young & Co., cash chemists, Bristol. Both labels are early 20th century but the case itself is 19th century. 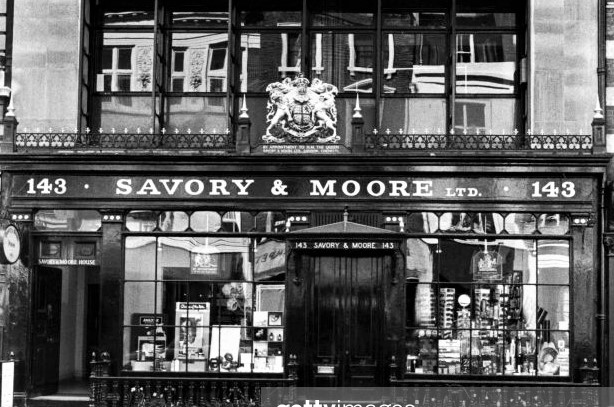 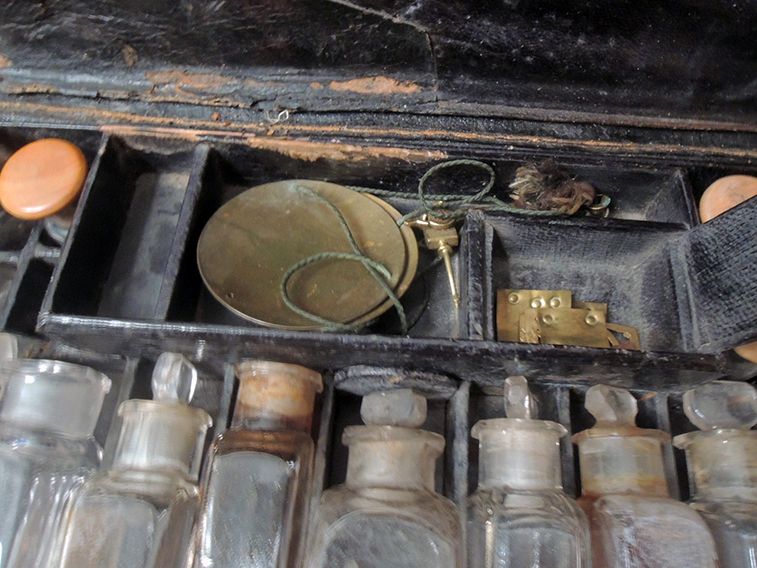 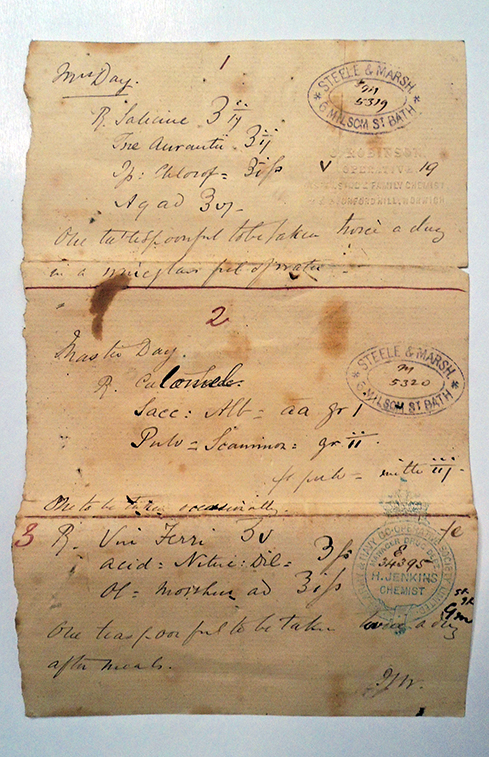 Loosely inserted in the document compartment is a single sheet of laid paper with three manuscript medicine recipes, one for ‘Mrs Day’, another for ‘Master Day’. The leaf includes printed stamps for Steele & Marsh of Bath, and H. Jenkins, chemist, in addition to an embossed stamp for J. Robinson, operative, dispensing & family chemist. [c.1870]

What else is in the library collection?

The Robert H. Taylor manuscript collection from Queen Elizabeth I (1533-1603), includes correspondence listing fees paid to [among many others] apothecaries, and other employees of the Great Wardrobe; military officers in fortifications; and keepers of royal palaces. 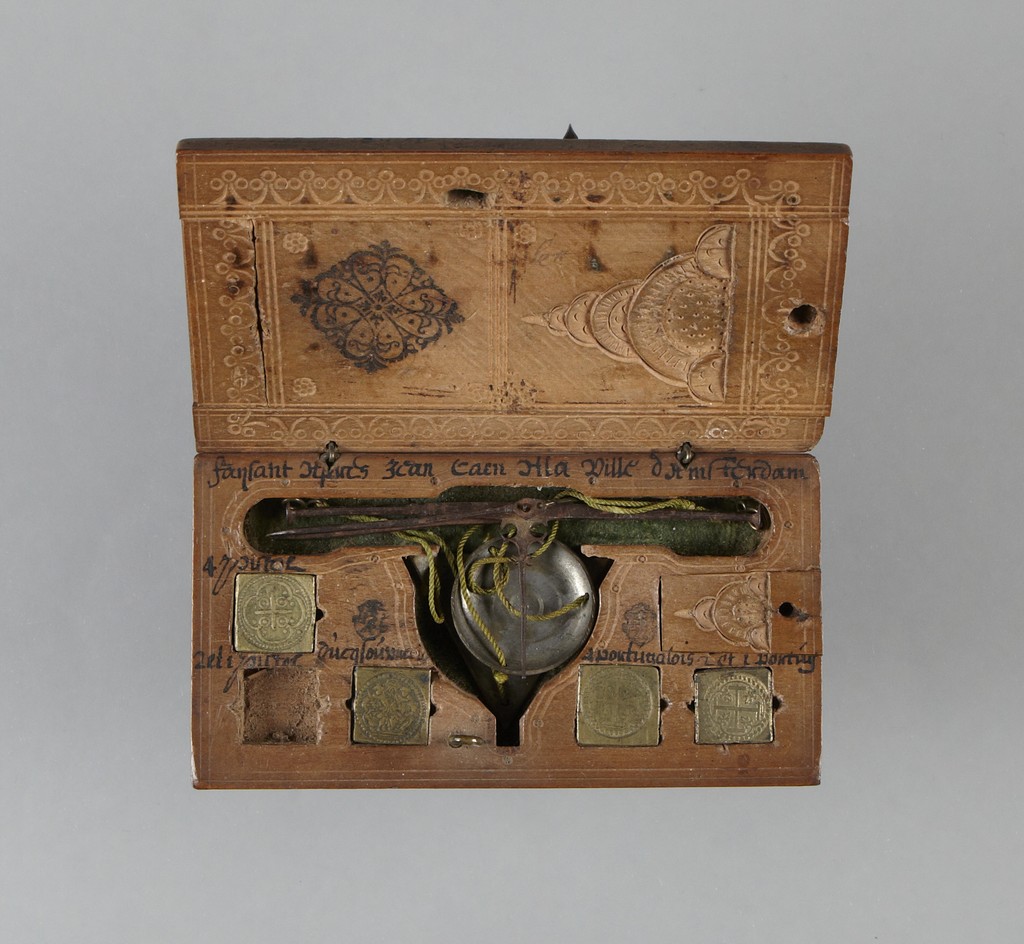 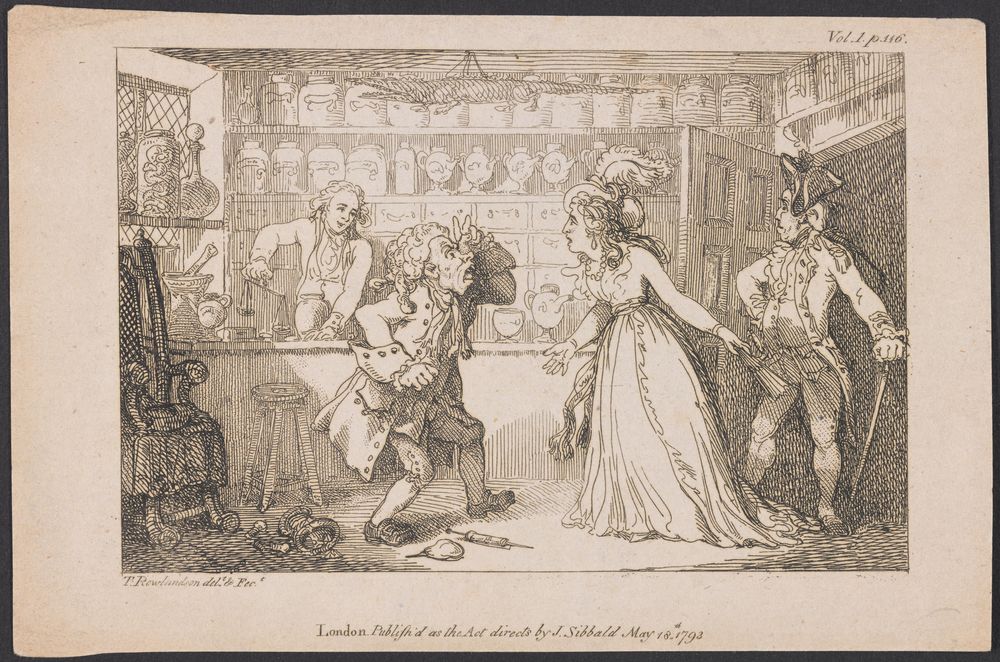 “Mrs Lavement arriving back home late after the theatre with Captain O’Donnel causing Mr Lavement (an apothecary) much anger and jealousy, Roderick Random apprentice to Mr Lavement watches the scene with amusement.” Etching by T. Rowlandson after himself after T. Smollett. in The Adventures of Roderick Random by Tobias Smollett, M.D. (London: J. Sibbald, and sold by T. Kay, 1793): v.1, p. 116. Graphic Arts GA 2014.00633 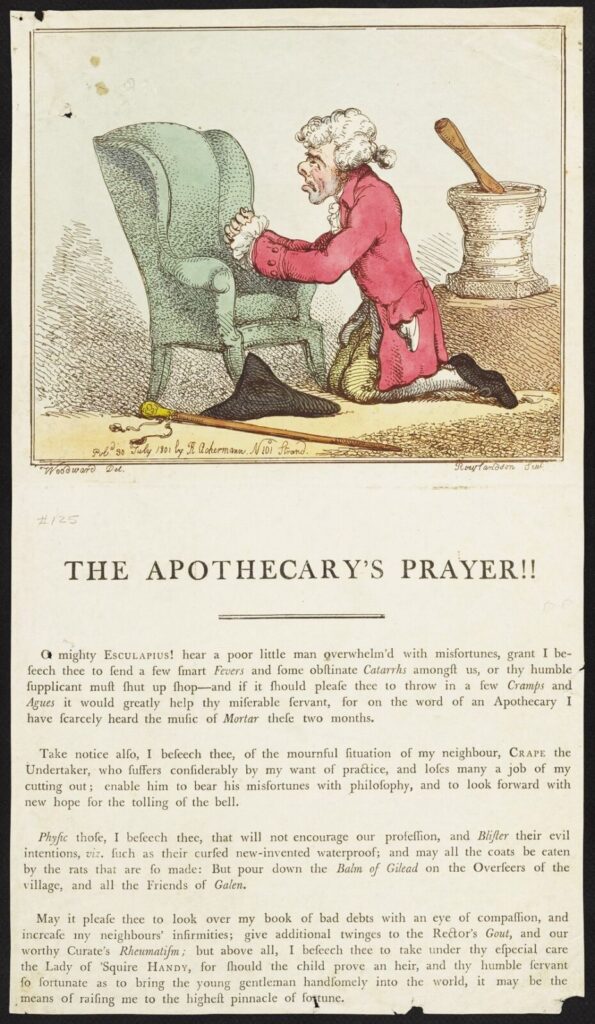 King Lear, Act 4, scene 6:
But to the girdle do the gods inherit,
Beneath is all the fiends’;
There’s hell, there’s darkness, there’s the
sulphurous pit,
Burning, scalding, stench, consumption; fie,
fie, fie! pah, pah! Give me an ounce of civet,
good apothecary, to sweeten my imagination.
There’s money for thee.