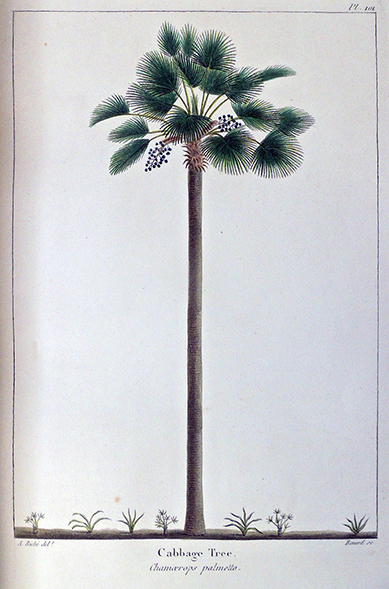 J[ules?] Renard after a drawing by Adèle Riché (1791-1878), Chamærops palmetto (Cabbage Tree), for François André Michaux (1770-1855), The North American sylva; or, A description of the forest trees of the United States, Canada, and Nova Scotia, considered particularly with respect to their use in the arts, and their introduction into commerce: to which is added a description of the most useful of the European trees … (Philadelphia: Rice, Ritter, 1865). Rare Books 8772.642.11 v.3 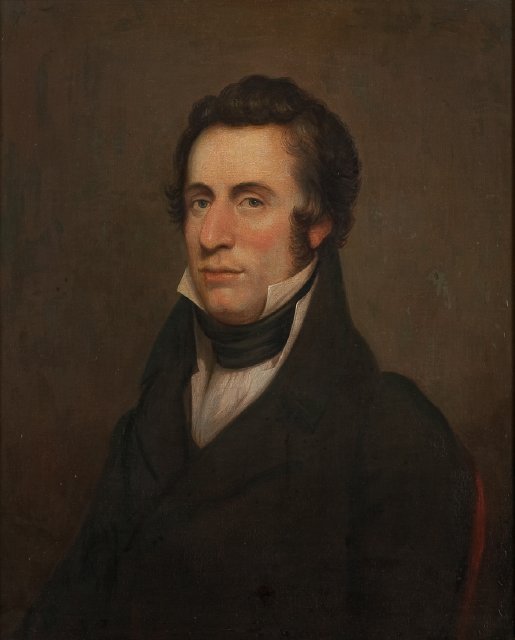 Andre Michaux (1746-1803) was sent to the United States in 1785 to find and collect woods suitable for building and plants good for eating, which could be grown in France. Traveling with his teenage son François André Michaux (1770-1855) and gardener Pierre Paul Saunier, he established two gardens in the United States to facilitate the accumulation of seeds and plants for shipment to France.

One of these 18th-century gardens was in New Jersey, across the Hudson River from New York City in Bergen County and the other in Charleston, South Carolina. When Michaux and his son returned to France, Saunier was left in New Jersey to manage the garden (with no English and little money). According to a study by William J. Robbins and Mary Christine Howson: “Today the site of Michaux’s New Jersey Garden is divided between the Hoboken Cemetery, warehouses, railroad tracks, and marshlands along the Cromakill Creek. … Nothing marks the spot and no one in the neighborhood realizes that this bit of land once was of special significance to France, as well as the United States of America, and a matter of concern to some of the outstanding figures of the day.…”–“André Michaux’s New Jersey Garden and Pierre Paul Saunier, Journeyman Gardener,” Proceedings of the American Philosophical Society 102, no. 4 (Aug. 27, 1958). 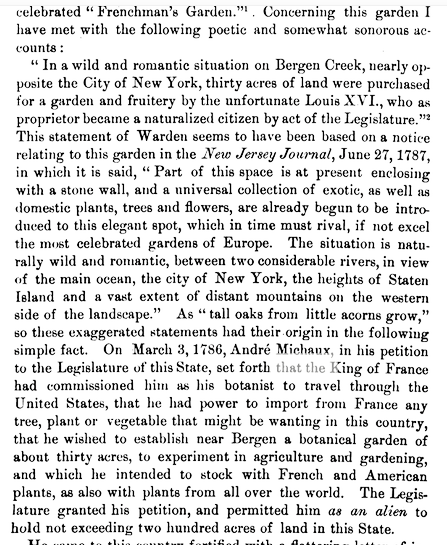 Above selection from: Charles Hardenburg Winfield, History of the county of Hudson, New Jersey: from its earliest settlement to the present time (1874) 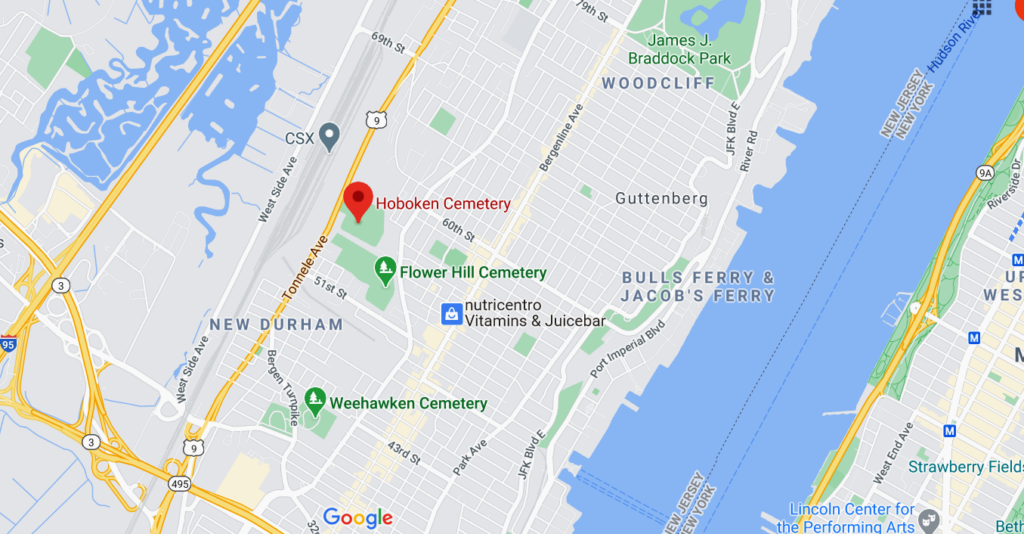 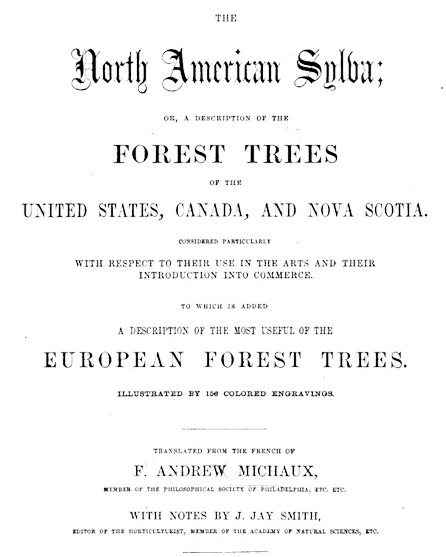 François André Michaux later returned on a commission by the French government to explore the forests of the United States, Canada, and Nova Scotia. By 1810 he completed the North American Sylva, first published in twenty-four parts, issued in pairs from July 1810 to March 1813, before being collected into three volumes. An English edition of the Sylva was originally planned in six half-volumes, but a seventh was added to help accommodate the extra plates and the corresponding text.
Read more: An Oak Spring sylva: a selection of rare books on trees in the Oak Spring Garden Library / described by Sandra Raphael (Upperville, Va.: Oak Spring Garden Library, 1989). Graphic Arts SD391 .R36q 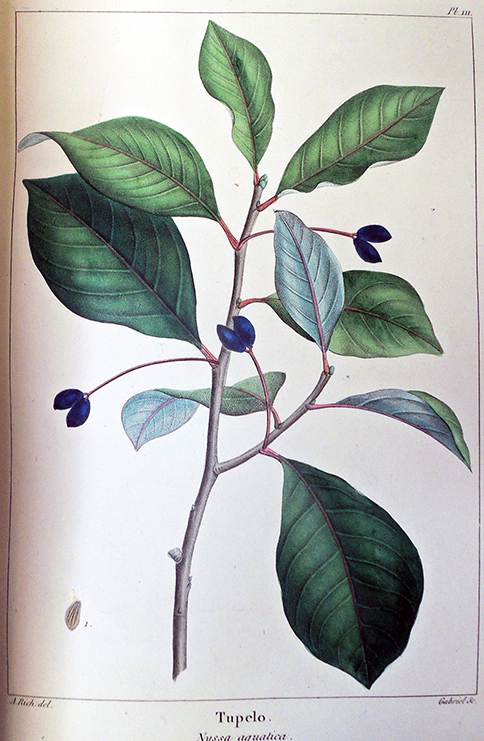 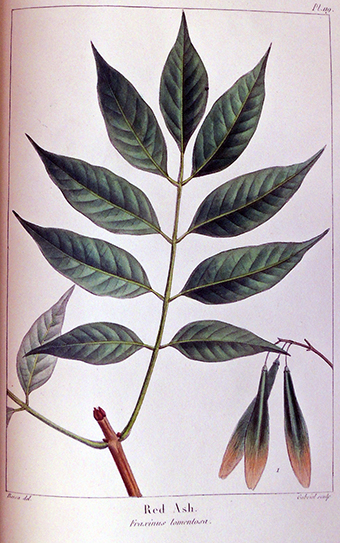 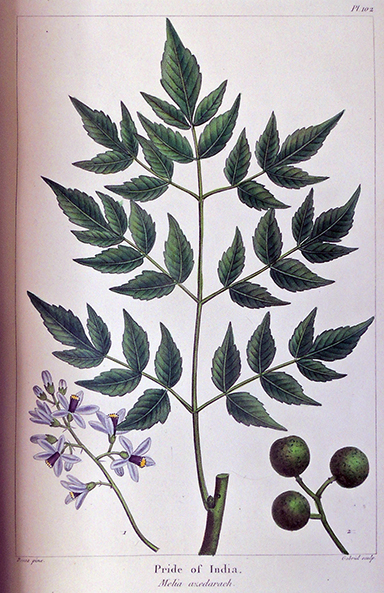