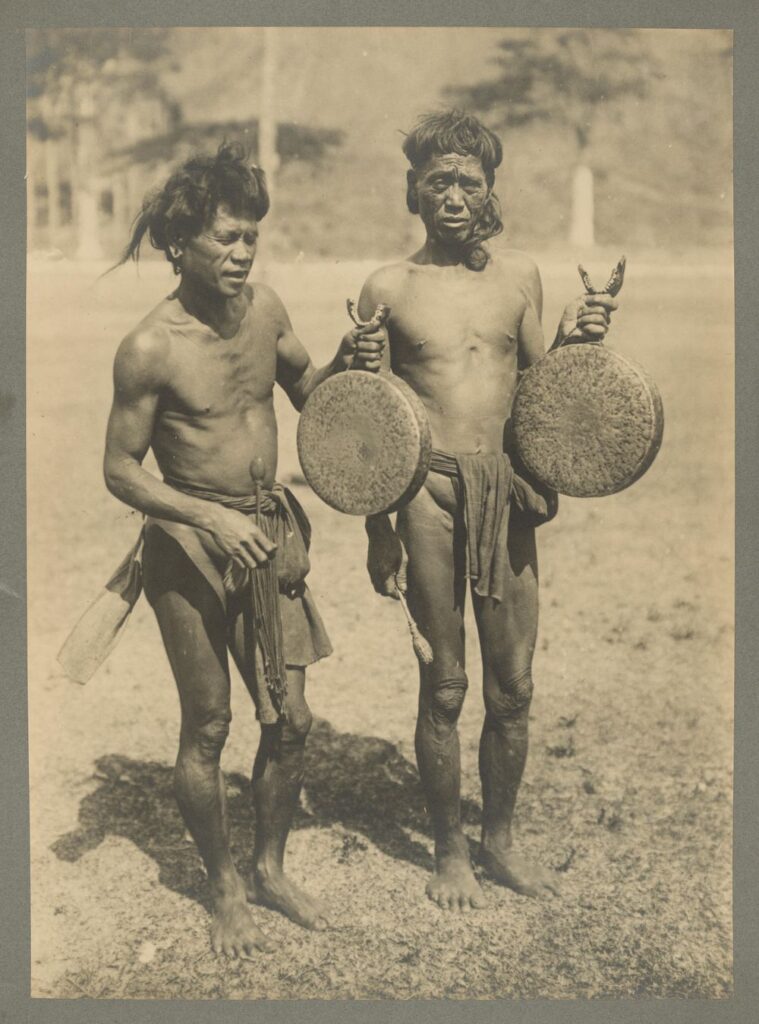 Verso text: “Two Igorrots with Gongs. The Gongs are used on which to bat time for their dances. Note that the handles are human jawbones from the heads of enemies taken in battle. The upper portion of the skull is given a place of honor in the home of the captor.” Two Igorrots with gongs
Source Metadata Identifier:, 10636333
Identifier:, ark:/88435/zg64tv292
Call Number: GA 2011.00241 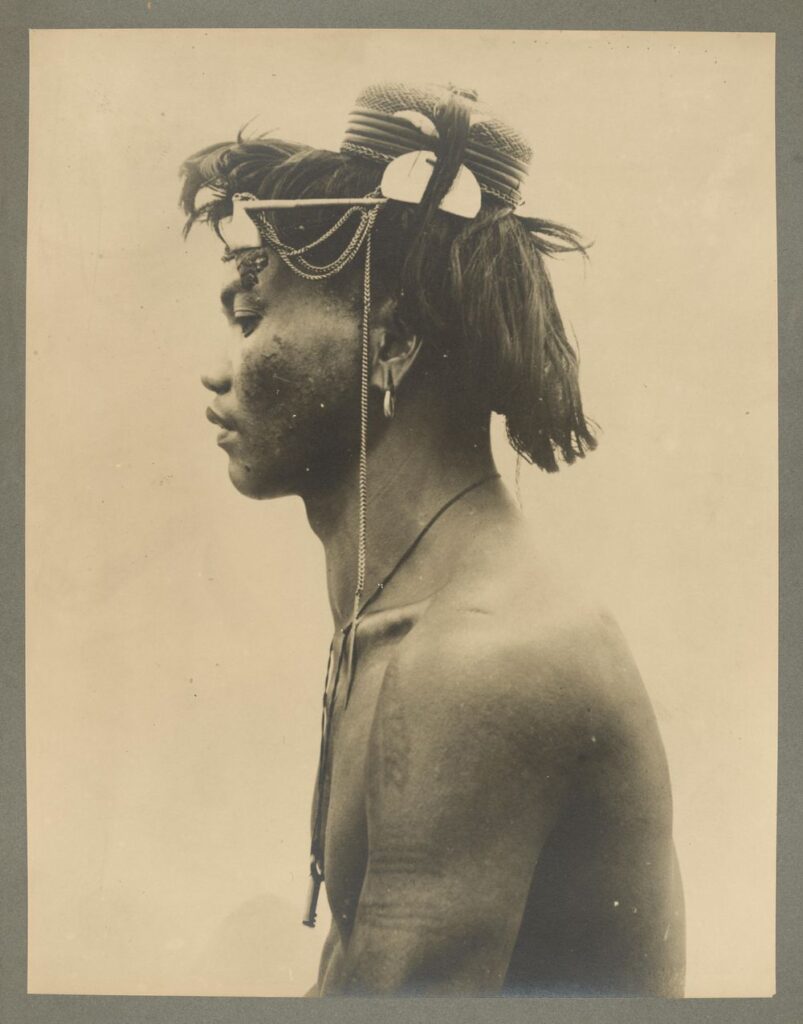 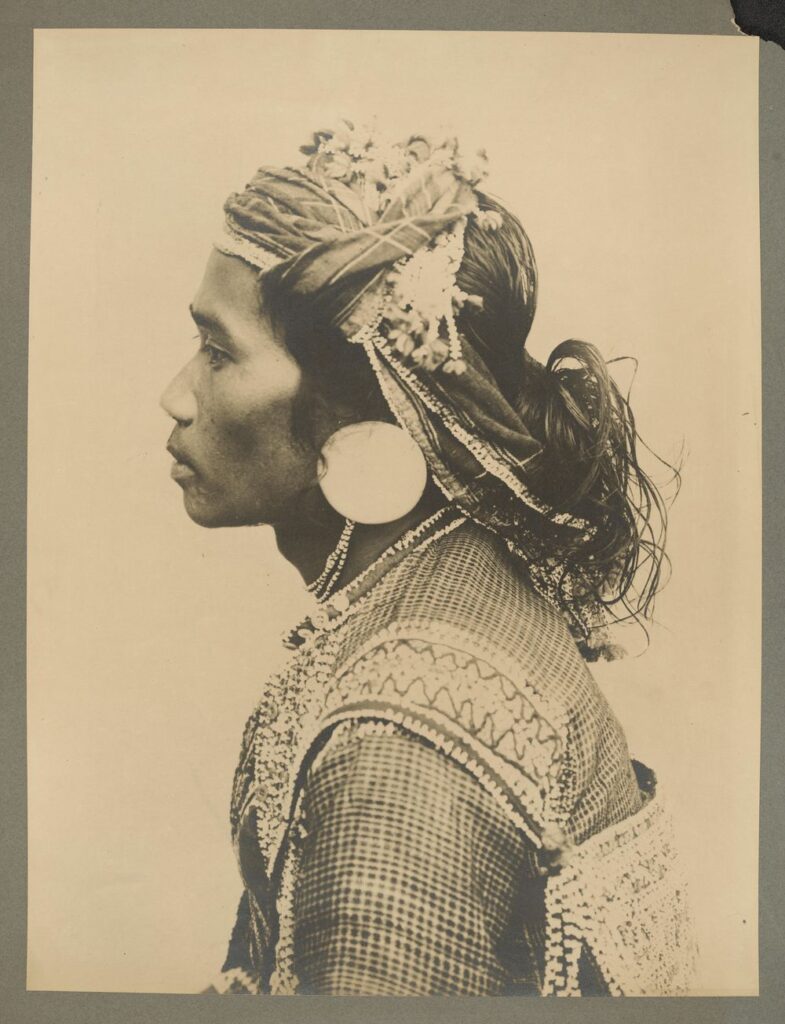 Early in the twentieth century, historians, anthropologists, and businessmen traveled to the Philippines to both study and bring elements of that culture to the United States, resulting in a massive exhibit at the 1904 St. Louis Fair. “Several anthropologists had gone to the Philippines to study the tribes people of the Cordillera region Northern Luzon. In 1903, the National Geographic did a spread on the people of the region. Anthropologist Albert Jenks conducted fieldwork in 1902, and his ethnographic information was used in the brochures describing the tribes people at expositions in the U.S. Jenks, who worked for the U.S. government, brought over people from the region to the Fair, some of whom lived with him and his wife.” — https://www.foundsf.org/index.php?title=Igorots_Arrive_in_San_Francisco_in_1905

The Graphic Arts Collection holds 30 mammoth photographs, recently digitized, taken by an unidentified expedition to the Philippines. The text pasted on the backing board is often racist and pejorative, only some of which is quoted here. Although none are dated, the prints are presumed to be from the early 20th century, after the 1904 fair: “Bagobo Man. Showing how teeth are filed. The Bagobos live on the Gulf of Davao in Mindinao and are noted as the tribe who offer human sacrifices. In 1909 twenty of these people were sentenced by Judge Springer of the Court of first Instance for having taken part in a human sacrifice in the hills near Sta Cruz Davao. They offered a sacrifice of an 8 year old boy to Mandarangan the god of evil as their crops had been bad. Had their crops been good they would have offered a sacrifice to Dawata the god of good. In any case they must appease the wrath of the gods. This tribe make very showy clothing of beads and hemp cloth and are probably the most picturesque tribe in the Islands.”

Blunt opinions are made about the people photographed: “They are of a low order of intellegence [sic], live in filthy huts and eke out an existence by abortive attempts at agriculture.” An emphasis is placed on the use of skulls in decoration, and on the local diets that include dog meat.

“A Young Igorrot. Taken at Bontoc, Island of Luzon. The Non-Christian tribes of the central part of Luzon number about 500,000 souls of whom the Igorrots are the most numerous. They are great agriculturists but their favorite dish is Dog. Any kind of dog – but dogs with a white skin and hair preferred. They are head hunters and when a successful war party returns there is great rejoicing. The gory trophies are stuck up in front of the home of their captor and there ensues a great feast with much drinking. They believe that the spirit of a person can make trouble for those who killed him but that such a spirit profits by the food and drink consumed by the living at the feast in honor of their killing. A man or boy who has taken a head finds it easy to get an acceptable wife and the influence of the women is one of the potent factors which renders difficult the supression [sic] of head hunting amongst these people.”

It is hoped that by digitizing these images, work can be done to improve the study and description so poorly written 100 years ago. 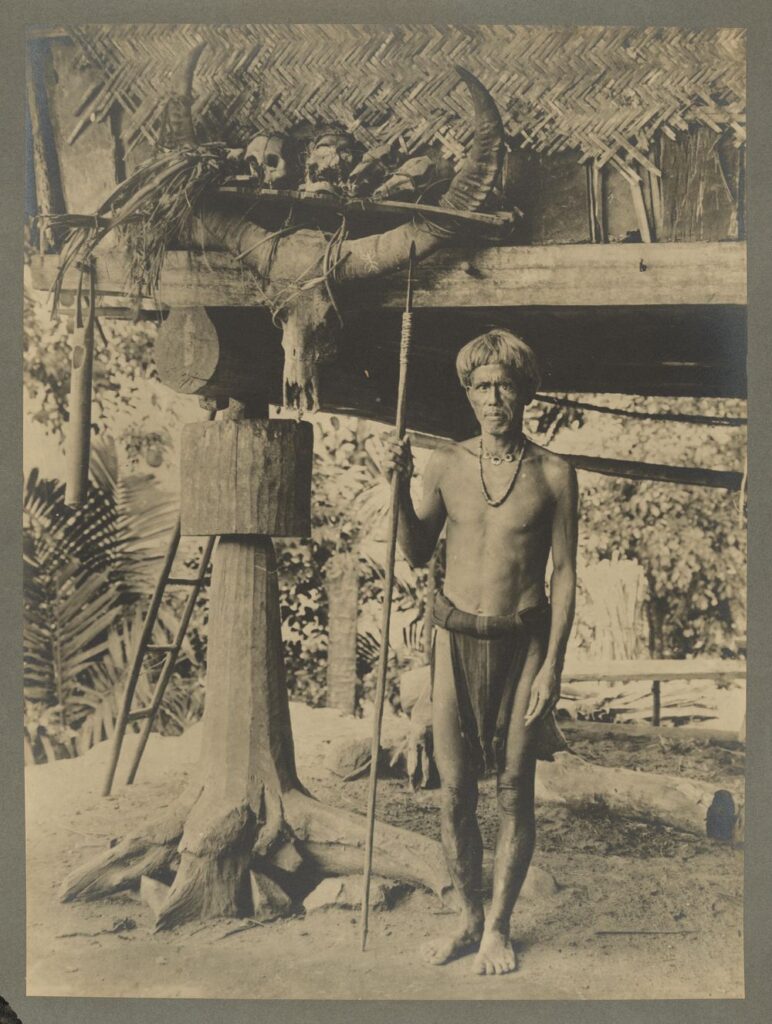 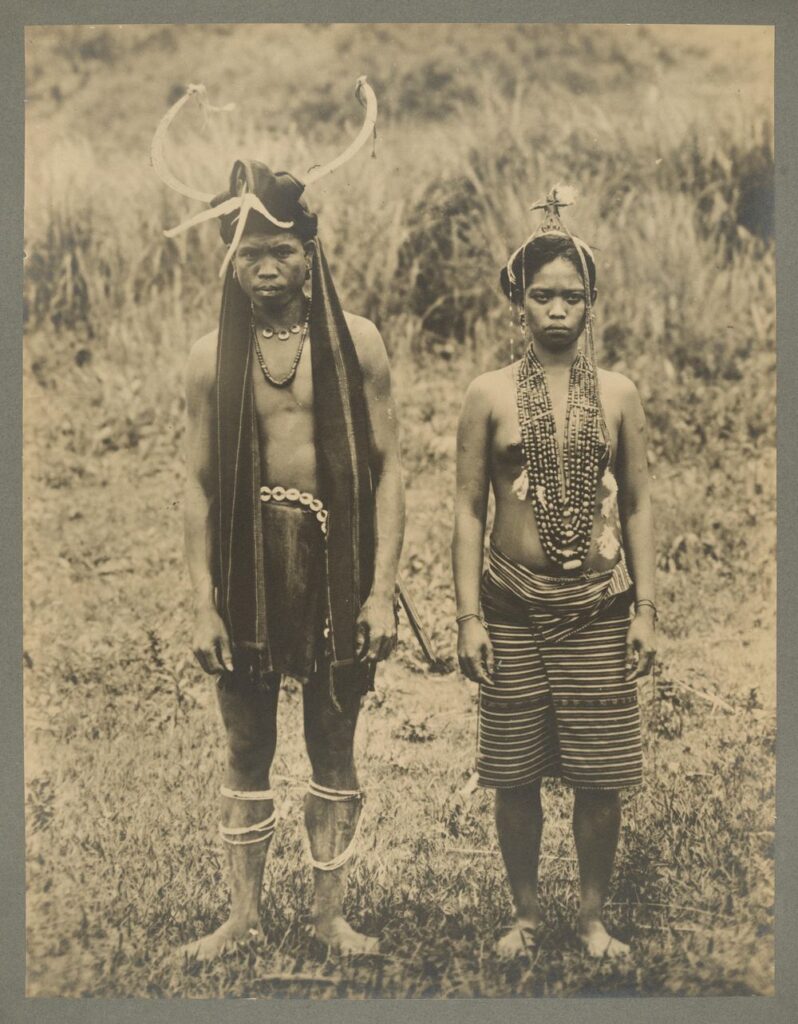 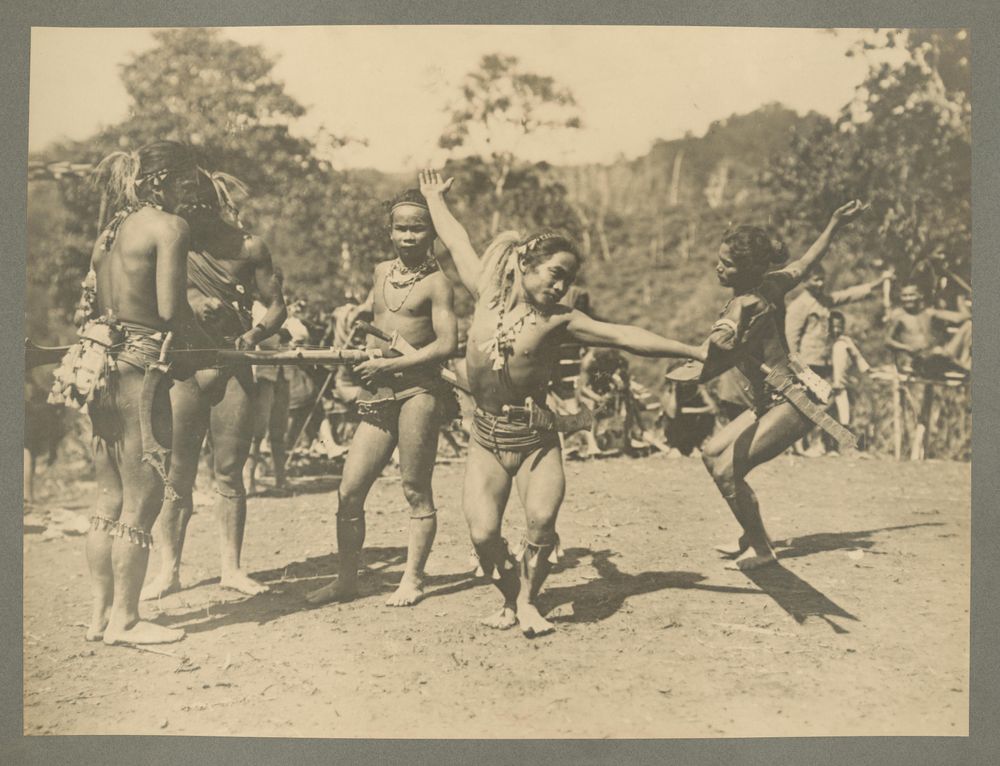 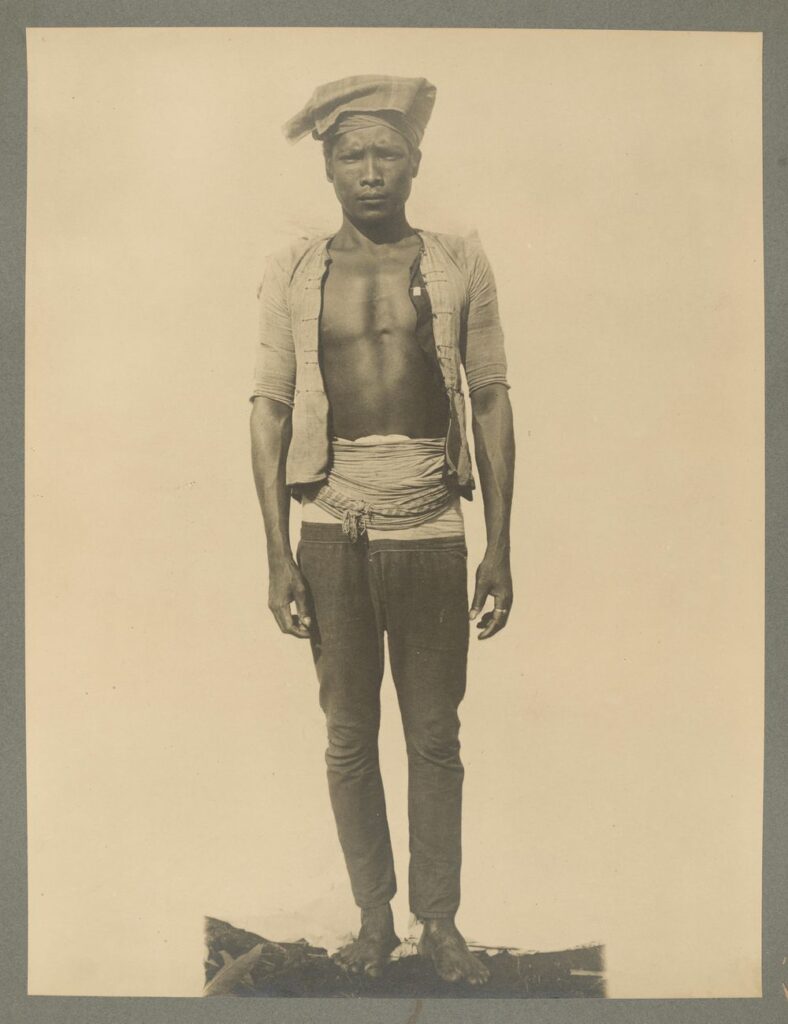 Verso text: “Subano Man. The Subanos inhabit the hills in the interior of the Island of Mindinao and are not as warlike as the Moros who inhabit the coast.” Subano man
Source Metadata Identifier: 10654192
Identifier: ark:/88435/rx913z24z
Call Number: GA 2011.00238

A group of Ifugao Igorrots fighting for a piece of meat which was thrown away by a camping party as unfit for human consumption. Taken at Magok, Ifugao, Island of Luzon
Source Metadata Identifier:, 10649713
Identifier:, ark:/88435/1g05fk95r
Call Number: GA 2011.00213