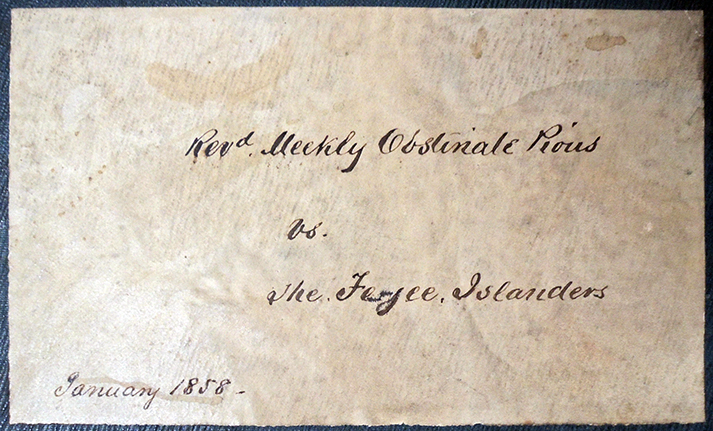 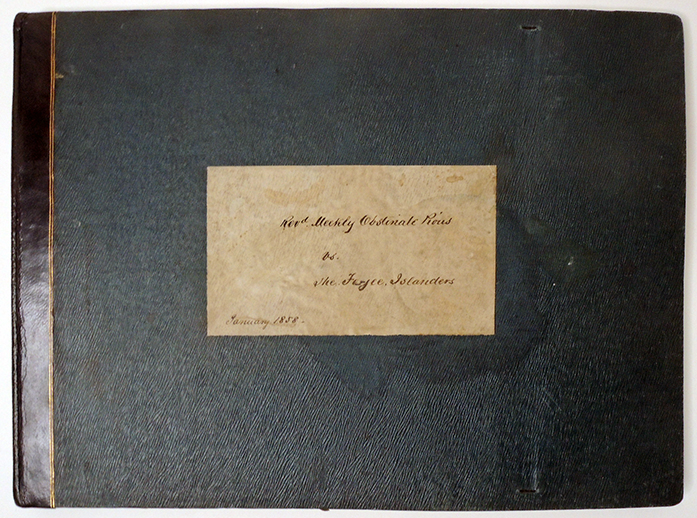 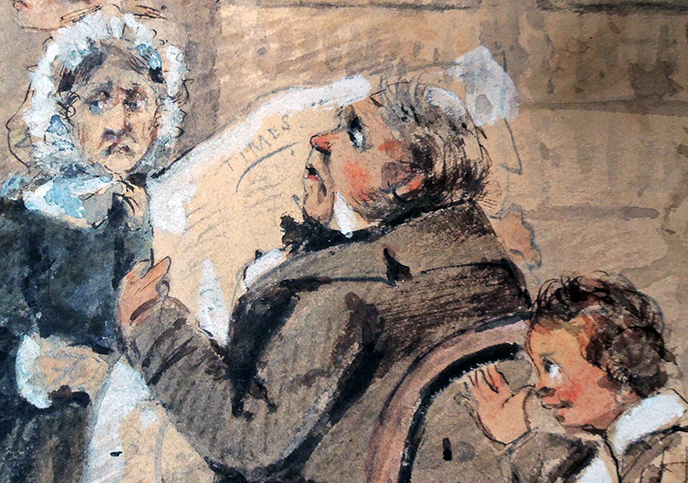 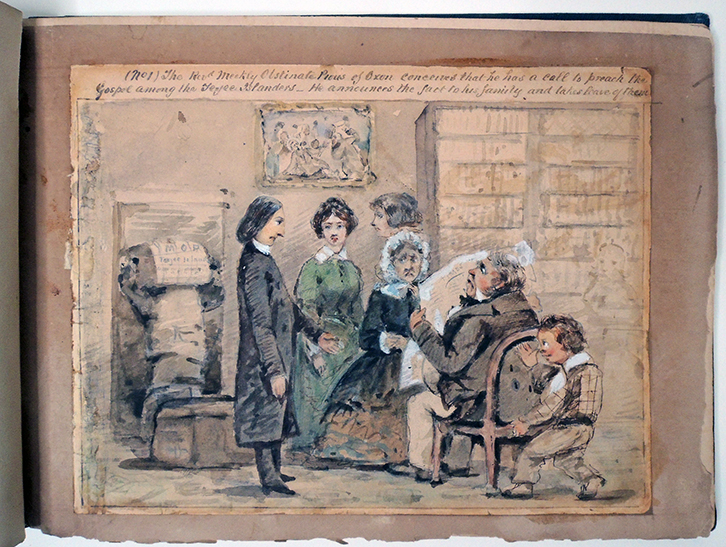 The Graphic Arts Collection recently acquired a pictorial narrative set on the island of Fiji and dated January 1858. It tells the story of a British missionary known as Rev. Meekly Obstinate Pious and his wife, who sail to Fiji in order to convert the indigenous people to Christianity. Through a series of events, they build a church and make friends with their neighbors but ultimately are killed and eaten. When British sailors arrive in search of Rev. and Mrs. Pious there is a battle and everything on the island is destroyed. 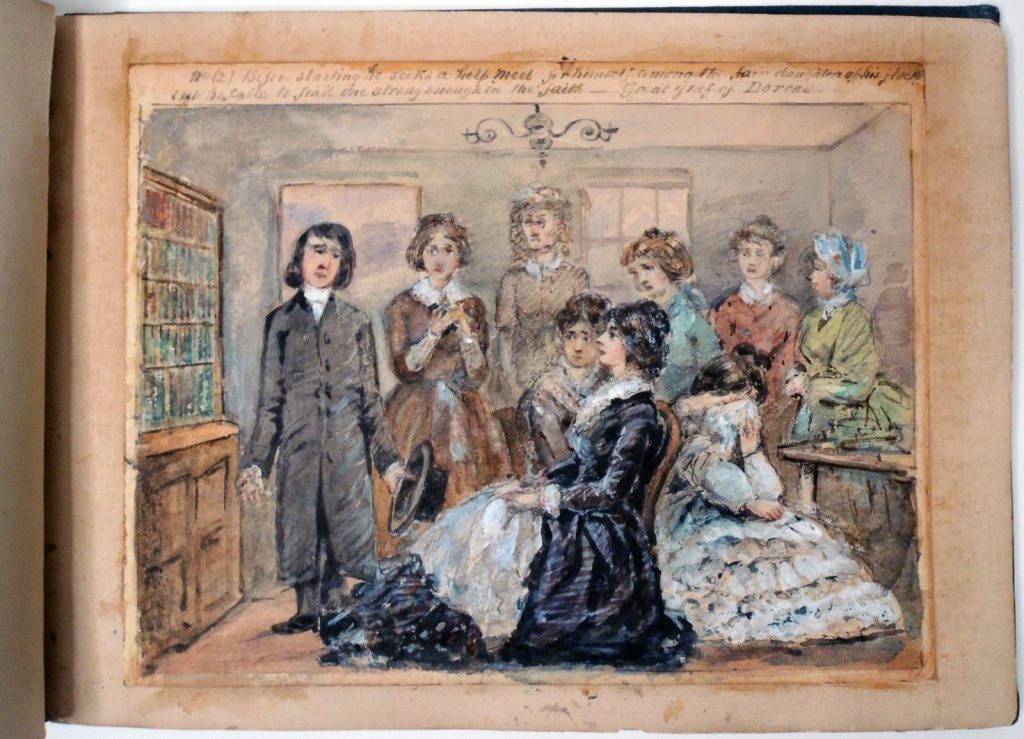 The story is told through fourteen watercolors and brief captions. It is unclear if the sequential narrative was meant to be reproduced and published, nothing similar can be traced. Some images are disturbingly racist and only a selection are reproduced here.

The presentation of savage cannibals in the South Seas was routinely found in English books, newspapers, and theatricals, such as in the 1831 Theatre Royal, Covent-Garden performance Neuha’s Cave, or, The South Sea mutineers, partly based on Lord Byron’s poem “The Island, or, Christian and his comrades” (1823). 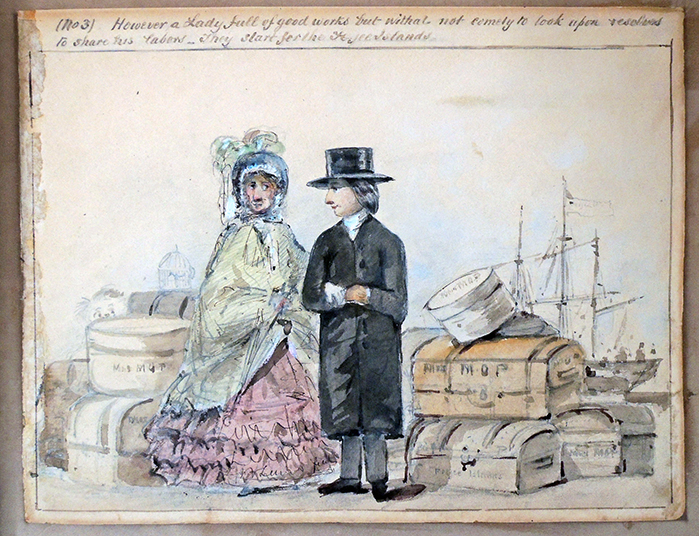 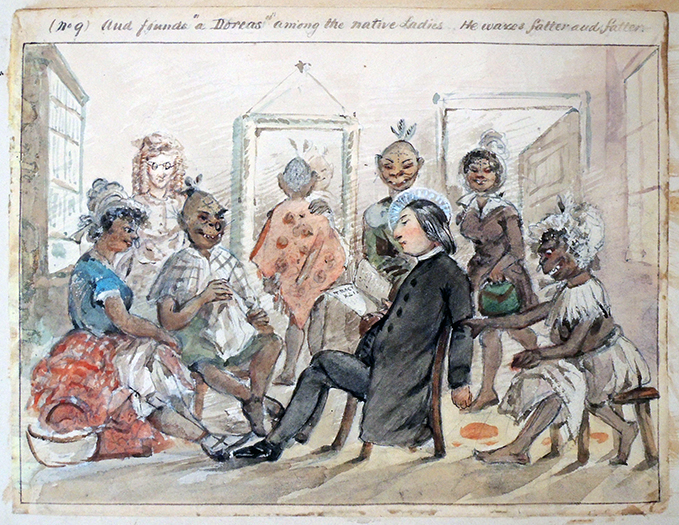 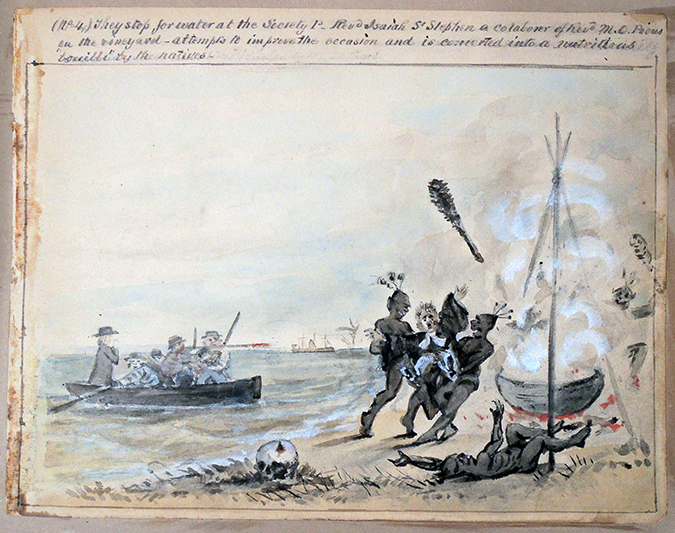 Actual missionaries might have served as the basis for this parody. From 1838 to 1856, James Calvert (1813-1892) and his wife Mary Fowler Calvert (1814-1882), along with John Hunt (1812-1848) lived in Fiji, promoting Christianity. Calvert quickly learned the native language and over time, published religious books in Fijian as well as Fijian dictionaries for English speakers. Hunt published a Memoir of the Rev. William Cross, Wesleyan missionary to the Friendly and Feejee islands (1846) and after Hunt’s death in 1848, the missionary Thomas Williams wrote a memoir of Hunt’s life and work, also know under the Fijian title: Tukutuku kei Misa Oniti (1848). 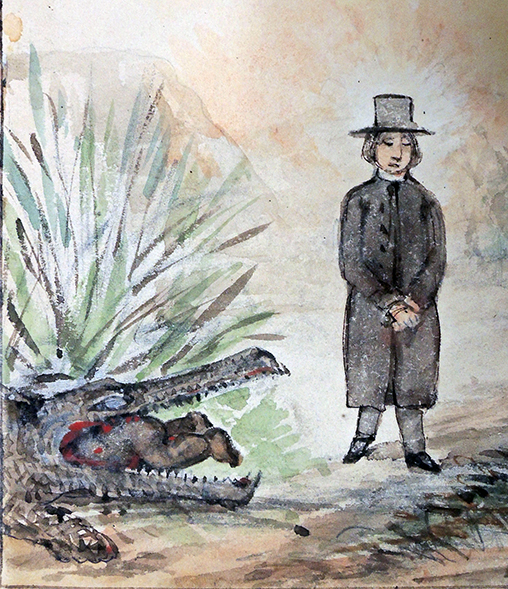 Walter Lawry’s 1850 book Friendly and Feejee Islands: a missionary visit to various stations in the South Seas, in the year 1847 emphasized the practice of cannibalism and painted an unflattering portrait of a primitive society. Here is a section:

Their cannibal propensity is well known. They do not attempt to disguise it. The eating of human flesh is not confined to cases of sacrifice for religious purposes, but is practised by them from habit and taste. There can be no question that, although it may have originated as a sacred rite, it is continued in the Feejee group for the mere pleasure of eating human flesh as food. Their fondness for it appears from the custom they have of sending portions of it to their friends at a distance, as an acceptable present; and the gift is eaten, even if decomposition has begun before it is received. So highly do they esteem this food, that the greatest praise they can bestow on a delicacy is to say, “ It is as tender as a dead man.” 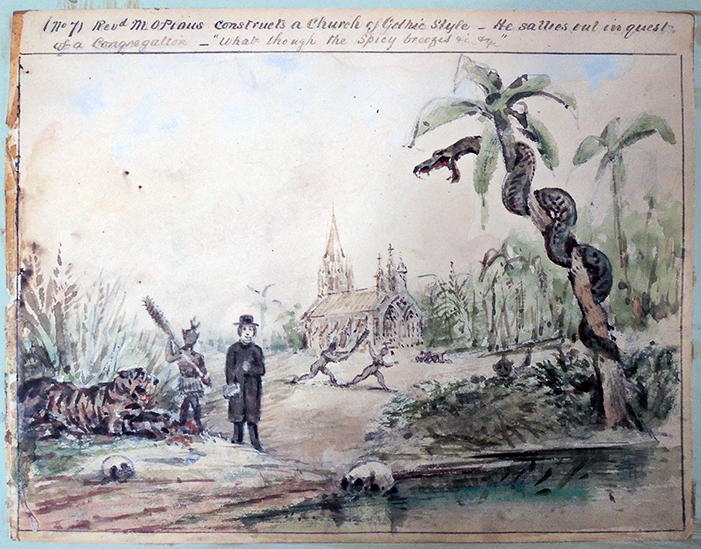 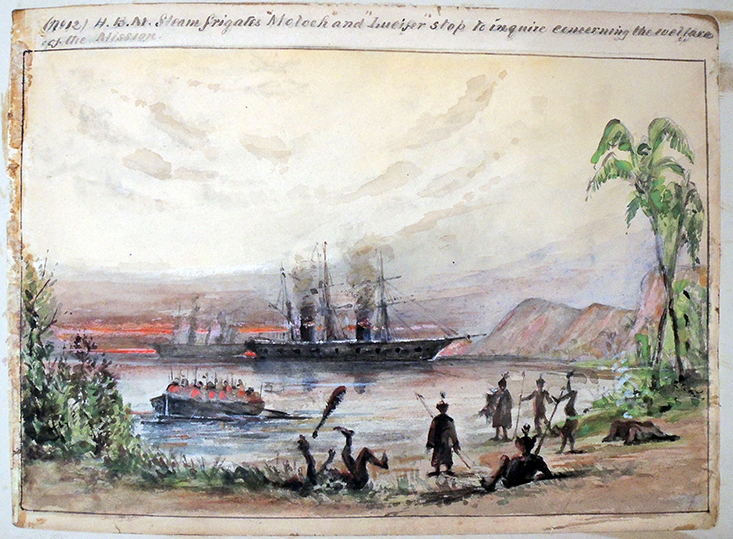 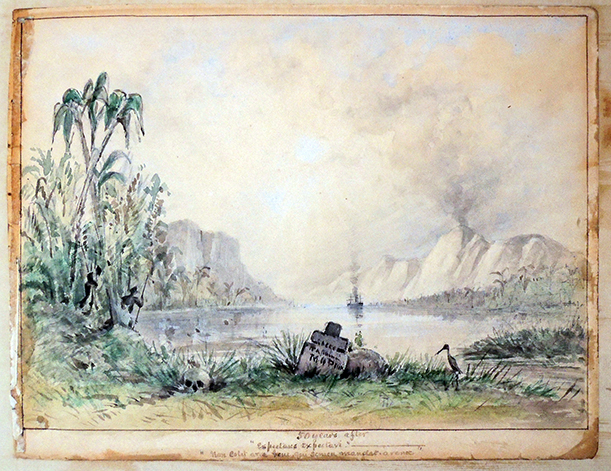 50 years after: {39:2} Expectans expectavi. Dominum, et intendit mihi = I have waited expectantly for the Lord, and he was attentive to me.