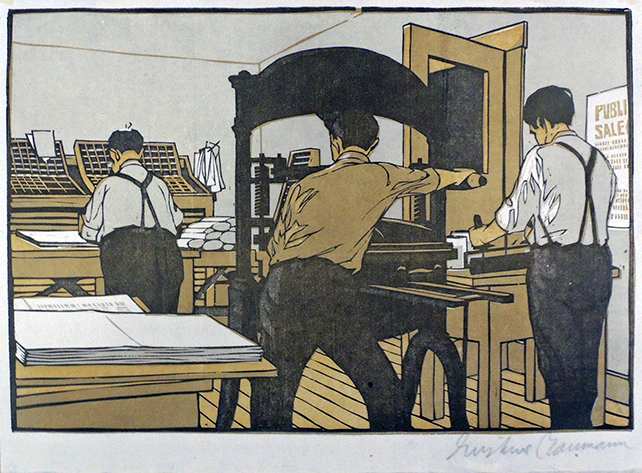 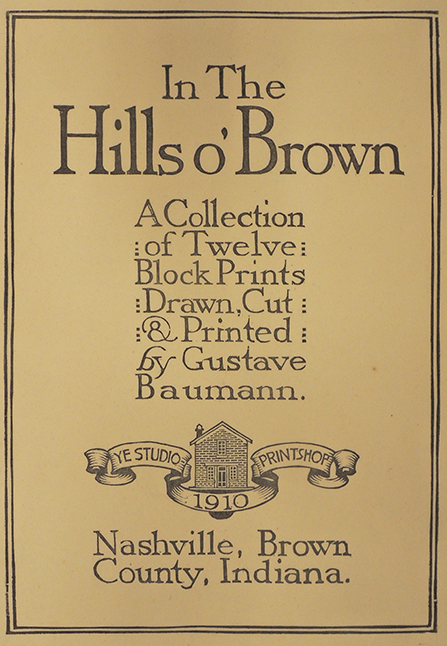 Gustave Baumann spent much of his childhood in Chicago but in 1909 he and other members of the Palette and Chisel Club discovered Brown County, Indiana. “[By] saving up $100.00 he could spend three months in Brown County, sketching and painting. In 1910 he produced a portfolio of small format color woodcuts entitled In the Hills of Brown and then produced some of the largest woodcuts of the time. His color woodcuts were selected for inclusion in the 1915 Panama Pacific International Exposition where he won the Gold Medal for Prints and an Honorable Mention for his Exhibit of Color Woodcuts. In the summer and fall of 1917, Baumann visited Wyoming, New York; Manhattan; and Provincetown, Massachusetts.” https://www.annexgalleries.com/artists/biography/140/Baumann/Gustave

Although the plan was to only stay a short time, Baumann loved Brown County, its people, the hilly scenery, and isolated location. He lived there six and a half years, often using the location as his primary subject matter. Thanks to Baumann’s friend, Elmer Adler,  the Graphic Arts Collection has an original 1910 edition of this rare portfolio, rather than the later 1914 reprinting.

Within the series of four color woodblock prints, is a depiction of the shop where Baumann did his printing, the commercial press of Alonzo Allison (1851-1926). Allison was the editor and publisher of the Brown County Democrat and this print shows him and his staff (which included his daughters) at work getting out the newspaper. Allison was a local celebrity and the subject of this profile in The Inland Printer, 56 (1916), “Alonzo Allison, Editor And Publisher Brown County Democrat by Albert G. Brenton.

In Nashville, the county-seat of Brown County, Indiana, lives a figure unique in newspaperdom of the State. The man is Alonzo Allison, editor and publisher of the Brown County Democrat, an eight-page weekly with a healthy circulation of 1,800. His claim to fame is fourfold: First, his publication is the only county-seat paper in the State still printed on a Washington hand press. Second, he is believed to be the youngest veteran of the Civil War and the oldest printer in point of service in Indiana. Third, his father was a printer before him and he has an uncle, four brothers, three sisters, four cousins, five sons and two granddaughters who are working at the case. Fourth, he is said to hold the state record for fast composition, setting 2,250 ems, eight-point, in an hour on a sheriff’s bill.

Surely a character of some distinction in printerdom! Little wonder that beaten paths are made to his door or that his quaint print-shop should be made the subject of an appropriate wood-block picture in three tones by Gustave Baumann, a noted young German artists. Baumann’s engraving entitled “Press Day,” is shown herewith. It gives the artist’s impression of the Democrat office in the midst of edition-day activities. Alonzo Allison is shown performing the functions of the mailing force, while his sons, T.H. and C.A. Allison, are operating the “muscle developer.”

Considering Mr. Allison’s claim to fame, it would seem that a reproduction of his print-shop in any other medium than that chosen by Baumann would grate on artistic sensibilities. The whole atmosphere of the subject is rare with a spirit of antiquity that indeed is refreshing in contrast to linotypes, offset presses, modern high-speed efficiency, and the like.

Probably no duplication of Allison or his print-shop could exist in another part of Indiana, and it would be disappointing to one who knows Brown County or Nashville to have a printery of any other sort there. Brown County is Indiana’s Switzerland. Only a few years ago the first railroad crossed its boundaries. As late as the past autumn, steps were taken to establish the first electric light plant within its confines.

… Allison is sixty-four years of age and has been in the printing business for fifty-seven years, having set his first type when seven years old. He has been in active newspaper work continuously since his beginning, with the exception of eighteen months spent in the Union army in the Civil War. His printing-office is the only one in Brown County, although his father at one time successfully operated a Republican paper in competition. At the age of twelve, Allison and his mother went to Nashville, Tennessee, to visit his father, who was quartermaster of the Seventeenth Indiana regiment, then in camp at Nashville. Allison, though only twelve years old, begged so hard to remain with the regiment that his father and mother consented, and the lad donned a soldier’s uniform, the legs of the trousers being cut off and the coat made to fit him.

He spent eighteen months in the army, much of the time being under heavy fire and in the thick of important battles. At the close of the war he went with his father to Columbus, Indiana, where they published the Dollar Weekly Union. In the fall of 1870 the Allisons went to Nashville, Brown County and established the Jacksonian.

In December, 1884, Alonzo Allison purchased the Brown County Democrat. For lack of means he was compelled to do all the work himself, and for several years he got the copy, set the type, made up the paper, rolled the forms and pulled the lever on a Washington hand press, which he uses in printing the Democrat to-day. Allison calls his press his “muscle developer.” Although he is near the three-score-and ten limit, Allison is still “some speed artist” at the case, sticking up 1,500 ems an hour. He holds a record of setting 2,250 ems, eight-point, in an hour on a sheriff’s bill. When he was employed in an office at Columbus at one time his employer wanted to pay him by the thousand ems. The first week Allison made $39.50. The next week the arrangement was changed.”

As an added bonus, here is a Ground Hog day card to Adler: 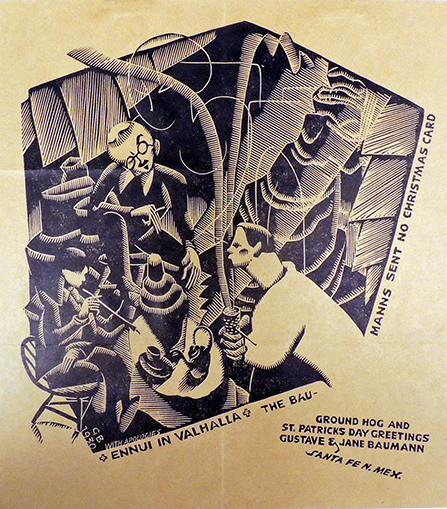