Before Working Girl, 9 to 5, The Mary Tyler Moore Show, or even Our Miss Brooks, which each featured single females in the mostly male world of business, there was the groundbreaking Winnie Winkle. She was the iconic working girl of the 20th century, who first appeared on September 20, 1920, in the comic strip Winnie Winkle, the Breadwinner, written and drawn by cartoonist Martin Branner. The 19th amendment granting women the right to vote in the United States had only been ratified a month earlier on August 18.

The comic strip was such a success in Chicago and New York City that the character continued to appear for more than seventy years, with the final strip published July 28, 1996. Needless to say, Winnie changed a great deal over the years, married, had children, lost husbands, ran her own company, and so on. For some, she was at her best in the original 1920s stories, when she worked as a secretary/stenographer for Mr. Bibbs. 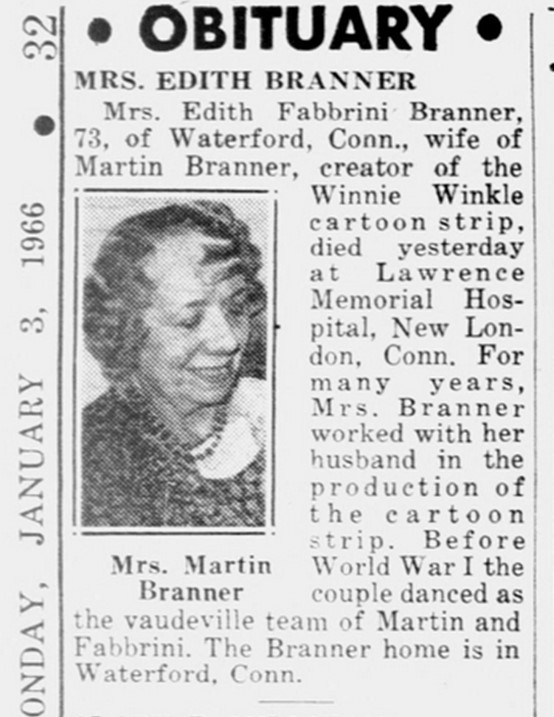 At home, Winnie’s mother worked equally hard while her father did all he could to avoid getting a job. He never tired of living off his daughter, just as her many bosses found ways to slack off while at the office. Surprisingly, Winnie was based on Branner’s own wife, “who worked with her husband in the production of the cartoon strip”:

“Winnie Winkle sprang from the pen of Connecticut’s Martin Branner, who drew his inspiration for the comic-strip beauty from his long-time wife Edith Fabbrini. The couple met when Martin was 18 and Edith 15. They married and for 15 years were headliners on the vaudeville circuit as the dance team Martin and Fabbrini. Martin left the theater to serve in World War I in the Chemical Warfare Service. Exhausted by tapping out two and three shows a day on the Keith Orpheum and Pantages vaudeville circuits, Martin (called Mike by his friends) began developing his talent for drawing. The couple hailed from New York, but settled in Waterford, Conn. One of their lasting legacies can be seen in the town’s seal, which the couple designed.”– https://www.newenglandhistoricalsociety.com/girl-power-born-1920-form-winnie-winkle-breadwinner/