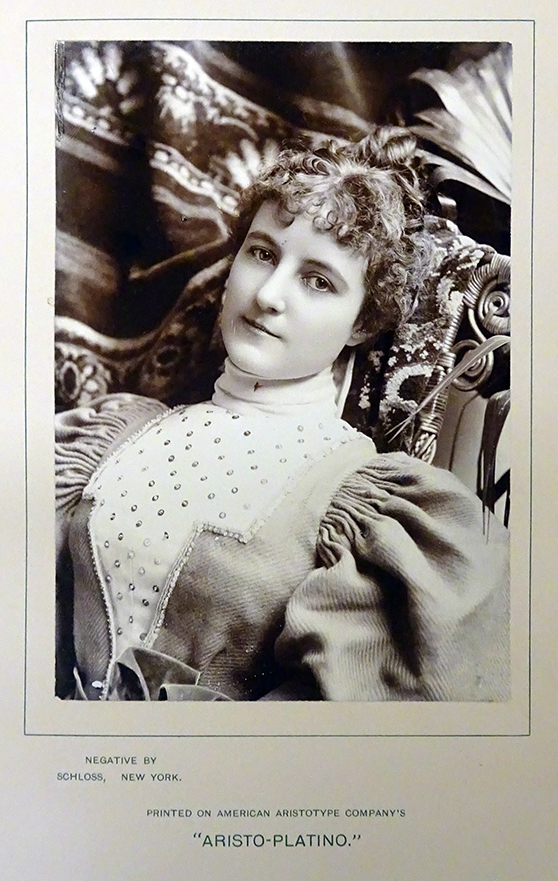 Although the use of collodion as a binder for photographic paper prints goes back to the 1860s, the commercialization of ready-to-use papers took longer to develop and to be accepted by American photographers. In 1884, the Germany manufacturer Paul Eduard Liesegang began selling a collodion emulsion printing out paper (POP) he called Aristotype. The name comes from the Greek aristos and rupos, that is, best type (read more: “Differences In Image Tonality Produced By Different Toning Protocols For Matte Collodion Photographs” by Sylvie Penichon –https://cool.culturalheritage.org/jaic/articles/jaic38-02-002_3.html). 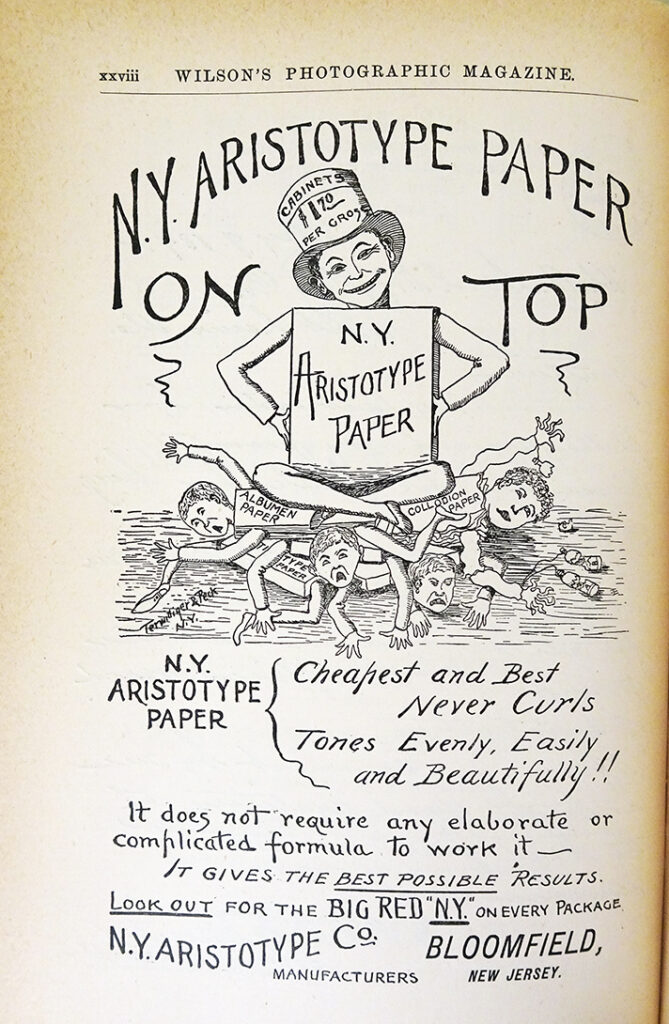 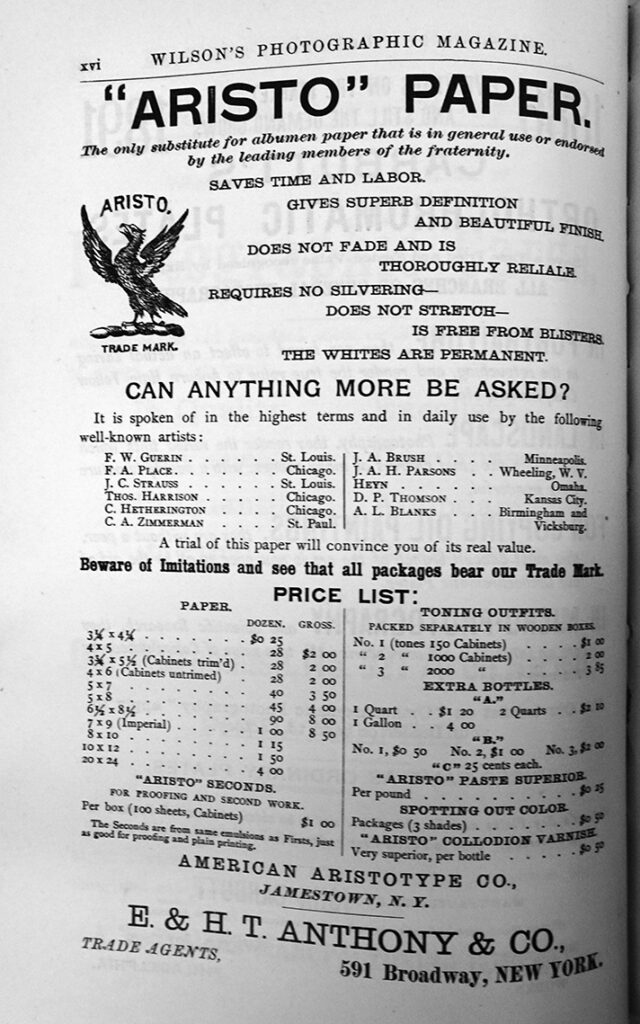 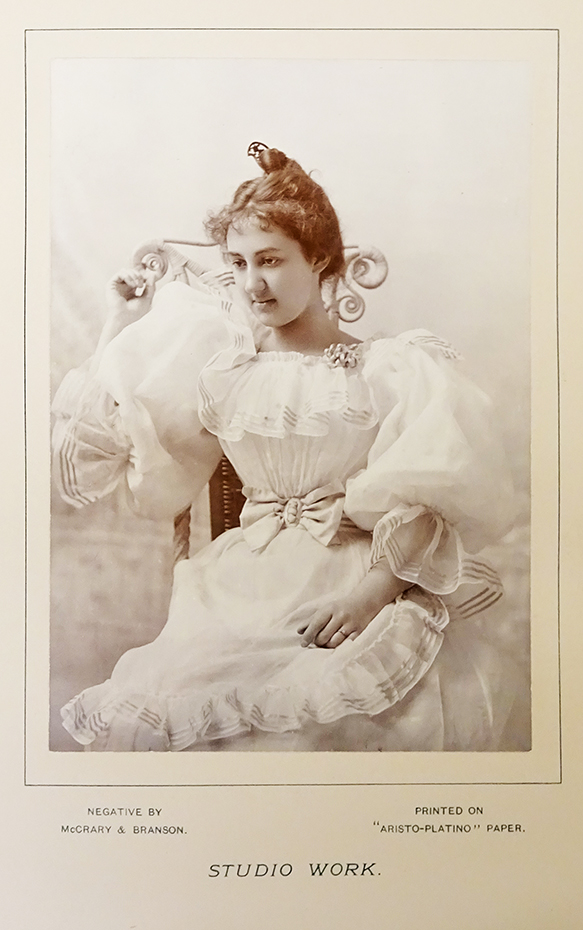 By the end of the 1880s, most photographers abandoned albumen papers for Aristotype papers, with Americans preferring collodion-chloride POP and Europeans using gelatin-chloride POP. This led to the formation of dozens of companies battling for dominance in the Aristotype paper market. Largest was the American Aristotype Company, formed in 1889 with E. & H. T. Anthony as their New York agent, along with the New York (later the New Jersey) Aristotype Company, the Nepera Chemical Company, the PhotoMaterials Company of Rochester, and of course the Eastman Kodak Company, among many others.

Eventually they were all bought out or merged or went bankrupt leaving Kodak as the single American producer. A lawsuit was filed claiming the company used criminal tactics to corner the market but by then, Kodak was too big to fail (see: United States v. Eastman Kodak Co., 226 F. 62, 71 (W.D.N.Y. 1915). Decided August 24 1915).

Wilson’s Photographic Magazine printed dozens of articles and recipes for differing paper chemistry, giving the American public a chance to see for themselves which brand or producer was preferred. In 1893, in particular, Wilson had multiple negatives printed on different papers and inserted them into each copy of the magazine, which had an edition close to 6,000 at that time. Princeton is fortunate to have issues with the photographs still intact, as many were removed by collectors. 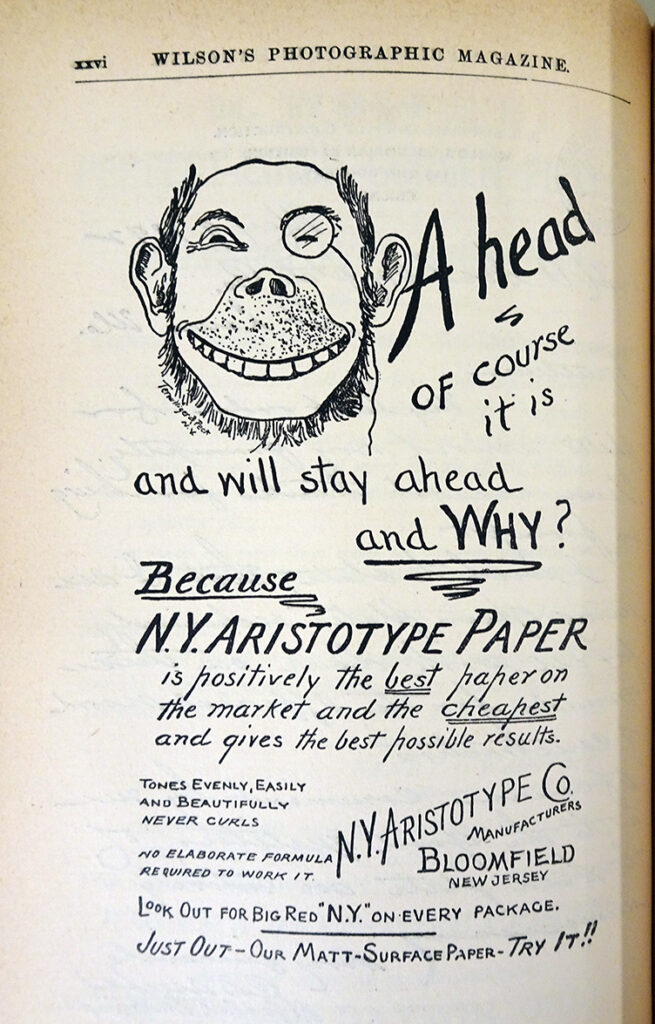 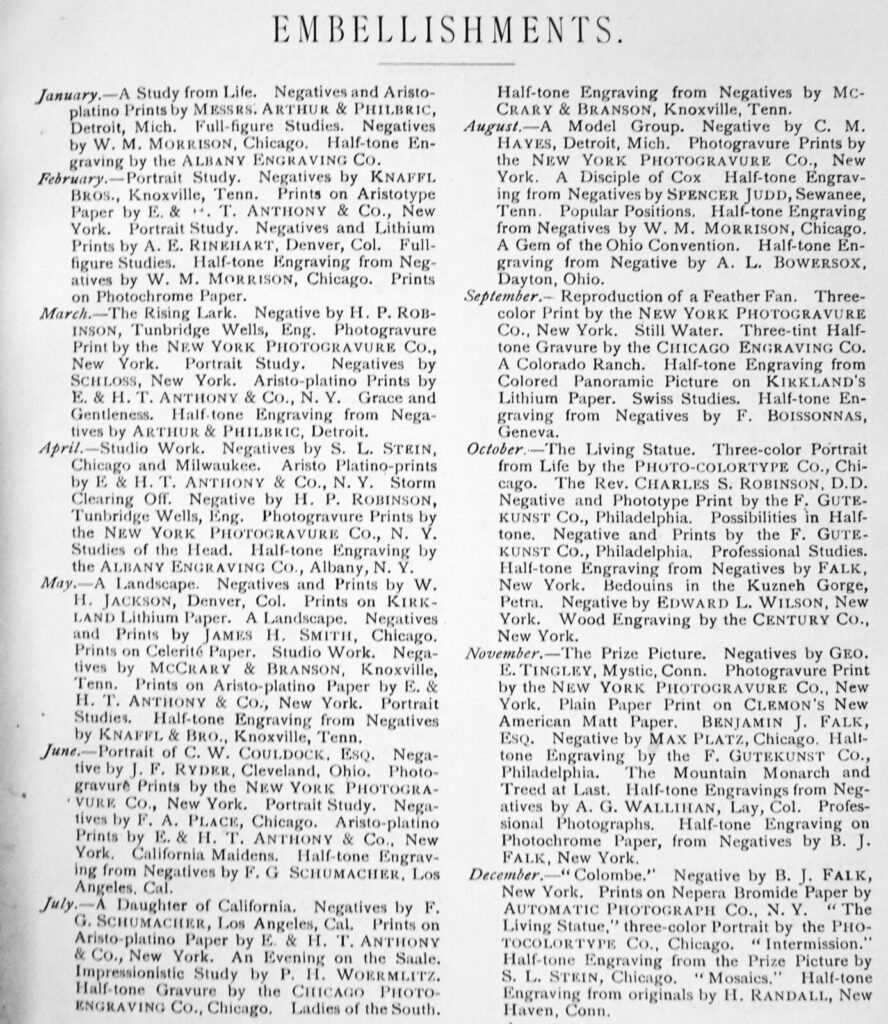 In addition to the prints, during the 1890s Wilson’s magazine included advertising by the various companies battling for the photographers’ attention. As seen above, American Aristotype Company used dry detailed listings of their prices, while the New York Aristotype Company hired the firm of Terwilliger & Peck to design humorous advertisements that changed frequently. One in particular shows the company man physically crushing his competitors, the uncomplicated drawing of the ad reflecting the uncomplicated use of their papers.

In 1925, the American Aristotype Company, by then a wholly owned subsidiary of Eastman Kodak, closed its plant for good and the heyday of Aristotypes ended. 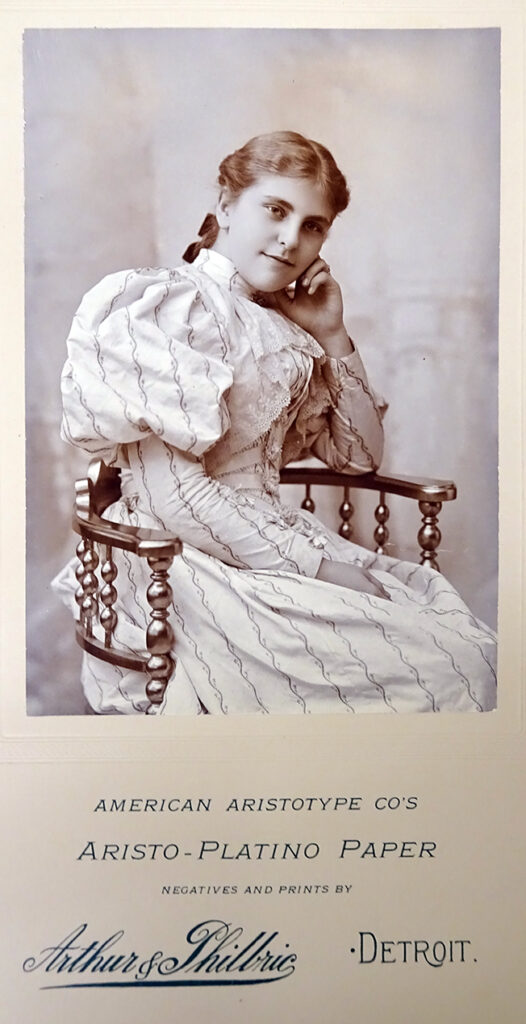 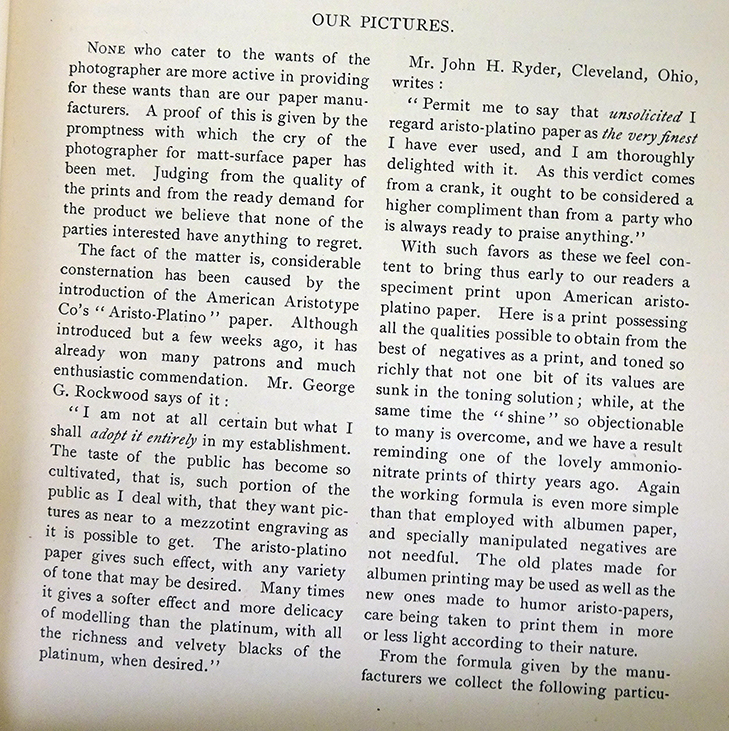 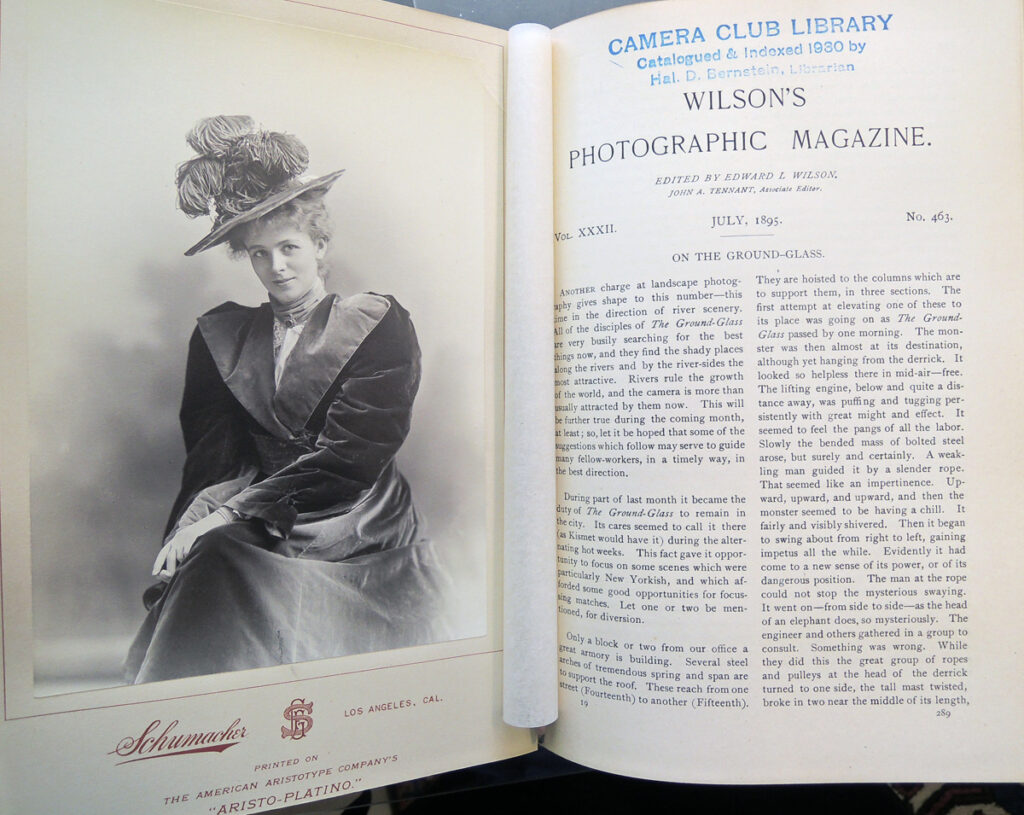