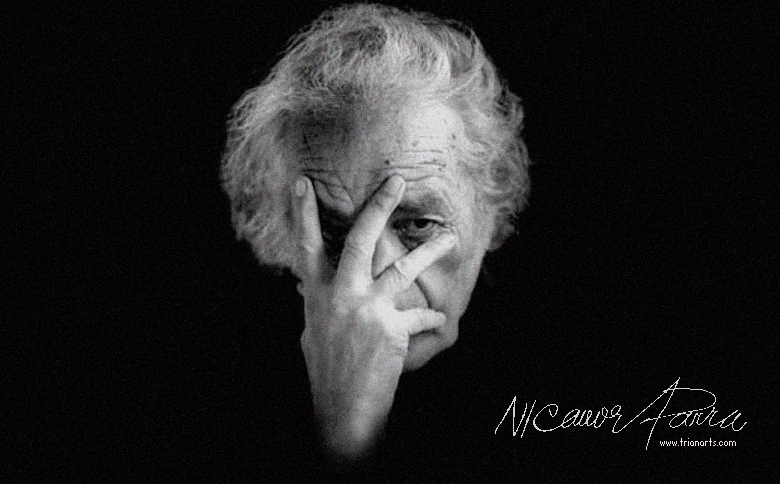 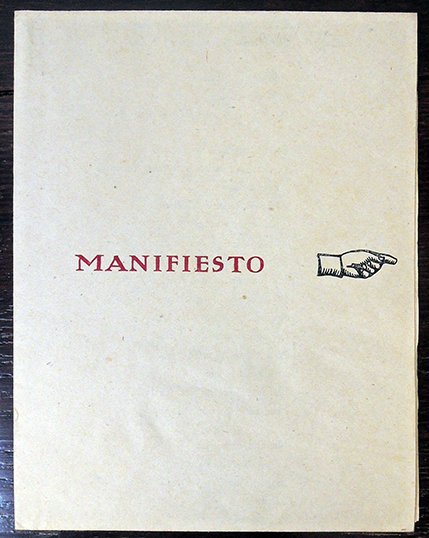 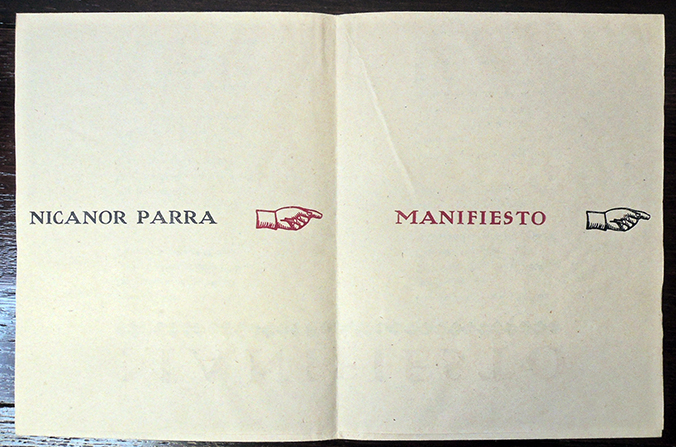 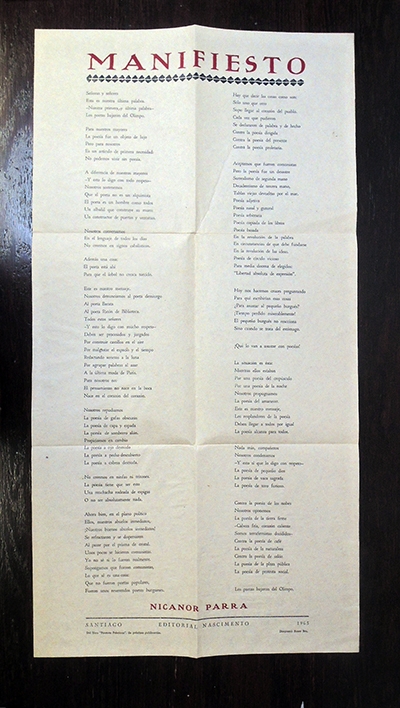 Manifiesto is considered the fifth collection of poems by Chilean writer Nicanor Parra, originally published in 1963 by Editorial Nascimento as a single sheet folded in two parts inside a cardboard folder.

When an individual is presented not with one, but two of the highest awards in literature for his work, as was the case with Nicanor Parra then the poet must be doing something right in order to achieve such a place of distinction. In 2011 the jury that awarded the Juan Rulfo Award to Nicanor Parra bestowed the award in recognition for his body of outstanding work which included the books Poemas y anti poemas, Versos de salon, Canciones rusas, and Otros poemas, as well as Prédicas del Cristo de Elqui, Nuevos sermones, and Artefactos and Ecopoemas.

In December of 2012 Parra received the Cervantes Prize, the Spanish-speaking world’s highest literary honor that a writer can receive. On this occasion, the Royal Highness Prince of Asturias said the following words of praise for the antipoet, “We salute and recognize in the anti-poet Nicanor Parra the alter ego and all that has been built up over the years, Don Quixote de Chile, Nicanor Parra.”–Nicanor Parra: The Physicist Who Made a Significant Contribution to the Literary World by Ruben E. Gonzalez; Delilah Dotremon. Alabama State University, Montgomery. Hipertexto 19 Invierno 2014 pp. 63-82

Ladies and gentlemen
This is our last word
– Our first and last word –
The poets have come down from Olympus.

For the oldest
Poetry was a kind of luxury
For us, however
First need is:
We can’t live without poetry.

Unlike the older ones
– And I say this with all due respect –
We support
That the poet is not an alchemist
The poet is a man, too
A builder who builds his wall:
A door and window manufacturer.

And something else:
The poet is here
So the tree doesn’t grow crookedly.

This is our message.
We denounce the poet creator
The cheap poet
The rat in the library poet.
All these gentlemen
– And I say this with all due respect –
Should be accused and judged
For building castles in the air
For waste space and time
Composing sonnets for the moon
For grouping words together at random
According to the latest Paris fashion.
For us not:
Thought is not born in the mouth
It is born in the heart of the heart.