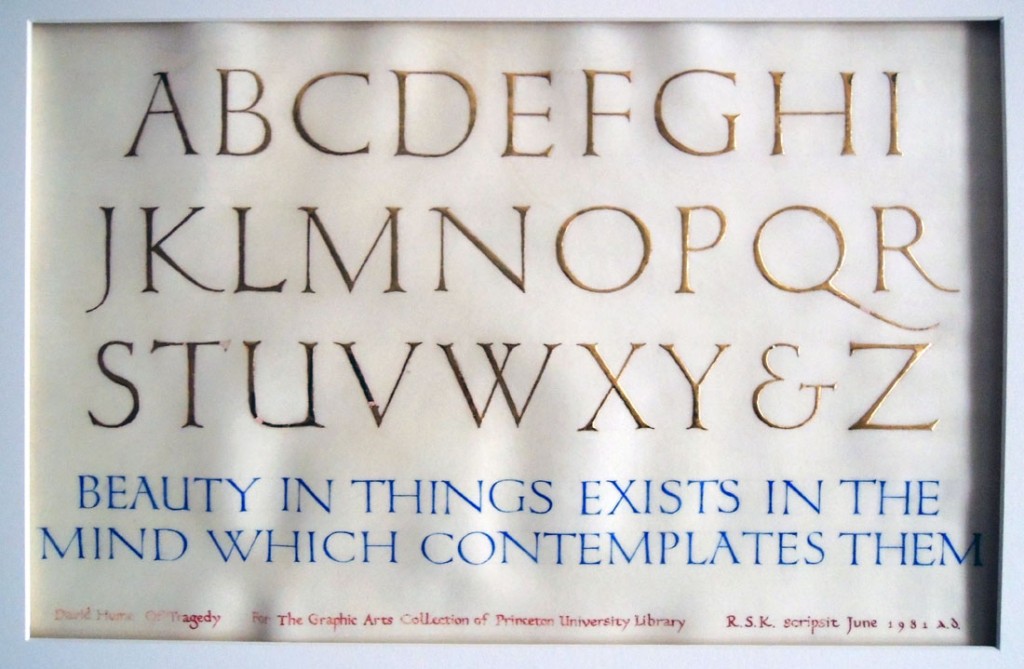 Richard Kinsey presented this alphabet lettered in burnished gold (chrysography) to the graphic arts collection in honor of an exhibition and catalogue on American Graphic Arts at Princeton University in 1981. The 26 letters are followed by a verse by philosopher David Hume (1711-1776), however not exactly from “Of Tragedy” as noted.

According to the Stanford Encyclopedia of Philosophy, “Despite his resignation from the Advocates’ Library and the success of his History, Hume’s work continued to be surrounded by controversy. In 1755, he was ready to publish a volume that included The Natural History of Religion and A Dissertation on the Passions as well as the essays “Of Suicide” and “Of the Immortality of the Soul.”

When his publisher, Andrew Millar, was threatened with legal action through the machinations of the minor theologian, William Warburton, Hume suppressed the offensive essays, substituting “Of Tragedy” and “Of the Standard of Taste” to round out his Four Dissertations, which was finally published in 1757.”

Our quote comes from “Of the Standard of Taste,” in a general form. The complete section reads: “Beauty is no quality in things themselves: It exists merely in the mind which contemplates them; and each mind perceives a different beauty. One person may even perceive deformity, where another is sensible of beauty; and every individual ought to acquiesce in his own sentiment, without pretending to regulate those of others.” (Hume 1757, 136)