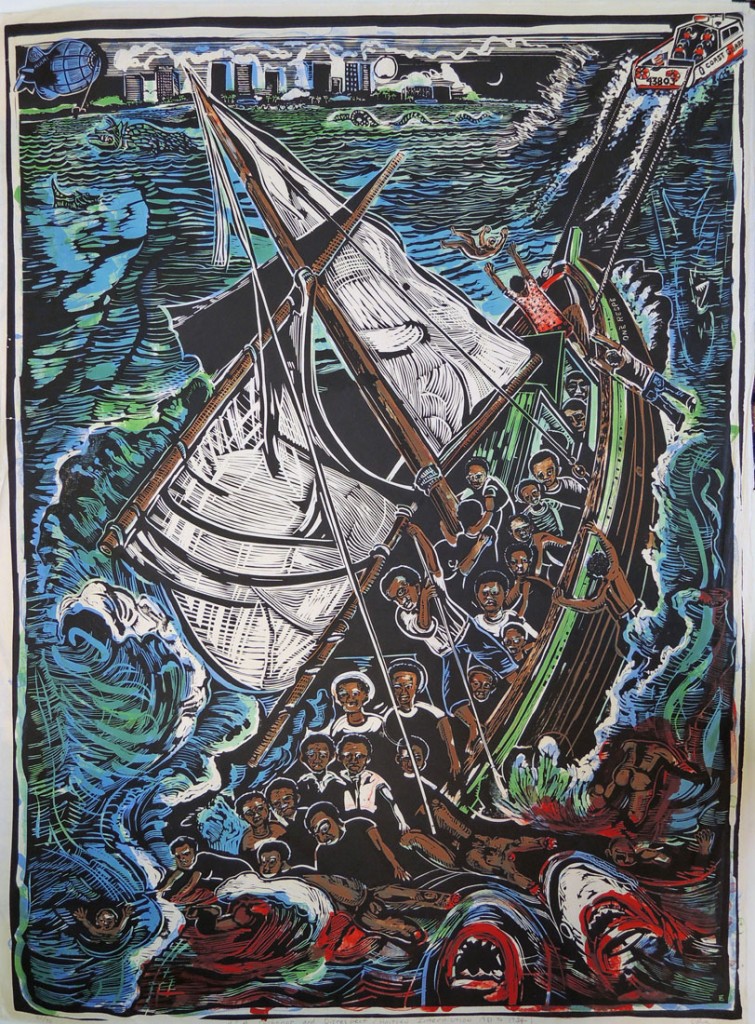 We are delighted to have several new prints and artists books in the Graphic Arts Collection by Eric Avery, a Texas physician/artist who moved to New Hope in 2013 after retiring from working as a psychiatrist in a large HIV/AIDS clinic for twenty years. Doctor Avery has made a career incorporating his medical practice with his activist art, delving into such themes as infectious diseases, human rights abuse, and the death penalty, among others. Many of his complex prints appropriate one or more iconic art historical images into contemporary events. Here are a few examples now at Princeton University.

On July 14, 1990, The New York Times reported, “Bahamas Facing More Questions As It Buries 39 Drowned Haitians.” The story continued “Thirty-nine Haitians fleeing their impoverished Caribbean island drowned when their sailboat capsized and sank in choppy seas while being towed by Bahamian authorities, Government officials said. No explanation for what caused the sinking was given.”

Published by the Tamarind Institute, Avery’s complex linocut [above] incorporates the facts of the 1990 tragedy with three separate art historical paintings: Theodore Gericault’s The Raft of the Medusa, 1824; John Singleton Copley’s Watson and the Shark, 1778; and Rembrandt’s Christ in the Storm on the Sea of Galilee, 1633. 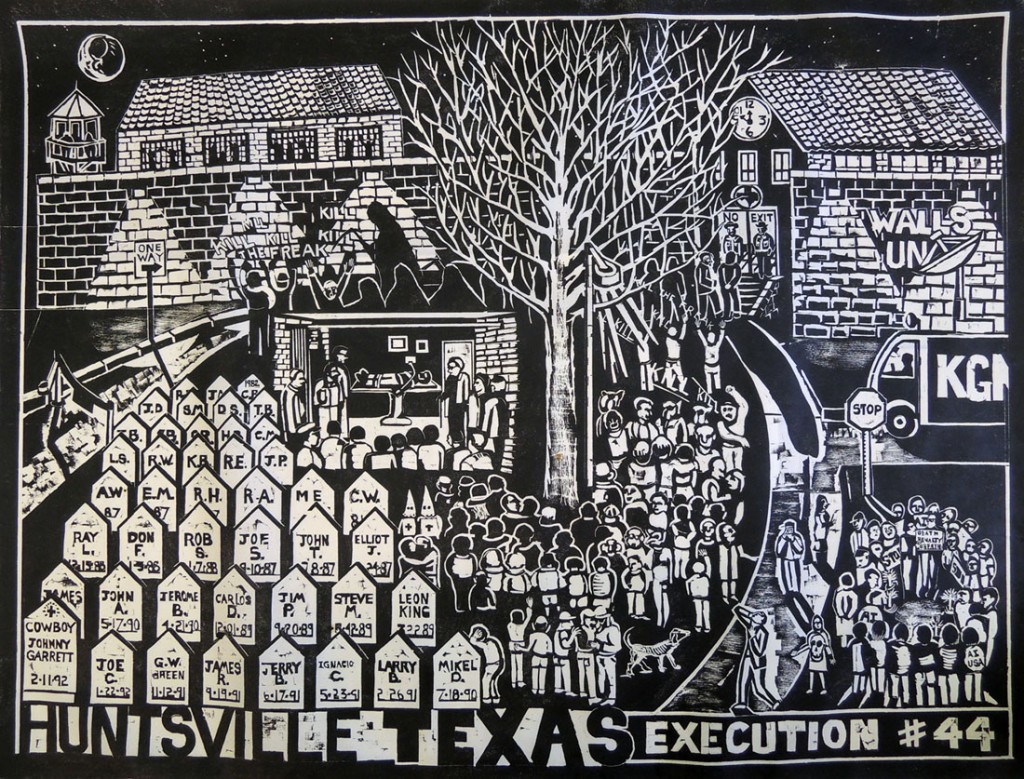 This print (and the Haitian Boat print above) were done when Dr. Avery was working as Amnesty international USA volunteer coordinator of AI’s refugee work in the Southern Region of the US. The theme of this woodcut is the execution of Johnny Frank Garrett, who was just 17 years old when he committed the brutal murder that sent him to death row. Amnesty International secretariat Mandy Bath described Garrett as “chronically psychotic then, a victim himself of unspeakable brutality throughout his childhood and formative years.”   http://docart.com/catalog/Garrett.html 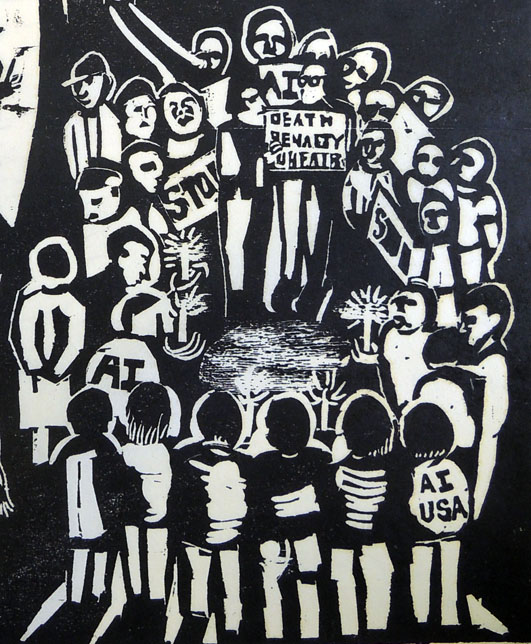 Avery writes “This woodcut depicts the scene outside the Texas Department of Corrections Walls Unit in Huntsville, Texas where Texas executes prisoners. In 1992, I along with about 20 Amnesty International members gathered outside the unit to protest the execution of Johnny Garrett. We are the group on the right side of the print. Under the winter tree, about 80 college students had come to celebrate the execution, to taunt us and to gloat over Johnny’s fate. The students were chanting “Kill the freak who killed the nun.” 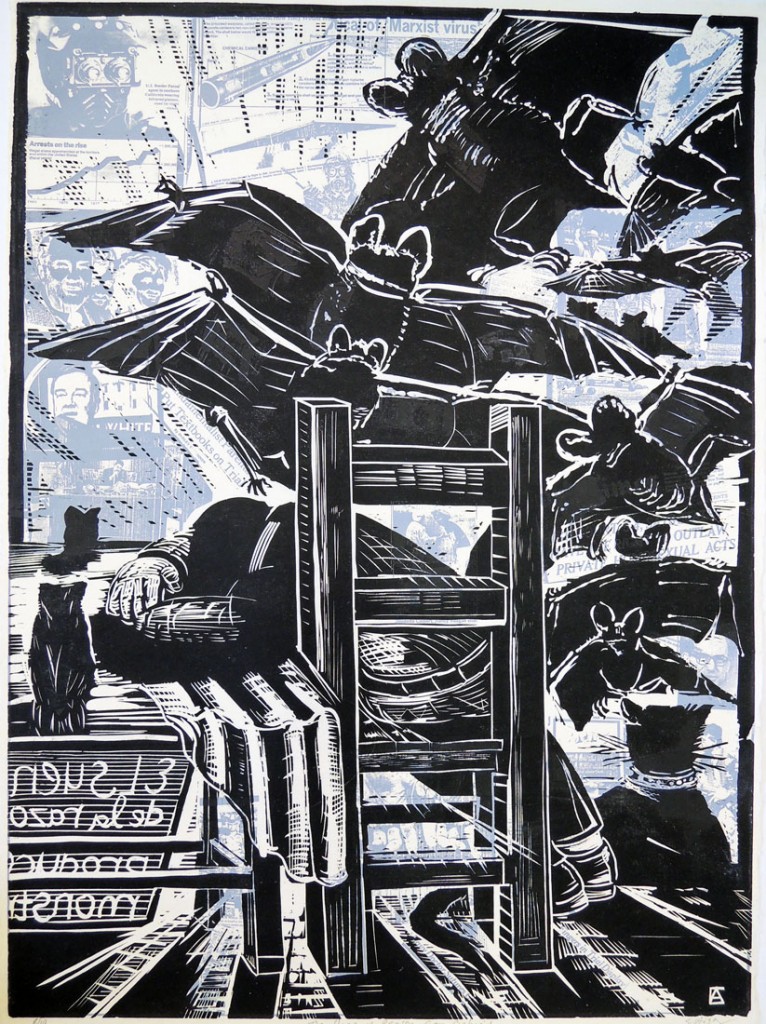 Avery writes, “In 1986, I appropriated Goya’s The Sleep of Reason to make a poster for the 15th ACLU Liberty Gala. I imagined myself standing inside Goya’s print, looking out at events (monsters) in 1986.”

“In the 1980’s I worked with Amnesty International USA on refugee problems in the United States. I am the slumped figure you see from the back in my print, exhausted from struggling with the human rights abuses happening in my world. During this time, many refugees were fleeing to the US from war in Central America. I lived near one of these refugee prisons in South Texas and had firsthand knowledge about effects of US policy had on refugee lives.”

“Many refugees were fleeing for their lives. Some had evidence of having been tortured. The United States Immigration and Naturalization Service was sending these people back to Central America. Amnesty International opposes returning refugees to countries where they face torture or execution. I worked against the INS policy and helped organize a community based refugee legal aid project in Laredo, Texas.”

“This was during the time Ronald Reagan was President. His Attorney General (also head of INS) was Ed Meese. The Border Patrol used night vision goggles, a new tool. The military establishment flourished during the eight years of the Reagan administration. An increasingly conservative Supreme Court supported States rights to ban private homosexual acts.”

“When you look at the print starting in upper right (Ronald Reagan swimming), and look clockwise – under Reagan are White South African Lawn Bowlers, New York Times headlines about Supreme Court banning homosexual acts, abortion protest. At the bottom, in El Salvador, hands are tied together by thumbs. Moving to lower left, an El Salvador military officer. At 9 o’clock is Reagan at his desk, Ed Meese above him (positive and negative images). In upper left is night vision goggles on Border Patrolman, then chemical weapons. In the center of the print is Nancy Reagan and Claudette Colbert playing on the beach.”
For more information: http://docart.com/catalog/sleep_of_reason.htm 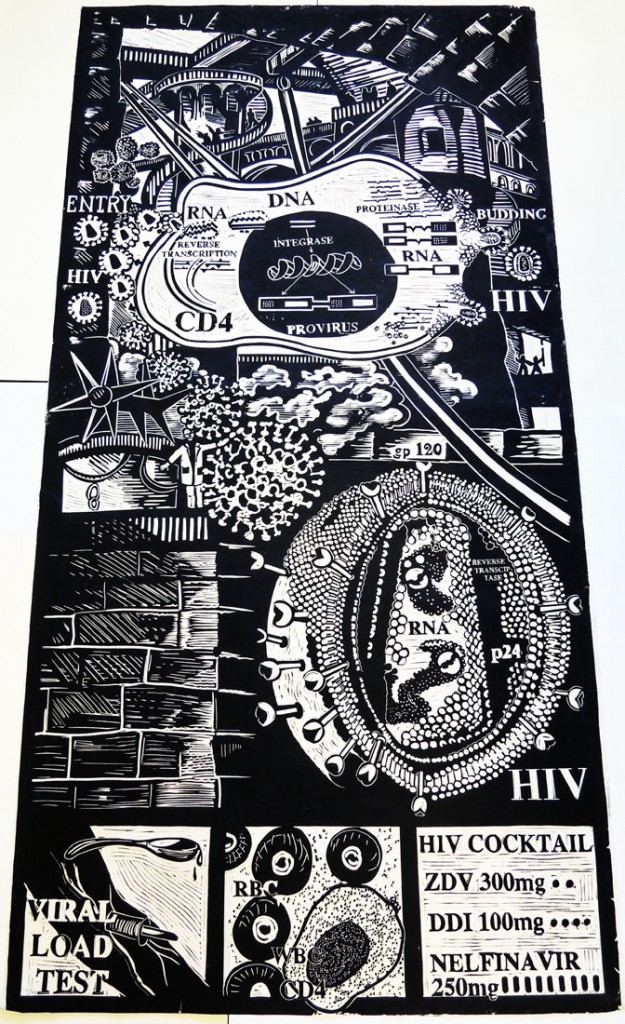 Dr. Avery writes, “After the Amnesty International human rights work, with my friends beginning to die form AIDS, I returned to medicine. I think it is important to contextualize my art/medicine in my academic medical and medical humanities career a the University of Texas Medical branch Galveston, where I was Clinical Associate Professor of Psychiatry and Member, Institute for the Medical Humanities.”

The Life Cycle of HIV was an art medicine action for 1997 World AIDS Day. The print also appears on the back cover of Pictures That Give Hope, which was printed in large editions and used in a number of US prison systems. 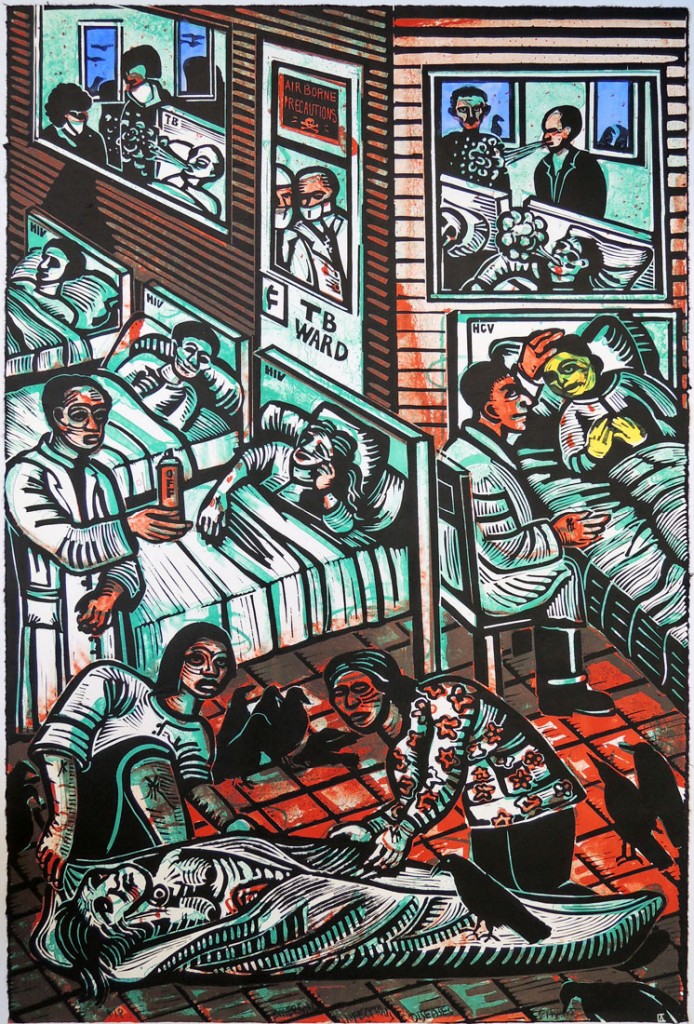 Emerging Infectious Diseases shows the vulnerable body infected by multi-drug resistant T.B., HIV, Hepatitis C and the very new United States infection West Nile Encephalitis.The print emerged after the West Nile Virus outbreak in NYC in 1999. This was the first time this virus was detected in the Western Hemisphere.

The image source for this print is a rare French woodcut that accompanied the poem “La Complainte et Epitaph de feu Roy Charles” in Octovien Saint-Gelais (1468-1502), Le vergier d’honneur, nouvellement imprimé à Paris… [Paris, ca. 1500], unfortunately not in the Princeton University Library. “The sick man is attended by a physician, the man receiving spiritual consolation, the corpse being prepared for burial, and the well man, about to leave, receiving a word of advice from a physician in the background.” –Carl Zigrosser, Ars Medica, 1959.
For more information on Eric Avery and his work, visit www.docart.com