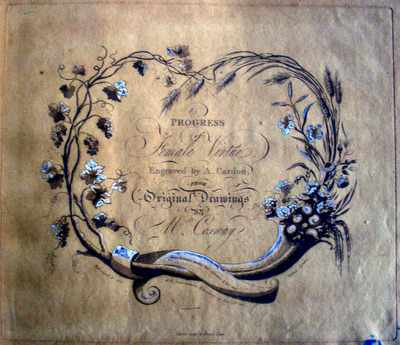 Recorded in the Proceedings of the Old Bailey, 1674-1913, copper plates belonging to the engraver John Girtin were stolen on December 8, 1807 by Richard Wells. The following is a transcription of the trial:

JOHN GIRTIN. Q. What are you. – A. I am an engraver and printer.
Q. On the day of the indictment, did you employ your boy to bring some copper plates from the City to your house. – A. Yes, to No. 8, Charles-street, Middlesex hospital; it was on the 8th of December.

JOHN BANYARD. Q. Are you errand boy to the prosecutor. – A. I am. On the 8th of December, I went in the city to get some plates to carry to my master’s house; I got thirteen plates in the City, about six o’clock in the evening; when I got into Holborn, just by Red Lion-street, the prisoner asked me which was Oxford-road; I told him I was going to Oxford-road, I would shew him; he asked me to let him carry the plates; I delivered them to him; as soon as we got a little way up Holborn, I asked him where the plates were; he said he had got them under his coat; I asked him to give them to me, he said he would not, he would carry them a little farther for me; when I came to Southampton-street, I told him I was going up that way; he said, so am I; as soon as we got up a few doors in Southampton-street, he said, there are your plates, he fell down then he got up and ran away.

Q. Were your plates on the ground. – A. No; I cried stop thief, he was pursued and taken by Mr. Carpmeal; I never lost sight of him from the time he stumbled till the time he was taken; I was close to his heels. There was no plates found on him. There was a man walking close by the side of the prisoner as we were going up Holborn; I lost sight of that man.

Q. Had you an opportunity of seeing whether the prisoner gave the plates to any body. – A. No, the plates have never been found.
Court. When you gave him the plates how did he carry them. – A. Under his arm. I missed them from under his arm; then he said he had got them under his coat.

Q. Have you any doubt the prisoner at the bar is the man. – A. I am sure he is the man.

JAMES CARPMEAL. Q. In consequence of hearing the cry of Stop Thief, did you apprehend the prisoner. A. I assisted; he was running; I apprehended him two doors from Little Queen-street, Holborn; the boy was close to his heels. There was nothing found upon him but three pair of upper leathers, belonging to some shoemaker.
THOMAS FOSSIT. Q. Did you assist in stopping the prisoner. – A. I stopped him; the boy was close to his heels.
The prisoner left his defence to his counsel; called two witnesses, who gave him a good character.
GUILTY, aged 29. Transported for Seven Years.