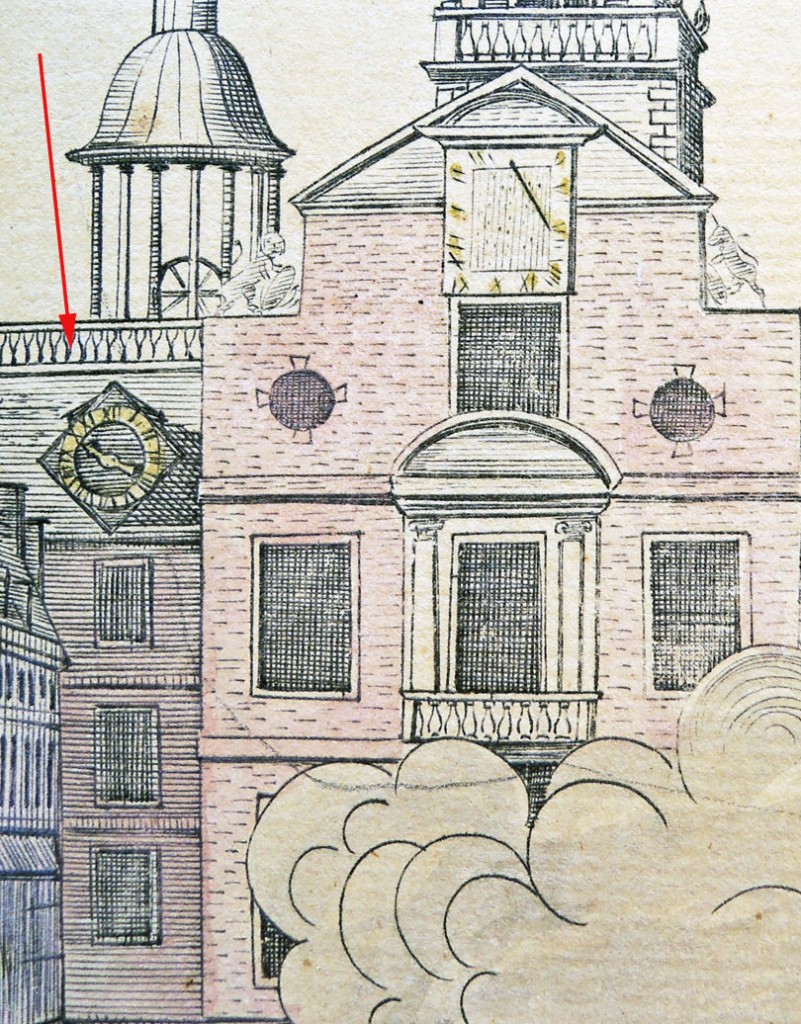 On March 28, 1770, just three weeks after the battle we now call the Boston Massacre, Paul Revere published an engraving of the bloody scene. The week before, Henry Pelham had shared with Revere a depiction of the battle that he was planning to publish. Revere copied the picture, engraved it, and published it under his own name, working quickly to get it out before Pelham finished his print.

As we all know, when you work too quickly you make mistakes. Revere got the time on the clock wrong and didn’t catch the error until a few impressions had already been pulled. He took back the plate, changed the time to 10:20, and finished the print run. This second state of the first edition is the print now held at Princeton University.

Pelham did complain about this piracy, writing to Revere on March 29, “When I heard that you was cutting a plate of the late Murder, I thought it impossible as I knew you was not capable of doing it unless you coppied it from mine and I thought I had intrusted it in the hands of a person who had more regard to the dictates of Honour and Justice than to take the undue advantage you have done of the confidence and trust I reposed in you.” Pelham’s letter was published in the Proceedings of the Massachusetts Historical Society, 2nd series, volume 8 (1892-1894), page 227. Firestone Library Recap F61 .M377.

Note that Revere only claims to have engraved, printed, and sold the print, not to have designed or drawn the image. 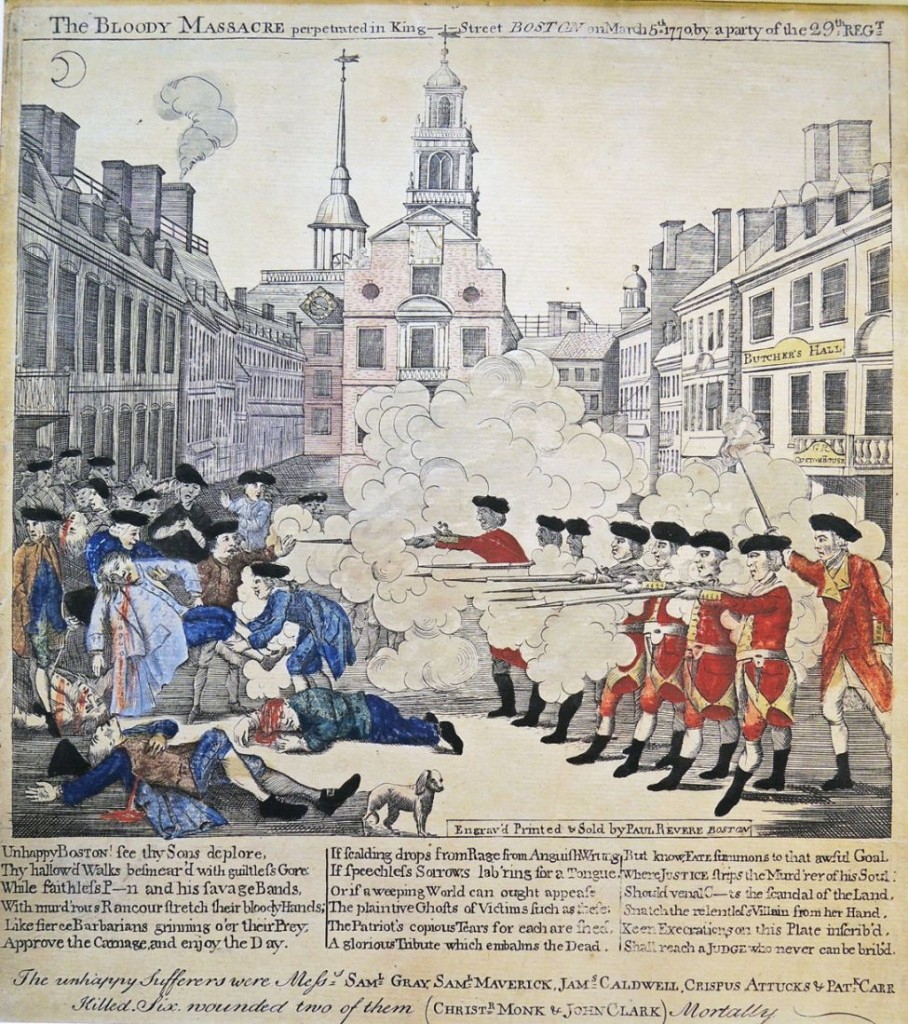 “Unhappy Boston! See thy Sons deplore. Thy hallow’d Walks besmear’d with guiltless Gore. While faithless P-n and his savage Bands. With murd’rous Rancour stretch their bloody Hands; Like fierce Barbarians grinning o’er their Prey, Approve the Carnage and enjoy the Day. If scalding drops from Rage from Anguish Wrung if Speechless Sorrows lab’ring for a Tongue, or if a weeping World can ought appease The plaintive Ghosts of Victims such s these; The Patriot’s copious Tears for each are shed, a Glorious Tribute which embalms the Dead. But know Fate summons to that awful Goal, Where justice strips the Murd’rer of his Soul; Should venal C-ts the scandal of the Land, Snatch the relentless Villain from her Hand, Keen Execrations on this Plate inscrib’d Shall reach a Judge who never can be brib’d.”

Note the unharmed dog. It has been suggested that Revere was showing that the British treated the dog better than the American colonists. 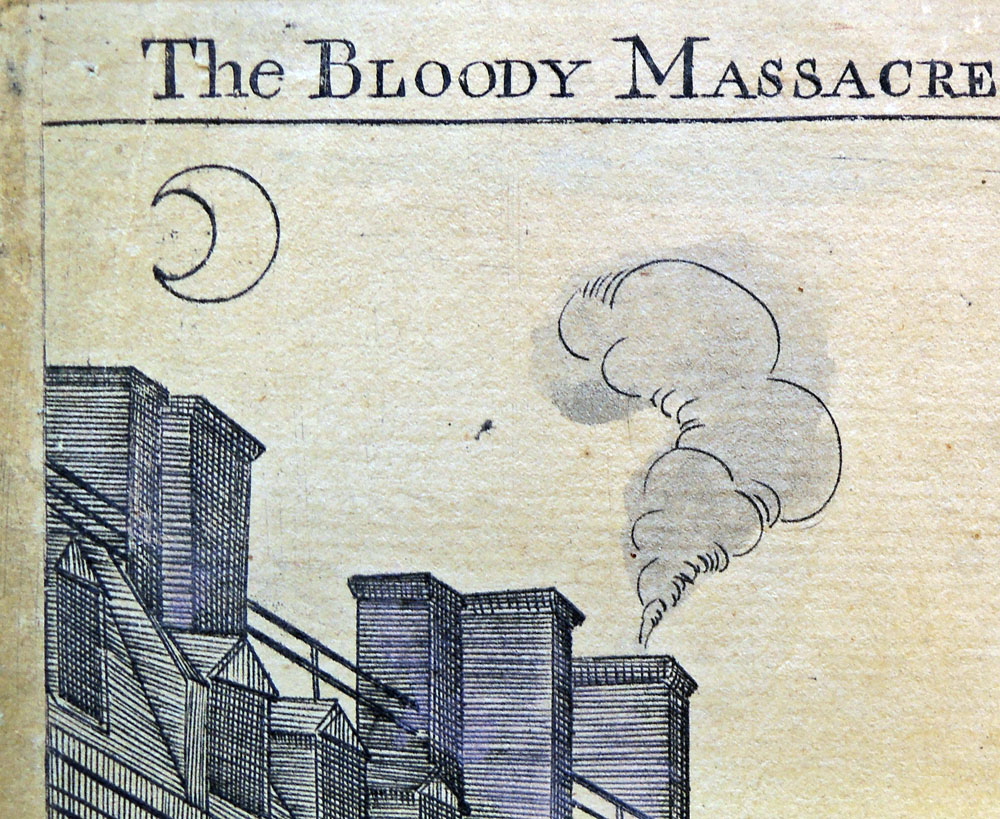 In Pelham’s print, the moon in the top left-hand corner faces to the right, whereas it faces to the left in Revere’s version. 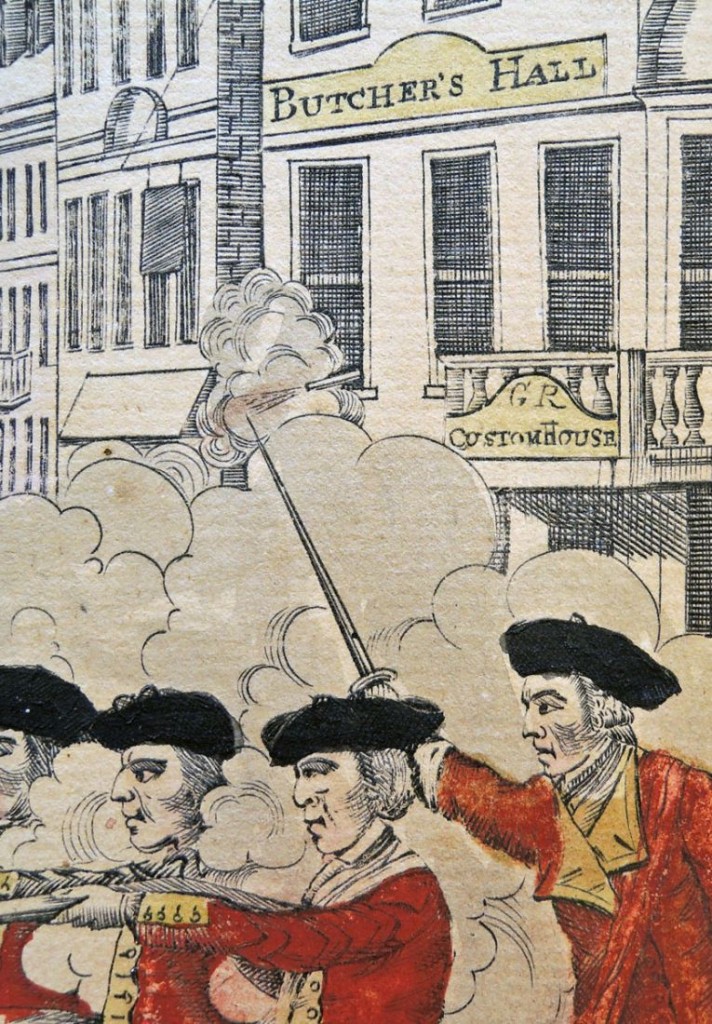 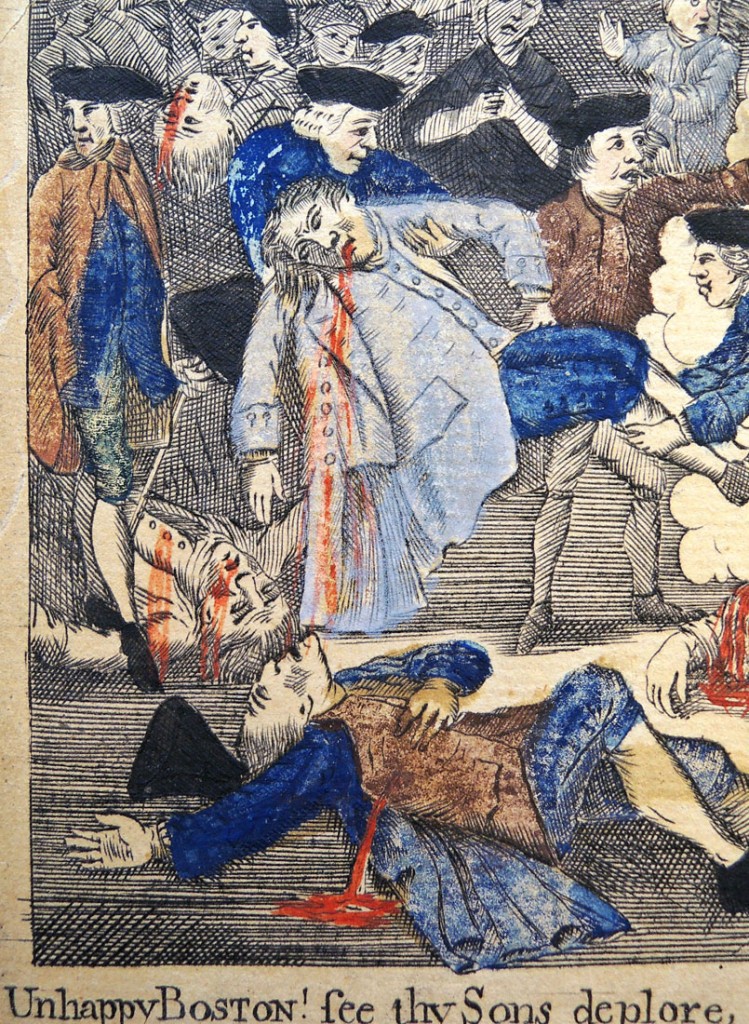 The Red Coats are placed under the sign “Butcher’s Hall.”

There are many variations of this scene. A wonderful page comparing various Boston massacre prints has been mounted by the Boston Historical Society: http://www.masshist.org/features/massacre/comparison 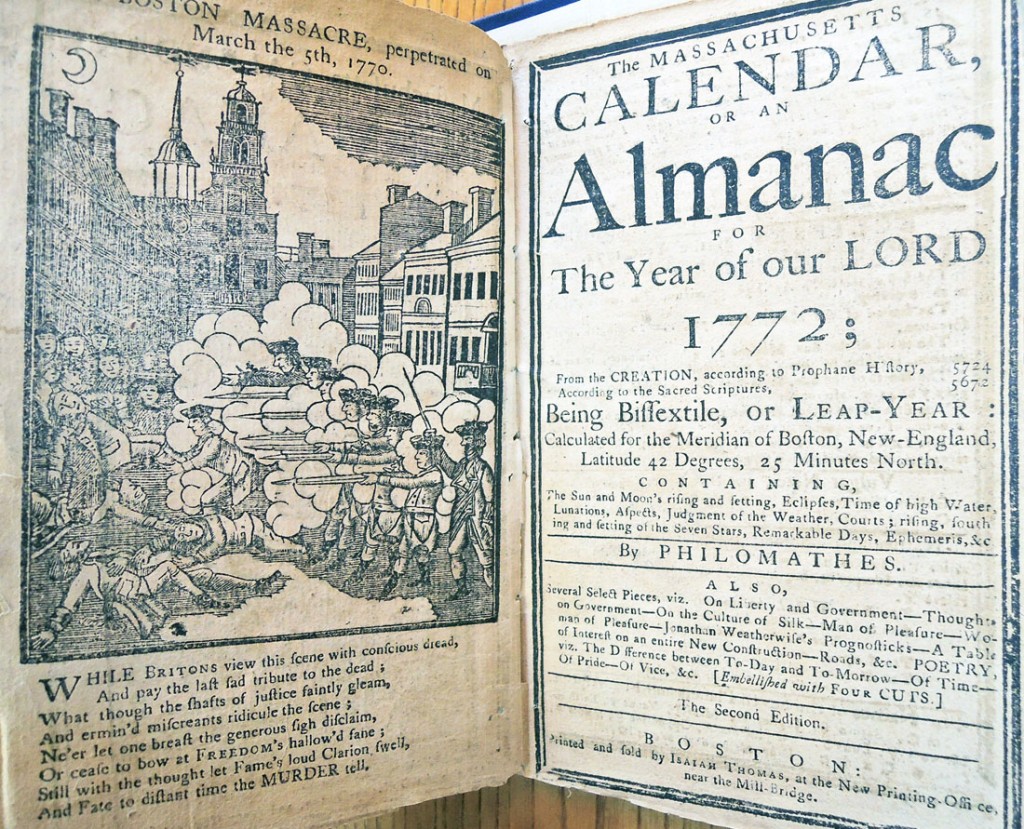 See also Philomathes, The Massachusetts Calendar, or an Almanac for the Year of Our Lord 1772 … 2nd ed. Boston: [s.n., 1772?]. Woodcut of the Boston massacre after Paul Revere’s engraving of 1770. Philomathes is a pseudonym of Ezra Gleason. Graphic Arts Collection (GAX) Hamilton 59. 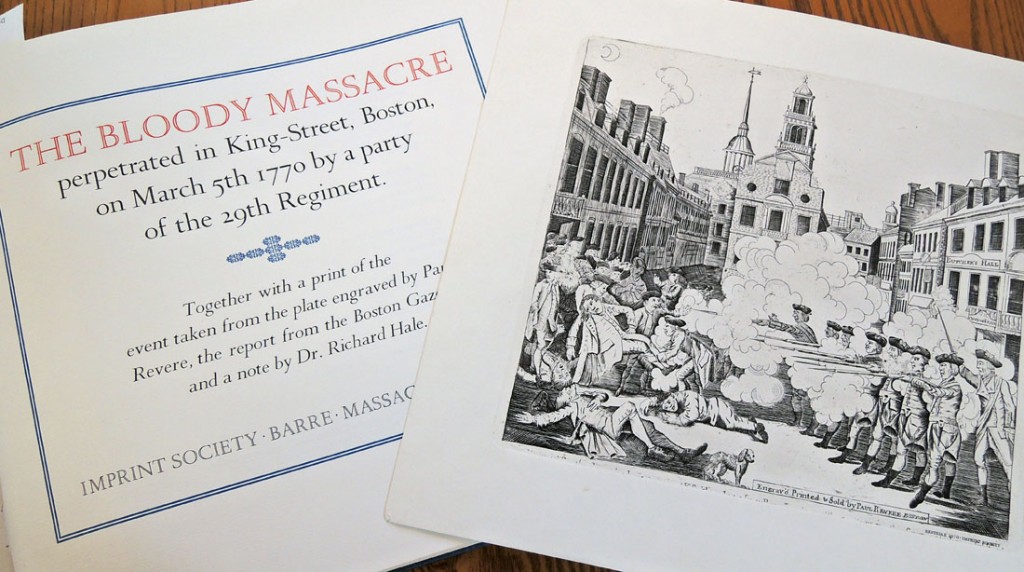