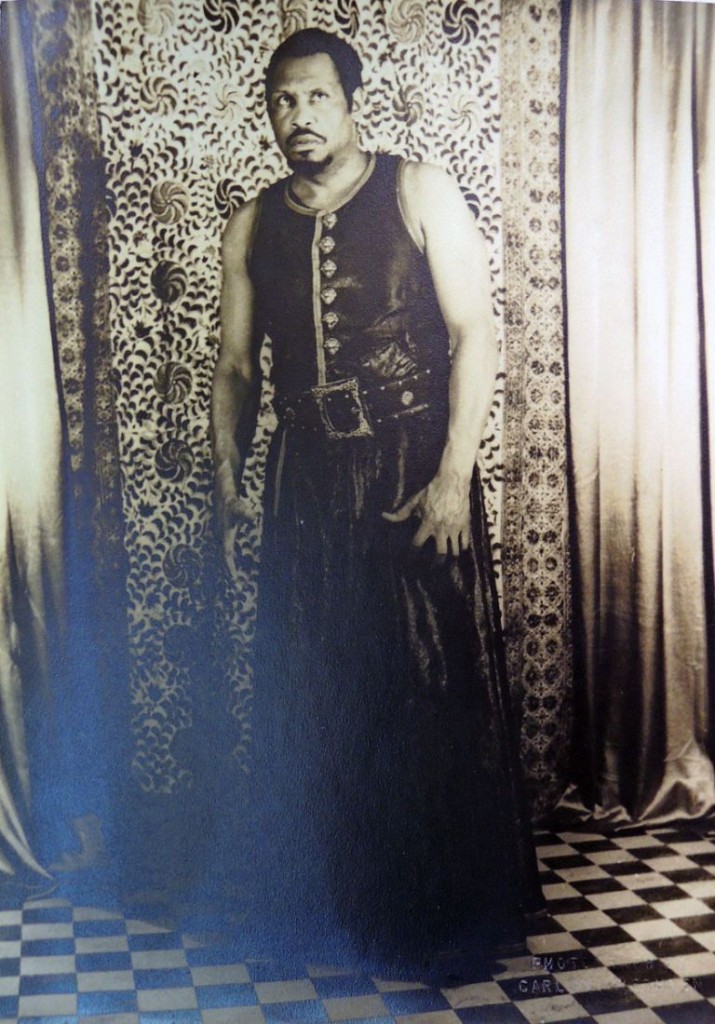 The Graphic Arts Collection recently acquired this photograph of Paul Robeson (1898-1976) taken by Carl Van Vechten (1880-1964) on June 1, 1944. Robeson is posing in his costume for a production of Othello. The print will be on view this fall at the Princeton University Art Museum in our exhibition “Remember Me” in honor of Shakespeare’s anniversary.

“Paul Robeson returns to Princeton, where he grew up, this evening as star and titled player of Margaret Webster’s new production of Shakespeare’s Othello, which opens at 8:40 in McCarter Theatre as the seventh and next to last production of Richard Skinner’s Princeton Playgoers for this season. This week’s presentation in McCarter marks the only performance by Mr. Robeson of Othello in this area. … Margaret Webster … will play the part of Emelia. Jose Ferrer ’33 … has been cast as Iago. His wife, Uta Hagen … will be Mr. Robeson’s Desdemona. Miss Webster’s company includes Philip Huston, William Widdecombe, William Woodson, George Keane, Ernest Graves, Alfred Etcheverry, Russell Collins, John Ireys and Robert Harrison.”

“Mr. Robeson … was born and grew up in Princeton. He attended elementary school and high school here, before graduating from Rutgers University with a Phi Betta Kappa key. … Alexander Woollcott, as dramatic critic of the old New York World, said of Robeson that ‘of all the countless people I have known in my wanderings about the world, Robeson is one of the few who, I would say, had true greatness.’”

The Mudd Library holds the records of the Princeton Playgoers, 1941-1942 [Mudd AC315], including Othello. Their record notes “Princeton Playgoers, Inc. was a theater production company formed in 1942, during the wartime period when the engagements of Triangle Club were limited. The records consist of financial records, correspondence, records of ticket sales, advertisements, contracts, and other materials documenting the planning and production of plays at McCarter Theatre in the summer of 1942.”