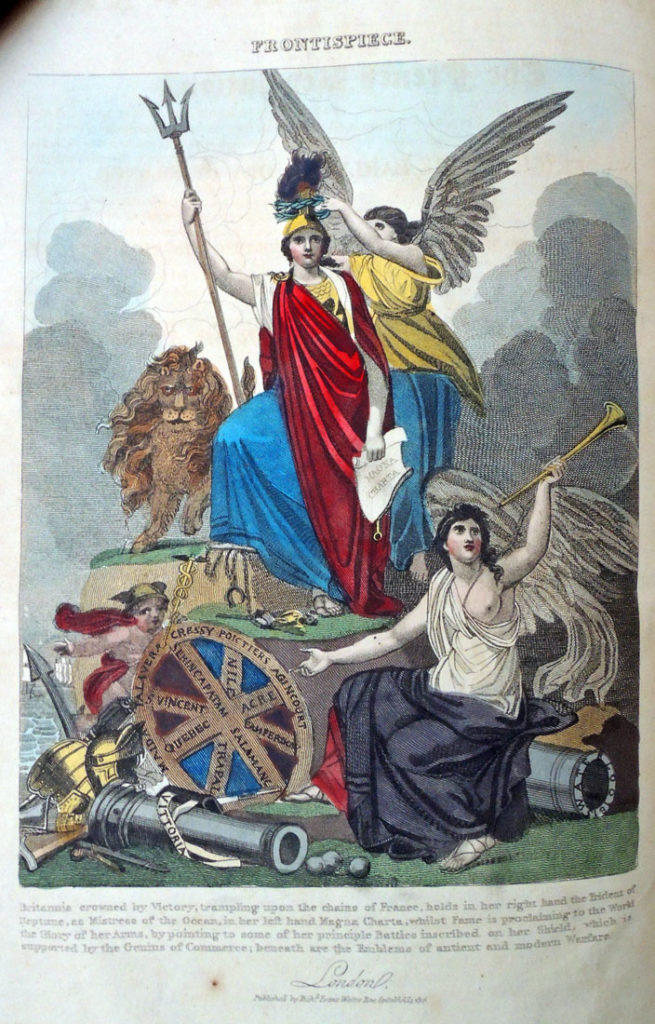 “Britannia crowned by Victory, trampling upon the chains of France, holds in her right hand the Trident of Neptune, as Mistress of the Ocean, in her left hand Magna [Carta], whilst Fame is proclaiming to the World the Glory of her Arms, by pointing to some of her principle Battles inscribed on her Shield, which is supported by the Genius of Commerce; beneath are the Emblems of ancient and modern Warfare. London published by Rich. Evans…” 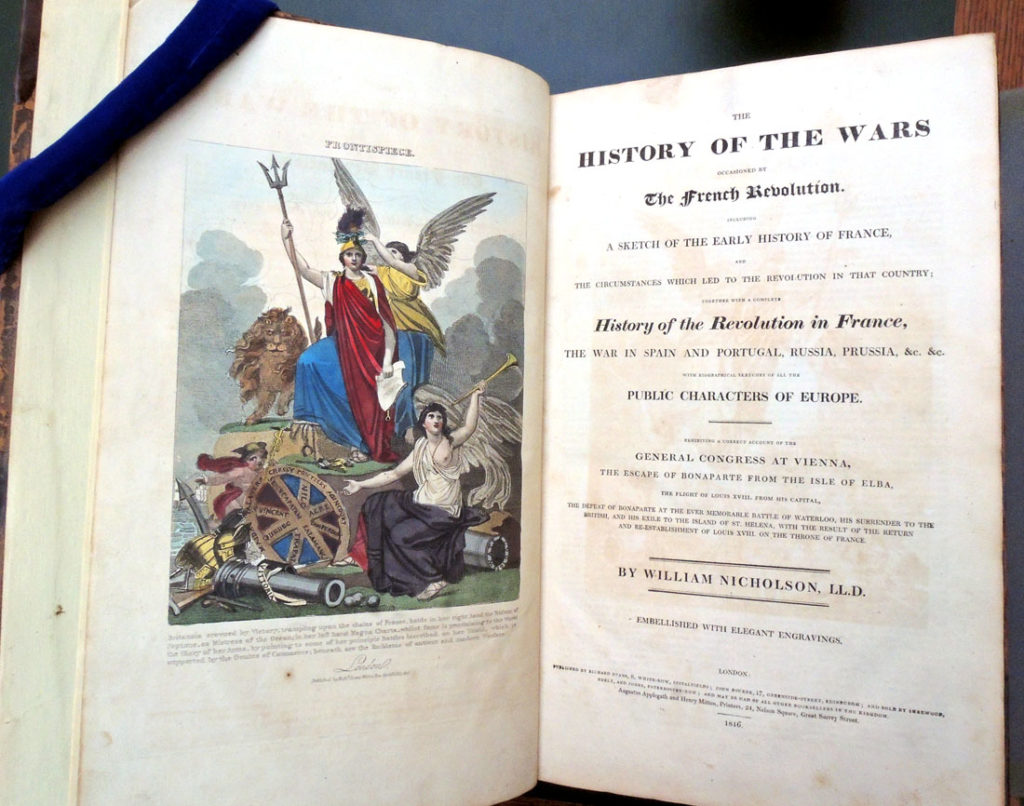 William Nicholson, The History of the Wars Occasioned by The French Revolution. Including A Sketch of the Early History of France, and the Circumstances which Led to the Revolution in that Country; Together with a Complete History of the Revolution in France, The War in Spain and Portugal, Russia, Prussia, &c. &c. Exhibiting a Correct Account of the General Congress at Vienna, the Escape of Bonaparte from the Isle of Elba, the Flight of Louis XVIII. from his Capital, the Defeat of Bonaparte at the Ever Memorable Battle of Waterloo, his Surrender to the British, and his Exile to the Island of St. Helena, with the Result of the Return and Re-establishment of Louis XVIII. on the Throne of France (London: Richard Evans Whites Row Spitalfields, 1816). 22 stencil colored wood engravings. Graphic Arts Collection GAX 2018- in process. 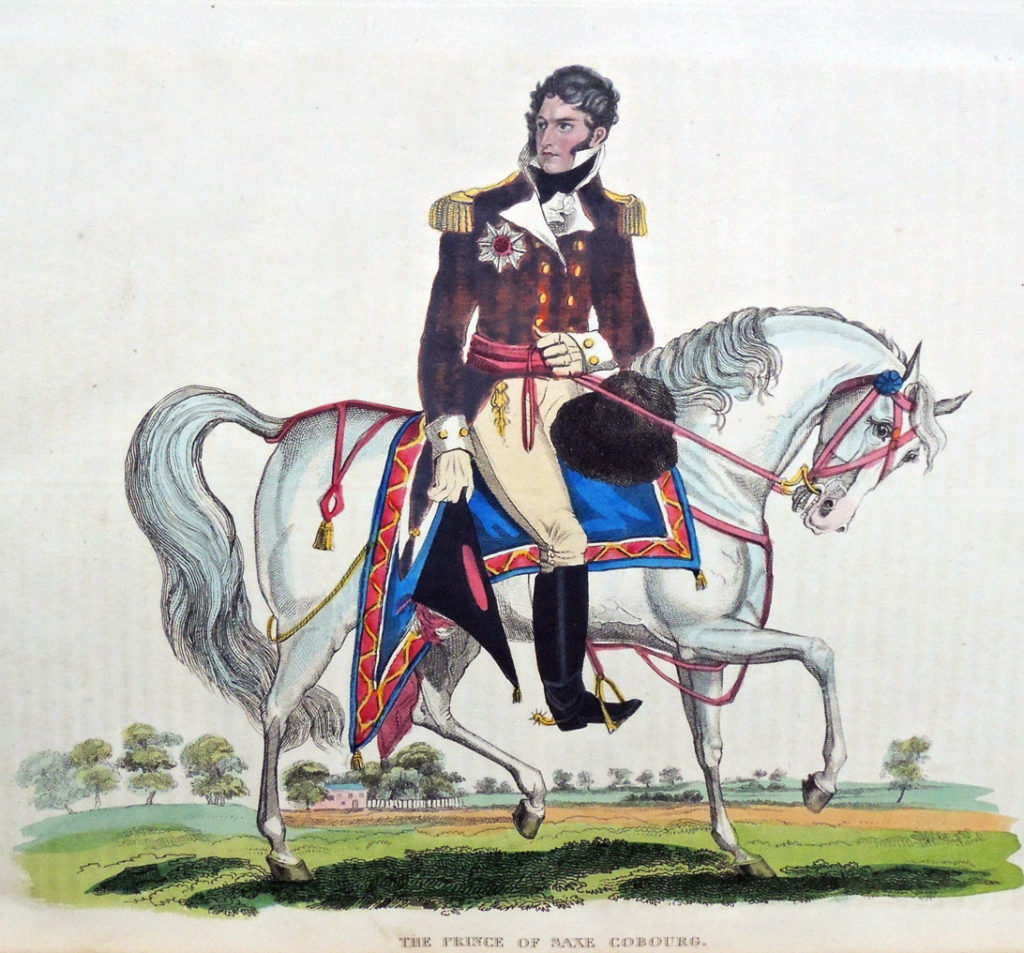 This history of the Napoleonic Wars from a British point of view is noted by some for the first account of a “diving boat” or submarine. Because the author is listed on the title page as L.L.D. [Doctor of Law], it can be assumed he is not the British portrait painter William Nicholson (1781-1844) or the British scientist William Nicholson (1753-1815) who wrote the multi-volume The British Encyclopedia, Or Dictionary of Arts and Sciences. The repetitive equestrian portraits of contemporary world leaders are so far unattributed (list below). 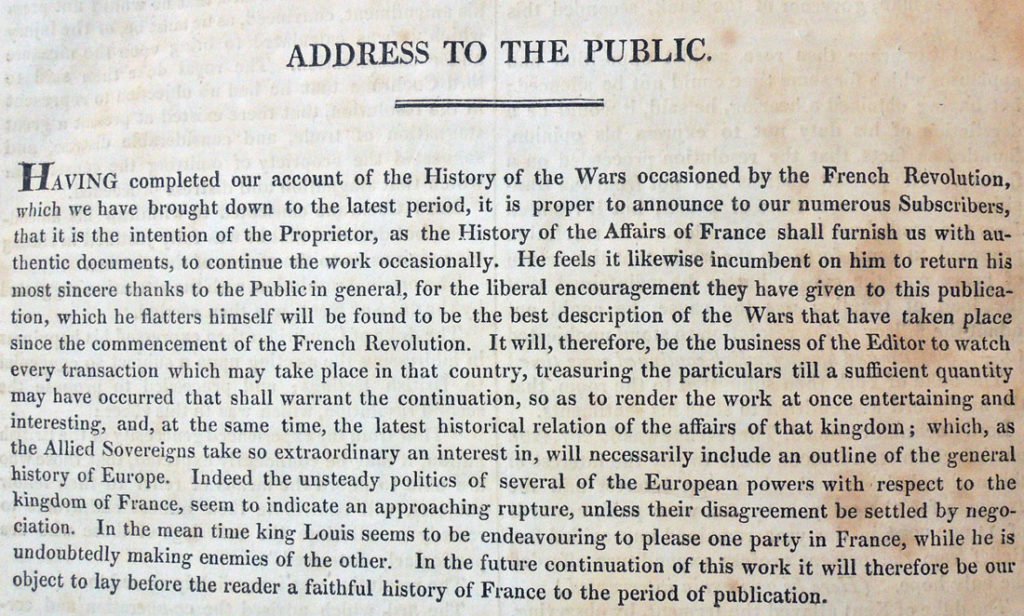 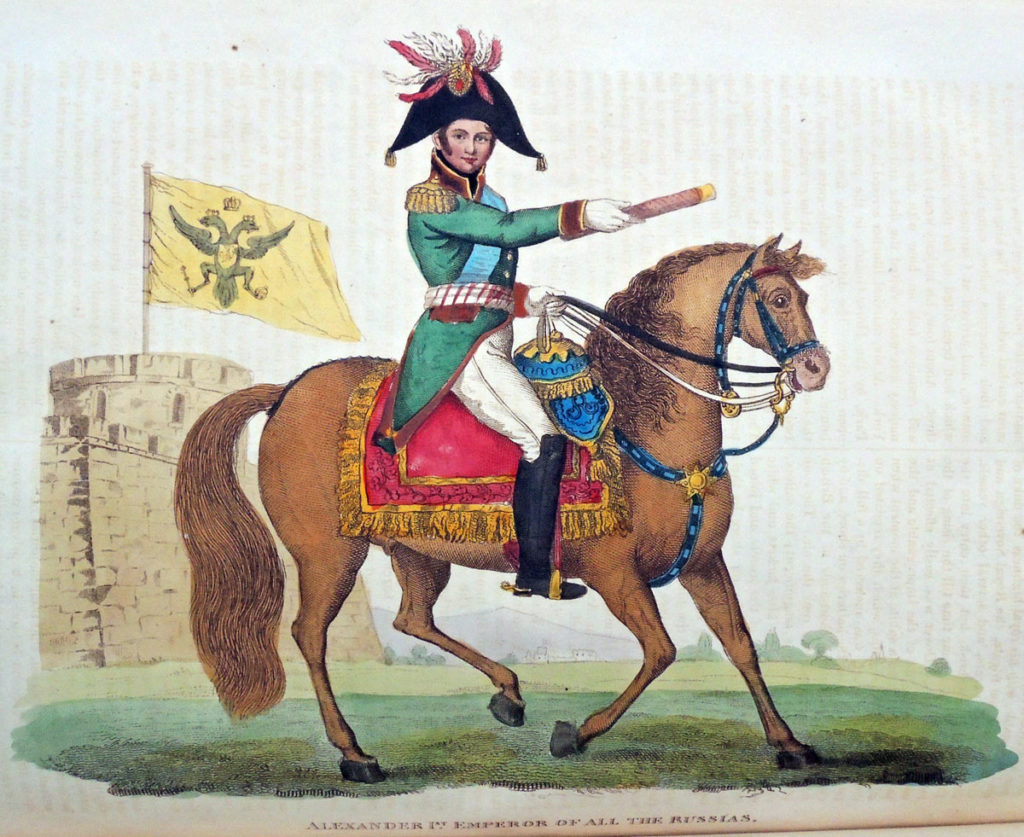 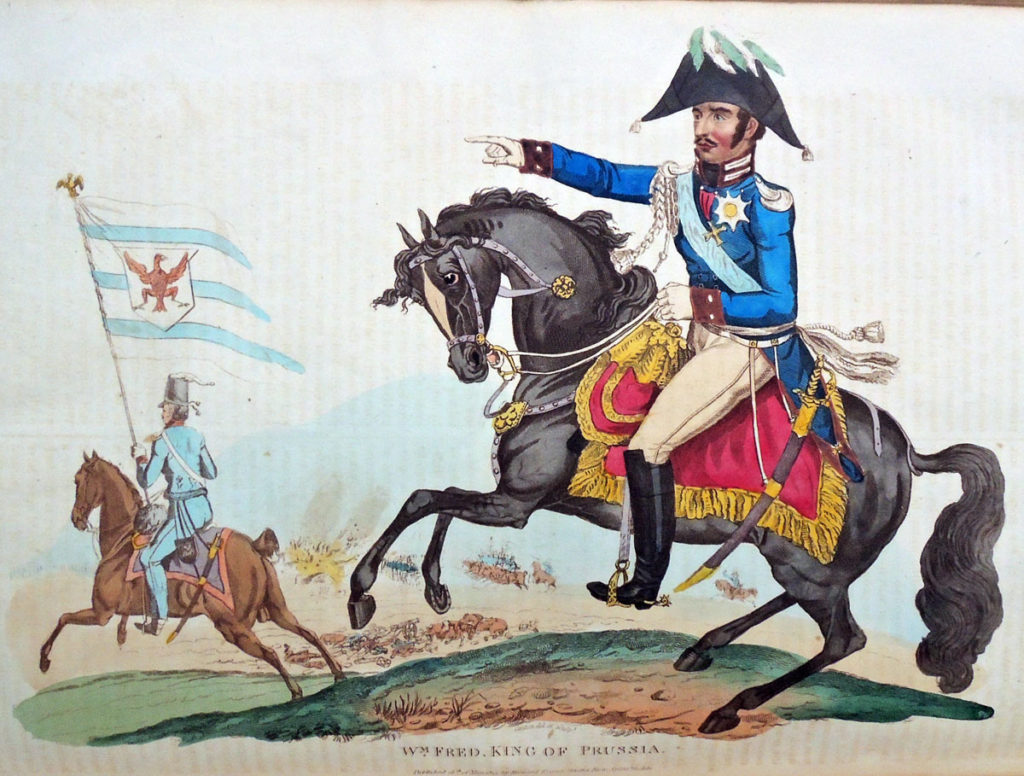 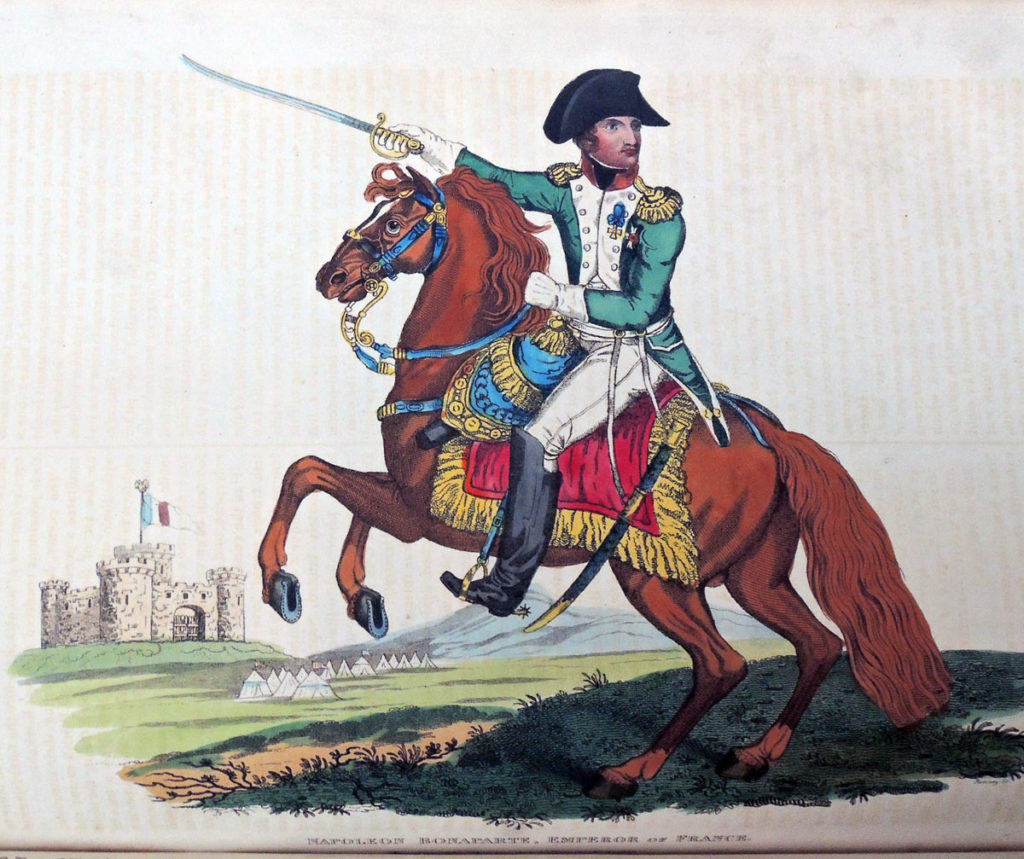 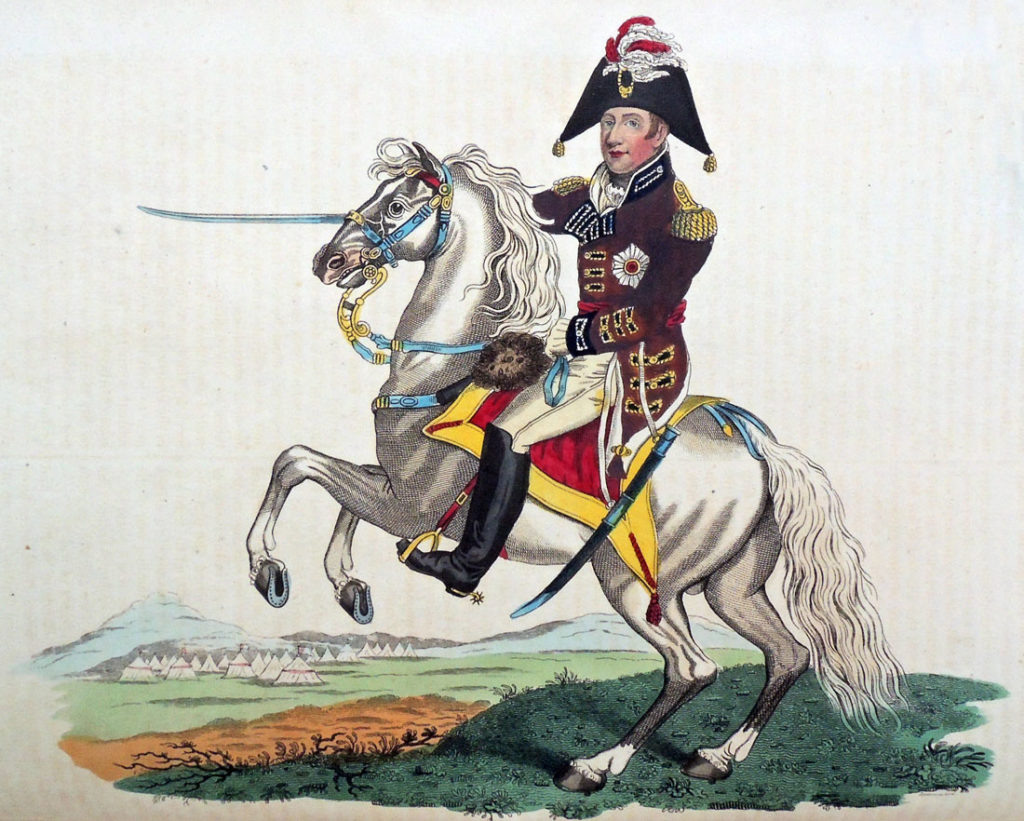