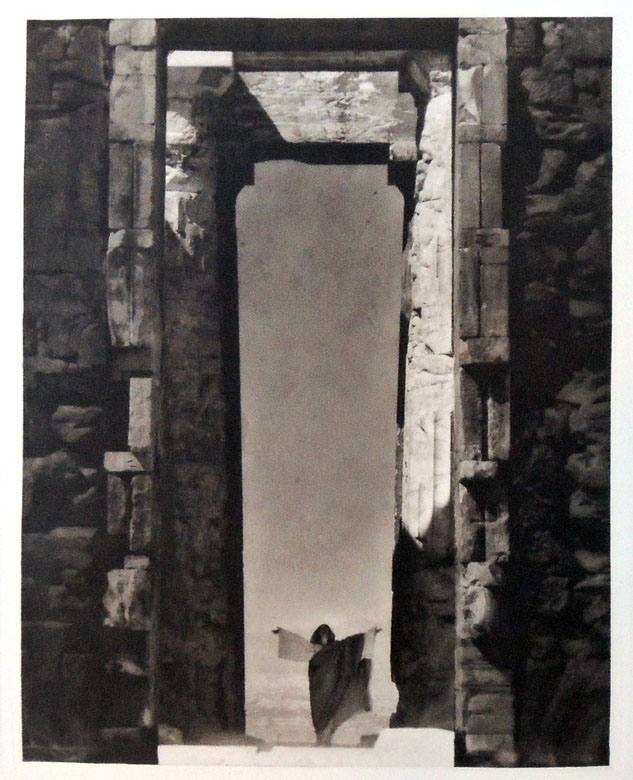 Thrilling news. The Graphic Arts Collection acquired one of the remaining 1981 portfolios, Edward Steichen: The Early Years 1900-1927, published by Aperture in the United States and simultaneously at Saint-Prex, Switzerland by the Atelier de Taille Douce.

Here is a small taste but honestly, there is no digital image that reproduces the true beauty of these hand-inked and hand-pulled aquatinted and chrome-faced copper plates. The complete colophon information is reproduced below.

I asked the master printer Jon Goodman to say a few words about the project. Exerts are posted here and the complete statement can be read here: Jon Goodman steichen 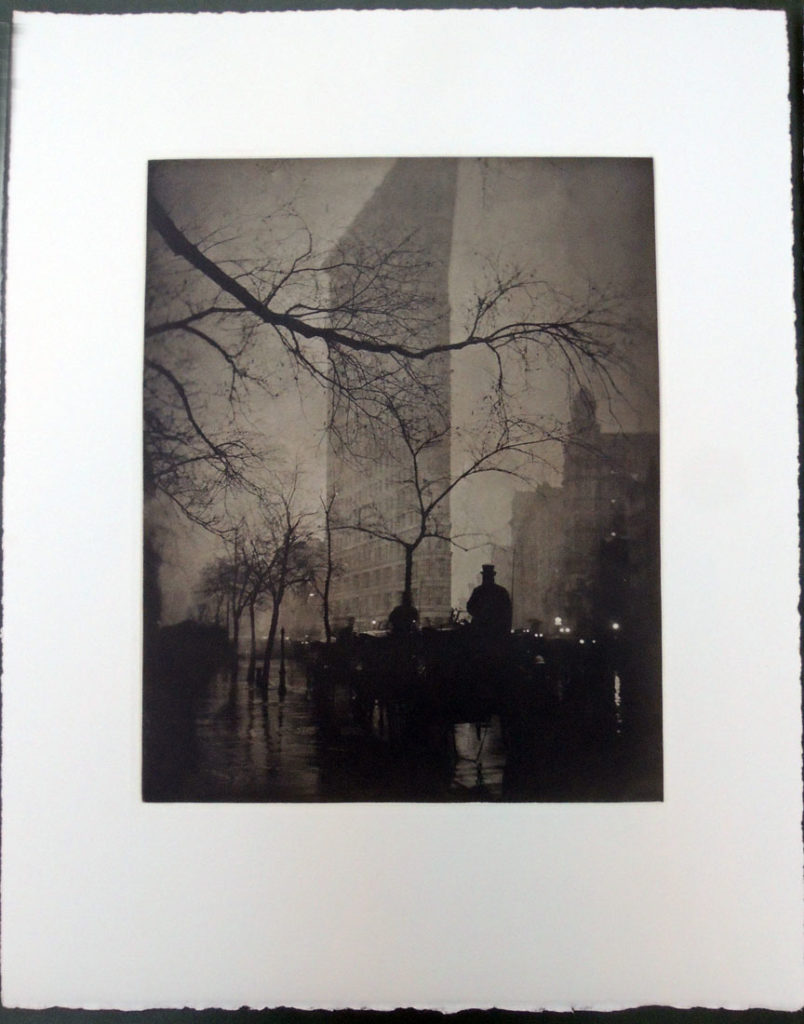 “Edward Steichen: The Early Years 1900-1927 contains twelve photographic images made by means of the Talbot-Klic photogravure process. The chrome-faced copper plates were made by Jon Goodman and Richard Benson in Newport, Rhode Island. Eleven plates were made using the dust-grain technique and one plate (Three Pears and an Apple) using a specially prepared screen. The plates were hand pulled on the presses of the Atelier de Taille Douce of Saint-Prex, Switzerland. The texts by Beaumont Newhall and Mary Calderone have been set in Monotype Bembo and printed by The Stinehour Press, Lunenburg, Vermont, and are signed by the authors. The design is by Wendy Byrne. The edition is limited to one thousand examples and one hundred artist proofs. …This is number 984.” –Colophon 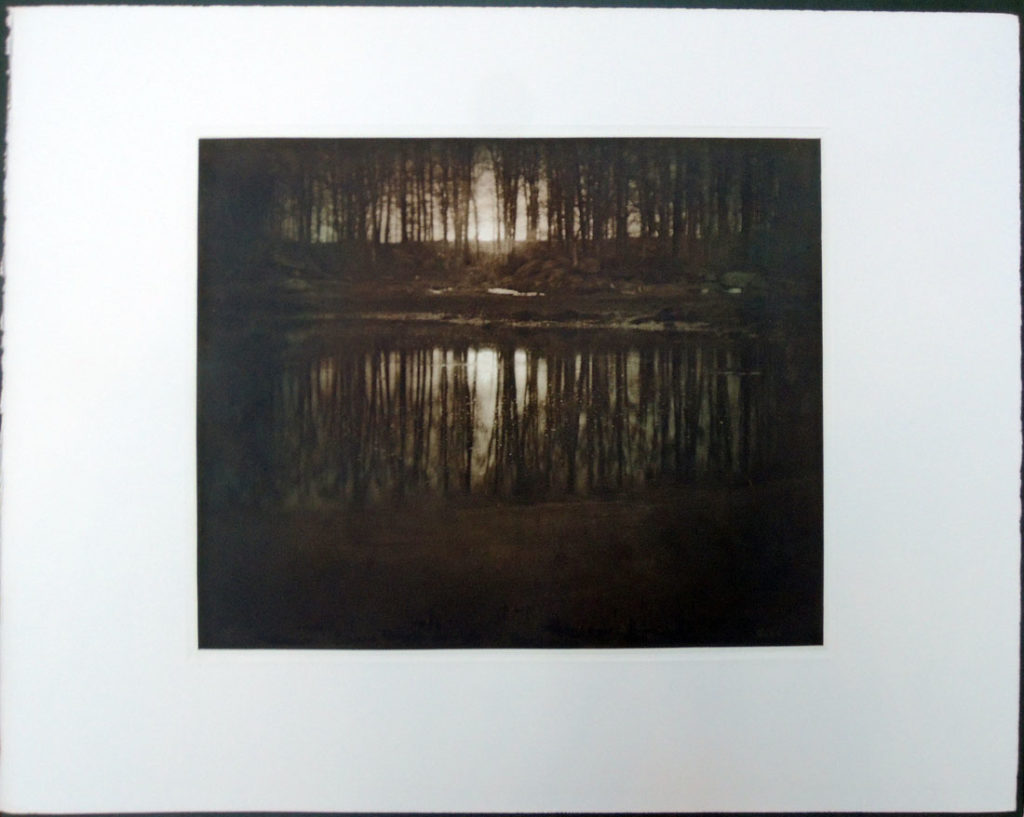 “The Steichen Portfolio was my first big project in photogravure,” writes Jon Goodman. “I started work on it in 1979 (I was 25). But it was a project that predated me. I was told that it was a project that Edward Steichen and Alfred Stieglitz had discussed while both were alive. In 1967 when Paul Strand’s “Mexican Portfolio” was re-editioned by Da Capo press in conjunction with a nascent Aperture (printed by Andersen Lamb Printing Co. of Brooklyn from plates made in 1939 by the Photogravure and Color Co.) Edward Steichen approached Michael Hoffman of Aperture about doing his project. . .”

Goodman continues, “I met with Michael Hoffman in New York in June of 1978 and showed him the work that I had been doing on my research which had primarily been done in Switzerland, first at the Centre Genevoise de Gravure Contemporaine and later at the Atelier de Taille Douce et Lithographie of St. Prex. He was quite interested and spoke to me about a couple of projects but primarily about the Steichen Portfolio which had been languishing for a few years.

Michael Hoffman called Richard Benson in Newport and arranged for me to go and meet with him at his home and studio. Benson had most of the equipment and facility needed to work in photogravure in his shop in Newport. He had an intaglio press that had been purchased with funds provided by Georgia O’Keeffe to make photogravures of Stieglitz’s work. I met with Benson and we arranged that I could come and work in his shop in the fall of 1978 on some of Aperture’s potential photogravure projects.” 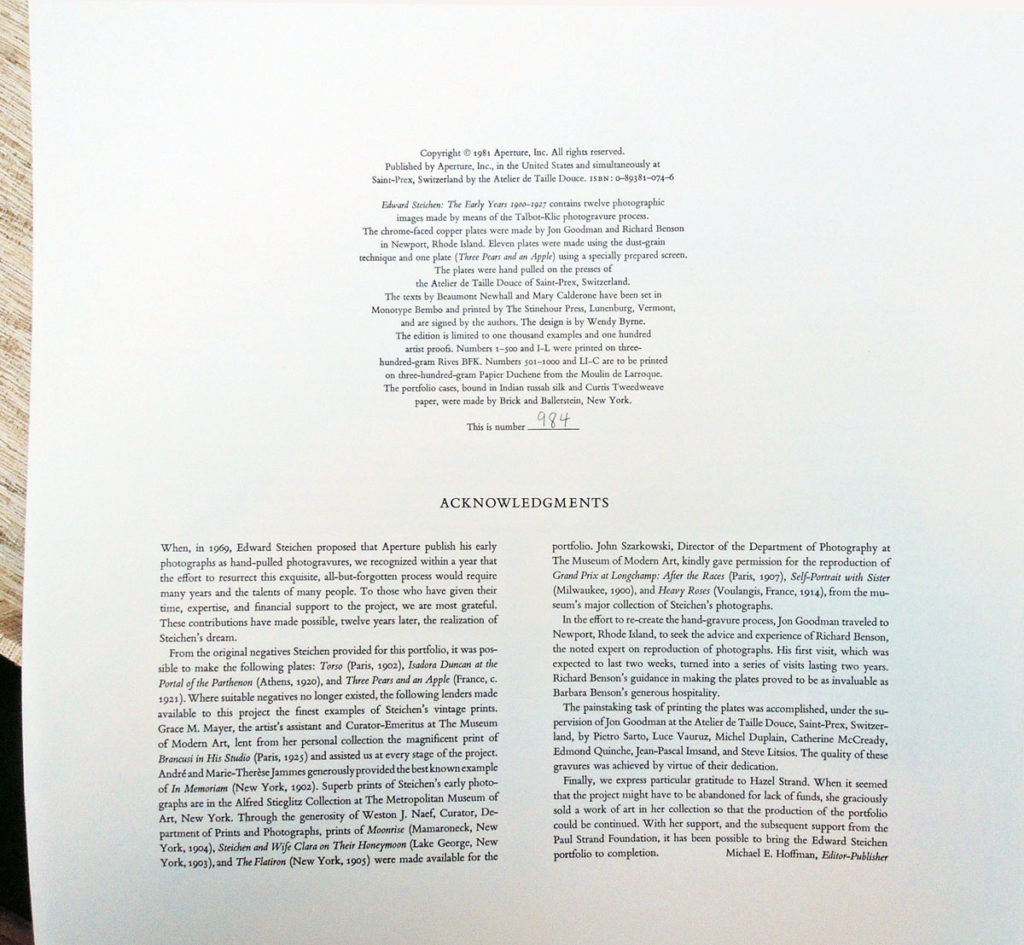 “I returned to Newport in September of 1978 with the purpose of making some initial plates of Paul Strand’s work. I had access to Strand’s negatives through his association with Aperture and Benson had been Strand’s printer at the end of Strand’s life and knew what the images should look like. There was no funding for this work initially. It was thought that I would come to Newport for a few weeks but that turned into 3 years.

The initial Strand plates (“Gaspe’ Fisherman” and “Iris, Maine”) were a struggle. It was one thing for me to take one of my own negatives and make a photogravure plate and print but it was a whole other order of magnitude to take a negative of Paul Strand’s and make a photogravure plate and subsequent print that had a visual equivalency to Strand’s own print from that negative. The Gaspe’ Fisherman was made and editioned for the end of 1978 early 1979. Once it was established that I was a viable worker and able to try to make photogravures worthy of Paul Strand’s work and comparable to the photogravures from the Mexican Portfolio it was decided that we could proceed with the making of the Steichen Portfolio.” 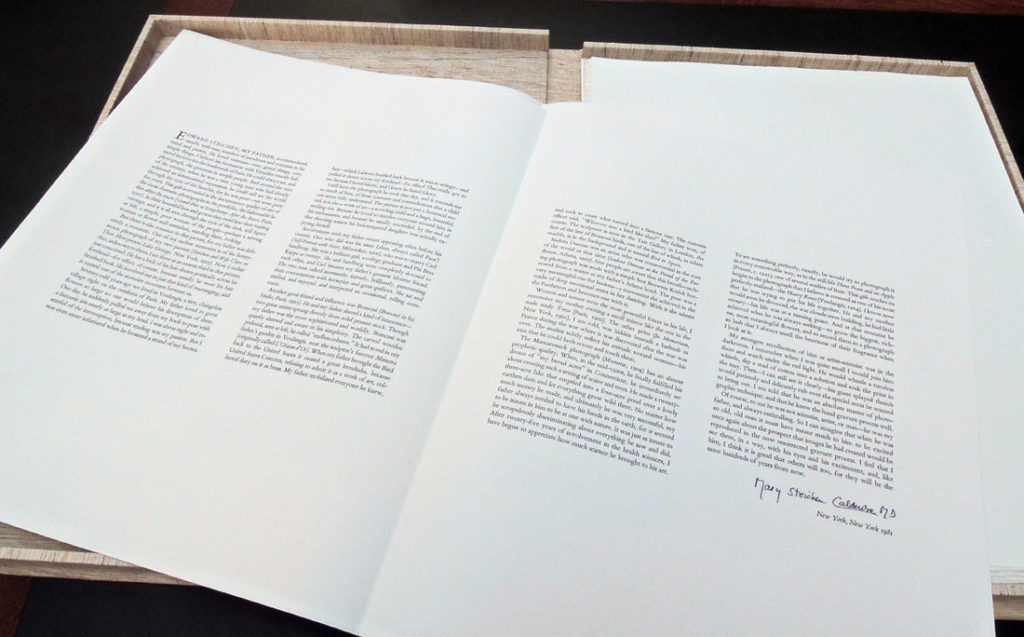 “In the winter of 1979 I was sent to Munich to retrieve the material that had been provided to the printers there (Steichen’s printer had passed away by then). I had with me the “Iris” plate that I had made that fall in collaboration with Richard Benson. I asked the printers in Munich to make some proofs of that plate to take back to New York. I then went on to St. Prex Switzerland where I shared the work that I had been doing with my friends at the Atelier de Taille Douce and asked them to also proof the “Iris” plate in their manner of working.

I then took both sets of proofs of the “Iris” back to New York to show to Michael Hoffman. The difference in quality between the proofs made at the Atelier de Taille Douce and those from Munich was quite striking. There is a smoothness and a freshness to the photographic tones in the Atelier proofs while the Munich proofs were cottony and muddy. It was decided that the Atelier should edition the “Iris” plate while I went on to the making of the plates for the Steichen Portfolio.” 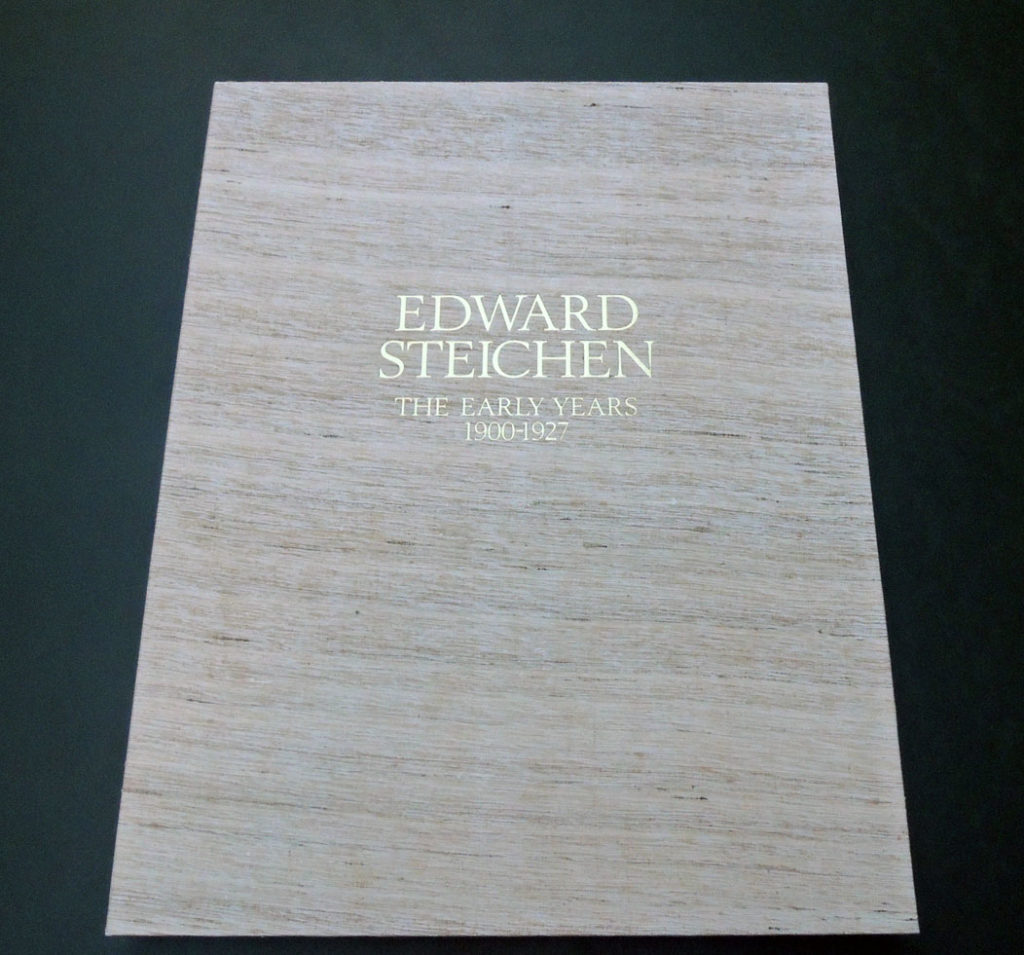 “It took me a full 12 months to make the 12 plates that are in the Steichen Portfolio. I learned a great deal in that time, multiple plates were made for each image before a satisfactory plate was accomplished. Then multiple proofs were made for each image, in different inks, varying both the transparency and the ink color for each. In the end after a great deal of deliberation we established the “bon a tirer” for each plate, which I then took back to the Atelier de Taille Douce in St. Prex.” Continue reading Goodman’s account here: Jon Goodman steichen